WEST OLIVE — A week after a slate of conservative activists assumed office as newly-elected commissioners of Ottawa County, their house cleaning efforts continue.

On Tuesday, county commissioners voted 6-5 to hire the Kallman Legal Group, a conservative law firm, whose attorneys filed suit to void the 2020 election and fought COVID-19 pandemic regulations. The vote came amid conflict of interest claims and transparency concerns from other commissioners and the public.

The hire was approved without a competitive bidding process — one required by the county’s purchasing policy — and despite concerns that state records indicate commission chair Joe Moss is a business partner with the brother of two Kallman attorneys.

The Tuesday decision came the day after Allendale Public Schools Board of Education hired the same firm over objections from some board members that the decision was rushed.

Rates increase if Kallman represents the county in lawsuits.

Ottawa County has always been one of the most conservative in Michigan, and the new board consists of 10 Republicans and one Democrat. Eight of the 11 commissioners are newly elected members backed by Ottawa Impact — a grassroots activist group co-founded by Moss and Sylvia Rhodea, who also serves as an Ottawa County commissioner.

The group challenged Republican incumbents who ran on low taxes and small government. It endorsed a slate of candidates who instead championed cultural issues such as increased parental control over school curriculums.

The new board first publicly announced it was considering Kallman as the county’s legal counsel at its Jan. 3 meeting.

During the same meeting, the board fired former administrator John Shay and replaced him with John Gibbs, who worked in the administration of former President Donald Trump and later received Trump’s endorsement in an unsuccessful congressional bid. Gibbs now makes an annual salary of $210,000, the same as his predecessor John Shay, according to a copy of his contract.

Board members also changed the county motto from “Where You Belong” to “Where Freedom Rings.”

None of the decisions was placed on the public agenda ahead of that meeting.

On Tuesday, some commissioners said they wanted an open bidding process. Commissioner Doug Zylstra, the lone Democrat, moved to hire Kallman Legal Group until Feb. 28 to allow time for competitive bidding, but it was defeated by a 6-5 vote.

Under Ottawa County procurement rules, any purchases above $20,000 must go through a competitive sealed bidding process or a request for proposal. Each process requires advanced public notice.

Contracts can be awarded without the bidding process if it’s a “sole source” contract — meaning there is only one vendor qualified to do the job — or if it’s an emergency where there is a threat to the public welfare, health or safety, or doing so is “in the county’s best interest,” according to the rules.

Commissioners Rebekah Curran and Jacob Bonnema, who were both backed by Ottawa Impact but voted for an open bidding process, told Bridge Michigan on Tuesday they only learned that Kallman was being considered for the position during last week’s meeting.

“I don't believe we received any type of credentials or resume from (Kallman),” Curran noted Tuesday at the meeting. “We need to take the time … to ensure that we are not making rash decisions and that we are all part of the decision-making process.”

Bonnema said opening the position up for bids is “good governance.”

Moss and Rhodea — chair and vice chair of the board — both declined to comment Tuesday when asked by Bridge about the process.

Moss told Bridge the question sounded like “you’ve already drawn a conclusion.” Rhodea told Bridge her election as a public official “doesn’t mean that I need answer all questions.”

Some commissioners and residents also questioned whether Moss should have recused himself from voting for Kallman’s hiring due to a potential conflict of interest.

Moss is listed as the treasurer of Jenison-based company Freshphone, according to state filings. Joel Kallman — president of the company — is related to David Kallman and Stephen Kallman, two major attorneys at Kallman Legal Group, The Holland Sentinel reported.

Kallman also works as an employee or owner of Eclarian and Afterburner, two of Moss’ businesses, the newspaper reported.

“I believe he should have recused himself from the vote (to hire Kallman),” Curran told Bridge.

Moss, Rhodea and Gibbs all told Bridge there was no conflict of interest that warranted a recusal but declined to elaborate why.

Jack Jordan, an attorney with Kallman Legal Group, told Bridge a business relationship “does not necessarily translate to a conflict of interest.”

“If … his business partner gave him money specifically and said: ‘Here, I want you to do this for me in terms of a contract that I have with the county,’ then it would be a conflict of interest,” Jordan said.

The definition of “conflict of interest” in Michigan state law varies among departments.

Under the state’s standards of conduct for public officials, public servants must not “participate in the negotiation or execution of contracts” if they have a “financial or personal interest” in the business receiving the contract.

Moss’ relationship with Kallman, the lack of open bidding process as well as the board’s swift Jan. 3 decisions sparked protests from some county residents, while others cheered on the board for keeping their campaign promises.

More than 500 comments were submitted to the county following the Jan. 3 meeting, with some expressing anger toward the board’s decisions and others praising the new commissioners. 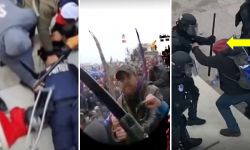 Two years after Jan. 6 riots, 11 convictions (and some regrets) in Michigan