JAMESTOWN TOWNSHIP – Library millage campaign signs are almost as thick as the leaves on lawns in this Ottawa County township, where voters on Tuesday will once again decide whether to fund their public library, or risk it closing its doors following a dispute over a few LGBTQ-themed books.

Residents defunded the Patmos Library in August, when voters angry about books some felt were “grooming” children to be gay helped defeat a tax request. That millage provides about 85 percent of the library’s budget.

It was believed to be the first time a Michigan public library had lost taxpayer support because of a controversy about LGBTQ books.

The tax request is back on the ballot Tuesday, along with a slate of library board candidates who want to keep the books out of the hands of children and teens.

With just days before the vote, lawns in the township aren’t dominated by yard signs for gubernatorial candidates but by “yes” and “no” library millage signs. Leaders of campaigns on both sides of the issue say they aren’t sure how the vote will turn out.

“It could go either way,” said Dean Smith, chair of the township planning commission and treasurer of the vote no campaign. “The only voice the common person has on the issue is to vote.”

The community of 10,000 is conservative, even for a county that is considered one of the most conservative in Michigan, favoring former President Donald Trump by a margin of 76-21 percent in 2020.

Smith argues the community library should reflect the conservative community it serves. 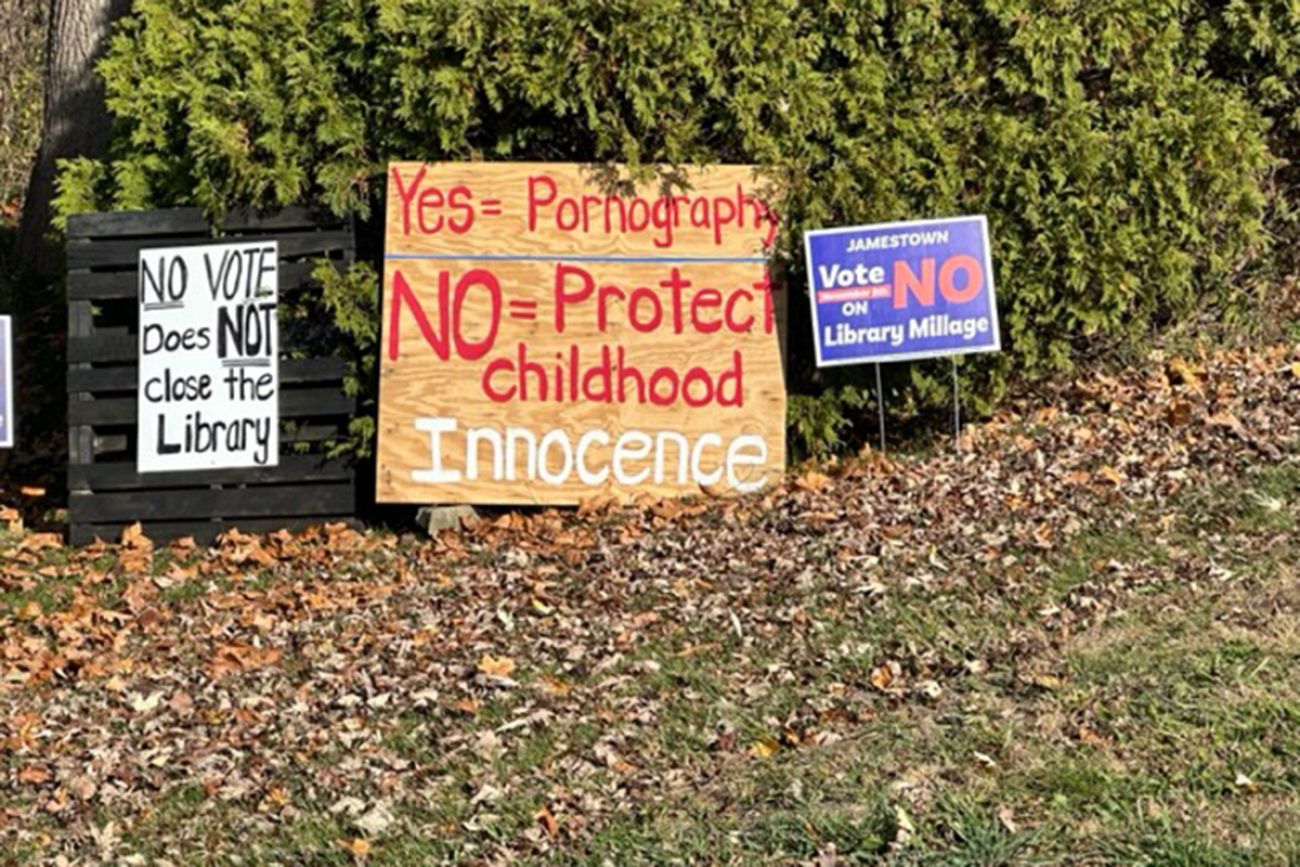 Some residents in this conservative community are angry over several young adult graphic novels with LGBTQ themes. (Bridge photo by Ron French)

Some in the community, though, see a danger to that kind of thinking.

Retired teacher Linda Wainwright has lived in Jamestown Township for 40 years, and volunteered at the community’s library when it was just a room in the back of the fire station. She said she is saddened by the controversy, which she believes has ramifications far beyond a handful of books that were seldom checked out.

“I know there are well-intentioned people who want the library to close. I honestly believe they think they're doing a good thing by protecting the rest of us,” Wainwright said.  “But they haven’t read their Constitution recently.

“I guess I've taken it personally that there are people in my community, my neighbors, who want to deprive me of the right to make my own choices about what I read and think, and they want to take everything else in the library away, too.”

A “vote no” campaign was organized by residents upset by several LGBTQ-themed graphic novels on the young adult shelves of the library. One, “Gender Queer: A Memoir,” is the story of the author’s coming of age as nonbinary, and includes illustrations of sex acts. Several other books targeted by residents, including “Kiss Number 8” and “Spinning,” are stories of teens in same-sex relationships, but do not include illustrations of sex acts.

The library refused to remove the books, but did move “Gender Queer” behind the counter, so patrons would have to request it.

Patmos Library Director Amber McLain resigned this spring over the demand from some residents to remove books, telling Bridge she had been harassed online and accused of indoctrinating children.

In August, the millage vote lost in a landslide, 62 percent to 37 percent. That 10-year millage request was both a renewal and an increase, and if passed, would cost the average township homeowner $155 a year. The millage request on Tuesday’s ballot is the same.

Leading up to the August election, library supporters spent about $1,000 for their campaign; this time, the Citizens for Patmos Library have raised $50,533, and had spent more than $12,000 by Oct. 23 on mailers and signs, according to campaign finance filings.

Library Board President Larry Walton said there were plans to spend more in the last few days before the vote, with another mailer going to residents and a public relations firm in Grand Rapids coordinating a text-message campaign to get out the vote.

“I’ve had a number of people who said they voted no (in August on the library millage), not realizing the ramification of it, and they were changing their vote (Tuesday),” Walton said. “Communicating is No. 1 right now, letting people know the library will close without this (millage).

“We know this will be a close race, so we gotta tell people if you want the library to stay open you gotta come out and vote.”

Without taxpayer support, the library can stay open until the fall of 2024, thanks to the GoFundMe campaign. If the tax is defeated, the library is likely to cut back its hours immediately to save money, he said.

“No one wants the library to close,” said Smith, the treasurer of the vote no campaign. “But we don’t want parents to take their children to the library and their children happen upon this (LGBTQ reading material), and then they have to have a conversation (about sexuality) years ahead of when they want to.

“Gender Queer” is one of the most banned books of 2022, but it’s not unusual for the book to be available in public libraries.

Even though “Kiss Number 8” and “Spinning” are not explicit in their language or illustrations, Smith said he is still uncomfortable with those books being on shelves.

“I’m not for a ban. We live in a pluralistic society, but, for my taste, I’d put (LGBTQ books) in a drawer or put it in a special file cabinet.”

The polarization of what has been a close-knit community over the book controversy saddens Wainwright, the retired teacher.

On Wednesday, she put up a large sign in front of her home, encouraging people to “Google 1st Amendment (and) Intellectual freedom before voting library millage.” 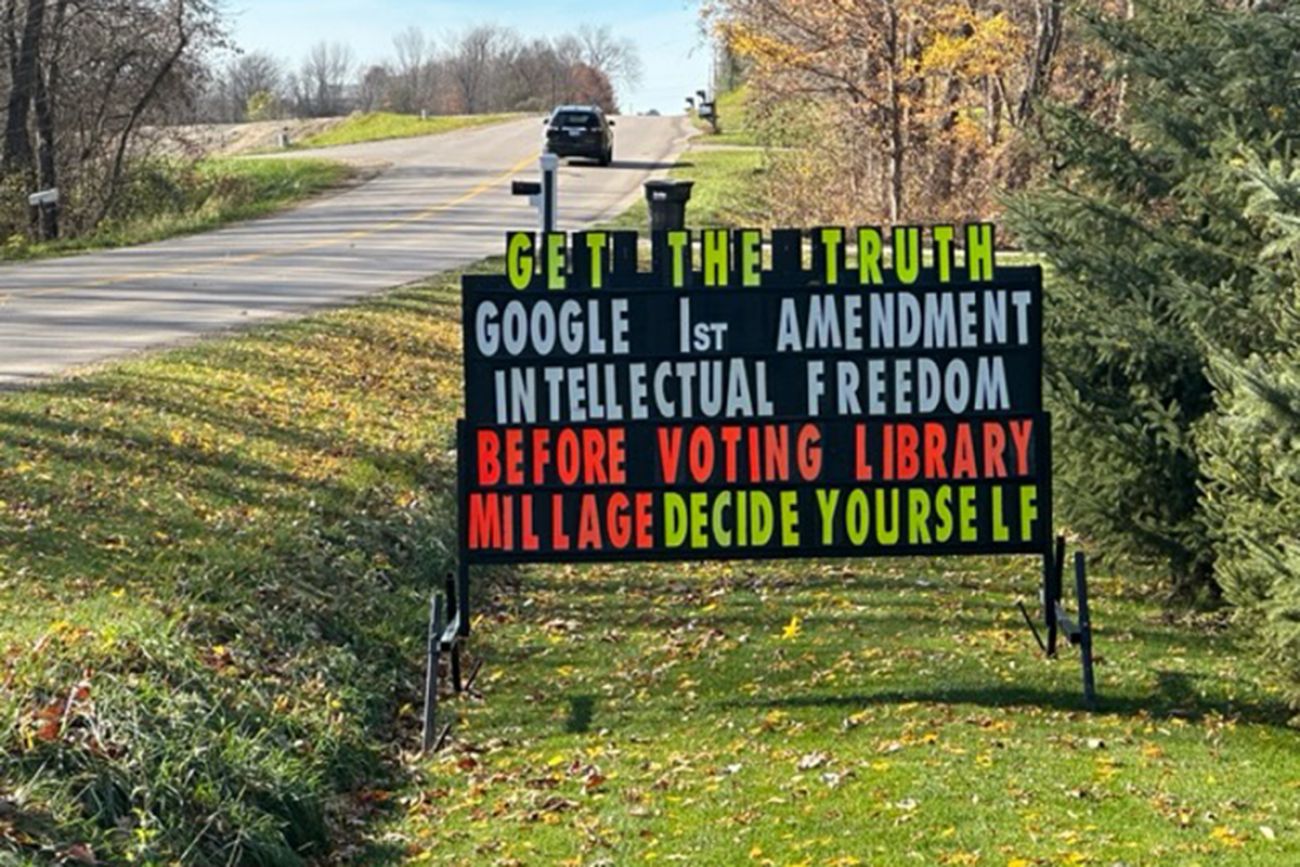 Retired teacher Linda Wainwright, who put this sign in front of her home, isn’t happy with the controversial books but says closing the library is the wrong move. (Bridge photo by Ron French)

Wainwright said she is a Christian and is personally bothered by the content of the challenged books, but defunding the library would hurt the community.

For Wainwright, the issue facing Jamestown goes far beyond the fate of the train depot-themed library.

“This is more than a disagreement about the library. This is about community and respect for each other,” she said.

“We’re just at loggerheads. I feel like I have lost something very precious, and that is regardless of how the outcome is on the millage.”