Conservative school board candidates who attacked public schools as incubators of “woke” ideology made inroads in local Michigan elections on Tuesday, but still lost far more races than they won.

How we reported this story:

Reporters examined election results for Get Kids Back to School PAC-endorsed candidates and Michigan candidates endorsed or recommended by Moms for Liberty. Some candidates were endorsed by both parents rights groups.

We used unofficial county vote data to determine if candidates won their races. In five races, we were unable to identify a winner because of ties, delays linked to the process for counting, or write-in ballots.

Many of the races were unusually combative, stoking fears that hyper-partisan discourse over LGBTQ inclusion, patriotic education and parental rights would interrupt the essential — if staid and generally apolitical — workings of local boards. Some candidates built their campaigns on national Republican talking points about critical race theory and educators’ “indoctrination” of students.

The Get Kids Back to School PAC, a new political group, endorsed 57 candidates. Many voiced opposition to alleged “indoctrination” or promised to resist COVID vaccine mandates. About two thirds of the candidates lost, the analysis showed.

Moms For Liberty — a national conservative group with 12 local chapters in Michigan that aims to help parents “defend their parental rights” — was more successful. Still, fewer than half of the 73 candidates recommended by the national group or its local affiliates won their races. (Some candidates were endorsed by both groups.)

Though results were mixed, Matt Wilk, director of the Get Kids Back to School PAC, released a statement Wednesday saying its “army of volunteers has changed the narrative around public education.”

Don Wotruba, executive director of the Michigan Association of Schools Boards, agreed that the arguments of these groups — often summarized by the phrase “parental rights” — likely won’t disappear after this election.

“This is a continued conversation that we’re going to see in the school boards in Michigan for at least one more election cycle,” he said. “This is an issue that districts are trying to address and trying to be transparent.”

Indeed, the election comes as the city of Dearborn braces for what could be another raucous school board meeting focused on LGBTQ-themed books in school libraries that some residents cast as pornographic. The meeting is scheduled for next week in a 600-seat auditorium.

Republican candidates for statewide office rallied in Dearborn in recent weeks, joining a national strategy to build political momentum on parent protests against schools. Stephanie Butler, an activist and Dearborn parent who was instrumental in the library campaign, launched a write-in campaign for the city’s school board. (She lost.) 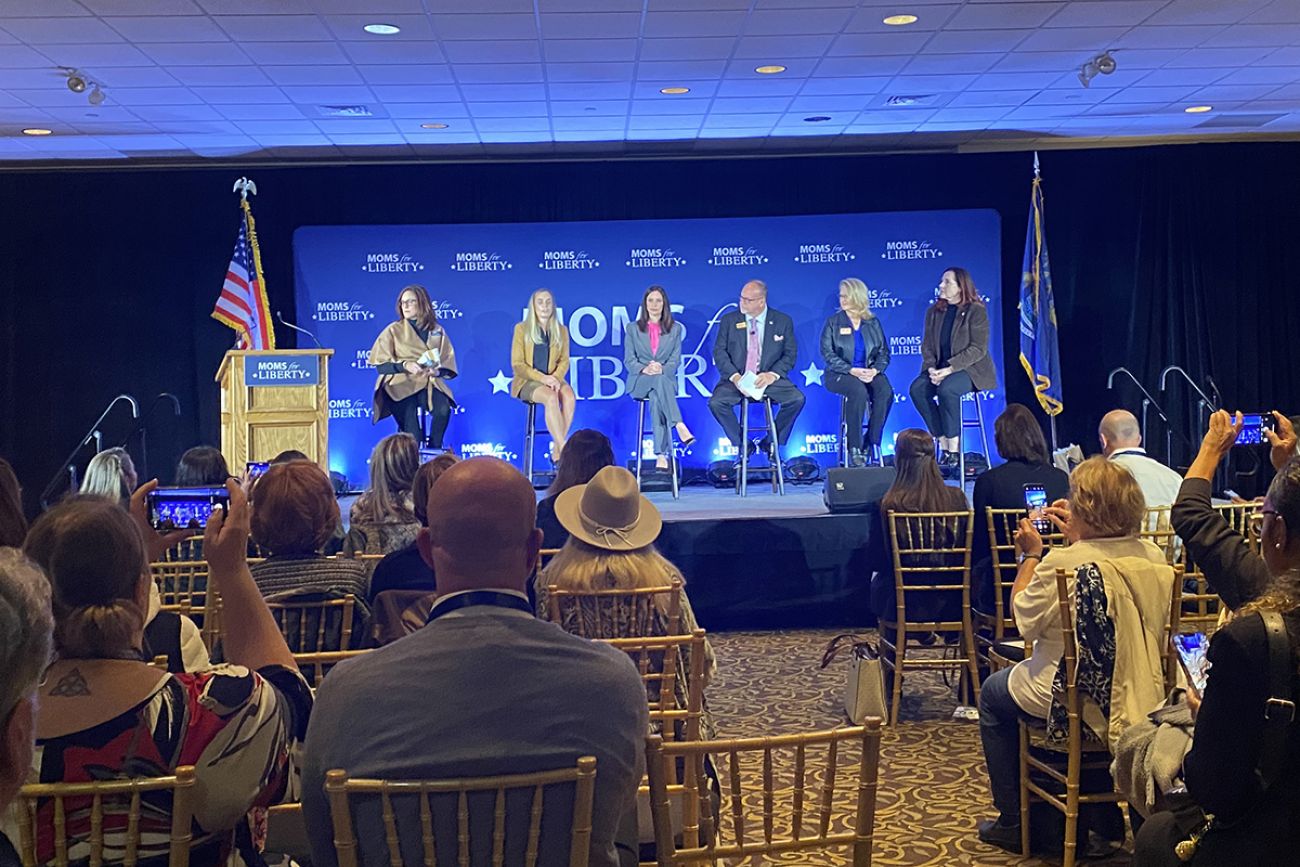 Moms for Liberty, a national group that aims to help parents “defend their parental rights,” hosted an event in Troy in mid-October.

“If there's one thing you do right now, go out into your communities, figure out who's running for school board, talk to them, see what they stand for, ask them if they stand for fundamental parental rights.”

But in the aftermath of Tuesday’s election, the movement’s success appears limited.

The hard-edged attacks on public schools also didn’t appear to play well in state level education races: Democrats swept contested races for seats on the State Board of Education and the governance boards of the University of Michigan, Michigan State University and Wayne State University.

While local school board races are nonpartisan, parental rights candidates also may have been hurt by results in partisan races and proposals further up the ballot; notably, Proposal 3, the ballot measure that enshrines abortion rights in the Michigan Constitution, which helped drive progressive voter turnout Tuesday. Conservatives had a rough night, as Democrats dominated statewide races and took control of both chambers of the legislature for the first time in 40 years.

“The issue that ended up defeating me was my non-support for a $555 million millage that the Troy School District put on the ballot,” said Jeff Schaeper, a GKBS-backed candidate for Troy school board who lost on Tuesday.

But he said he believes conservative voters will turn out for future board elections as they learn more about what he says is “age-inappropriate sexual material” being taught in schools.

“I don’t want to say (voters) are okay with the status quo, but I think they’re unaware, because if they knew what was happening, they’d be outraged,” he said.

Across the state, parental rights candidates made gains in suburban districts with majority white populations and relatively low levels of child poverty. Candidates backed by conservative groups won four seats in Cedar Springs, three in Walled Lake and Comstock Park, and two each in Huron Valley and Portage.

In some of districts where conservatives made gains — notably Rochester and Walled Lake — voters were aggravated by schools that insisted on mask mandates or pushed back against protesters, in one case reporting them to their employers.

“It’s clear based on these results that (conservative candidates) only speak for themselves and a small minority of vocal political extremists,” said Thomas Morgan, a spokesman for the Michigan Education Association, the state’s largest teachers union, which recommended 330 school board candidates statewide.

“Everyday people voted to put school board members in office who will work on solving the real issues facing schools.”

Gov. Gretchen Whitmer told Bridge Michigan before the election that some comments by people within the parental rights movement are designed to be divisive. During the campaign, she was somewhat sympathetic to calls to reinforce parents’ rights in schools. The state now requires school districts to publicly post excerpts of a 1976 law that affirms parents’ rights to direct their children’s education. Whitmer also created a parents council during her campaign to advise her administration on K-12 issues.

Transparency is a priority for conservative board candidates who won on Tuesday. Many are parents and political newcomers who complained that districts ignored their concerns about curriculum choices and that, too often, they were left in the dark on the lessons and reading materials used in classrooms.

In Forest Hills near Grand Rapids, 10 people ran for three full-term school spots. Competing groups offered their own slate of candidates: One group focused on “parental rights” and “curriculum transparency,” while the other said it opposed “partisan and manufactured attacks” on public education. In the end, voters chose one parental rights candidate and two candidates from the opposition group.

Holly DeBoer, supported by local parental rights group Forest Hills for JUST Education, earned one of the board positions. She now becomes “kind of the eyes and ears for the parents for the group that is really pushing for parent voice and parent choice,” said Stefanie Boone, a leader of the group.

Boone said she feels there will be progress made in removing books she deems “obscene” or “pornography.”

“If we’ve got some windows open to some transparency and communication with the district — and I feel like we have that — then there’s options to work together,” she said.

Becky Olson, a co-founder of the group Support Forest Hills Public Schools, which is critical of the parents rights movement, said she hopes the community can come together after the election. It’s time to “let teachers teach” while boards govern and parents help children learn, she said.

”I think that nobody wants political schools,” Olson said. “I think that was a universal realization in this, and that it's truly about the best interests for our kids and not bringing politics into our schools.”

The parental rights movement has gained national attention in recent years as Republican gubernatorial candidates all the way to local school board candidates claimed parents' voices were being left out of school decision-making. In Michigan, candidates first campaigned against extended COVID-19 school closures during the height of the pandemic. They later expanded their focus to object to how race, history and other topics were taught and to district efforts intended to make students of color and LGBTQ students feel included and safe.

Wilk’s PAC hosted a “Mama Bear/ Papa Bear” ice cream social. Local chapters of Moms for Liberty have also gotten involved in local school board races. The national group, which was founded by former Florida school board members, hosted a “Giving Parents a Voice” town hall last month in Troy that drew school board candidates, Republican leaders and other attendees. 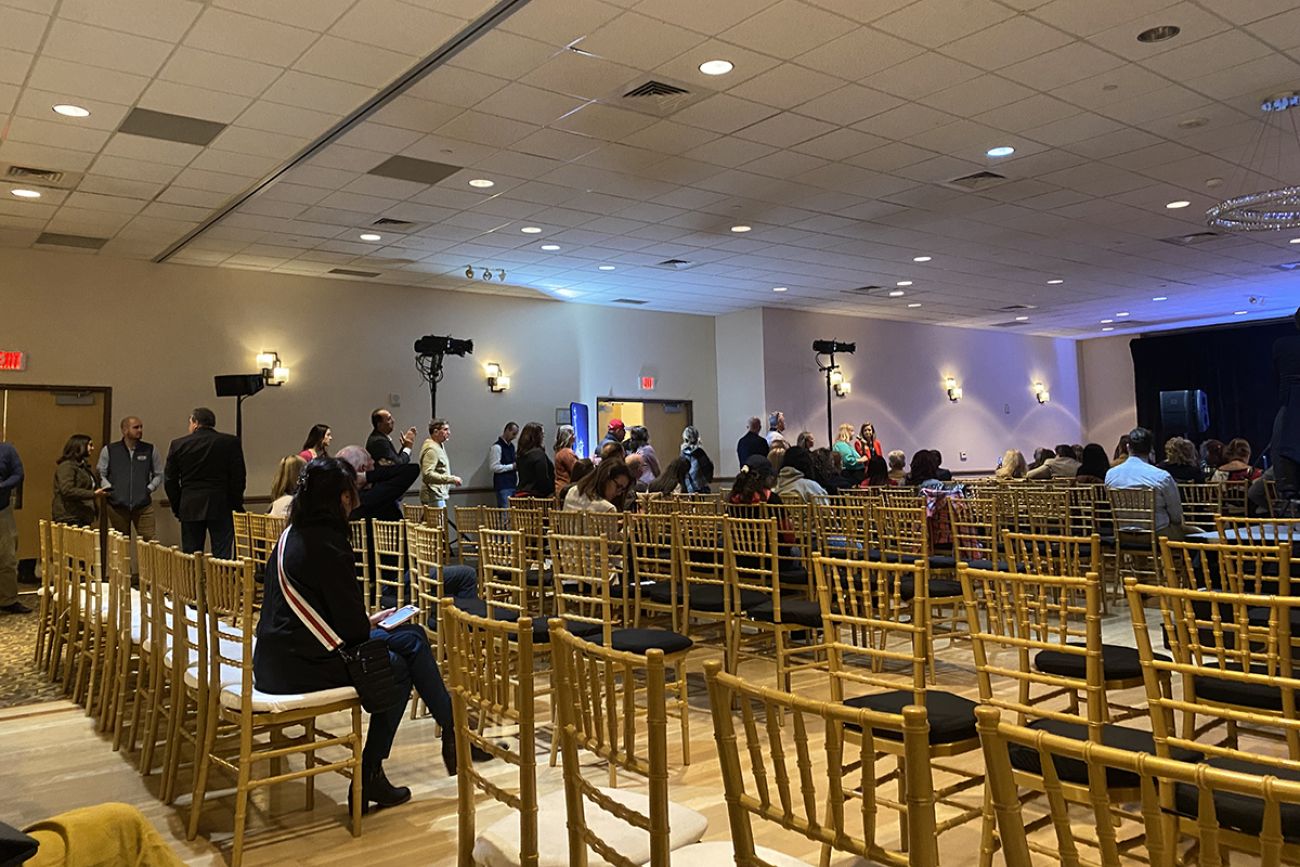 Moms for Liberty hosted a “Giving Parents a Voice” town hall in Troy in October. Several attendees lined up to ask questions about public schools to panelists. (Bridge photo by Isabel Lohman)

Still, some candidates backed by Wilk’s PAC say they won office by eschewing the confrontational politics of many of their peers and focusing instead on traditional education issues like improving test scores and strengthening their districts’ finances.

“We stayed away from the culture war stuff, the book banning and the CRT,” said Shayna Levin, who won a seat in Walled Lake in western Oakland County along with two candidates endorsed by Get Kids Back to School PAC.

“Those aren’t overarching concerns for Walled Lake. I didn’t go on my website and start saying conspiracy theories.”

Levin’s first priority for her tenure? Insist, for the sake of transparency, that board meetings be recorded on video and streamed online.