Michigan desperate for Pre-K educators. And pays them poverty wages.

Cindy Lester calmly sat down on the child-sized couch with the 4-year-old who had been careening around her classroom all morning. He’d just flipped an empty soup bowl onto his head.

“You have a lot going on inside you today,” she said. “What’s going on? Are you tired?”

To a lot of teachers, a high-spirited boy like this one might seem like a problem — the sort of child who might spend preschool in timeouts, then graduate to the elementary school principal’s office. He might fall behind academically, his curiosity and creativity putting him at odds with classroom rules.

But Lester is determined to create a different future for this child and his classmates at Children of the Rising Sun Empowerment Center in Detroit. She devotes herself to that mission 10 hours a day, masterfully defusing tantrums, tying and re-tying shoelaces, and coaxing a roomful of 4-year-olds to sit relatively still for lessons in phonics and math.

Michigan leaders say the state desperately needs more skilled and committed teachers like Lester to prepare young students for the crucial transition to kindergarten. Gov. Gretchen Whitmer has warned that if the state can’t recruit enough early educators, that could impede her plan to offer free preschool to all Michigan 4-year-olds by the end of her first term.

One big reason? Salaries for preschool teachers are extremely low.

Lester is deeply devoted to her job, but she’s also a mom burdened by long hours, a small mountain of credit card debt, and by the constant worry that the next rent payment may be out of reach. Spend a day in her classroom and it’s clear why some might be unwilling to take the path she has chosen.

“Wages are actually comparable to animal care workers and fast food workers,” said Tiffany Tilley, a member of the Michigan board of education. “Some of them are on public assistance. Teachers are drastically underpaid.”

Preschool teachers in Michigan make an average of $14 an hour, she said. If, like Lester, they don’t have a bachelor’s degree, it goes down considerably. She makes just $11 an hour  and gets no health insurance.

Those wages put Lester, a single mother of three, well below the poverty line, making it hard to survive. She is her family’s sole breadwinner.

“Either you’re here for a paycheck or you’re here because you love what you do,” she said. “I just have to make sacrifices.”

Lester’s boss said she wishes she could pay her staff better.

“I’m not even able to pay them livable wages,” said Zina Davis, director of the center where Lester works. She said it’s not possible because the mostly poor families she serves can’t pay enough to adequately supplement the meager subsidies she receives from the state.

So she counts on teachers like Lester, who are committed to making it work.

Lester’s day begins when her alarm blares at 6:45 a.m. She wakes in her childhood bedroom because an illness a few years ago forced her and her three children — 17, 13 and 3 — to move in with her mother.

She starts with a mantra that she silently repeats in her head so she does not wake up her 3-year-old son. “Ancestors, I ask you to go before me and open any doors that shall be closed and clear any paths that shall be blocked.”

On a Thursday in May, she drove two of her children to their schools, then landed in her own classroom by 8:15 a.m. Nine children were bouncing around her room like pinballs — more than usual — because parents had dropped them off early.

Lester tied on her chosen uniform, an apron printed with the words “I teach tiny humans,” and got started. 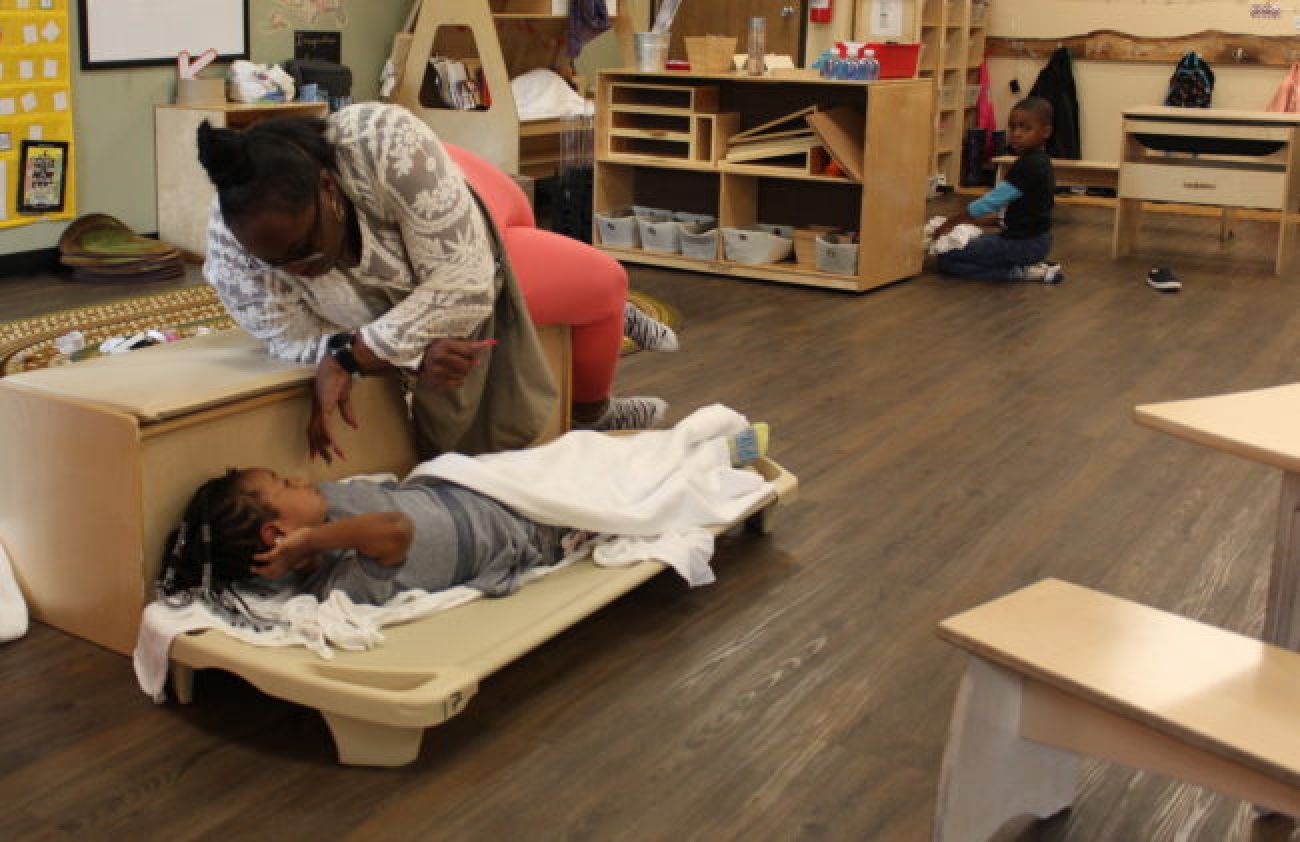 She corraled her students around a low table, where they spent a few minutes tracing letters on sheets of paper. It was the first in a string of activities that would help her students get ready for kindergarten. The letter of the week was “k,” so they drew its shape in the air and brainstormed “k” words: “king,” “koala,” and “kangaroo.”

“What does a kangaroo do?” Lester asked when they had finished. Without saying a word, the students started hopping.

Lester’s students enter kindergarten with basic math and reading skills, setting her program apart from many in the state. Improved school readiness is one reason some economists have estimated that society gains $7 for every $1 of public spending on preschool.

Lester loves everything about her job besides the pay.

“There are days where I get overwhelmed,” she said. “But I love what I do.”

After an episode of postpartum depression, Lester took up meditation and yoga, convinced that her students’ well-being depends in part on her own. She embraced the center’s focus on a child’s emotional and physical needs, attending trainings on weekends to deepen her understanding of the curriculum. She already has a child care credential, and she plans to pursue an associate’s degree in the fall.

Another reason Lester is happy in her job: Her classroom in Detroit’s Brightmoor neighborhood is brand new, an upgrade over the house where Davis used to operate Children of the Rising Sun. Thanks to a grant from IFF, a national nonprofit, and other local foundations, there are books in the book corner, a play kitchen, house plants, and lights that dim down for nap time.

“I really like coming here,” said Priscilla Esquivel, an instructional coach for the Early Childhood Investment Corporation. She was working in Lester’s classroom under a grant from the W.K. Kellogg Foundation (which also funds Chalkbeat). After observing Lester at work, she said she was impressed by a palpable sense of calm in the room.

“They just do everything so well,” she said. “For the quality they’re offering, the teachers should be making a lot more.”

Making ends meet is a constant struggle for Lester. She has racked up debt on four different credit cards, using them to buy food and gas. She figures she owes more than $14,000, a heavy burden on top of her daily worries about rent and putting food on the table.

She’s not alone. A survey of 685 early educators conducted by Michigan’s education department found that 54% worried about having enough money for food. More than half reported using their savings to cover basic expenses, and 42% said they used credit to make ends meet.

“These are the teachers we’re providing for poor kids, and their kids probably qualify for the programs they’re teaching in,” said Steven Barnett, an economist who directs the National Institute for Early Education Research at Rutgers University. “That just seems wrong.”

He puts the responsibility for the problem squarely on state lawmakers, who are stonewalling Whitmer’s attempt to increase the state’s childcare budget. Quality childcare is so expensive — largely because of the cost of paying highly qualified teachers — that few families can afford it. When families pay the free-market cost, tuition for child care can be comparable to tuition at the University of Michigan. As a result, pay for early educators depends almost entirely on state subsidies.

“The state is essentially determining the pay level,” he said. 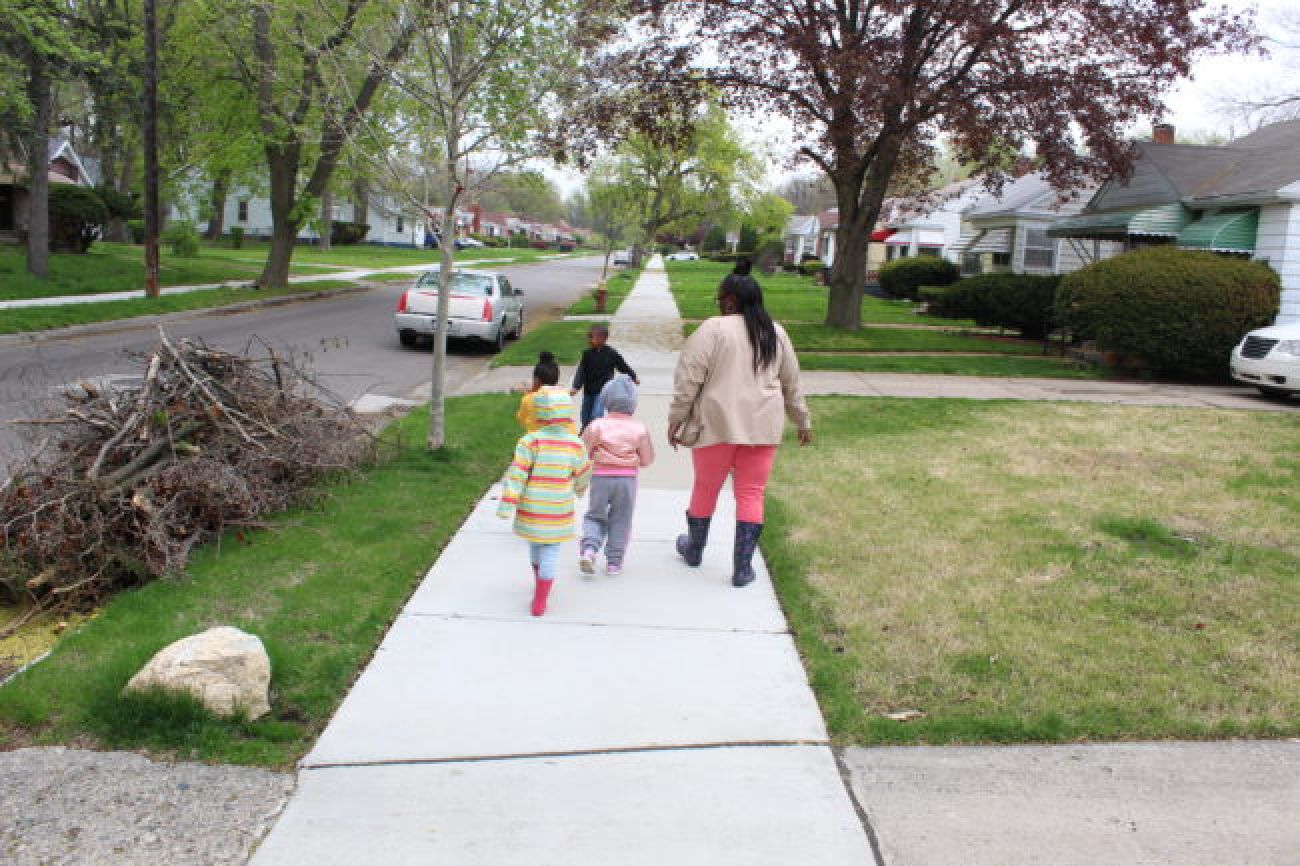 That’s bad news for childcare workers in Michigan, where childcare subsidies are among the lowest in the nation.

As a result, low salaries are the rule at every level of the profession. The highest-paid preschool teachers in the state earn about $42,000 annually to staff Michigan’s free preschool program for 4-year-olds. Kindergarten teachers with similar qualifications make nearly 50% more on average.

Many more, including Lester, work for private childcare centers, where salaries are significantly lower. The pinch is especially severe for private programs that primarily serve poor families, like Children of the Rising Sun.

“Parents can’t afford to pay any more. Providers can’t afford to make any less. We have to figure out a balance,” said Erica Willard, executive director of the Michigan Association for the Education of Young Children.

Lester says she doesn’t pay much attention to political debates surrounding early childhood education. She’d rather focus on her students.

Over a long day, it was impossible to ignore the boy who had flipped his soup bowl onto his head. When the class played music, he seemed to use every muscle in his body to play a toy drum. He focused intently on his Play-Doh, staying behind to add more tiny details long after the other children had tired of their projects. When Lester asked him what he was making, he said, “a jungle.”

The boy had arrived early on the day Chalkbeat visited Lester’s classroom, and she worried that he hadn’t gotten enough sleep. During breakfast, she watched him closely. “Don’t put too much syrup on or you’ll be going 90 miles an hour through the classroom,” she told him. He listened, pouring carefully. Then he finished his waffle, noticed that there was leftover syrup, and drank it straight.

As he sped through the next few hours, Lester said his name more often than any other child’s. She wasn’t angry, just reminding him of the rules. This approach worked well until lunch, when, carried away by a joke, he flipped his empty bowl onto his head.

After they’d talked it out, he fell fast asleep for two hours.

Nap time came nearly six hours after Lester’s morning alarm, at 12:26 p.m. This would be the only break in her long day.

“And now I can take a deep breath,” she said.

She turned on her phone and scanned her Instagram feed. As she decompressed, her mind was still on that boy and his future.

“I don’t want him to be labeled or put to the side in kindergarten, just because he couldn’t focus or pay attention,” she said. “I worry he’s going to get pushed out of the class, or he’s going to get in trouble — and not for doing anything bad, he just couldn’t control himself.”

The boy seemed more relaxed when he woke up, and the rest of the day passed in a blur. There were more crafts, more activities, and a field trip to the gym.

Lester didn’t walk out of the building until 6:15 p.m. The last child had been picked up and her classroom was clean. In one hand she carried a bag of potatoes left behind by a food pantry that set up shop in their building earlier in the day. Part of dinner was covered.

“I’m good,” she said, reflecting on the day. “I can breathe. I’m going home to cook and try it all over again tomorrow.”

Koby Levin is a reporter for Chalkbeat Detroit, a news website that covers education issues. This article was published on June 13 and is reprinted with permission.