KALAMAZOO—Kathy Beebe wrapped up her workday by noon on Tuesday to the sounds of powertools affixing metal panels to the front of her downtown Kalamazoo coffee shop.

She had opened Caffe Casa hours after a crowd carrying baseball bats had stormed the street, breaking windows during a few-minute rampage after midnight on Tuesday morning. It was a different kind of morning at the cafe: Conversations all focused on the damage, and she didn’t get her baking done.

Then, as rumors spread about a destructive crowd returning by 1 p.m., she had two goals.

The first involved securing her store, opened 28 years ago on Burdick Street and one of a handful surviving from that time, she said.

The second reflected an urgency expressed up and down the block to finish the job by 1 p.m., as sheets of plywood overtook storefronts on Burdick and surrounding streets, from banks to restaurants to the small retailers who fill the storefronts.

“I’m closing early. I’m trying to get out of here in a safe, timely manner,” Beebe said. “I’m going to try to protect my store.”

I’m closing early. I’m trying to get out of here in a safe, timely manner. I’m going to try to protect my store.” — Kathy Beebe, coffee shop owner in Kalamazoo

Small businesses in Kalamazoo are not much different from those in other Michigan cities and across the United States, as they grapple with destruction associated with some among the crowds who are breaking windows, setting fires and looting. That activity has often followed largely peaceful demonstrations over the police killing of George Floyd in Minneapolis, which continues to inspire tributes and protests against police brutality. On Monday, President Trump lectured governors to get control of the protests and threatened U.S. military intervention if they did not.

In Michigan, protests in places like Genesee County and Troy saw police participating as allies with demonstrators. Other police forces have been involved in more conflict.

Detroit police made 60 arrests on Friday night as violence flared, with 84 more on Saturday. Downtown Grand Rapids set a curfew after a chaotic Saturday night that saw businesses damaged near Rosa Parks Circle and squad cars set on fire. Prosecutors have announced charges against two people accused of rioting or inciting others to do so.

The commercial damage comes at a trying time for Michigan businesses, which have waited months to reopen during the ongoing COVID-19 pandemic.

“It’s been horrible,” Beebe said. “We’re talking a fraction of regular business. And that’s with the support of my regulars.”

In Kalamazoo, people crowded the pedestrian mall Tuesday morning. The one-way street, filled with independent shops and restaurants, is a civic and commercial center for this city of about 76,000 people that is home to Western Michigan University. As craft brewers set up destination tap houses around downtown, it’s the one-way lanes of the mall where city leaders have worked hard to create a walkable hub for the city.

The mall drew peaceful protesters over the weekend. Then overnight Monday, as a nearby protest turned chaotic, a wave of window breaking overtook the street.

“The most disheartening thing I heard was, ‘Don’t break any pointless windows. Don’t break anything we can’t get anything out of,’” said downtown resident Emily Malone as she picked up coffee from Beebe’s shop.

Malone said she’d heard glass breaking for about 15 minutes, following protests against police violence in nearby Bronson Park. “We saw a lot of people circling all night,” she said. Videos show tear gas used by police.

“You could see the same cars making laps, with no license plates.”

By Tuesday morning, the tone had changed: Professional repair crews were lifting plywood into place, as door after door and window after window were covered, in the event destruction returned.

Amid the workers were volunteers bearing hammers, cold water and offers of support.

Jennifer Moubray sat for a moment outside of Amy Zane, a store that sells the work of local artists. She awakened Tuesday morning to a feeling of helplessness and wanting to help her friend, Zane. 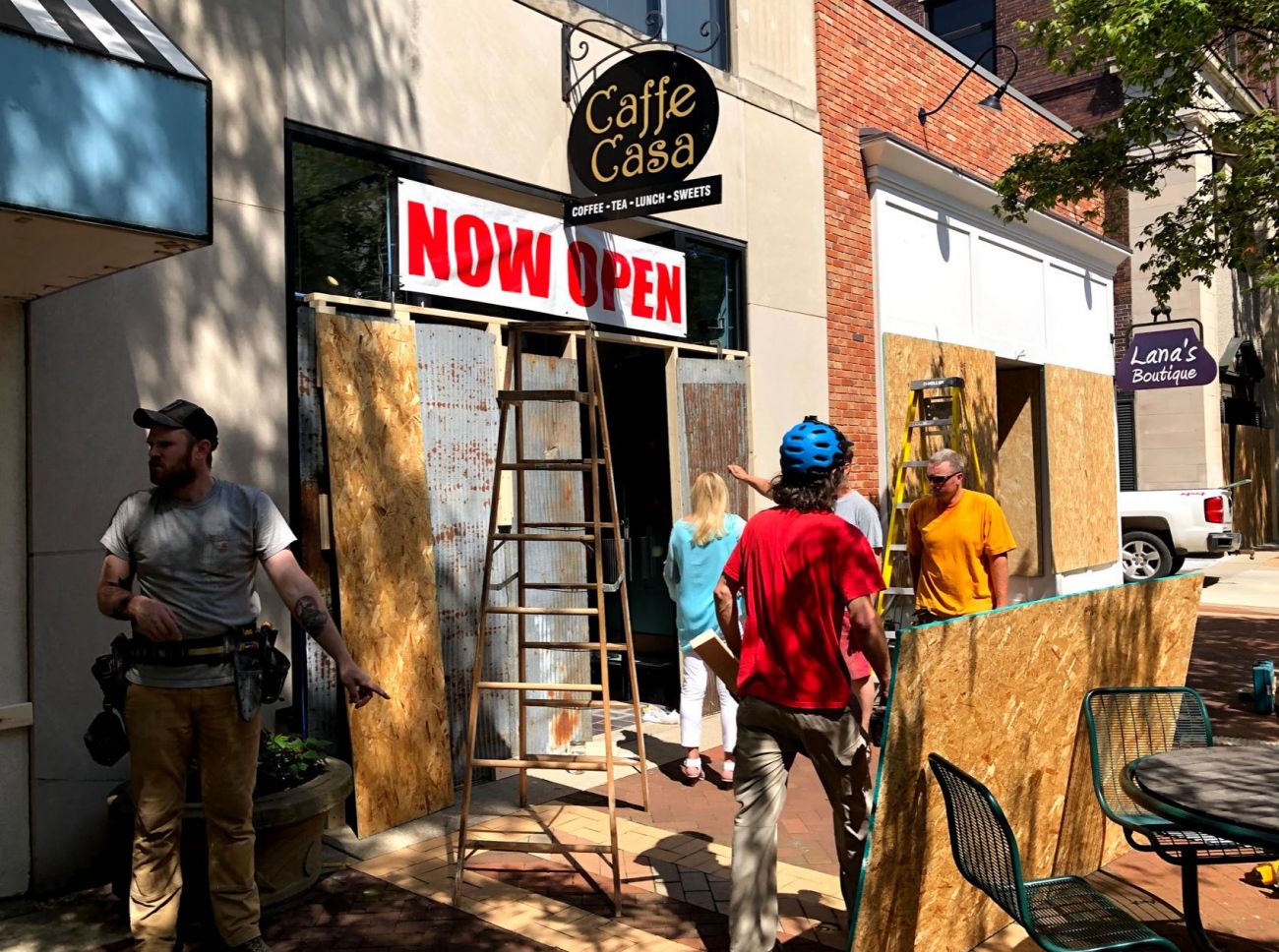 She said she worries for the rest of downtown.

“They targeted these small, downtown family-owned businesses,” Moubray said. These businesses, she said, are “going to have a really hard time.”

Zane stood on the sidewalk amid well-wishers and volunteers putting plywood over the copy-paper signs proclaiming “Black Lives Matter” and “Love is Love” near the door to her store. She walked over to Moubray, and they embraced. “I’m heartbroken,” Zane said.

Other supporters included Costas and Bianca Ciungan. Bianca Ciungan works with the Arts Council of Greater Kalamazoo. She and her husband expressed concern about the many businesses that had been affected.

Costas Cuingan moved to the Kalamazoo area from Metro Detroit, where he knows business owners who’ve struggled due to coronavirus.

“They’re already hurting,” he said of small business owners. “It’s not the peaceful protesters doing this.”

The couple were among several people and business owners who told Bridge Tuesday they believed out-of-towners must be responsible for the destruction. It’s hard to envision, they said, their own community caused the broken glass or the threats of more damage.

“We all have to support each other and keep each other safe, and we can’t have the destruction of our buildings,” Costas Cuingan said.

Zane, a Kalamazoo native who returned from living on both the east and west coasts to open her store, didn’t see what happened to her business. By the time she arrived Tuesday morning, her employees were sweeping glass and cleaning up, as volunteers took care of the exterior plywood. Zane and other business owners interviewed said little if any merchandise appeared to be missing.

This was not the first struggle for her business. Businesses on the mall have had to fight for customers amid construction, street closures and other issues. After coronavirus, her sales are at about 10 percent of normal. She’s waiting to open to the public, counting on online sales until she feels it’s safe to open her doors.

At least 80 people had reached out to Zane by noon Tuesday, she said.

“It’s a real bummer in a time of major bummers, but we can fix stuff,” Zane said. The framing of the destruction, the store owner said, shouldn’t focus on shop damage. “Killing innocent black men has got to stop,” she said.

The business owners say they are struggling to make sense of the window smashing.

Some say they were told rental cars with out-of-state license plates were among the cars arriving late Monday. Others suspect the curfew in Grand Rapids sent trouble-makers south down US-131. One business owner believes George Soros was involved. Another felt certain white supremacists were behind the damage. Most seemed to prefer theories of roving outsiders over the more complicated possibility that local residents were involved.

“These are people here to incite violence and instigate and promote chaos,” Beebe said.  “We all believe that what happened to George Floyd is horrible and needs proper justice. But to just go to every community and try to destroy the foundations of service within these areas, it just doesn’t make any sense.”

Others say they won’t be surprised if people who call Kalamazoo home played a role. Floyd’s killing is prompting powerful reactions, and several business owners said Tuesday that the instigation of violence from the far-right to far-left seemed likely. 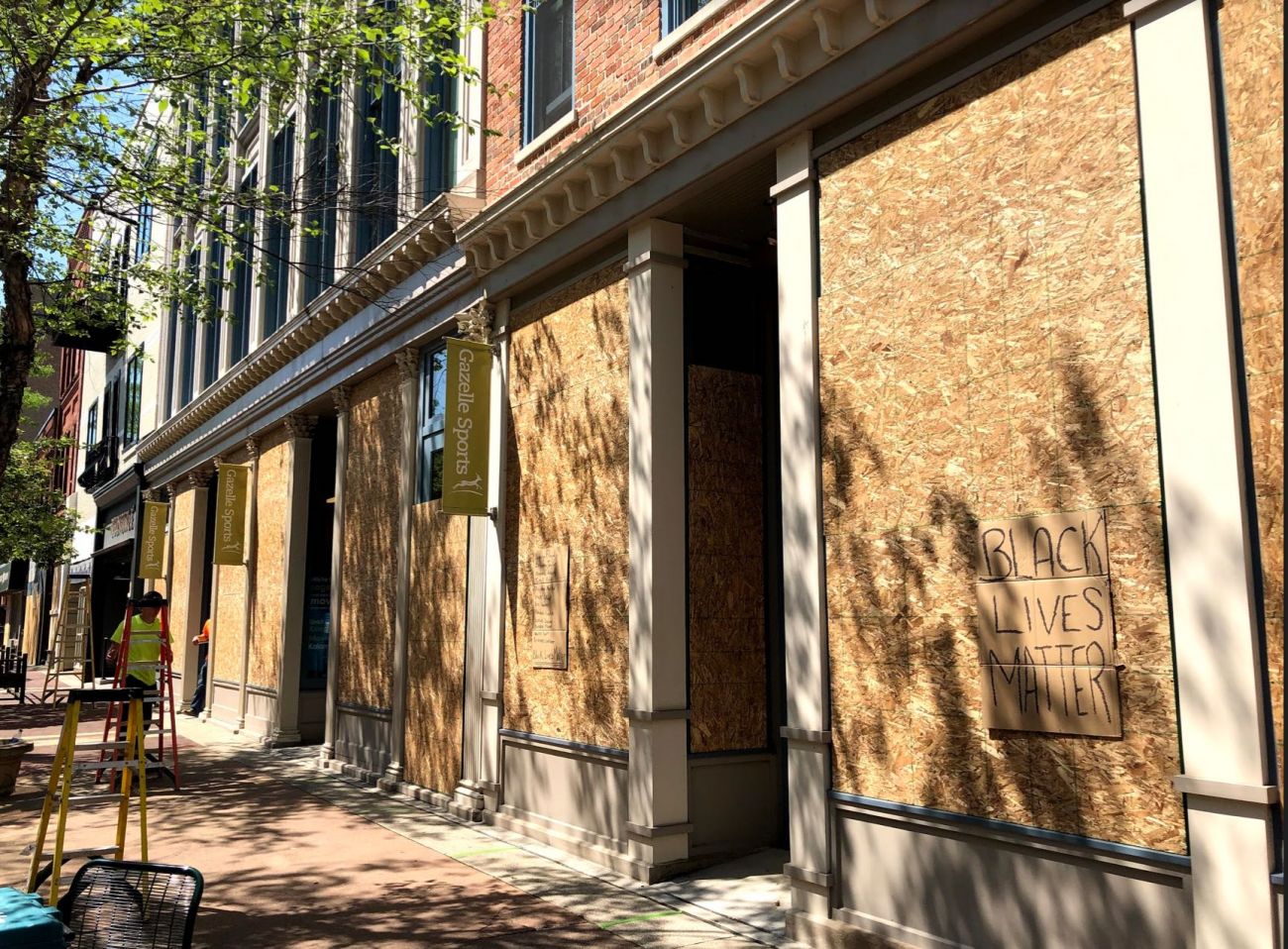 As it turned out, the threat of more protests — peaceful or otherwise — didn’t come to fruition by 1 p.m.

A few young people walked by with signs. Some downtown residents walked dogs. They looked at the plywood, and everyone wore a serious expression. City police, meanwhile, set a curfew for 7 p.m. to 5 a.m., and both police and the National Guard — with tanks — took up positions to block streets west of downtown by 5 p.m., as protesters returned to the city.

Business owners who have wondered for months what the future might hold during a pandemic, now waited with concern about the next day.

“Everyone’s asking me, will you be open tomorrow?” Beebe said. “I don’t know.”

“I have no answers.”