The death of George Floyd, the beating of Sha’Teina Grady El in Washtenaw County, mass incarceration and rampant coronavirus infection in prisons brought thousands to Detroit on Friday evening to underscore the value of black life and protest police brutality.

Throughout the night and early Saturday morning, the heart of Detroit sporadically boiled over with violence.

The peaceful March Against Police Brutality late Friday afternoon was followed by physical attacks between police and protesters on the streets of the Corktown area around 6 p.m. and continued in various pockets of downtown until at least 1:30 a.m. Saturday.

The Metro Detroit Political Action Network was a main organizer of the event in front of the Detroit Police headquarters. Police handed out masks to participants. Like many social media posts, the initial mood was celebratory.

“Look how serious Detroit is about standing up against police brutality. This is amazing folks,” says the unnamed narrator of a Facebook Live post. It showed what appeared to be several thousands gathering in front of police headquarters on the western edge of downtown.

The group called the event a success as it ended the planned portion of the event. “Our demonstration is wrap, and it was an incredible, organic experience. We want to thank all of our amazing speakers, volunteers and everyone who came out to the demonstration,” a Facebook post reads. It warns of potential trouble. “We received word some folks split off from our event and ran into issues with DPD. We aren't sure of the details at this time, as it was not a component of our demonstration, and do not want to misinform.”

Detroiter Lauren Hood was among hundreds there. She said the event was a healthy way to express solidarity and deal with the complex emotions sparked by police shootings. “I wanted to be around people who felt like I felt,” Hood said. “I had a little bit of displaced anger and I didn’t know what to do with it, some frustration, some sadness and I thought I could find some solidarity in folks that were marching. 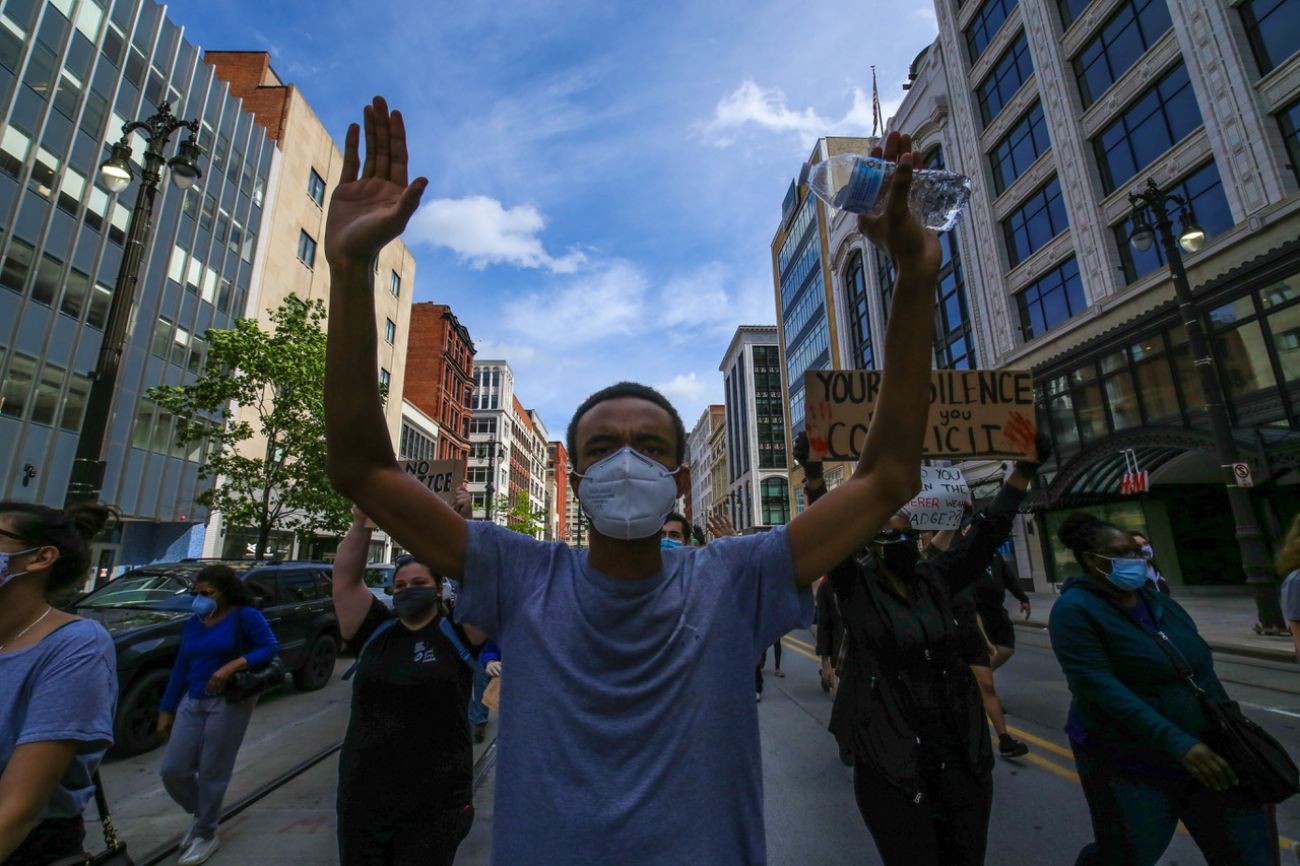 Being a native Detroiter and seeing so many newcomers; like it’s palpable when I’m in places and I don’t feel safe,” Hood said. “But in this crowd, there were Muslim folks, there were LatinX folks, there were white folks and I felt safe because everyone was chanting Black lives matter.”

Hood, who is in her late 40s, said she felt like one of “the oldest people there.”

Detroit hip-hop artist Icewear Vezzo used some of the imagery of the march for a video of his song called “No More Pain,” which he posted during the march.

Detroiter Amaraa Harris, 25, described the gathering as peaceful until the crowd arrived in Corktown. She said she arrived downtown at 4:30 p.m. but left before dark.

“I joined the protest at Lafayette street, people were gathering and chanting — burning sage,” said Harris. “It was a diverse demographic and all about unity.

“There was a nice long line of protesters but when we got to Corktown things slowed down – there was a heavy police presence. That was when the group began to split up and things felt tense. There were more angry white people than there were angry Black people, which I found interesting.”

There was a nice long line of protesters but when we got to Corktown things slowed down — there was a heavy police presence. That was when the group began to split up and things felt tense.” — Amaraa Harris

Some felt the need to confront the police, including a young, black man who had a tense verbal exchange with a black Detroit police captain.

Around 6 p.m, a crowd of at least several hundred people ended up on Michigan Avenue in the Corktown area, where violence erupted. There were also reports of protesters moving southbound without incident.

As day turned to night, various parts of downtown including the Riverwalk, Jefferson Avenue and other parts of the city, there were multiple flashpoints.

Clashes in downtown Detroit are still ongoing at the #JusticeForGeorge protest.

Around 11:30 p.m, as a line of police slowly pushed back protesters down Randolph street, a fatal shooting occurred. Police say the victim was a  21-year-old man from Eastpointe. This video from a local Fox News reporter shows police rushing from the protest to aid the victim on the sidewalk.

More than 60 were arrested, most of them nonresidents of the city, Detroit Police said Saturday.

"We know that the individuals from outside the city of Detroit who converged at the protest location don't represent this city," Detroit Police Chief James Craig said during a Friday night news conference. "I'm just asking for all Detroiters to continue to support us. Let's peacefully protest."

That narrative that non-Detroiters were the main instigators gained traction on social media by Saturday morning. Michigan State Rep. Laurie Pohutsky, D-Livonia, took aim at white protesters who participated in the violence. "To the white people who took part in vandalism in Detroit last night after the peaceful protest was over: YOU are part of the problem,” reads part of her tweet.

To the white people who took part in vandalism in Detroit last night after the peaceful protest was over: YOU are part of the problem. We need to be allies right now, not co-opt demonstrations to exacerbate the issue. The black community faces the consequences, not you. Stop it.

Rodney Watkins, 26, learned of the protest from a former Macomb County high school classmate. Watkins, who is Black, grew up in Detroit and said he believed “the vast majority of protesters were not from Detroit.” Watkins also said the feeling of the protest changed as it got later. 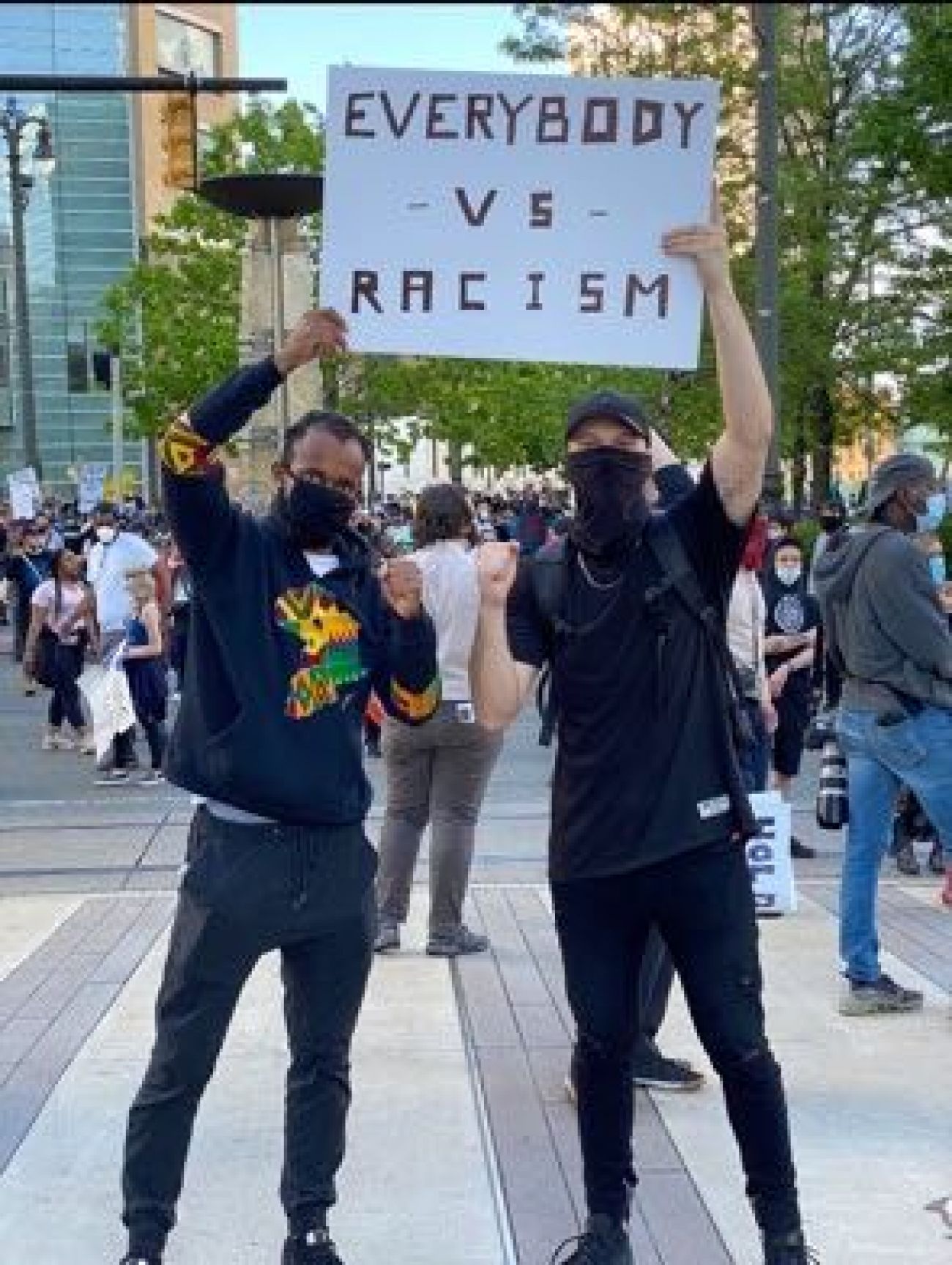 “There were people in the crowd who kept trying to agitate, and others who were like ‘Hey, chill out, we’re not trying to start a riot right now’,” said Watkins.

“This protest was needed to show our disdain and disgust that the system allows the killing of black and brown bodies without there being any accountability. I love that everyone was standing with us.”

Detroit resident Stephen McGee, a professional filmmaker and photographer, documented the events from the start of the march and part of the Corktown scene. One of his Instagram posts shows empathy for both protesters and police.

”People have to get their anger out. Cops did great. The message needs to be heard,” McGee wrote. “I wish I would’ve got a photograph of what I feel could be translated to frustration when a police officer jumped out of a car and yelled something like ‘We are on the same team.” That was after his car was struck multiple times and many windows broken. The officer was black. Shortly after that I saw two officers walking in the crowd and there were discussions whether to hit them, and, then defenses of saying they were on ‘our side.”

The two officers were not attacked.

Kobe Mongo, 20, was near Cadillac Square in Detroit at 11 p.m. when the protests turned violent. He described the situation as “tense” and said many of the people who were downtown at that time “weren’t there to protest.”

“It was a lot of white kids from Birmingham, I heard even people from Ohio were out there and they were riding on scooters,” said Mongo. “Everybody that was around me was drinking. Some people thought it was a party or something like that.”

Olivia Lewis contributed to this report. 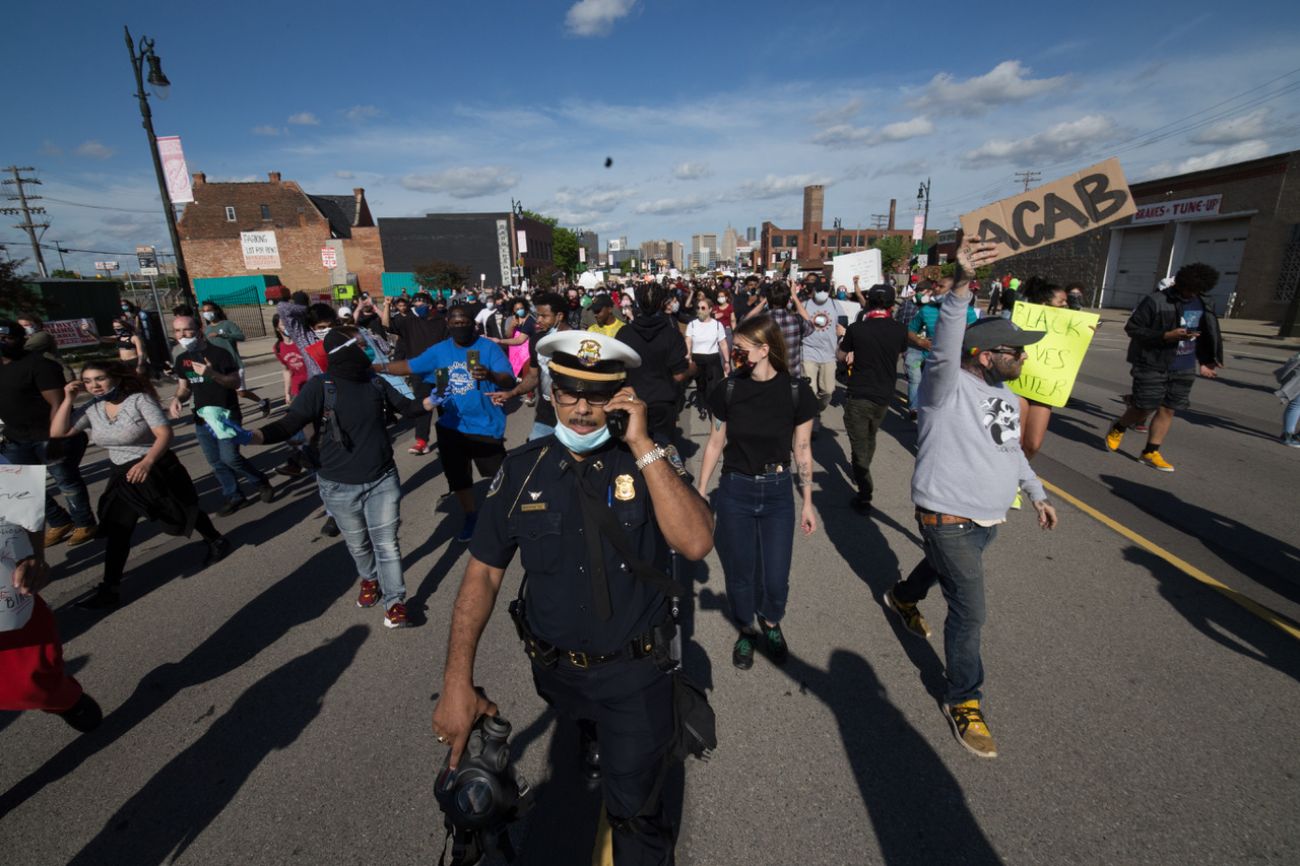