Grand Rapids, this is us: A dispatch from unrest in a segregated city

Urban Affairs
Grand Rapids, this is us: A dispatch from unrest in a segregated city

Editor’s note: The following is a first-person account of protests and property damage in Grand Rapids over the weekend by Michigan Radio Reporter Dustin Dwyer, who lives in the city. Bridge is reprinting it with permission of Michigan Radio, which published it here.

I walked the streets of my city on the night of mayhem Saturday, and witnessed the destruction. I saw the fires burning in the street. I heard the sound of glass shattering, of people cheering. I felt the warmth from a fire as it swallowed a police vehicle on a quiet intersection.

And I’ve listened in the days since, as the people of my city have tried to rationalize away what happened that night, as if it wasn’t us who did it. It was outsiders, we tell ourselves. Look at the person in this photo smashing a window. They’re not from here. They started it all. They did this. It wasn’t us.

“This does not represent who we are,” Mayor Rosalynn Bliss said during a daylight press conference following the night of mayhem in Grand Rapids. “Who we are is what we all experienced this morning as hundreds and hundreds of people came out to restore our city.”

As if each of those groups don’t exist in our community. As if any one of them can be held fully responsible for what happened. It had to be them. It couldn’t be us.

But I was there. I know what I saw, and heard, and felt.

This was past midnight, when fires were already burning, windows had already been smashed. 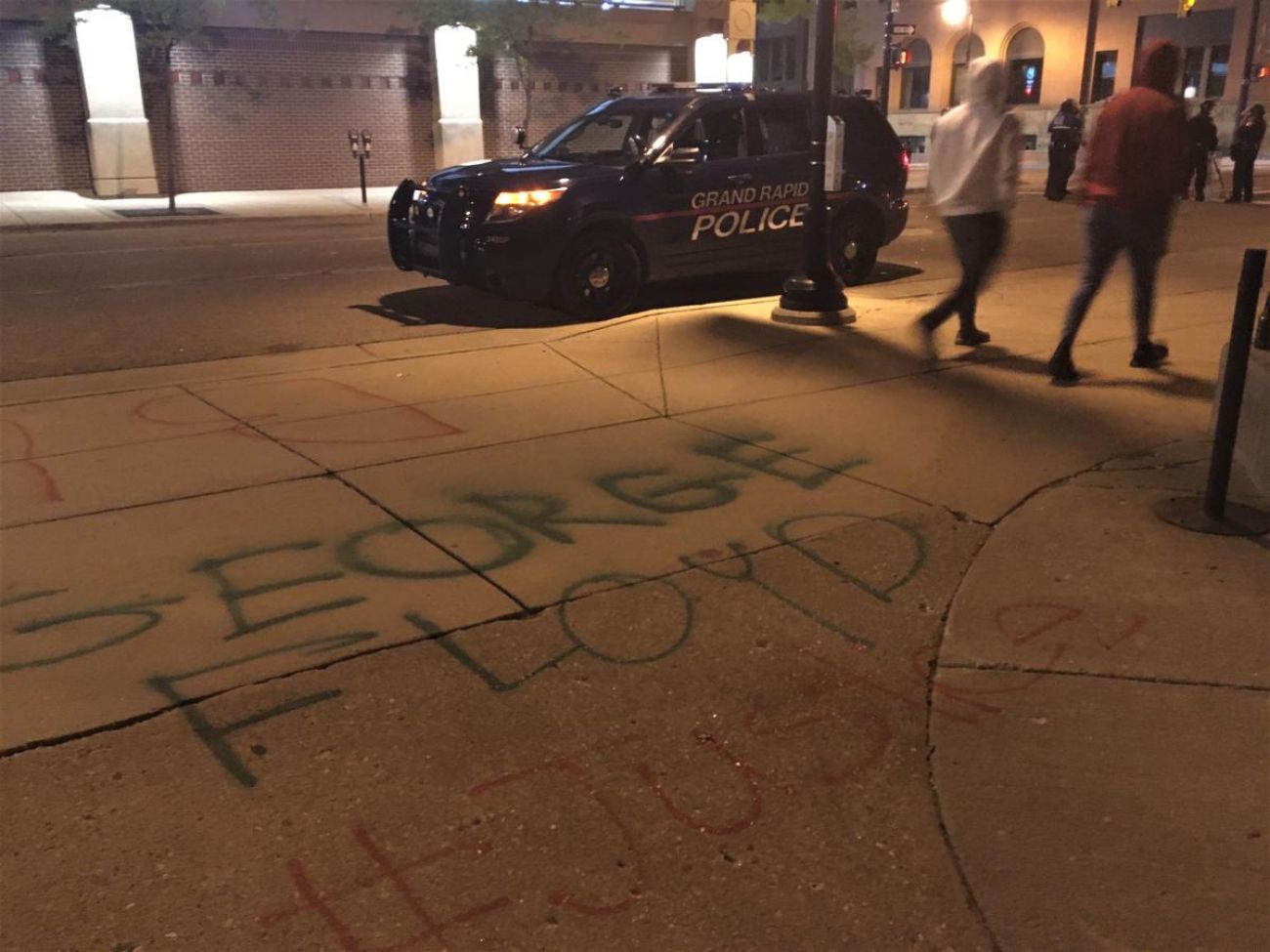 The young man and his friend both told me they were from Grand Rapids, born and raised. As far as I could tell, they were among the majority who didn’t do any damage. But like me, they witnessed what was happening. And they made a distinction that’s been ignored in the days since.

I spent four hours walking throughout downtown Saturday night, and I never personally felt threatened or unsafe. I did see people screaming in the face of police, taunting them repeatedly and viciously. I watched the police remain calm in the face of all of it. There are some videos and stories that have been shared that show more aggression. There was tear gas, and shoving.

But despite the widespread and chaotic destruction of property that night, there were no major injuries.

The narrative that has begun to take hold about the events in Grand Rapids and in other cities is that there are two groups of demonstrators. There are the massive groups of people who’ve been gathering during the day, who are peacefully protesting police violence, and there are the bad people who come out at night with no agenda other than to create havoc.

What I saw in Grand Rapids wasn’t that simple.

No one group of people seemed to stir things up more than any other. The people I saw were diverse – men, women, white, black, Hispanic, Asian. I saw a man in a wheelchair. Most, but not all, were young. Truthfully, it was one of the most diverse gatherings of young people I’ve ever seen in this segregated city.

I watched white people and black people, side by side, smashing windows together.

Telling ourselves that these people, whatever their race, are outsiders who don’t represent the community allows our city leaders to dodge uncomfortable questions about what led to the mayhem, and how they responded.

It allows the city to call in the National Guard, impose a curfew and crack down, all while telling us it’s for our community’s safety. Our community will defend itself against them.

It allows us to ignore that, in the midst of chaos, our city leaders have made conscious choices about who, and what, to protect. They may be the right choices, the safe choices, but they are choices.

After darkness fell and the tear gas canisters cascaded in the street Saturday night, police formed a barrier outside their own headquarters. They stood in lines in riot gear and protected their block, their one block, while chaos and looting sprang up just two blocks away. Smaller teams moved only when there were fires to put out. When the fire department left the area, so did the police.

In the areas that saw the worst looting, there was no police presence at all for much of the night.

“There were questions about why we didn’t have officers more aggressively respond to some of the violators,” said city manager Mark Washington in the press conference the day after the mayhem.

“The police department headquarters was under attack,” he said. “People were trying to compromise the department and replicate what was being done in other cities, and we would not allow that to happen. That took a tremendous amount of resources, but we still had other officers deployed throughout the downtown area. Once we were able to secure the department headquarters, you saw then increased deployment, and other officers throughout the downtown area.”

This is true, and I saw it unfold over the course of the night. It is also true that whenever police did enter an area, they faced taunts and instigation.

I was on a nearly empty Fountain Street near 1:30 a.m. as a police vehicle burned uncontrollably. Another police vehicle was parked just in front of it, and in danger of catching fire as well. Three police officers ran to the scene and quickly told the few people there to step back. The people didn’t step back. Instead they yelled at the officers.

Everywhere there were police, there were people screaming at them, saying horrible things to their faces. The officers I saw were remarkably calm. Other than the tear gas canisters lobbed into the street, I didn’t see officers escalate the tensions.

But the department chose which parts of downtown it would risk protecting, and which it wouldn’t. While hundreds of officers stood to protect the department headquarters, looters emptied stores, unbothered, just down the block.

The looters I saw were not hardened criminals sent into town with an agenda. Most were young, opportunistic. Many seemed to be looting mostly for the fun of it. After the windows were smashed at F. David Barney, an upscale men’s clothing store on Ottawa, I watched one young man (he appeared to be white) walking along the sidewalk holding a rack full of belts high in the air.

“Want a belt?” he asked, to random young people on the street.

Minutes later, a man (he appeared to be black) who was a little older, walked up, stood in front of the window, and told the looters to get out. He wasn’t armed. He just stood there and told the young people not to loot. So they stopped, for a little while at least.

There were others there that night who also tried to stop what was happening. Many of the young people came downtown with a group of friends. Sometimes a few members of the group went through the windows into a store, while their friends tried to stop them.

And while the mayor praised the people who came “at the first sign of light” to clean up downtown, the truth is, there were nighttime cleaners too. I saw one man shoveling glass and putting it in a dumpster even as glass continued to be shattered around him, and the dumpster itself was on fire. Another man walked up Monroe Center with a garbage bag in hand, picking up litter.

These things happened at night. These people were our community too.

But nighttime is now banned in the city. No one is allowed out past 7 p.m. Military vehicles are parked downtown, protecting what our city has chosen to protect.

Now there is talk of being more aggressive, using more force against those who destroy property under the cover of night. We must stop them, whoever they are.

Now I fear the property violence could be answered with human violence.

We ignore the video from 2015 showing Grand Rapids police pulling a taser on young men, forcing them to the ground, because the young men had been horsing around in a park. We ignore the incident in 2017 in which GRPD cuffed a crying 11-year old black girl, because the girl’s aunt was suspected in a stabbing. We ignore the five black boys who later that same year cried out “What did we do?” and “I don’t want to die,” as they laid face down on the pavement with GRPD officers pointing guns at them. We ignore that these incidents continued to happen in 2018, even after angry citizens demanded changes from the department. We ignore that in 2019, a  Marine war veteran with PTSD faced a possible deportation when a senior GRPD commander sent a tip to a federal immigration officer. We ignore the 23 separate alleged incidents of discrimination by GRPD that the Michigan Department of Civil rights said it would investigate that year.  We ignore that just days before the mayhem in Grand Rapids, a mugshot circulated on social media of a man whose face was torn up, beaten by GRPD officers. We ignore that just hours before the peaceful protest on Saturday, the department issued a statement saying officers had not used excessive force on the man.

And we ignore that we were warned about how it might turn out.

In 2017, Bomesha Sims spoke at a city commission meeting. His son was one of the boys held at gunpoint by GRPD officers that year. The meeting was packed with angry people. There have been many meetings like it, in city hall and elsewhere these past several years.

“I just want to tell police and commissioners that something needs to be done,” Sims said. “Because y’all aren’t going to be able to control what happens next.”

That was three years ago.

What happened in downtown Grand Rapids on the night of May 30, 2020 was an uncontrollable event. Sparked by the death of George Floyd in Minneapolis, inspired by the protests there, people rose up in cities across the country. Our city is just one of them. But that doesn’t mean the events had nothing to do with us. It doesn’t mean that people outside our community are the ones responsible for the mayhem.

It was us. Not just in the light of day, but in the darkness too.

This is our community.