LANSING — Sixteen-year-old Garlin Gilchrist was two blocks away from Farmington High School when a police officer pulled him over “for going 24 in a 25” mile per hour zone and interrogated him about who he was, what he was doing and where he was going.

Nevermind the backpack on his passenger seat, which told the clear story of a junior on his way to class.

More than two decades later, Michigan’s first African-American lieutenant governor remembers the traffic stop well — and viscerally recalls the sinking feeling of being singled out by law enforcement in the suburb where he lived, which was overwhelmingly white.

“I really felt dehumanized by that experience, because I didn’t think I deserved to be questioned like that,” said Gilchrist, now 37, whose parents moved from Detroit to Farmington in 1989 to give him access to better schools. “I wasn’t breaking any laws.”

The encounter and others like it explain some of the anxiety that many people of color carry from a lifetime of interactions with police, Gilchrist told Bridge Magazine in an interview on Monday as nationwide protests over police brutality continued following the deaths of George Floyd in Minnesota, Breonna Taylor in Kentucky and others before them.

Amid a nationwide reckoning over institutional racism and a global pandemic that has exposed systemic inequities leading African Americans to die at greater rates, Gilchrist has stepped into the spotlight as a prominent voice for criminal justice reform and racial equity, issues he discussed Sunday night in a nationally televised appearance on MSNBC.

Gilchrist had never held elected office when now-Gov. Gretchen Whitmer tapped him as her running mate in 2018. An unknown across most of Michigan whose selection surprised even some Democrats, he was promoted by party leaders as a rising star after giving up a software engineering career for political activism.

Now, with Whitmer still getting mentioned as a possible Democratic vice presidential nominee, Gilchrist could be in line to be Michigan’s next governor should Joe Biden pick her and defeat Republican President Donald Trump in November.

“It’s true,” Gilchrist said, laughing briefly as he acknowledged the scenario before praising Whitmer for remaining “responsive to the people of Michigan” despite the national attention, speculation and Twitter attacks from Trump and his allies.

“If I’ve learned anything in the last three years of my personal and public life it’s that anything can happen, but what you can control is how you spend your time and energy, and what outcomes you choose to focus on,” Gilchrist said. “... If something happens in that regard for Gretchen Whitmer, I’m certainly humbly ready to serve the people of Michigan.”

Gilchrist, who marched with Whitmer at a recent protest through Highland Park and Detroit, is playing a prominent role in the administration's response to the national push for police reforms.

He joined Whitmer in announcing an initial round of policy proposals and on Wednesday will stand — socially distanced — beside state lawmakers, police and sheriffs to announce a new “transparency collaborative” designed to increase public accessibility to police “use of force” data.

Experts say it’s a public role he is uniquely qualified for as the first African American elected to Michigan’s executive office. By voting for him in 2018, Michiganders showed they were ready for “representative leadership,” Gilchrist said.

“I think it matters that the public servants who are looking to make choices now, that they’ve had these life experiences,” he said. “We get disconnected policy when you get people who are governing over experiences they’ve never had. And unfortunately I, as both a black teenager [and now] a black man, have had these kinds of interactions with law enforcement.”

Whitmer and Gilchrist have publicly backed legislation that would require new police officers to undergo implicit bias and de-escalation training, while encouraging law enforcement agencies to adopt “duty to intervene” policies that would require officers to stop a colleague they see doing something inappropriate or illegal. The governor last week also added civil rights voices to the Michigan Commission on Law Enforcement Standards.

Because of Whitmer’s emergency powers during the pandemic, Gilchrist’s coronavirus task force has been able to produce immediate results by crafting recommendations that helped shape the governor’s executive orders, he told Bridge.

Its members have, for instance, pushed to expand testing criteria and boost access for low-income residents, including deployment of mobile units that can “get testing to where people are” and connecting them with a healthcare “navigator” for future care, Gilchrist said.

The task force has also warned medical providers against “implicit bias” in testing and treatment decisions. Dr. Joneigh Khaldun, the state’s chief medical officer, in April sent doctors a letter asking them to be aware of how their own "subconscious biases may impact their practice.”

That was an important step, Gilchrist said, because “one of the first ways you deal with that kind of medical bias is to name it, and have people be mindful of it.”

The bipartisan task force on jail and pretrial Incarceration in January released 18 policy proposals to shrink the state’s county jail population, recommending the state reduce driver’s license suspensions, shorten probation terms, cut fines for civil infractions and stop requiring inmates to pay for their own incarceration, among other things, to reduce poor people being jailed for, essentially, being poor.

That seems like “eons ago,” but the recommendations also ended up informing Whitmer’s pandemic-related executive orders recommending early release for pretrial inmates jailed for traffic violations, license suspensions and nonviolent offenses, Gilchrist said, noting longer-term legislation has been introduced to codify some of the task force proposals.

“As we think about why people are demonstrating in streets across the state and across the country, they're demonstrating because the communities, the black community in particular, has not felt an experience of public safety,” Gilchrist said. “They have not necessarily felt like law enforcement was always on their side.”

Gilchrist had two passions as a child: basketball and computers. The former took him to courts across Detroit, where his parents insisted he continued to spend time to maintain a close connection to the city even after they moved to Farmington. The latter took him to the University of Michigan, where he double-majored in computer engineering and computer science.

After college, Gilchrist passed up an opportunity to stay in Michigan and work for General Motors and moved to Seattle to work for Microsoft, which he has described as a better fit professionally. He missed home, however, and from Seattle launched an effort called “Detroit Intern” to encourage talented young Detroiters to stay in the city rather than leave like he did after college.

He also grew more political in Seattle, where he helped start a blog called The Super Spade that focused on “black thought at the highest level” and worked as a Washington state social media manager for President Barack Obama’s 2008 campaign.

In 2009, a week before Gilchrist married his wife, Ellen, they moved to Washington, D.C., where he began work as a community organizer for the Center for Community Change. Two years later, he went to work for MoveOn.org, one of the country’s largest liberal advocacy groups. 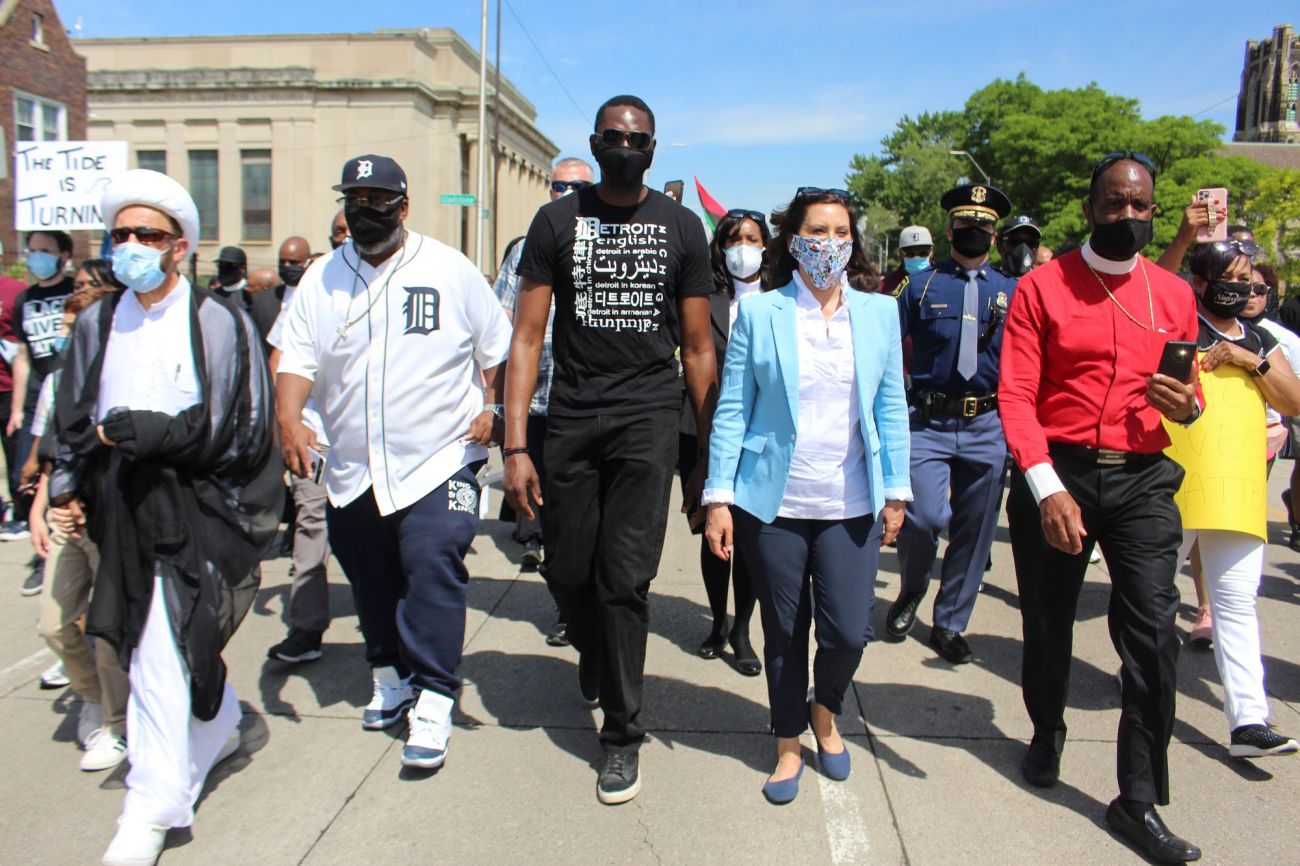 His ties to MoveOn made him a target for Republicans in the 2018 election. When Whitmer announced him as her running mate, a super political action committee backing Republican nominee Bill Schuette immediately blasted the pairing as the "most liberal ticket ever."

And when Gilchrist was cited for a blight violation for "excessive weeds or plant growth" outside a vacant Detroit building he said he had intended to renovate, Schuette called on him to withdraw from the race, saying his "extreme views and incompetence make him unqualified to be lieutenant governor."

But Gilchrist defends his work at MoveOn, where he helped organize gun reform campaigns in the wake of Florida teen Trayvon Martin’s death and a mass shooting at Sandy Hook Elementary School in Connecticut, both in 2012. One of his biggest projects for the advocacy group involved urging states to support legislation that would prohibit employers from firing workers because of their sexual orientation or gender identity.

Gilchrist recalled that project Monday as he celebrated a U.S. Supreme Court decision guaranteeing workplace protections for gay and transgender Americans. He told Bridge he had spent his morning texting leaders he had worked with years earlier.

“It's extraordinary,” Gilchrist said. “This is like the biggest civil rights ruling for LGBT people since marriage.”

Gilchrist was relatively quiet his first year in office and conducted few media interviews. But he turned heads — and garnered national attention — last summer with an impassioned speech minutes before a Democratic presidential primary debate in Detroit.

Gilchrist was a "political neophyte" when he took office but has impressed, said Adrian Hemond, a Democratic political consultant with the Lansing-based Grassroots Midwest firm.

The lieutenant governor's role is essentially "whatever the governor says," and Whitmer has given Gilchrist room to lead, he said.

“Garlin Gilchrist appears to be a little bit more in the mold of a Lieutenant Governor Brian Calley,” Hemond added, referencing Gilchrist’s immediate Republican predecessor. “He's been a little more active" than some lieutenant governors and has been "given a couple of specific writs by the governor to really make a deep dive into."

Whitmer faced significant pressure to pick an African-American running mate in 2018 to help the Michigan Democratic Party avoid an all-white slate at the top of the statewide ticket, which featured herself, Secretary of State Jocelyn Benson and Attorney General Dana Nessel.

"At the time he was selected, no one could have ever imagined where we would be today," he said.

"What greater voice could we ask for, other than the governor herself, than to have the lieutenant governor actually be a black man. He's sitting at the table at this moment, and that is absolutely a wonderful thing to have."

Gilchrist and his family moved back to Detroit in 2014, when he went to work for Detroit Mayor Mike Duggan as the city’s first director of innovation and emerging technology.While Gilchrist spent part of his childhood in the suburbs and left the state as a young professional, Kinloch challenged those who would argue he is not an authentic representative for Detroit and its people.

He lost his first political campaign in 2017, falling to longtime Detroit City Clerk Janice Winfrey by about 1,400 votes. He briefly worked as executive director for U-M’s Center for Social Media Responsibility before Whitmer tapped him as her running mate in 2018.

Gilchrist now lives with his wife and their three young children in Detroit’s Corktown neighborhood, where they’ve had a direct view of protesters marching along Michigan Avenue into the city’s downtown business district.

While his twins are only 6 years old, he’s explained to them that demonstrators “want to have good relationships with the police and they want the police to help them and not be afraid of them,” Gilchrist said.

“That’s been a really important conversation, and I think a lot of parents are having these conversations.”