The statement references Schuette’s involvement in a pair of lawsuits against U.S. Environmental Protection Agency regulations largely affecting coal-fired power plants. One lawsuit challenged the agency’s authority to curb emissions of mercury and other air toxics. The other concerned EPA’s authority to slash greenhouse gas emissions.

Now, those same lawsuits are under scrutiny from a liberal advocacy group, Progress Michigan, which claims the suits show Schuette protects polluters.

Like much of politics, the claim focuses on one aspect of an issue (pollution)  rather than another (protecting jobs). Nonetheless, the assertion is accurate, and Schuette’s campaign didn’t directly rebut Progress Michigan’s assertions to Truth Squad.

In a Facebook ad, Progress Michigan says: “Asthma is triggered by coal plant smoke. Why did Bill Schuette try to protect polluters?” 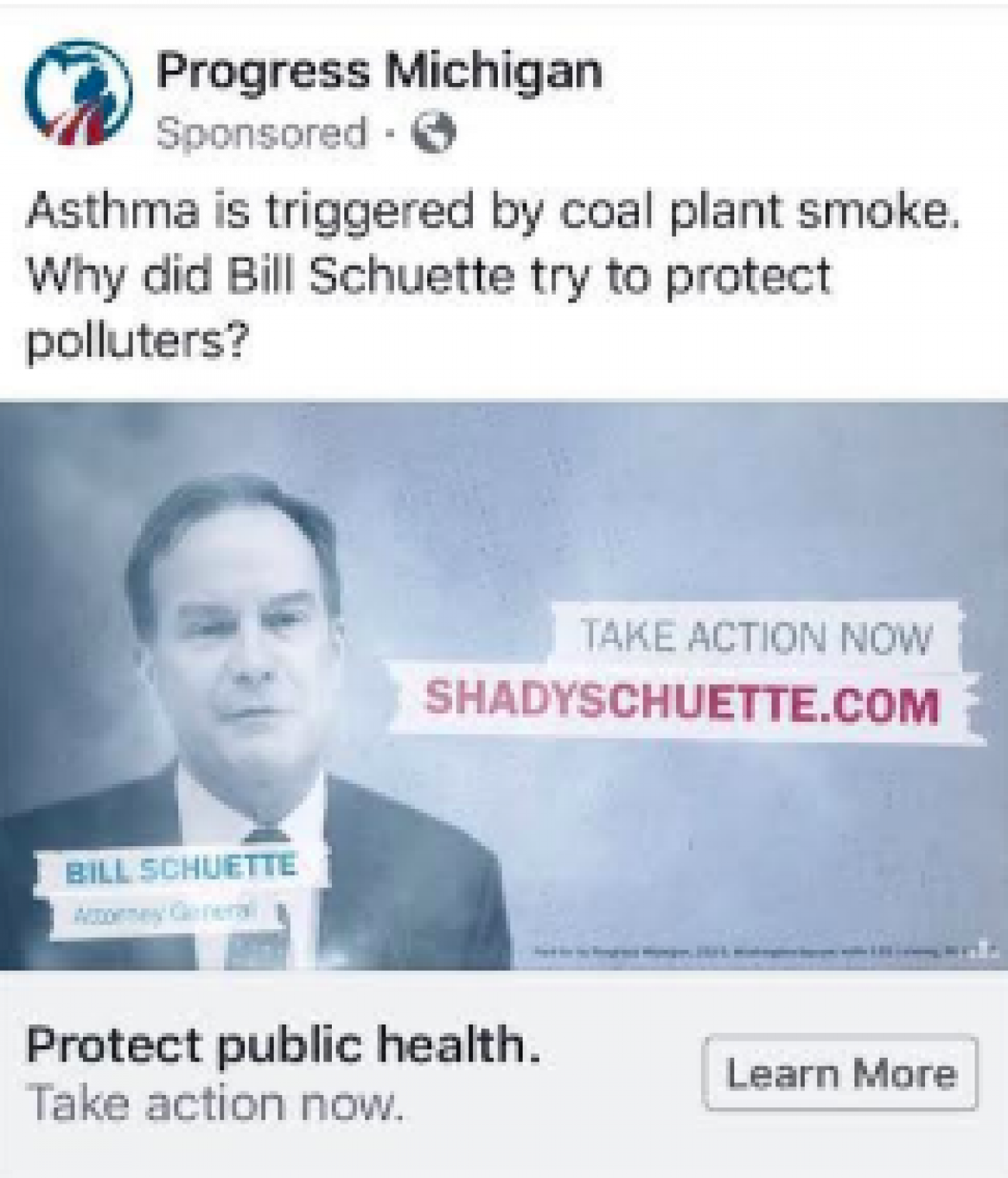 Progress Michigan backs up its assertion by pointing to a 2011 report from the American Lung Association. That’s a Washington, D.C.-based research and advocacy group that seeks to prevent lung disease and relies on dozens of health and medical advisers.

The 2011 report details a litany of hazardous pollutants from coal-fired power plants. Those include acid gases, benzene, dioxins, formaldehyde, lead, arsenic and mercury.

“Researchers have found these toxic emissions cause a dangerous array of harm to human health,” the report states. “These emissions can make breathing difficult and can worsen asthma, chronic obstructive pulmonary disease, bronchitis and other lung diseases. These pollutants can cause heart attacks and strokes, lung cancer and other cancers, birth defects and premature death.”

Peer-reviewed studies have suggested that living near coal plants increases the risk of hospitalization for asthma or other lung diseases. That includes a 2012 study in the journal Environmental Health Perspectives.

In 2011, the EPA issued new limits on coal plant pollutants, including mercury, arsenic and other toxins, saying the effort would limit such health effects.

In 2014, after a federal court upheld the standards, Schuette petitioned the U.S. Supreme Court on behalf of Michigan and 20 other states, seeking to block the rule nationwide.

Schuette claimed the costs for implementing the rule “would be borne by consumers of electricity” and would outweigh the health benefits.

A year later, the U.S. Supreme Court issued a 5-4 ruling on Schuette’s suit that ordered EPA to reconsider the rule because it had failed properly to weigh the costs of the measure versus its benefits.

That’s the decision Schuette touts in his appeals to Republican voters.

But in 2016, the high court again weighed in, declining to intervene in a lower court ruling in the case that upheld EPA standards.That was seen as a loss for Schuette. By that time, Michigan’s utilities were already shutting down coal plants and turning to cleaner sources of energy.

The U.S. Supreme Court stayed those rules in 2016, and President Donald Trump’s administration has since moved to replace them.

(But again, coal plants in Michigan and elsewhere are shuttering anyway.)

Schuette was involved in two lawsuits — one of which he spearheaded — in which he supported the position of coal-fired power plants, whose emissions, studies say, can cause asthma and other health effects.

Schuette frequently highlights the suits, saying they saved jobs and pushed back against overzealous regulation. He, of course, doesn’t mention pollution.

“Attorney General Schuette is a strong advocate for not only protecting our Constitution and laws but also to protect Michigan families, including his work to protect the Great Lakes from invasive species, protecting children by enforcing child support collection, support the victims of human trafficking, his insistence that the survivors in the Nassar case to each be allowed to speak at trial and have their voices heard around the world, and his fight for justice for the victims of the Flint Water Crisis. Bill believes that in the 21st century we certainly should be sophisticated enough to follow the law and find solutions to issues that satisfy several goals, Schuette is an advocate for the people, their jobs, their safety and their environment.”