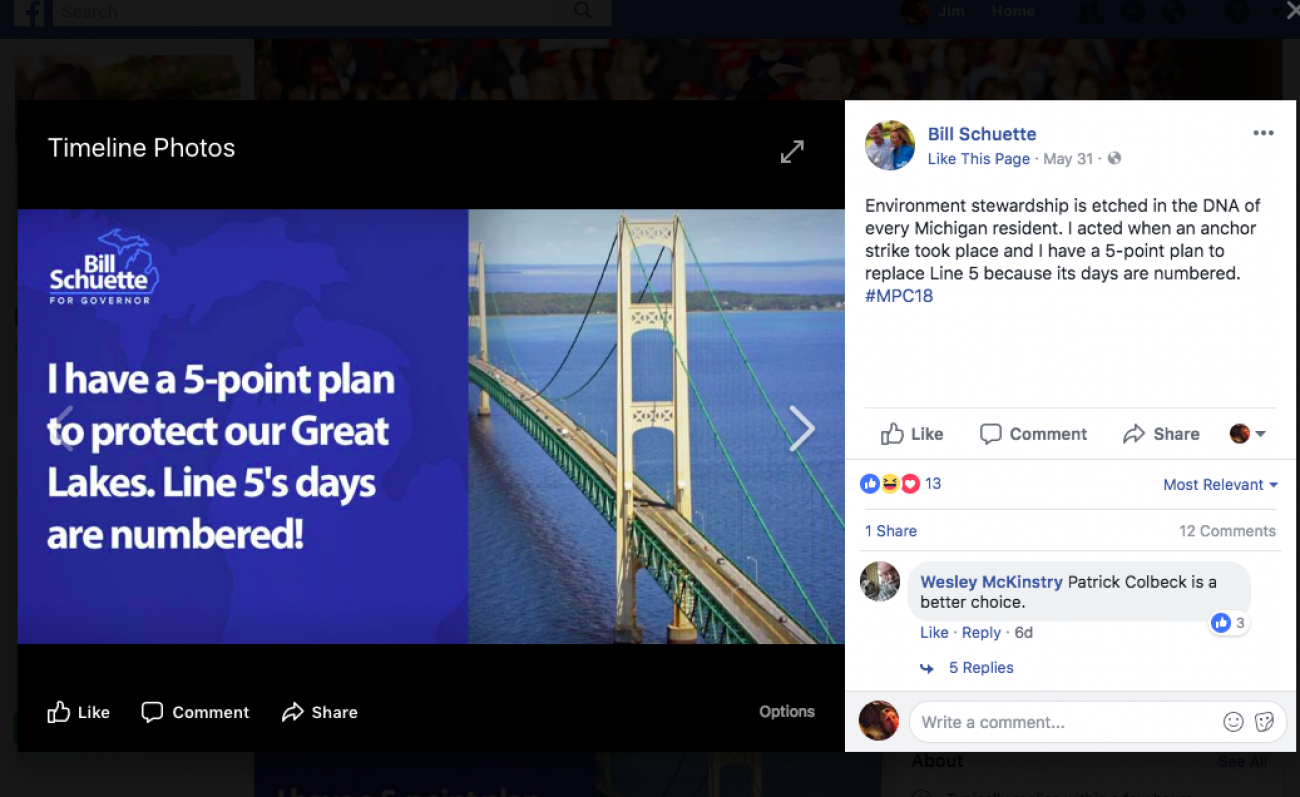 In Michigan politics these days, one environmental issue seems to trump all others: Line 5.

The 645-mile oil pipeline has become a magnet for environmental concerns. That’s largely due to its age (65-years old); the checkered transparency record of its Canadian owner, Enbridge Energy; and because its section of twin pipelines stretches beneath Straits of Mackinac, the gateway between Lake Michigan and Lake Huron.

No party has a monopoly on concerns about Line 5. Top Republicans and Democrats have called for greater protections in the Straits.

But how best should Michigan protect its waters from the risk of a potential Line 5 leak? That’s where political opinion tends to diverge.

Environmentalists and many Democrats have called for a shutdown, while top Republicans such as Gov. Rick Snyder and Attorney General Bill Schuette have endorsed the idea of instead building a concrete tunnel around the line to protect it from a leak.

Now, an environmental advocacy group is claiming Schuette’s tough talk about the line doesn’t match his actions. In an online campaign, the Michigan League of Conservation Voters says Schuette, a Republican campaigning for governor, has the power the shut it down and hasn’t done so.

The claim is mostly accurate. While it’s true that Schuette hasn’t sued to stop the pipeline, the assertion omits information about how the attorney general has sought to mitigate the risks of the line –  and in doing so may mislead voters into believing he’s done nothing.

On a webpage aimed at Schuette, the environmental group quotes Schuette as saying Line 5’s “days are numbered,” and says he hasn’t capitalized on his authority as Michigan’s top lawyer.

“Despite all of his stated concern about the pipeline, to date, Schuette has taken no concrete action to shut it down,” the website says. “As Michigan’s Chief Legal Officer, Schuette has full and independent authority to revoke the easement giving Enbridge permission to have the twin pipelines lay on publicly-owned lake bottomlands.” 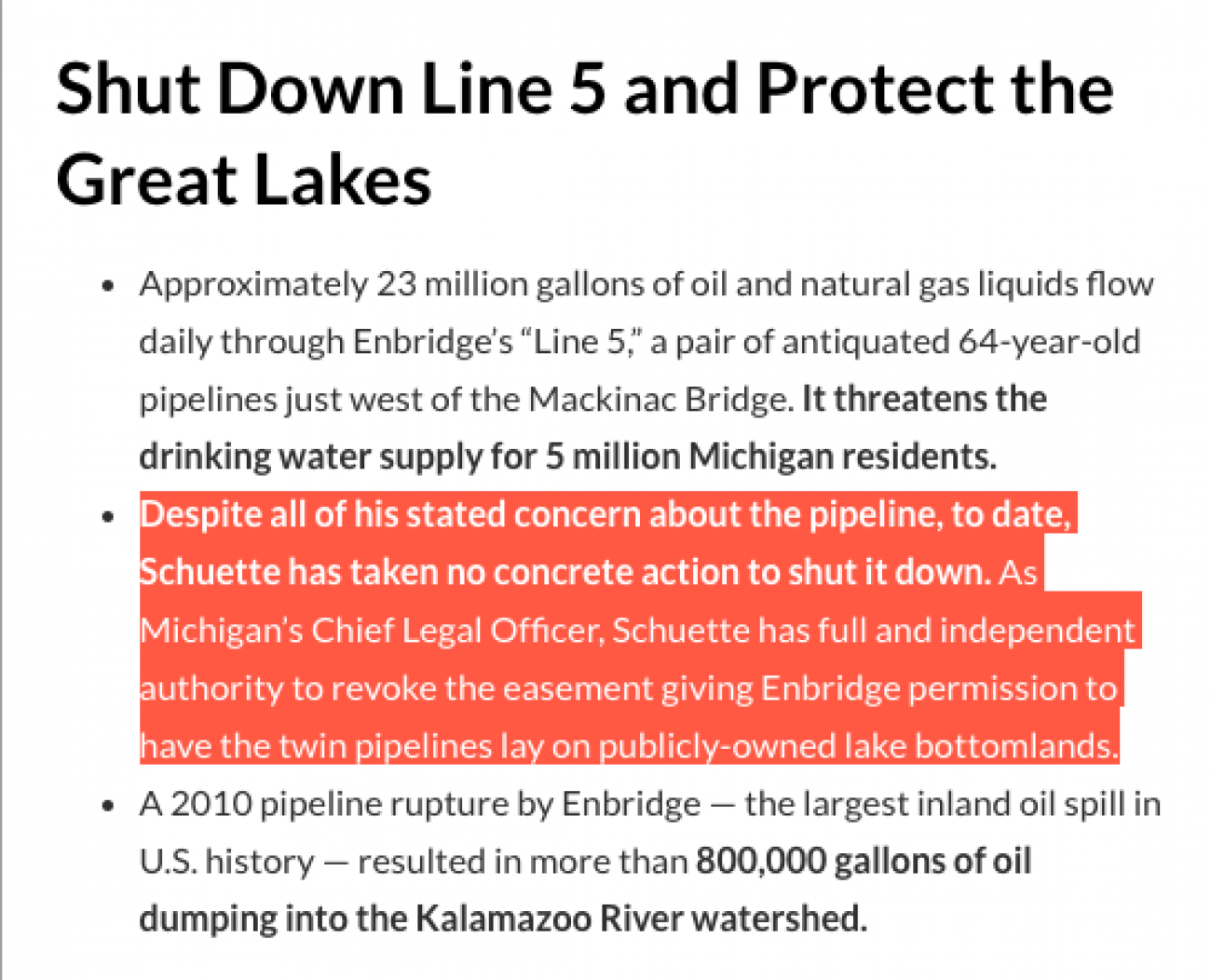 Schuette’s office has taken an active role in the state’s ongoing negotiations with Enbridge over the pipeline.

In July 2015, a task force co-chaired by Schuette released several recommendations about Line 5’s future. It called for a ban on the flow of heavier crude oil as well as an independent analysis of the pipeline’s environmental risk, both of which were implemented.

The task force stopped short of calling for a complete shutdown. But Schuette suggested that a future shutdown remained on the table, according to several media accounts.

Here’s how the nonprofit Midwest Energy News reported his comments at the time:

Schuette could not give a specific timeframe of when it might shut down, but he said alternatives should be studied, as “you would not build a Straits pipeline in this decade. I’m doubtful it will be open in future decades. … Its days are numbered, its duration is limited in my opinion.”

Schuette has since repeated the statement that Line 5’s “days are numbered,” and a campaign spokesman included the line in responding to Bridge Magazine for this story.

The Michigan League of Conservation Voters is seizing on that statement, claiming Schuette isn’t doing everything he can to shut down Line 5.

How could he do that? The conservation group points to a 1953 easement granting Lakehead Pipe Line Company — now Enbridge — the right to use the lake bottom in the Straits as long as it followed several stipulations.  Critics allege Enbridge has violated several provisions, including that the company exercise “due care” for the “safety and welfare of all persons and of all public property.”

And in ongoing negotiations between the state and Enbridge, Schuette’s office has scolded Enbridge for violating requirements related to supports along Line 5 in the Straits.

As attorney general, Schuette could cite the alleged violations and yank the easement, environmental groups argue. The move could put Line 5 — or at least its Straits portion — on a path to decommissioning, they say.

In its 2015 report, the task force Schuette co-chaired acknowledged the state has such a legal trigger, which would face legal scrutiny. The task force concluded the state would have to prove “clear violations” of the easement or an “imminent threat the Straits Pipelines would fail.”

Here’s how the task force described the option:

Critics of a shutdown argue the move would disrupt the region’s energy transportation network and leave the Upper Peninsula without a crucial supply of propane. (The full economic impact is a matter of debate.)

What does Schuette’s campaign say?

“I cannot comment on the legal strategy of the Department of Attorney General,” John Sellek, a campaign spokesman, told Bridge in an email.

Sellek then questioned why past attorneys general — those in office before Line 5 became a major public issue — didn’t face an equal level of scrutiny.

In his email, Sellek reiterated Schuette’s support for protecting Line 5’s Straits section by building a tunnel around it.

A tunnel “would protect the Great Lakes, obviously, by removing the pipelines from the lakebed, where they can be damaged by something as common as an anchor strike” and ensure “they can be easily inspected and separated from our valuable water while still allowing for the safe transport of essential propane that so many families rely on for heating their homes in the U.P.”

(Researchers say a tunnel could take up to seven years to build and cost more than a half billion dollars, and environmentalists oppose the idea.)

Also related to Line 5: Schuette in April filed a lawsuit against a shipping  company whose anchor damaged Line 5 and other cables in the Straits.

And while there’s debate about whether he should revoke Enbridge’s easement, it is true — as described by a task force Schuette co-chaired —  he could argue in court for a Line 5 shutdown but hasn’t.

Still, the group’s campaign could have provided extra context that a shutdown would require a court order, and that Schuette has been involved in ongoing negotiations concerning Line 5’s safety. There’s no question that Schuette’s office has taken less drastic, but concrete, actions on the pipeline.