Michigan’s food truck industry is growing. So is a company that builds them

Aldo Pérez stands inside the skeleton of a truck that will soon be built out with a new custom kitchen. (Bridge photo by Gabriel Guzman)
July 6, 2021
Martina Guzmán
Business Watch
Detroit

Business Watch
Michigan’s food truck industry is growing. So is a company that builds them

DETROIT — Armando Moya spent two years looking for a food trailer. A teppanyaki chef with more than 15 years of experience working in Japanese restaurants, he was ready for his own mobile business — and a custom design.

He scoured the internet for food truck manufacturers and found businesses in California and Texas who would make what he wanted, but they were too far. What if something went wrong with the truck? Who would he call? Moya kept searching.

Then one day while driving down West Vernor Highway in Southwest Detroit, his wife noticed that Mexican restaurant El Nacimiento had a brand-new food truck parked in the parking lot. They pulled over and asked the owner where he bought it. The owner sent them to Aldo Pérez at Salpicon Food Trucks.

Pérez is one of a handful of people in Southeast Michigan building and selling the mobile kitchens.  What started out as a hobby for Pérez is now a thriving business. 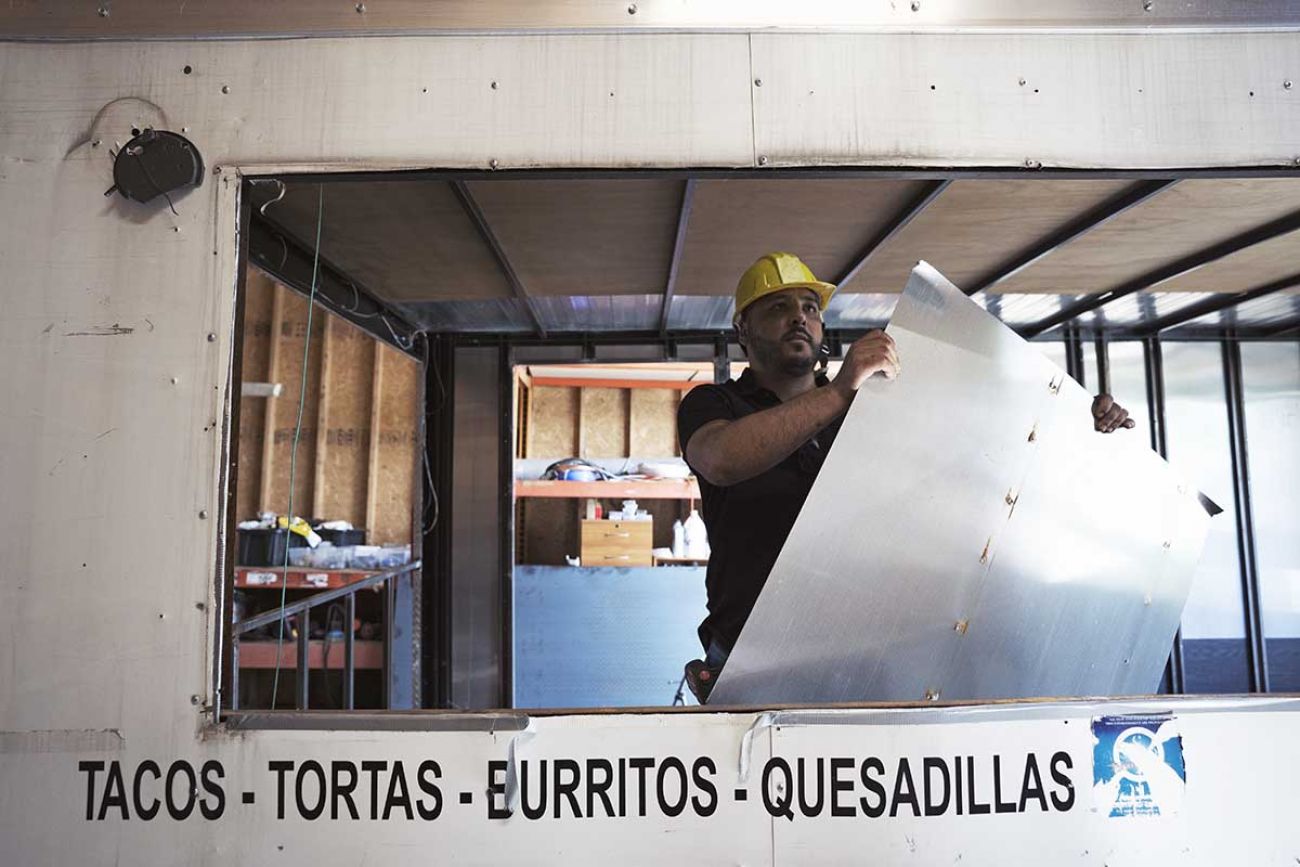 And thanks to a growing number of food entrepreneurs like Moya who are looking to avoid the expense of full-service dining, Pérez is filling a need for custom food trucks designed and built by local companies.

The food truck industry in the U.S. brings in $1.2 billion in yearly revenue, according to IBIS Marketing. The industry is growing at an annualized rate of 7.5 percent between 2016-2021, outpacing the broader food service sector.

The nexus of Aldo Pérez’s food truck empire is on West Vernor Highway and Dix Street in Southwest Detroit. The Salpicon Food Trucks work-shed is surrounded by a large gravel parking lot where trucks sit at various stages of completion. One is completely hollowed out, another has a brand-new custom kitchen, and another waits for the graphics and a wrap to be applied. About half a dozen others sit in line like ladies at a beauty parlor waiting for their makeover.

Pérez walks around the shed with his four-year-old in tow and a cell phone to his ear telling a customer that it will take three to four months to build him a truck. His phone rings non-stop now, but it took a few years to get there.

He built his very first food truck for himself in 2015. Pérez wanted to sell the seafood dishes of his hometown of Nayarit, Jalisco to the Mexican diaspora in Southwest Detroit. Sales were great in the summer, but selling cold dishes like tostadas de ceviche and cocteles de camaron wasn’t popular in the winter. The truck was too much of a commitment for only three to four months out of the year.

He listed his food truck for sale, not knowing what they cost. He immediately sold it for $15,000, enough to recoup his material costs to build out the truck.

But days later, he saw the exact same food truck had just sold on Craigslist for $40,000. The guy who bought it, flipped it. Pérez was shocked.

From part-time hobby to full-time business

Three years after building his first truck, taqueros kept coming around and asking Pérez to build one for them. After each truck was constructed and delivered, he saw that this had the potential to be a profitable business.  After building his fifth truck, he went on a research trip.

“I went to Florida to talk to [food truck manufacturing] companies there because I wanted to know exactly what they do and why they charge so much,” Pérez said. “I saw the work they were producing, and I knew my work was better.”

There are food trucks that you can drive — sometimes made out of former bread or UPS delivery trucks — and food trailers that you can hitch. Both come in different sizes. Pérez says a truck or trailer can cost anywhere from $50,000 – $100,000 depending on custom details. 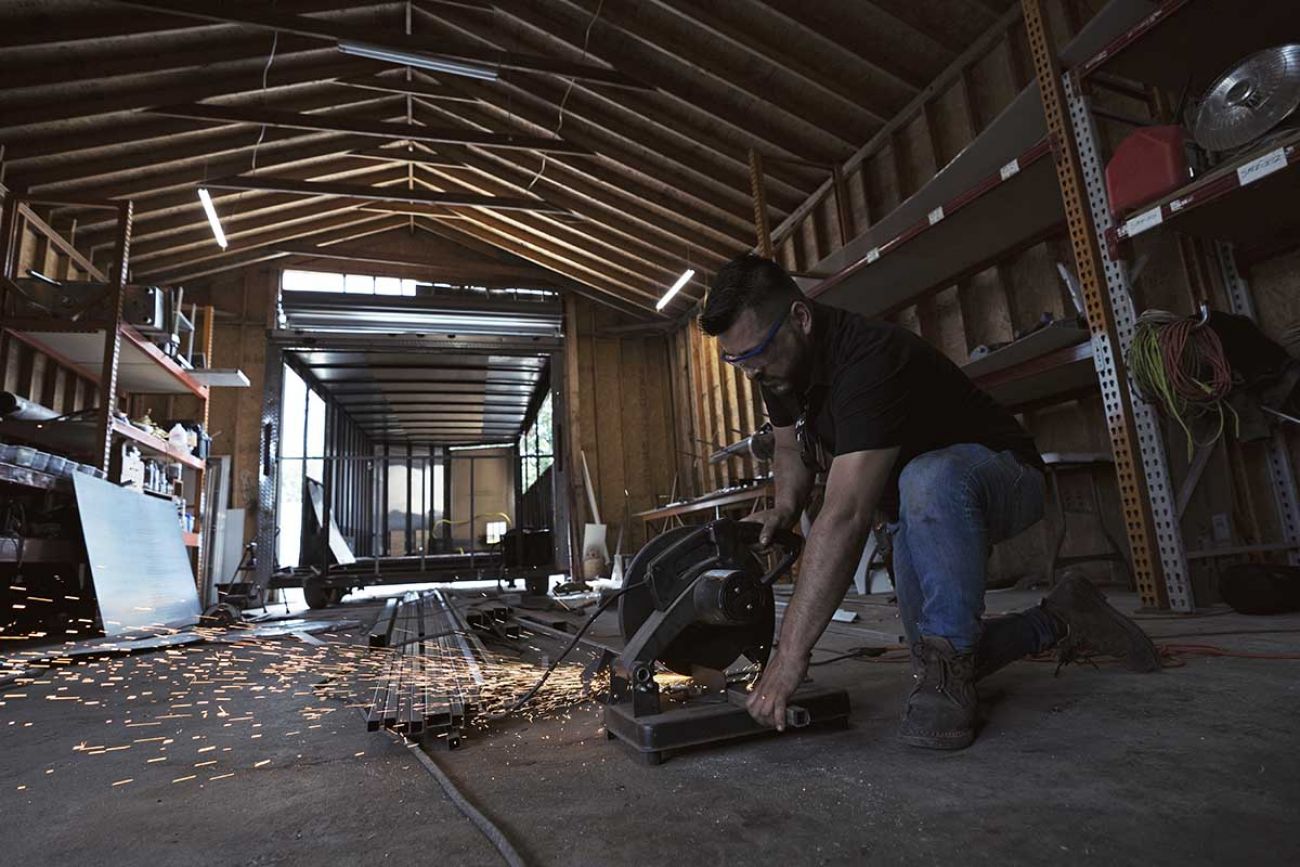 Self-taught as a builder, Aldo Pérez now hopes to expand Salpicon Food Trucks by helping entrepreneurs get into the industry. (Bridge photo by Gabriel Guzman)

When the pandemic raged in early 2020 and businesses in Michigan closed due to executive order, food trucks became a lifeline to restaurants and to budding restaurateurs and chefs. Not only were they a way to stay open, but they were a way for restaurant owners to stay connected to their customers.

That year everything changed for Pérez. Salpicon Food Trucks officially launched in October 2020 with a request for a proposal.

At the beginning of the pandemic, Collin Karcher, owner and operator of Delray Barbecue, a catering company that specializes in slow-roasted pork, had just inherited a pig roaster after his parents moved to Mississippi.

“I'm like, ‘What the hell am I going to do with this thing?’” Karcher wondered.

Then he decided to roast a pig for a birthday party, and orders for whole roasted pigs immediately started to come in.

“I wanted to start making money on it, then it quickly rolled into, we need a menu, we need sides, we need all of this,” Karcher said. “I realized we needed a medium to serve out of that was licensed. So, the food truck was the best option at that point.”

But where does one buy a food truck In Michigan? While there are some listing services for sellers, there aren’t food truck dealers in the way that there are car dealers where you can walk onto a lot and pick the one you want.

“I didn’t know where to start,” Karcher said.

He found a producer in Georgia capable of something built to order and put down a deposit.  But the company suffered some layoffs during the pandemic, and ended up without the right staff to customize Karcher’s food truck.

“It really just didn't work out at that point,” Karcher said.

Food truck entrepreneurs in Southeast Michigan say there is no central association, agency or directory for their business in the state, leaving them to scour the internet for answers to their many questions.

Karcher was thrilled to meet a local builder and he was ready to buy. But because he was financing his truck through a bank, he needed to work with an established vendor.

Until that point, Pérez had been a cash operator. The request for a bid prompted him to officially establish his business. His first call was to Puente, a small, bilingual consulting firm that caters to Latino entrepreneurs.

“We helped Aldo register his LLC, and strategize for exponential growth,” said Bridget Espinosa, Puente's owner and principal consultant. “We helped to formalize his business practices.”

Pérez set up a Facebook page and joined Facebook food truck groups to get the word out that he was in business and ready for orders.

He’s gotten so busy that Espinosa says that at the rate Pérez is doing business, Salpicon Food Trucks is poised to gross $1 million dollars in revenue by the end of 2021.

Teppanyaki chef Armando Moya  was excited to meet Pérez. He told him he envisioned a trailer with a giant window and hoped Pérez could build it.

“Food trucks have tiny windows that move side to side,” Moya said. “That wasn’t going to work for me.”

He wanted customers to have the same experience as in the restaurant where his cooking is a performance of tossing food in the air, making a volcano out of sliced onions and showing off his knife skills.

Pérez suggested extending the cab by several feet. The extra space would allow them to satisfy all of Moya’s wishes.

“My truck has two giant windows and two grills,” Moya said. “I didn’t want a fryer, so we were able to add two extra coolers and a built-in rice cooker, something you only see in restaurants.”

Moya has since christened his truck and his business, Sakura Hibachi. 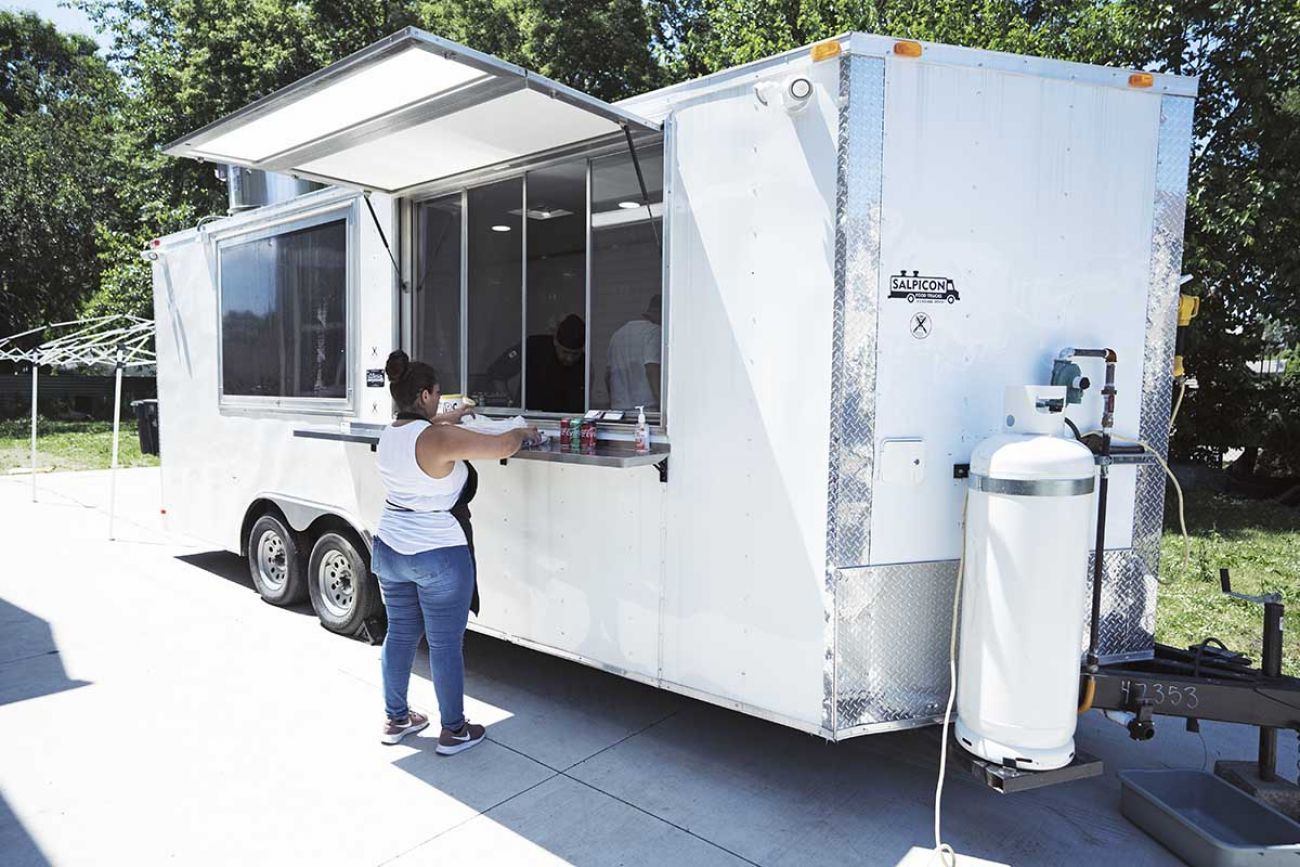 “Aldo made me my dream truck,” Moya said.

He now sets up every weekend in Southwest Detroit making Japanese hibachi-style food with a Mexican twist.

While Pérez began by catering specifically to the Spanish speaking community, carving out a niche in the market by supplying to the Latinos who have food businesses across the state, his reach has grown. Since formalizing Salpicon Food Trucks, Pérez gets calls from across Southeast Michigan and out of state.

Two months ago, he delivered a truck to a customer in Ohio and is now making trucks for customers in North Carolina and Tennessee.

Now he’s starting to think about what’s next.

“I have a vision now,” Pérez said, describing a business that will help the entire industry grow. “I want a shop where clients can get custom food truck design, fabrication and permits.”