The smoker outside of the newly opened Side Door Kitchen stays busy. Some days, it’s turkey. Or a pile of red habanero peppers. On weekends, anyone driving past its location in an industrial building southeast of Jackson can’t miss the scent of slow-cooking pork.

The coronavirus pandemic devastated Michigan’s restaurant industry. But in the small community of Napoleon, Marissa Olmstead prepares ingredients for her menu with nothing but confidence.

“Some people are a little shocked,” Olmstead said, describing reaction as she spread the word about the mid-March opening of the restaurant, which she co-owns with her stepfather, Chris Sirvinskis.

“And some people think it’s kind of scary,” she said. “But we’re willing to take the chance.”

Owning a restaurant is a new role for Olmstead, a former corporate chef who lost her job at the start of the pandemic, went back to work, then realized she’d rather pursue her dream of opening her own restaurant.

Now she and Sirvinskis, who used to own a barbecue restaurant in Livingston County, are hoping to build loyal clientele at a time when the outlook for the industry remains grim: One in six U.S. restaurants closed during the pandemic and the industry lost $270 billion in sales over the past year.

That’s not stopping Olmstead, or the small but growing number of Michigan entrepreneurs who are finding new restaurant opportunities in ads for vacant diners or sold-out food truck events. For people who love to cook and want to create their own concept, COVID restrictions are just one more barrier to overcome. After all, Olmstead noted, the restaurant business is “risky with or without COVID.”

Yet the past year set new records for failure: An estimated 3,000 Michigan restaurants closed since March 2020 because of the pandemic, estimates Justin Winslow, CEO of the Michigan Restaurant & Lodging Association.

Still undetermined is the final toll of COVID-19 on the industry, which was allowed to open indoor dining rooms at 50 percent capacity as of March 5. Many operators say that limitation is not viable long-term, especially as they head into a second year of days that restaurants depend on for high traffic and revenue: Easter, Mother’s Day, graduations.

Critics of opening dining rooms at all during the pandemic point to Michigan’s spiking infection rate, the nation’s worst. Concerns about staff falling ill, or infection spreading to customers, are keeping about 40 percent of potential customers home, according to a recent industry survey.

But the long-term outlook for the industry remains strong, Winslow said, as customers express pent-up demand for socializing over food and beverages and look toward the day when most of the state’s population is vaccinated against the virus.

“If you have the capital (to open or restart a restaurant business), it would be smart to get back in now,” Winslow said.

The loss of thousands of restaurants will leave a void in the market, he predicted. A rebound, he said, “is inevitably coming, despite our setback of the moment.”

Owners of what independent restaurants opening so far this year in Michigan are counting on that.

“One way or another, people are always going to have to eat,” said Mike Mudrey, who just opened For Crêpe Sake in East Lansing with Gina Mudrey, his wife. “We just put our heads down and said, ‘We’re going to do it no matter what.’”

Chelsie and Jono Brymer had expanded their Promenade Artisan Foods from the original Trenton location to a second in Wyandotte before COVID hit. But the newer Downriver Detroit restaurant didn’t survive the March 2020 state shutdown.

Yet the couple adapted by recognizing there was a market for prepared foods, including family meals and boxed lunches for hospital staff built around their signature quiches and homemade baked goods and sauces. They also sold food ordered “for a lot of memorials,” Chelsie Brymer said of their work during the pandemic.

The food packaging business for take-out and delivery grew until they needed to find additional kitchen space — a quest that led them to the Fisher Building in Detroit.

The Brymers found the space, along with room to operate a cafe. It fully opened on March 18. 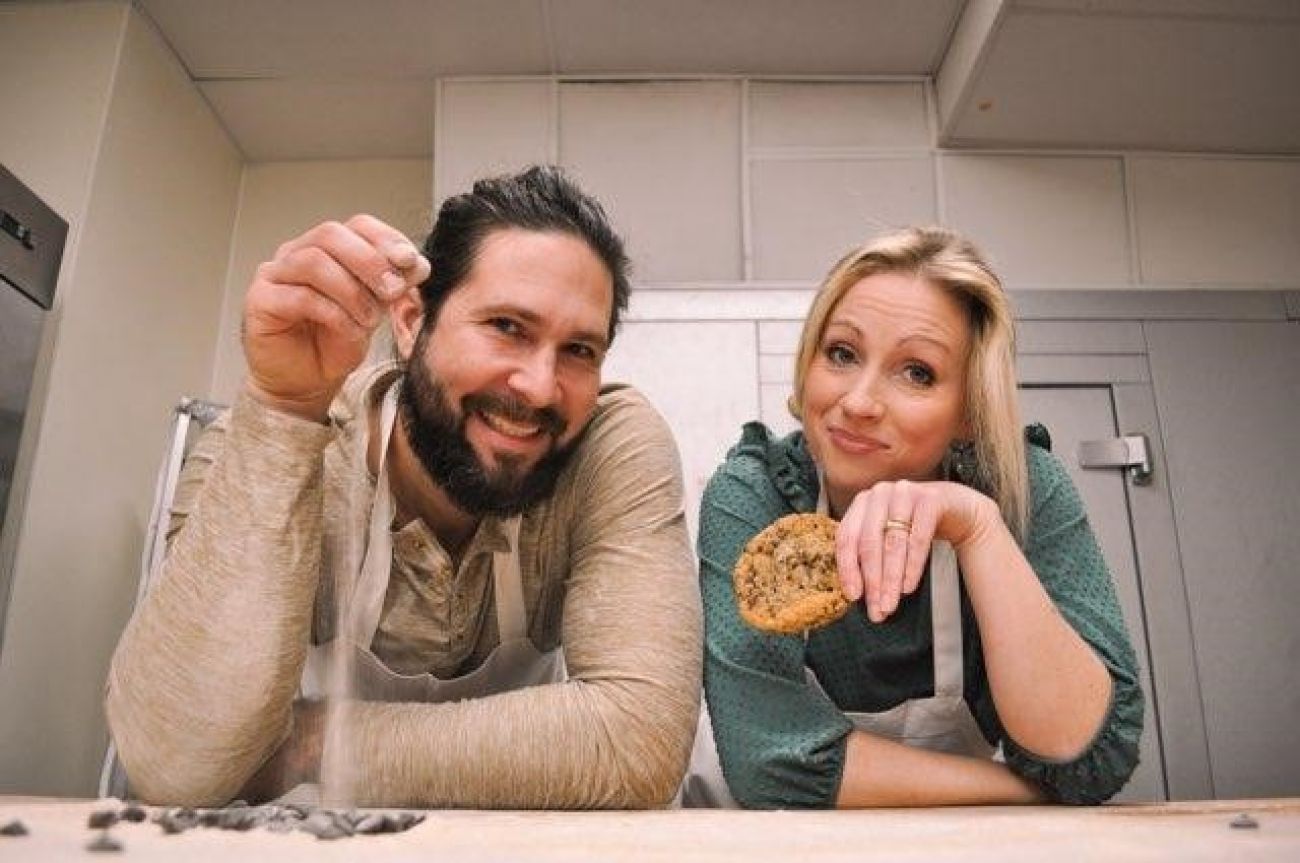 Jono and Chelsie Brymer were looking for kitchen space when they found a deal that included room to open a cafe in the Fisher Building in Detroit. (Courtesy Photo)

“I would have never have dreamed that the Fisher Building would be a spot for us,” said Chelsie Brymer, who calls the move into the iconic Detroit building “a dream come true.”

The building’s owners, The Platform, worked out a deal that allows the Brymers to get their needed kitchen, and also operate what’s hoped to become a neighborhood gathering place and a service for office workers when more return to the building, Chelsie Brymer said.

Before the pandemic, the couple worked with a staff of 24, and that’s dropped to seven. They now work 60 hour weeks, a reality for many new restaurant owners this year as they absorb many of the tasks that employees used to do.

Still, she said, “there’s a lot of opportunity to be successful without having to be really strapped with overhead (costs).”

Capital can be an issue, particularly when it comes to rental rates for their spaces, restaurateurs said.

Jordan Balduf started Side Biscuit in Ann Arbor with little overhead, moving into the 270-square-foot space with the help of investors — friends and customers — after he recognized he was ready to take the leap, but didn’t have the savings to bankroll it. 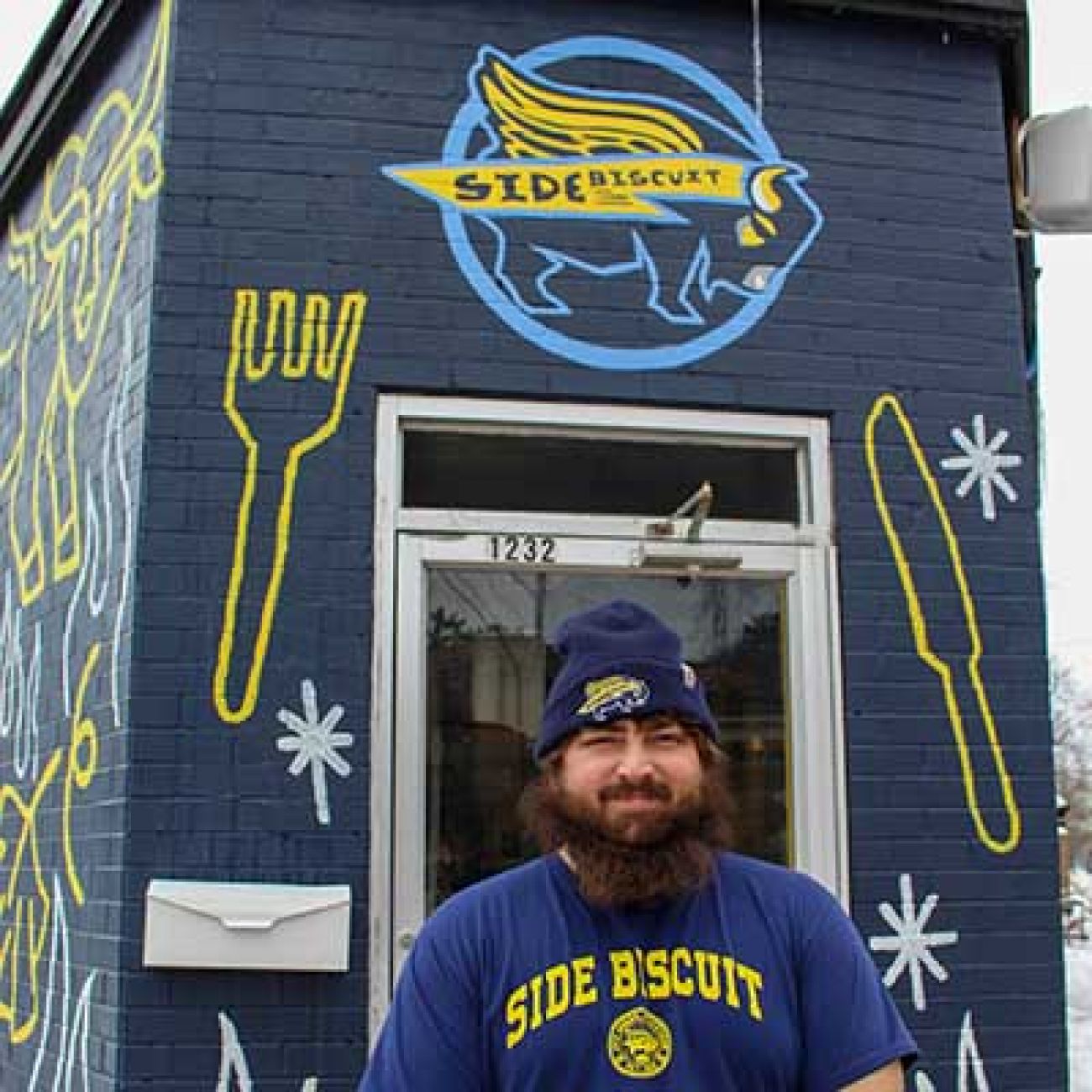 Jordan Balduf’s Side Biscuit restaurant in Ann Arbor specializes in chicken wings, made with a chef’s flair. (Courtesy Photo)

Mike and Gina Mudrey had the safety net of his full-time job and savings from closing their restaurant in downtown Lansing. The new location near the Michigan State University campus in East Lansing, in an alley off M.A.C. Avenue, is amid a hub of activity, from MSU students and nearby residents, many of whom now work from home.

The couple signed a lease for the space about a month before the pandemic prompted stay-at-home orders in March 2020. “We probably could have gotten out of the lease,” Mike Mudrey said, “but we decided that, long-term, we wanted that restaurant.”

It wasn’t the pair’s only financial  leap during the pandemic: They also bought Brown Butter Creperie and Cafe, located on Wealthy Street in Grand Rapids, in June, and reopened it to the public in July. That is where the Mudreys learned about reopening safety protocols and polished their menu knowing that by this spring, they’d open the sister restaurant in East Lansing with similar offerings. Like the Brymers, some of it is built around carryout, which allows them to serve diners and package partially prepared offerings in a 1,300-square-foot space.

“By not opening something massive, hopefully we won’t require as much business to sustain it,” Mike Mudrey said.

That was Balduf’s plan in Ann Arbor, too. After losing his job as an executive chef at a local brewery, he’d grown a big following after starting a pop-up chicken wing food cart operated out of his driveway. With 170 orders offered weekly, all would sell out. So would food prepared at other sites.

That success emboldened him to open Side Biscuit in March. 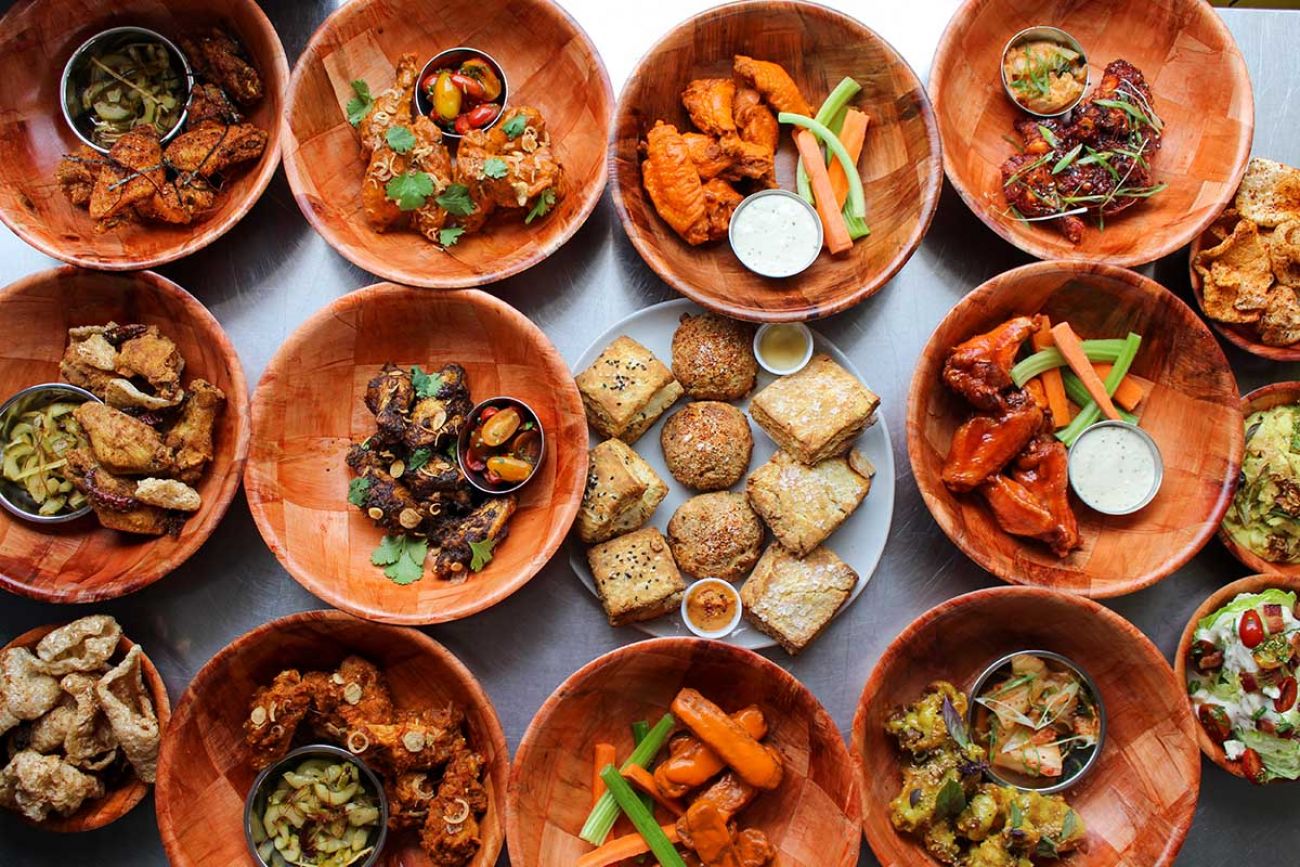 Jordan Balduf’s Side Biscuit restaurant in Ann Arbor specializes in chicken wings, made with a chef’s flair. (Courtesy Photo)

“This is a great, great opportunity,” he said, recognizing that others in the industry aren’t experiencing the same optimism. “I know a lot of people are leaving the industry due to the fact that it’s pretty inconsistent and unreliable at this point.”

Yet Balduf said he thinks he is on the forefront of still more changes in the restaurant industry. One example is the wave of food trucks traveling to different venues, such as neighborhood wine shops, turning the site into a pop up restaurant. More casual fare and intimate settings — sometimes in temporary locations — are likely on the horizon. And portability will remain a driver for success, even when full dining rooms are allowed to reopen.

“The culinary map is going to change immensely,” Balduf said. “And real estate-wise, people are realizing you don’t have to spend $10,000 a month (for prime lease space) to put people into chairs.”

The new restaurateurs know many fellow owners are struggling, and they’re sensitive to the plight of the industry.

Balduf said heavy overhead, like lease payments for a space that can’t be used during pandemic shutdowns, can expose flaws in business plans. Even in the best times, he said, “(profit) margins are always tough in food.”

But he said he’s hopeful owners and chefs at many places that are struggling will return to the passion that got them into the business. The industry, he said, “already has been really inventive in this past year.”

While starting a new restaurant during a pandemic offers “lots of opportunities for anxiety,” Chelsie Brymer said, the Brymers know they’re not alone in adapting and seeking opportunities.

“We no longer have a vision for what a perfect 2021 will be,” she said. “We’re just here and doing whatever it takes.”