Nessel has a conflict of interest in the case because DePerno is her likely opponent for re-election in November, assistant attorney general Danielle Hagaman-Clark explained in the Friday petition to the Michigan Prosecuting Attorneys Coordinating Council.

The vote machine probe began in February, before DePerno won the Michigan GOP's endorsement convention with backing from former President Donald Trump. During the probe, "facts were developed that DePerno was one of the prime instigators of the conspiracy," Hagaman-Clark wrote.

At issue are voting machines used in the 2020 presidential election, and potentially criminal attempts to access those machines to try and prove Trump's unsubstantiated claims that voter fraud cost him that year's contest.

The investigation determined DePerno, Rendon and Juntilla were part of a group that  "gained unauthorized access and compromised tabulators" in Roscommon County, Richfield Township, Lake Township and Irving Township between March and June of 2021, Chief Deputy Attorney General Christina Grossi disclosed in a Friday letter to Secretary of State Jocelyn Benson.

Information gathered from the allegedly breached machines in Richfield Township and Roscommon County later appeared in subpoenas and court documents that DePerno submitted in a failed lawsuit over results reporting errors in Antrim County, according to Grossi.

DePerno "categorically denies" the allegations, campaign manager Tyson Shepard said late Sunday in a series of statements. He called the petition for a special prosecutor a "liberal fever dream of lies" based on “political prosecution.”

"This is a complete absurdity that shows the tactics of the institutional left, and Matt DePerno looks forward to defeating (Nessel) and bringing back order to this office in November,” he said.

On Telegram, Logan blasted Nessel for the special prosecutor request, adding, "the American people are smarter than this, and this will backfire."

DePerno is an attorney whose Antrim County lawsuit made him a national figure in the "stop the steal" movement and a favorite of Trump. Michigan Republican Party delegates endorsed DePerno for attorney general in April and are expected to make the nomination official at an Aug. 27 convention.

Shepard did not address the allegations that DePerno used information from breached voting machines in his legal filings. And he did not respond to a request for additional comment.

In a Monday radio interview, DePerno called the allegations "total garbage," adding "we did nothing illegal." 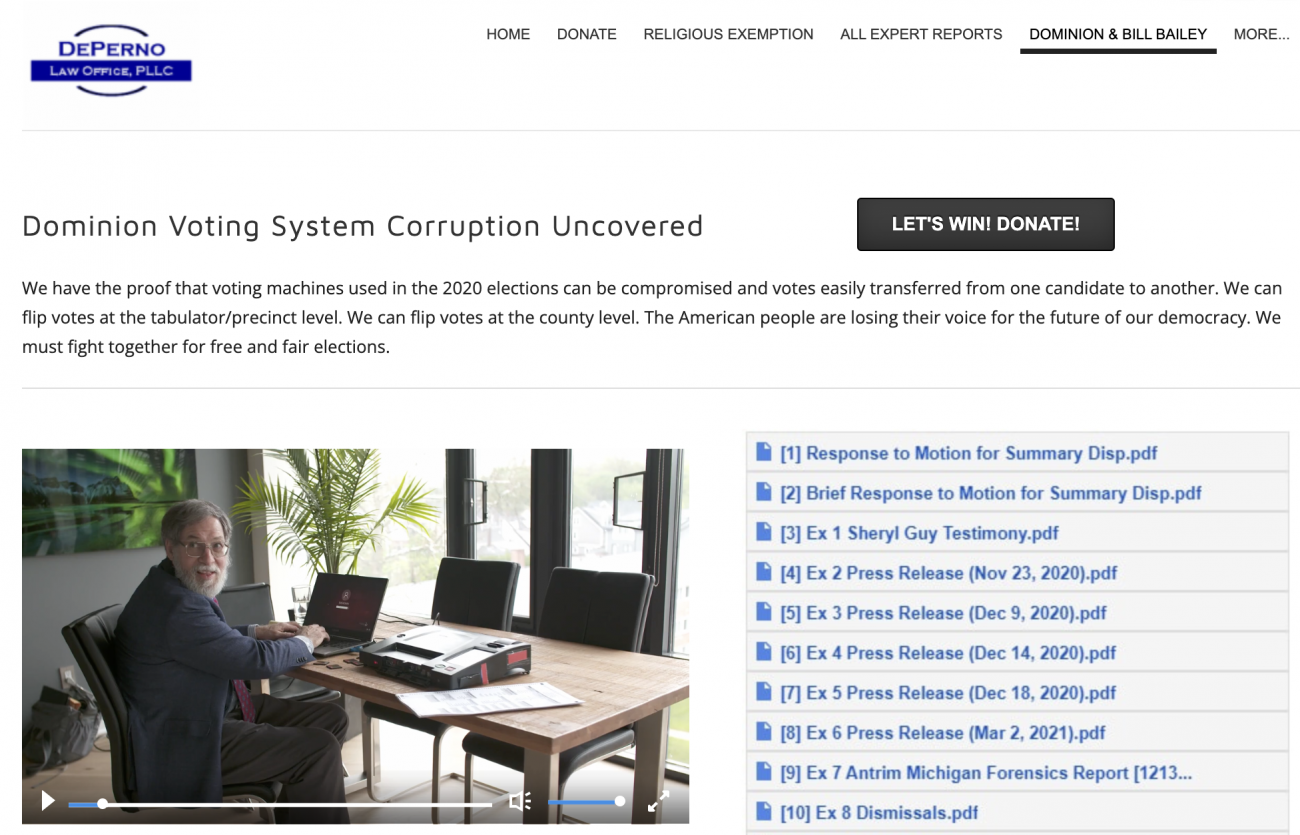 Matthew DePerno's web page appears to shows a vote tabulator, which the Michigan Attorney General Office says was breached in possible violation of state law. Pictured is Jeff Lenberg, whom state attorneys identify as part of a group who "gained unauthorized access and compromised tabulators." (Screenshot)

All five of the voting machines were allegedly taken to hotels or rented Airbnb properties in Oakland County. There, Lenberg, Cotton, Penrose and Logan "broke into the tabulators and performed 'tests' on the equipment," according to Hagaman-Clark’s petition. "It was determined during the investigation that DePerno was present at a hotel room during such 'testing.'"

DePerno also included a photo of an ES&S modem as an exhibit in the Antrim Case that came from the Roscommon County tabulator, Clerk Michelle Stevenson told investigators.

Video footage on DePerno’s website shows a Dominion voting machine that resembles the missing Lake Township tabulator, including red tape on the side of the unit, Grossi noted in her letter, which was first reported by The Detroit News and obtained by Bridge Michigan.

Rendon allegedly contacted local clerks in Roscommon County, Richfield Township, Lake Township and told them to turn over the machines as part of an "investigation into election fraud,” falsely claiming the state House was leading a probe.

Under Michigan law, it is a five-year felony for a person to "obtain undo possession" of a voting machine. In her letter, Grossi also noted the potential for five-year felony conspiracy charges, along with "potential civil liability" related to unauthorized release and destruction of government property.

Nessel, first-term Democrat, has repeatedly said she would seek a special prosecutor should her office's election machine tampering probe lead to findings against DePerno.

Nessel cannot comment on the case because it is "still an open investigation," Nessel's office said Monday morning. The Department of Attorney General is also asking the Attorney Grievance Commission to investigate DePerno and Lambert Juntilla for potential professional misconduct, according to a release.

While Benson requested the vote machine probe in February, a Republican-led state Senate committee had earlier alluded to DePerno in asking Nessel to investigate “those who have been utilizing misleading and false information about Antrim County to raise money or publicity for their own ends.”

DePerno represented a local activist in a lawsuit seeking a "forensic audit" following 2020 election results reporting in Antrim County. While he has lost at lower leaves, DePerno has appealed to the Michigan Supreme Court, where justices have not yet decided whether to consider the case.

The Antrim County case, and a report prepared by a team DePerno allowed to examine a Dominion machine there, spawned global conspiracy theories about voting tabulators and fueled Trump's efforts to overturn the 2020 election.

Benson, in a statement, thanked Nessel for the vote machine tampering investigation and for referring the case for possible prosecution.

“There must be consequences for those who broke the law to undermine our elections in order to advance their own political agendas," Benson said, vowing to make sure clerks across the state "are equipped with a full understanding of the legal protections in place to block bad actors from pressuring them to gain access to secure election systems."