The newly created Michigan Independent Citizens Redistricting Commission and the Michigan Secretary of State filed a lawsuit in April asking the court to extend the deadline to have new maps available for the public by 72 days to Dec. 11.

The lawsuit contends the original deadline is not realistic because the U.S. Census Bureau has delayed releasing the official population counts needed to draw new districts until Sept. 30 — and the public by law needs a chance to weigh in on the maps.

“This is a rare and extreme circumstance — the census data has never been delayed in this fashion, this is unprecedented,” Julianne Pastula, the redistricting commission’s general counsel, told the justices Monday.

Pastula said the commission worries that, without an extension, it would not be able to fulfill its constitutional duty of drawing and adopting 161 congressional and state legislative districts by Nov. 1.

Republicans oppose the extension, and at least two justices expressed concern about extending a deadline that hasn’t yet been missed. The court didn't issue a decision Monday.

“You're asking for advanced permission to not have to follow the Constitution,” said Justice David Viviano, equating an extension to a “Get Out of Jail Free” card in the board game Monopoly.

“That's pretty unique in Michigan's history as far as I can see.”

Districts are redrawn every 10 years after the U.S. Census Bureau releases population counts, but the COVID-19 pandemic and creation of an independent commission have complicated the task this year in Michigan.

Because of difficulty in collecting data during the coronavirus and other anomalies, the release of Census data has been delayed several months.

Michigan created the 13-member independent commission to draw new political districts through a voter-approved constitutional amendment in 2018. For decades, the lines had been drawn by whatever political party was in power in Lansing, which resulted in some of the most gerrymandered districts in the United States. The soon-to-be-changed political boundaries currently favor Republicans, since they were in power a decade ago when the lines were last drawn.

The voter-approved amendment spelled out an explicit timeline for approving the new maps — including at least five public hearings and 45 days for public comment.

“We cannot honor the public comment period...We have a legal conflict. We have an impossibility facing us right now,” said Heather Meingast, an assistant attorney general for the state who spoke in favor of the petition.

If the commission misses deadlines set up by the constitution, legal challenges are possible, she told the judges.

“We are trying to be proactive and preemptive to get the commission off to the best footing that it can — and the people themselves —so that we could have constitutionally-drawn plans with input from the public,” Meingast said.

Lawyers arguing against an extension in Michigan told the court the justices shouldn't weigh in until the commission proves it can't meet the deadlines. But Richard Bernstein, a Democratic-appointed justice, hinted that an extension might be prudent.

“Every now and then, can't we just do something that makes sense, and get it right and make sure that we have an appropriate accounting so we understand the census and we understand the implications, and that we just really get this one right?” Bernstein asked.

“Why can't we just use what is necessary, the tools at our disposal in a timely fashion, considering the fact that we're going through a pandemic event?” 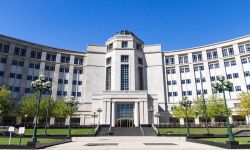 Who are the five candidates running for Michigan Supreme Court?