GAYLORD—It’s a Thursday evening and the parking lot of the Treetops Resort convention center is packed.

Inside, about 100 people are sitting in rows of socially-distanced chairs before the Michigan Independent Citizens Redistricting Commission, the group tasked with redrawing state legislative and congressional districts that will govern Michigan elections for the next decade. 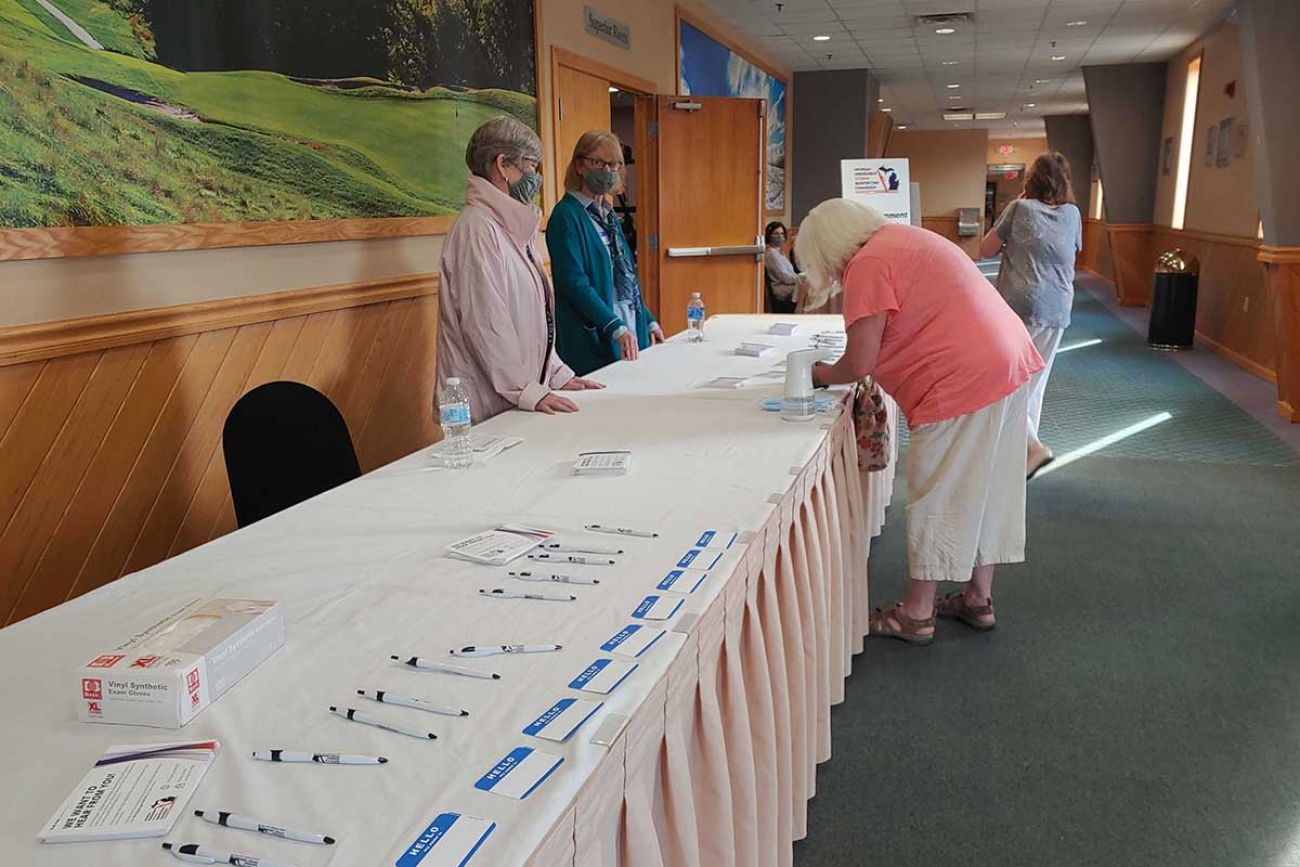 A resident signs up to speak in May at Michigan Independent Redistricting Citizens Commission hearing in Gaylord. (Bridge photo by Sergio Martínez-Beltrán)

Daren Rubingh, a dairy farmer from Antrim County, walked toward a microphone in the middle of the room and laid out his case: Farmers should be clustered together in new districts.

“I just finished milking the cows and had a 15-minute drive to this location,” Rubingh, 29, the chair of the Antrim County Republican Party told commissioners.

“Local farmers get together to discuss how we can benefit agriculture in Antrim County, and northern Michigan by working on issues such as property rights, taxes, environmental quality.”

The comment is one of hundreds the 13-member commission has heard in the past five weeks, as it travels the state to seek input on the complicated and polarizing process of how to shape political districts that don’t unfairly advantage a particular party. Hearings continue through July 1.

The public feedback — which ranged from using school districts as building blocks of the new maps and keeping religious communities together to taking into consideration the urban-rural divide — will be considered when the group creates the new districts.

It’s not going to be easy — and not everyone will be happy, said Robert LaBrant, a retired strategist who masterminded Republican redistricting efforts in Michigan in 2011.

“Redistricting is actively the most political decision to be made in a state every decade,” LaBrant told Bridge Michigan.

LaBrant helped draw existing districts, which federal judges have since called a “political gerrymander of historic proportions.” In 2018, voters approved a measure to create the commission and wrest redistricting away from whichever political party is in power in Lansing.

Using the 2020 Census, the independent commission is expected to draw 13 congressional districts, 110 state House districts and 38 state Senate districts in time for the 2022 election.

Here are the remaining public hearings from the Michigan Independent Citizens Redistricting Commission:

All meetings start at 5 p.m.

The group needs to contend with the loss of one congressional seat because of slow population growth. Among the challenges: Districts have to align by population (210,000 to 250,000 residents per state Senate district, about 700,000 per congressional district) and consider keeping intact “communities of interest” that share historical, economical or cultural similarities and concerns.

The commission also is expected to draw fair districts in a divided state: Michigan’s congressional delegation is now 7-7 among Democrats and Republicans, and the state is overwhelmingly Republican in rural areas and predominantly Democratic in urban ones.

All told, that means there are plenty of ideas about how the redistricting process should unfold, as Bridge Michigan learned by attending multiple hearings this spring.

Here are some of the more intriguing ideas:

Idea No. 1: School districts as foundation of maps

Laurence Kloss, a former member of the Ann Arbor Board of Education, argued that Michigan’s 891 school districts shouldn’t be divided during redistricting.

Kloss said he lives within the Ann Arbor Public Schools district, but his community was “cracked” or split and doesn’t vote with the rest of the school district.

Michigan’s school districts often don’t adhere to municipal boundaries (there are three alone in the Macomb County city of St. Clair Shores), and it’s not uncommon for them to be divided among congressional districts.

Holland Public Schools in west Michigan, for instance, is on the border of Ottawa and Allegan counties — and 817 students live in Allegan while 2,165 live in Ottawa.

“To keep us the way we are represented by one House district really does make a lot of sense,” Lang said.

School districts as building blocks is a “reasonable starting point, but it potentially has trade offs,” because they can extend into other counties, said Matt Grossmann, director of the Institute for Public Policy and Social Research at Michigan State University.

He added that many people recognize school districts — rather than their municipality — as their place of residence. Okemos is an unincorporated community outside of Lansing, for instance, but people that live in the Okemos Public Schools district can put ‘Okemos’ as their postal service address.

“So school districts have become another local jurisdiction that people recognize, even though it's not really a city or government,” Grossmann said.

As with school districts, speakers encouraged the commission to be creative when drawing the maps and use more than just traditional municipal boundaries.

Among the ideas in recent weeks were to use parks or religious communities as clusters to begin piecing together the district lines.

Ted Weiser of Ypsilanti Township told commissioners about a recent camping trip in Sugarloaf Lake Campground, between Waterloo, which is in Jackson County, and Chelsea, which is in Washtenaw County.

“As far as I know, my wife Wanda may have slept in Jackson County last night, and I slept in Washtenaw County,” Weiser said.

While both counties are in Michigan’s 7th Congressional District, represented by Republican Rep. Tim Walberg, each county has different House and state lawmakers.

Likewise, religious communities flow beyond city borders — and Chris Murphy, pastor of Horton Congregational Church in Jackson County said the commission should work to keep them together.

She said that five years ago her community created a joint operating agreement that includes two Methodist churches, a Free Will Baptist church, and a nondenominational church in the Hanover-Horton area.

“So, because of the things that we do together, I think we are a group of like-minded people. And we are all doing this for one purpose: the purpose of Jesus Christ,” Murphy told the commission during a hearing last month in Jackson.

The idea may have some merit — but ultimately the commission has to rely on maps to draw the districts.

“I think certainly a religious community is a community of interest,” said John Chamberlin, a professor emeritus of political science and public policy at the University of Michigan.

“The commission could decide, ‘Let’s think about school districts as pieces of the puzzle.’ They really can’t do that on their own with religious communities.”

LaBrant, who helped draw districts for Republicans, rejected the idea of considering congregations, calling it “offensive.”

“Are we going to gerrymander districts around Catholics or Muslims?” LaBrant asked. “It’s a perversion of the community of interests. We don’t have that on the Census, so that would be another subjective criteria.”

Idea No. 3: The urban/rural divide

One issue that residents brought up repeatedly is that new districts should reflect the differences between urban and the rural communities.

Some districts are now mostly rural, such as the 1st Congressional District, which encompasses the Upper Peninsula and 17 counties in the Lower Peninsula including Grand Traverse, Manistee and Mason Counties.

Others are predominantly urban or inner-ring, such as the 13th Congressional District in southeast Michigan that includes Inkster, Romulus, Westland and much of Detroit.

But some districts are so sprawling they cover rural and urban areas, leading to complaints about equity and fair representation.

Julie Hartshorn lives in an area of East Lansing that falls under the jurisdiction of Clinton County. This means she is part of Michigan’s 4th Congressional District, represented by Rep. John Moolenaar, R-Midland.

“My parents who have retired up to Higgins Lake (in Roscommon County) are literally one block from sharing the same congressional district as me, which they're nearly two hours away,” Hartshorn said.

She said she wants to be in a district that represents where she does more of her errands.

“My belief is that since I work, shop and play in Lansing or East Lansing, that I should be sharing the same congressional district,” Hartshorn said. “My issues may not be the same as somebody that lives up in, let's say, Big Rapids or Mount Pleasant.”

Eileeen Brooker of Lansing told the commission the new maps should ensure that votes in Greater Lansing are not diluted.

The area covers Clinton, Eaton and Ingham counties. However, each of those three counties is in a different congressional district: Clinton is part of the 4th, Eaton is in the 7th, while Ingham is part of the 8th.

Brooker said those in Eaton County are placed in a district that is predominantly rural, “diluting their vote.”

“Gerrymandering must stop now,” Brooker said. “Fair districting is what we demand now.”

There are going to have to be tradeoffs, said Grossmann of MSU.

“If you have similar people in districts that can be good in terms of representation,” Grossmann said. “But it can also, in some circumstances, create partisan packing that can make it harder for the state districts as a whole to represent the partisanship of voters who vote.”

Ultimately, the commission will have to evaluate the proposed maps following its own ranked criteria: Districts must follow federal requirements such as population; be contiguous and compact; reflect diversity and communities of interest; don’t provide disproportionate advantage to incumbents or political parties and respect county, city, township lines.

LaBrant, the GOP strategist, said the commission will have to make districts competitive if they want to abide by the criteria of not providing disproportionate advantage to political parties.

“If we want to create 50-50 districts (that is, districts roughly equal in Democrats and Republicans), how are those districts going to look?” asked LaBrant, noting that could result in oddly shaped districts that might not be representative of the communities.

Sandra Chen, a policy and legal researcher at the nonpartisan Princeton Gerrymandering Project, said abiding by a host of federal regulations guiding the process is the main way to ensure fairness.

“Part of assessing whether or not it's fair is checking whether the process is a fair process, meaning, listening to the public, and hopefully those public hearings and taking the testimony into account,” Chen said.