LANSING— The U.S. Department of Justice announced Thursday it will not open a civil rights investigation into Michigan nursing homes or the state’s COVID-19 policies.

The Justice Department now serves President Joe Biden, who along with Whitmer is a Democrat. The decision follows one by Michigan Attorney General Dana Nessel, a fellow Democrat, not to open a probe into deaths.

“With both the United States Department of Justice and Michigan attorney general rejecting these baseless attacks, it's time to end the political games and work together to get things done for Michiganders,” Bobby Leddy, Whitmer’s spokesperson, told Bridge Michigan in an email.

At issue are executive orders issued by Whitmer early in the pandemic that designated certain nursing homes as “regional hubs” to care for recovering patients. She eventually reversed course.

Whitmer’s policies also closed nursing homes to visitors until March to prevent the virus from spreading, but infuriating families.

An administrator for the Facebook page, Caregivers for Compromise, Thompson spent a better part of 2020 trying to see her mother at a nursing home. Norma Thompson, 87, contracted COVID, anyway, though she survived.

Thompson and others worried that residents died of COVID, in part, because outsiders were unable to be physically present to advocate for them.

“Those who died a horrible death alone deserve to be at least honored with an investigation,” Thompson told Bridge Michigan Thursday. “The families are due some answers.”

As of July 13, 5,754 deaths among staff and residents of Michigan long-term care facilities were linked to COVID-19, or about 30 percent of the state’s total deaths, according to state data.

Long-term care facilities include nursing homes, adult foster care homes and homes for the aged. Cases and deaths plummeted in February as residents and staff were vaccinated.

But in a letter to Whitmer’s Chief Legal Counsel Mark Totten Thursday, the DOJ’s special litigation section Chief Steven Rosenbaum said that after reviewing the information provided, the department was not going to open an investigation of any Michigan long-term care facility.

One investigation is still ongoing.

This month, Michigan General Auditor Doug Ringler said he was going to conduct a “comprehensive study of reported and unreported deaths” in nursing home facilities.

House Oversight Committee Rep. Steve Johnson, a Republican who had asked the auditor general to review the death counts, told Bridge Michigan Thursday he is not surprised the “liberal Biden administration” won’t investigate.

“The good thing is that the general auditor and the Republican House are there to make sure that the people of Michigan have a proper accounting of nursing home deaths,” Johnson said.

Anita Haak is another administrator on the Caregivers Facebook page.

Even if an investigation wouldn’t restore those who died, or the time that was lost among loved ones, the past year, Haak said, it might help curb political power during another health emergency.

“In a few years, this could happen again, and then it’s somebody else who is affected,” she said. 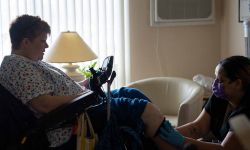 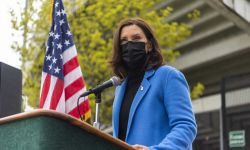