LANSING—Body autonomy. Science that was rushed too quickly. The influence of Big Pharma. Medical tyranny. These were common themes Friday afternoon among a crowd gathered outside the state Capitol to protest mandatory COVID vaccines in Michigan and across the country.

As the work week drew to a close, two hours of speakers generated cheers for God and liberty and jeers against a rising tide of employers, universities and some local governments that are requiring vaccines amid a resurgence in COVID-19 cases this summer.

New York City, for instance, is requiring employees and customers at public gathering places such as restaurants or gyms to be vaccinated or submit to regular COVID testing.

In Michigan, the Whitmer administration has said it has no plans to enact so-called vaccine passports, leaving such decisions to businesses and local school officials, among others.

Some in the Lansing crowd Friday wore scrubs and identified as nurses or other medical professionals, the people most likely to fall under vaccine mandates. Most of the state’s large healthcare systems now mandate vaccines, saying they will help protect patients and hospital staff, with the threat of job loss for those who don’t comply.

Heather Giacona told Bridge Michigan she wants to be clear: She’s not “anti-vax” and neither are many of the health care workers who gathered with her.

“I’m just standing up for my basic right to decide what to do with my own body,” the 39-year-old registered nurse said. 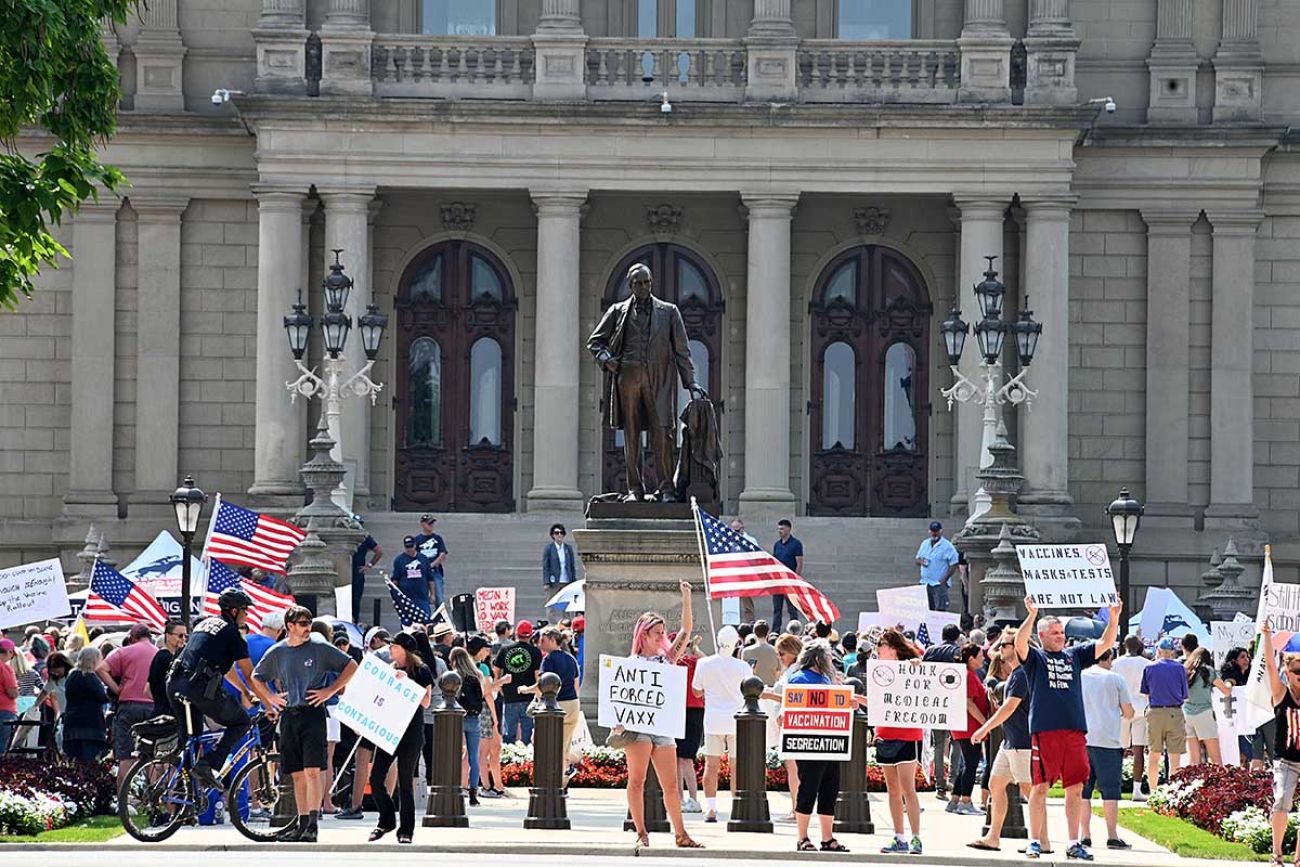 Michigan Republicans increasingly are setting their sights on fighting rules that require vaccinations or masks in public places. (Bridge photo by Dale Young)

Giacona works at several Detroit-area Ascension health locations, and she said she and her colleagues know just how much damage the virus brings. She was infected with COVID, herself, in the early days of the pandemic, she said.

“We can make educated decisions about our own bodies,” Giacon said of Ascension’s mandate that all employees be vaccinated by November.

She said several antibody tests since then have shown she still carries natural protection against the virus, which she said should make vaccines unnecessary in her case.

It’s a common sentiment among those who say they are reluctant to get one of three approved vaccines. But most medical authorities say that vaccines add further protections even for those previously infected. On Friday, for instance, the day of the protests, the Centers for Disease Control and Prevention released a study from Kentucky showing that among people with prior infections, those who were unvaccinated were more than twice as likely to be reinfected as those who were fully vaccinated.

Friday’s protest was organized by Stand Up Michigan, a group that has opposed many of the emergency restrictions issued by Gov. Gretchen Whitmer and other government officials to curb the pandemic.

As COVID cases continue to increase, largely fueled by the Delta variant, hospitals and other employers, government leaders, universities and local school districts are under growing pressure to ensure more people are vaccinated against the deadly virus. That pressure is likely to intensify as cooler fall weather and a new school year drive more people indoors again.

Earlier this week, the CDC raised the perceived level of risk in Michigan, now classifying it as a state with “substantial transmission” based on rising case numbers and test positivity rates.

But many in the crowd Friday said the fight here was about something bigger — a slippery slope toward too much intrusion on personal liberties, whether it comes from Gov. Gretchen Whitmer or happens through an employer.

Tammy Munro, a 47-year-old dental hygienist from Morrice, northeast of Lansing, came to the rally with her two daughters, one a senior in high school and the other in college. Munro’s oldest daughter will be attending her last year at the University of Michigan in Flint, and Munro and her daughter are trying to seek an exemption from the university’s mandatory vaccination requirement this fall.

“I am a vaccine believer, but I also believe you have the right to take a vaccine that you want to put in your body,” Munro said.

“We’re humans of the United States of America, we should have every right to choose that. I am hoping and praying that they hear this and they stop all of this, especially these universities for these poor, innocent young adults. They should not be coerced into taking anything.”

Kevin Bigelow, a carpenter from Linden, southwest of Flint, said he has been to four other protests against mandatory vaccinations. He says he just wishes that his freedom would be honored.

“They need to let the people free like we are supposed to be under the Constitution,” he said.

Despite having contracted COVID, he said he remains skeptical of how COVID is portrayed in the media, and believes it is not as severe as some make it out to be.

“If people were dying like the Black Death, they’d see people laying all over the streets,” he said.

Death data released by the Michigan Department of Health and Human Services, which has linked 19,950 deaths in Michigan to COVID.