‘Good Jobs’ law may depend on the definition of good

LANSING — The success of the “good jobs” tax incentive Gov. Rick Snyder signed into law last week will be measured, in large part, by how much a company ends up paying its employees.

The incentive is designed to reward businesses willing to pay above-average wages as they hire hundreds or thousands of workers.

Yet it’s possible that many new workers might be left out of the higher pay.

What companies will have to pay workers hinges on the definition of “prosperity region average wage.” Snyder administration officials confirmed to Bridge and Crain’s that it’s possible for workers at a company receiving incentives to get paychecks far below the regional level if the company’s overall workforce reaches that average.

So, for instance, in a region where average hourly pay is $25 an hour, a company could be eligible for the incentive by paying its factory workers under $20 an hour, but could still show that its average pay is above the regional threshold by hiring higher-paid executives. 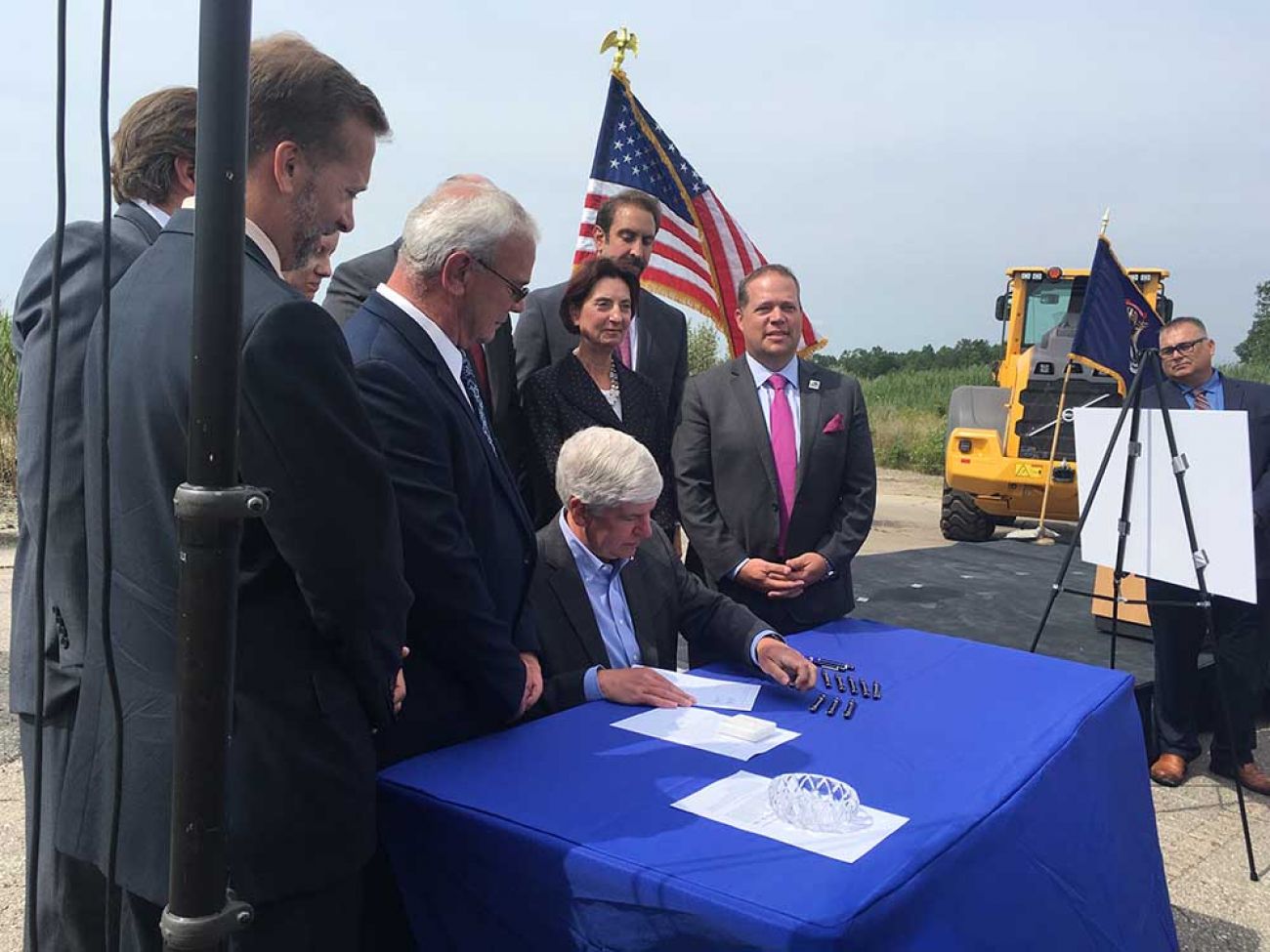 Michigan has 10 so-called prosperity regions carved up across the state, with some having higher-paying jobs than others. To qualify for the tax incentive, a company would have to pay at least the average wage of that region, if not more.

As an example, Metro Detroit — Wayne, Oakland and Macomb counties — has the highest average regional wage at $1,117 per week, or $27.93 per hour, according to the Quarterly Census of Employment and Wages, provided to Bridge and Crain’s by the Michigan Economic Development Corp. The data is current as of the third quarter of 2016.

By contrast, the region covering Northeast Michigan pays its workers far less, an average of $666 a week (Worker benefits would not be included in calculating a company’s wages for incentive purposes, Snyder spokeswoman Anna Heaton said via email. That means an employer couldn’t earn the incentive by counting lucrative compensation packages as wages).

Michigan’s new “Good Jobs” law rewards companies willing to pay workers at or above average wages in their region. But not all Michigan regions are similar; companies in some area pay far less than in others.

The Michigan Economic Development Corp. provided data on the average weekly wage in each of Michigan’s 10 “prosperity regions,” based on the most recent quarterly census data, from the third quarter of 2016. The data is based on surveys and state unemployment insurance data, and includes more than 95 percent of available jobs.

As state officials interpret the “Good Jobs” law, much of the workforce could make below the regional average.

When asked whether that could distort the legislation’s intent of creating high-paying jobs, Heaton said: “If it is a plant, there would be far more manufacturing jobs than engineers or executives, which would weight the average.”

A spokesman for the MEDC, which is crafting guidelines to manage the incentive program, said the agency will not comment on how wages will be determined until after the guidelines are adopted by the Michigan Strategic Fund board.

The three-bill package, dubbed “Good Jobs for Michigan” after a namesake coalition of economic developers and municipal leaders that support it, does not spell out how the wage standard is met. Nor does it specify whether a company seeking incentives under the program would be required to pay every new hire at least the average wage in the region, or whether a company could meet the requirement by average workforce wages — which conceivably could include higher-paid corporate executives to offset lower-paid line workers.

The answer will be interpreted as the incentive is rolled out. But it’s an important distinction to make, both for a company’s bottom line and for the workers these companies are promising to hire.

To qualify for the so-called “Good Jobs” incentive, the law says a company must:

Snyder and state economic development leaders are still trying to woo Taiwanese electronics manufacturer Foxconn Technology Group, which last week said it plans to invest $10 billion to open a factory in southeastern Wisconsin, with plans for at least 3,000 employees and as many as 13,000.

Foxconn reportedly is still considering southeast Michigan, possibly Romulus or Lyon Township, for a reported $4.2 billion investment and as many as 5,000 jobs.

The “good jobs” incentive is intended to strengthen Michigan’s hand.

Lawmakers in the state House created the 3,000-job threshold after the bills cleared the Senate in March. State Rep. Jim Tedder, R-Clarkston and chairman of the House tax policy committee, said the tier was added at Snyder’s request.

“The governor thought it made sense to offer a ‘better’ incentive to attract companies that are willing to invest the capital and resources it would require to bring thousands of well-paying jobs to our state,” Heaton said via email.

Reeling in a big fish

Let’s assume, for a moment, that Foxconn decides to open another U.S. facility in Michigan.

And let’s say Foxconn, which makes liquid-crystal-display screens, decides to employ 3,000 people in Southeast Michigan — which is one way for a company to qualify for the state’s new “good jobs” tax incentive.

And Foxconn decides to pay its employees at least $1,117 per week, or $58,084 per year, which is the current regional average wage in Metro Detroit and the highest in the state.

(Foxconn’s Wisconsin deal lends some credibility to the figure. A fact sheet released by the Wisconsin Economic Development Corp. says the jobs there will pay an average of $53,875. That’s about $25.90 per hour.)

If that’s the case, Foxconn would pay its employees in the Detroit region nearly $28 an hour. That’s about what senior auto workers earned under the Detroit 3’s two-tier pay structure with the United Auto Workers union. Newer hires earned an hourly rate closer to $16.

The median hourly wage for all production occupations in the Detroit metropolitan area was $17.60 as of May 2016, according to federal Bureau of Labor Statistics data.

Snyder and economic development agencies from across the state now agree that Michigan needs more such incentive tools to be able to compete against other states that can offer sweeter deals.

Wisconsin is offering $3 billion in state incentives to the Foxconn project. Some back-of-the-napkin math at Michigan’s 4.25-percent income tax rate suggests Foxconn could receive roughly $74.1 million over 10 years if it created and sustained 3,000 employees for a decade — likely an unrealistic scenario given that production likely would be scaled up over time.

Snyder eliminated most tax incentive programs early in his first term in favor of lower business taxes, but recently has reversed course and supported some incentive programs that come with sunset provisions and limits to how much state money can be given away to companies.

He said he is optimistic that the incentive will produce tangible results that will convince future legislators to revisit a sunset of the “Good Jobs” law in 2019 and possibly raise the program’s cap.

“This is a pilot — a very large pilot when you’re talking $200 million. But our economy’s in a good-enough position where we could go through that fairly quickly,” Snyder told reporters after signing the bills. “Once people see real projects coming to communities, talking about real jobs, I think you’re going to find even more excitement for this.”

Future legislators will have to vote to continue the program after 2019 — one of the key selling points to lawmakers concerned about past incentive programs that ballooned to billions of dollars in obligated state payouts.

State Rep. Martin Howrylak, R-Troy, noted on the House floor before the House vote this month that Seattle-based online retail giant Amazon won more than $12 million in state grants for two fulfillment centers in Livonia and Romulus with existing state incentives. The company plans to create an estimated 2,600 jobs between the two sites.

The state has a cash incentives pool that funded Amazon; supporters of the new withholding credit say the state’s cash doesn’t go far enough to attract the largest projects.

“This bill will handcuff the state of Michigan,” Howrylak said in his floor speech. “I can assure you that many of you who vote for this bill will regret it later. There’s no doubt in my mind.”

Charles Ballard, a Michigan State University economist, said it’s unusual for a company to ramp up from zero to thousands of jobs overnight, though he added that he does not know the particular details of how Foxconn might operate if it brought its business to Michigan.

Even if it does hire 3,000 people in Michigan, Ballard said, with state unemployment low, it’s likely that most of the company’s workers would be moving from another job.

In that case, “you didn’t actually increase employment by 3,000,” Ballard said. “You shuffled employment around.”

Deputy Oakland County Executive Matt Gibb said he envisions the sweet spot for jobs at 1,200 to 1,800 at one clip, projects he said Michigan currently loses to other places.

Gibb said he would consider the incentive a success if Michigan were able to land one to two such projects a year.

If that were to happen by the time the incentive sunsets in 2019, “you’ll have economic developers like myself back in Lansing saying, this is exactly what was planned,” Gibb said, adding: “We’re not talking about a floodgate with these companies.”