Watch Bridge Book Club discussion of ‘The King of Confidence’’

Bridge and nearly 100 readers were joined by author Miles Harvey for the discussion of his nonfiction book.

In the summer of 1843, James Jesse Strang, a charismatic young lawyer and avowed atheist, vanished from a rural town in New York. Months later, he reappeared on the Midwestern frontier and converted to a burgeoning religious movement known as Mormonism.Following the murder of the sect's leader, Joseph Smith, Strang unveiled a letter purportedly from the prophet naming him successor and persuaded hundreds of converts to follow him to Beaver Island in Lake Michigan, where he declared himself a divine king.

“The King of Confidence” tells this fascinating but largely forgotten story. Centering his narrative on Strang's turbulent 12 years in power, Harvey shares the tale of a uniquely American phenomenon: the confidence man.

Harvey discussed his research process for writing “The King of Confidence,” the places where he found his primary sources, comparisons between the time period of the book and today, the role of newspapers and media in Strang’s rise to prominence, the origins of the “confidence man” and the role of this idea in American culture and much more.

Bridge Michigan hosts bimonthly discussions on books with ties to Michigan. Previous sessions have featured "The World According to Fannie Davis," by Bridgett M. Davis, “Arc of Justice,” by Kevin Boyle, “The Women of the Copper Country,” by Mary Doria Russell, “Black Bottom Saints,” by Alice Randall, “Annie’s Ghosts: A Journey into a Family Secret,” by Steve Luxenberg, “The Death and Life of the Great Lakes” by Dan Egan, “Firekeeper’s Daughter” by Angeline Boulley, “Wounds” by Razel Jones and Daniel Abbott, “The Care and Feeding of Ravenously Hungry Girls” by Anissa Gray, “The Other Me” by Sarah Zachrich Jeng, “The Dockporter” by Dave McVeigh and Jim Bolone and “You Cannot Resist Me When My Hair is in Braids” by Frances Kai-Hwa Wang.

Our final book club discussion of 2022 is scheduled for October. Stay tuned to Bridge for an announcement of our next Michigan-related book selection and the date of the next book club meeting.

Nearly 600 Bridge members received a free e-copy of “The King of Confidence” so they could take part in our August book club. If you would like a free e-book of future book club selections, join Bridge Club today. 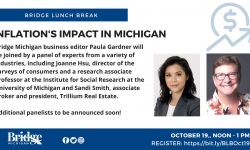 October 6, 2022 | Amber DeLind, Josiah Foster in
The Center for Michigan 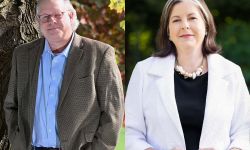 October 4, 2022 | Bridge Staff in
The Center for Michigan