A renter making minimum wage would have to work 77 hours a week — nearly two full-time jobs — to afford a two-bedroom apartment in Michigan.

That's according to a report released this month by the National Low Income Housing Coalition examining the gulf between wages and housing cost among American renters.

Even before the COVID-19 pandemic, there weren't enough affordable homes to meet demand for them in the state. The ensuing economic upheaval only heightened housing instability, pushing lawmakers to dole out billions of dollars in emergency rent aid. But housing experts say that aid is a short-term fix and communities need more affordable housing options, especially as federal protections expire. The Centers for Disease Control and Prevention's moratorium on certain evictions is slated to lift on Saturday.

With no moratorium in place, evictions are expected to increase. An acute lack of affordable housing will make it even tougher for people who are evicted to find a place to live.

"It's a huge challenge just to find housing, no less keep it," said Jim Schaafsma, a housing attorney with the Michigan Poverty Law Program. "That problem is prevalent now and ... as the CDC order goes away, it's only going to make the market and that situation even more chaotic for families, so it'll only worsen an already huge problem."

Gov. Gretchen Whitmer on Tuesday announced a plan to use $100 million in federal COVID-19 relief dollars to create 2,000 new affordable rental homes. The money would go toward providing grants and loans for development, preserving existing housing and security deposit assistance. The City of Detroit is allocating $7 million from federal relief funds to an affordable housing locator. Last fall, the city and partners launched a $48 million fund that would offer developers low-interest loans, private grants and other financial tools to preserve and create affordable housing.

Families at risk of eviction

In Michigan, 73 percent of extremely low income families —  $25,750 for a family of four — spent more than half of their income on housing, according to a National Low Income Housing Coalition analysis. There are 35 affordable and available units per 100 extremely low income households, making it one of 13 states below the national average.

In other words, the state needs roughly 200,000 units for these households. Metro Detroit alone needs 100,000, the coalition estimated.

More than 86,000 people in Michigan between June 23 and July 5 said they're behind on rent or mortgage payments and could face eviction or foreclosure, according to the Census Bureau's Household Pulse Survey.

Before that, more than 100,000 people said they could lose their homes.

Many families will be evicted after the moratorium lifts, Schaafsma said, and that has consequences in a continuing health crisis.

"If families are being displaced and going out into the general community, whether that's to an already overburdened shelter system or doubling up with other families — which is not a permanent solution and poses a public health threat — I think the scenario is, at many levels, alarming," he said.

Rents on the rise

In metro Detroit, the rent price for a new move-in at market rate was $1,108 a month as of June, up 7.4 percent from a year before, according to RealPage, a property management software company.

"The increase in rent shows that there is a lot of demand for apartments in the Detroit metro area. And so, as that demand continues, it's going to hamper affordability," Walter said.

Monica Meldrum counts herself among the lucky ones. She recently secured permanent supportive housing — a new duplex in Eastpointe — through a local nonprofit. Before that, Meldrum lived in a hotel with her son in a program run by the Macomb County Rotating Emergency Shelter Team, or MCREST.

Meldrum, 47, is unable to work because of a number of illnesses that cause pain and swelling. After losing her Section 8 housing last fall, she stayed with friends. She came to MCREST in February. 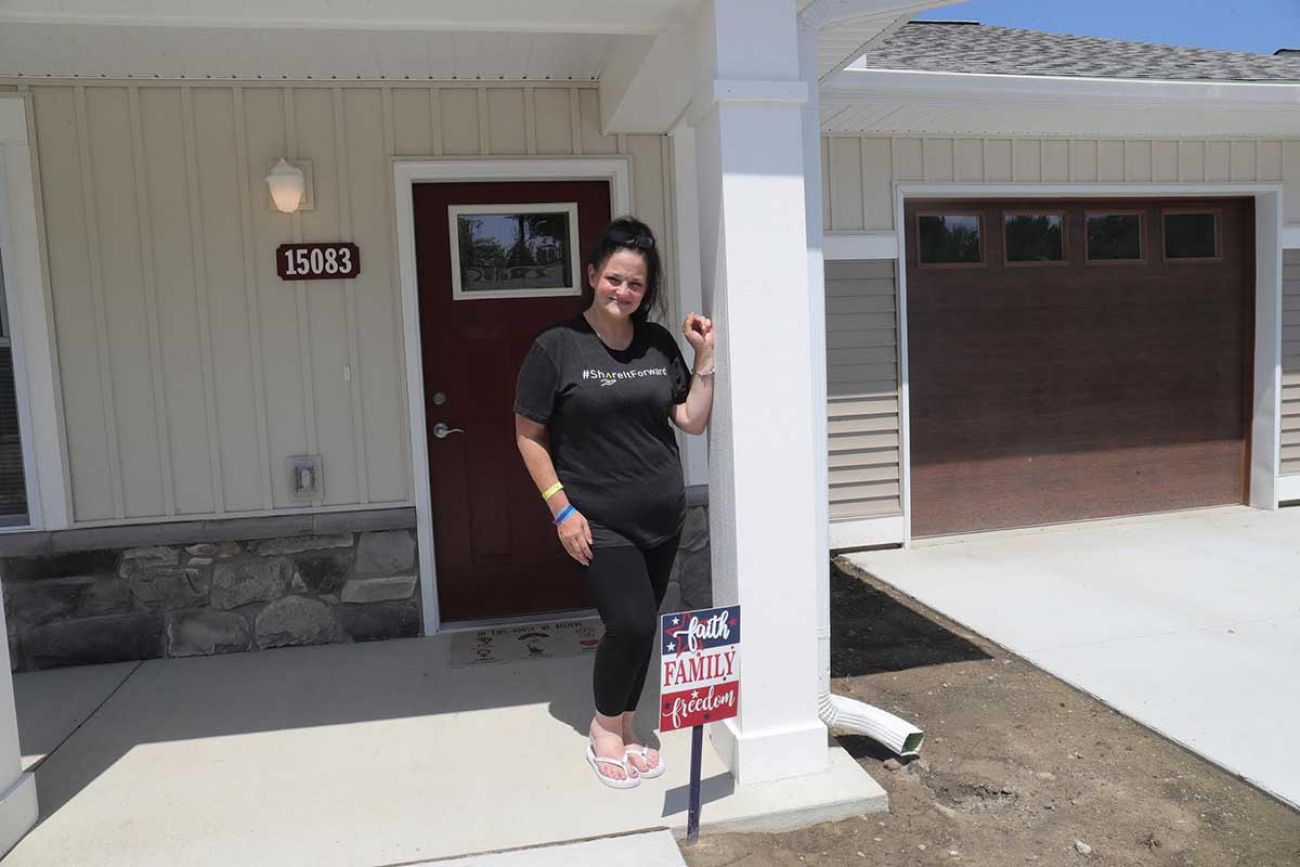 Living in the hotel this year, Meldrum said she was always worried.

"How am I going to make sure that my son has a roof over his head, and make sure that he eats on the same day," she said. "It's just a constant worry."

She spent five months looking for a rental unit.

"It's impossible," she said. "Apartments are full."

But things are looking up for Meldrum. She worked with MCREST to find the apartment. MCREST also paid her security deposit. She pays a fraction of rent and the rest is covered by federal housing assistance. A church group is helping fill her home with rugs, end tables, cleaning supplies, food and clothes.

There are few factors that would make it harder for a person who's evicted to find alternative housing, said Eric Hufnagel, executive director of the Michigan Coalition Against Homelessness: If more people lose their homes, there will be a higher demand for replacement housing; having an eviction record often increases the chances of a prospective landlord to reject applicants; and, if evicted, tenants would be responsible for court costs and any back rent, making it harder to come up with a deposit and first month's rent for a new place.

Stable housing is key to economic well-being, affecting people's ability to afford other basic necessities, such as food and clothing, and their overall health outcomes.

Shortfall between wages and rents

There are no counties in Michigan, for example, where a person earning minimum wage in a full-time position can afford a one- or two-bedroom rental home at fair market rent, according to the National Low Income Housing Coalition's Out of Reach report.

Fair market rents are the median rents for a particular area, calculated by the U.S. Department of Housing and Urban Development.

"Michigan falls somewhere in the middle of all the states if we were just looking at the sheer cost of rent," said Dan Threet, a research analyst at the National Low Income Housing Coalition. "It's important to bear in mind that it's not just the sheer cost of rent that matters, but the shortfall between wages and rents."

In order to afford rent and utilities for a two-bedroom apartment at the fair market rent —without spending more than 30 percent of income — a person working full-time would have to make $18.55, well above the state's $9.65 minimum wage.

"Even before we saw the economic fallout of the pandemic that was disproportionately harmful for low-wage workers generally, many of those workers were already struggling to make ends meet to afford their rent," Threet said.

Beyond temporary measures such as emergency rental aid, policy makers must address the shortage of affordable housing, housing experts say.

"There's a lot of rental assistance money but that's not going to really help in addressing the affordable housing shortage crisis," Schaafsma said.

It's important to look at the "bigger picture," Hufnagel said.

"What are the things that cities can do as incentives to help that development take place? Are there tax breaks that can be given? Is there zoning that would need to be modified in a community," he said. "This is the opportunity for higher level strategic approach that can take place where we can actually be transformative when we think about how we're addressing this issue rather than, quite often, the Band-Aid."

Nushrat Rahman covers issues related to economic mobility for the Detroit Free Press and Bridge Detroit as a corps member with Report for America, an initiative of The GroundTruth Project. Make a tax-deductible contribution to support her work at bit.ly/freepRFA.