If you pay attention to headlines, no doubt you’ve been reading about issues with how Michigan’s Independent Citizens Redistricting Commission has carried out its conversations about our state’s new redistricting map. This is a process that is done every 10 years once the results of the U.S. Census are tallied.

This commentary was submitted by the 16 members of the board of directors of the Michigan Press Association.

This matters because who we can vote for to represent us in Congress, the Michigan Senate and Michigan House is determined by the boundaries, or districts, on this map. When the lines of these districts are changed, it affects which candidates we can vote on and how we are represented for the next decade.

In the past, this process was carried out by state lawmakers, which made it easy for partisan politics to play a significant role.

But in 2018, 61 percent of the voters in Michigan supported a constitutional amendment to take this power out of the hands of politicians and give the job to an independent, 13-member redistricting commission. The ballot proposal was initiated by widespread concerns about the effects of political gerrymandering in Michigan.

On Oct. 27, the commission went into a closed session to discuss documents related to the voting rights laws. It has since been asked to release the documents so that the public could understand what information is playing a role in the commission’s decisions. So far, the commission has refused to do so. The memos were titled "Voting Rights Act” and “The History of Discrimination in the State of Michigan and its Influence on Voting.”

Since that meeting, the commission has posted online and made available draft maps and opened a 45-day public comment period.

As an industry dedicated to providing fact-based reporting so readers can make informed decisions, it seems illogical to us that the public would be asked to comment on something when they are not being provided all the information used to craft the maps.

We commend the efforts of Sen. Ed McBroom (R-Vulcan) and Sen. Jeff Irwin (D-Ann Arbor) for requesting an opinion by Attorney General Dana Nessel on these issues late last month. The Senators stated that ensuring the level of transparency guaranteed by the Constitution is integral to maintaining the public’s confidence in the commission’s work, which of course includes deliberations on the fundamentally important role of the Voting Rights Act in the redistricting process. We couldn’t agree more and we hope that Attorney General Nessel is expediting that opinion.

We urge the citizens of Michigan to call on Michigan’s Independent Citizens Redistricting Commission to immediately release these memos so that voters in Michigan can see all of the information the commission used to craft the maps that we have been invited to weigh in on.

The Michigan Press Association consistently touts the importance of open and transparent government and its significance to the everyday lives of Michigan taxpayers. We feel that complete transparency in this process is vital because the end result of this commission will impact the citizens of our state for years to come. 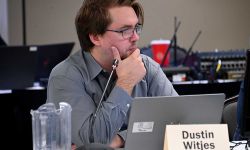