Opinion | You’re paying less taxes than you think. And that’s a problem.

How much federal income taxes do you pay?

The answer is probably less than you think, and that can lead to some bad policy decisions.

We asked Michigan residents how much of their income they think they pay in federal income taxes.  The answers were eye-popping—the vast majority think they pay higher taxes than they actually pay, and some of the overstatements are huge.  As shown in the graph, nearly 8 percent of the respondents to our survey said that they believe their average federal income-tax rate is 50 percent or higher.  More than 2 percent said they think that all of their household income goes to federal income taxes! 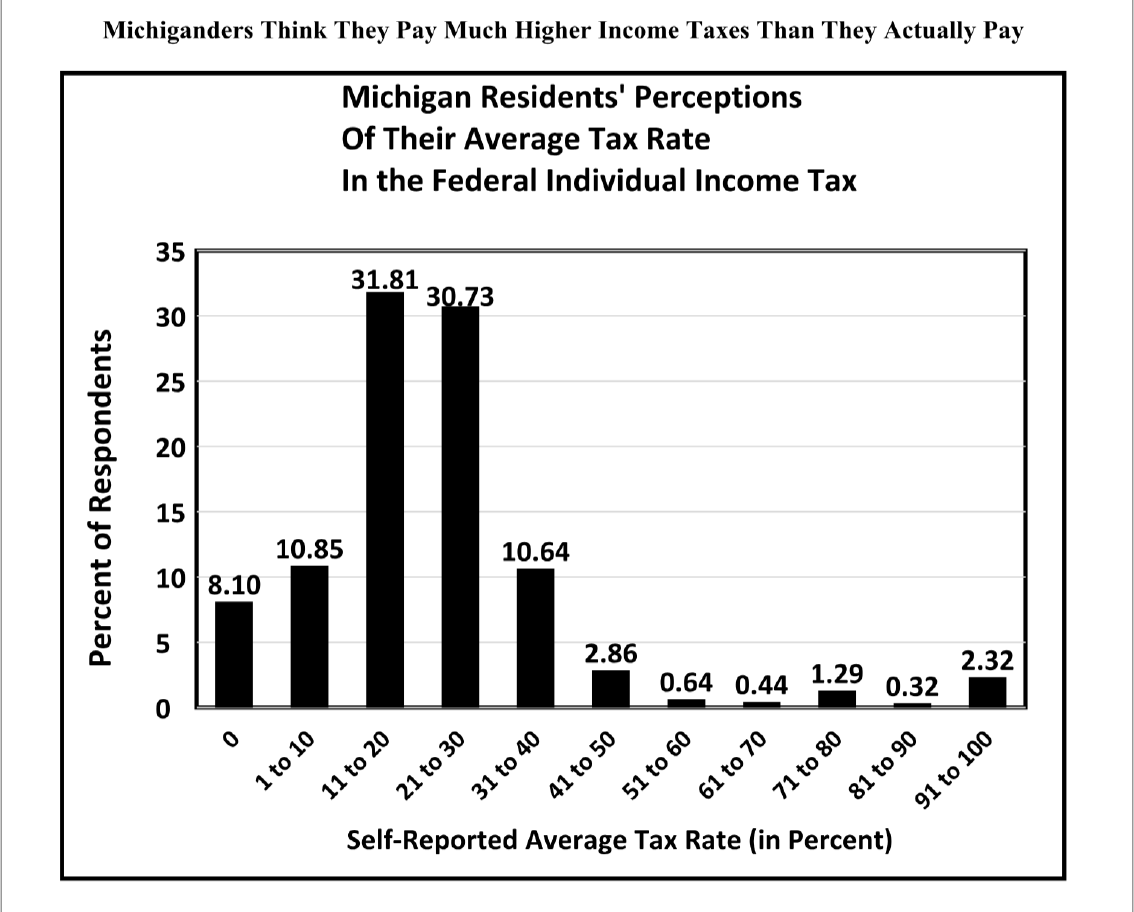 The Institute for Public Policy and Social Research at Michigan State University found that about 85 percent of Michiganders think they pay more in federal income taxes than they actually do.  We estimate that the actual average federal income-tax rate for this sample is about 13.9 percent, whereas they reported in our survey their tax rate to be about 25.5 percent, on average. Thus, on average, the respondents to our survey think they pay almost twice as much as they actually pay.

This is a serious problem.  If people don’t know the basic facts about the tax system, they could easily be misled into supporting policies that are against their interests.  In particular, our results suggest that political support for last year’s tax cuts may have been based partly on inaccurate perceptions of the tax system.

Indeed, we found that those who believe federal income taxes on households like theirs should be lower tend to overstate their income-tax rate by more.  All else equal, a respondent who says the taxes on households like hers should be much lower than they are now would overstate the average income-tax rate by about 10 percentage points more than one who says that such taxes should be much higher than they are now.

You can read our study here.

Those who believe federal tax dollars are spent very ineffectively also tend to overstate their taxes by more, as do those who use tax-preparation assistance.

In research that is similar to ours, Joel Slemrod of the University of Michigan found that about half of Americans believe that most families have to pay the estate tax, whereas only a tiny fraction actually pay any estate tax. Slemrod’s results suggest that misconceptions about the estate tax explain some of the support for eliminating it.

The tax system isn’t the only thing about which the American public is misinformed.  Surveys have found a substantial lack of knowledge of monetary policy, budget deficits, and other important economic phenomena.

Many studies have shown that Americans drastically overstate the size of minority populations.  There is reason to believe that these misperceptions have contributed to today’s widespread xenophobia and anti-immigrant sentiment.

A study by the Kaiser Family Foundation found that the average American believes that 28 percent of the federal budget is spent on foreign aid, whereas the correct figure is about 1 percent!  Thus many people appear to believe that it would be easy to eliminate the federal budget deficit without raising taxes or cutting popular programs like Social Security and Medicare.

This misconception is largely in the lower income brackets, those in higher income brackets generally have a pretty good idea what they're paying. The big problem is FICA! Most folks don't distinguish between income taxes and FICA. Further people think they put a lot more into this program than they take out, while typically they've taken out every nickle they paid in FICA taxes in 6 years! Nor do they consider that their employer has put in a like amount, a direct cost of employing them. All part of the charade that Social security isn't just another welfare program just funded by a tax on employment.

Agreed, Matt. Plus all the other employment taxes paid by employers that the employee doesn't know about. FUTA, Michigan Unemployment and the Obligation Assessment (OA). The OA is used to pay back all the money Granholm borrowed from the Feds to pay out unemployment. That tax started in 2012 and is scheduled to run 7 years but could be longer if the bonds aren't paid back.

There's another misconception that distorts the public policy debate: Michigan state taxes are lower now than when John Engler left office, even after the Snyder tax increases. Ask the average voter and they'd tell you their taxes have been going up and up. It's just the opposite.

In my mind, the largest tax increase in Michiugan's history came under Engler when he jumped us from a 4% sales tax to a 6% sales tax. I don;t disagree with the need the increase and is still lower than most state sales taxes, but don't try to sell anyone that Engler was an anti tax guy! He was a shift the taxes to the middle class guy and give tax cuts to the upper class guy!

You think Federal Income Tax is all that people pay? The liberal socialist from Michigan State is leaving a lot out. State income tax, local income tax, payroll taxes, sales tax, excise tax, road taxes, and a host of taxes disguised as fees. A misleading article.

Misleading perhaps if you only read the title and not like the very first sentence. But if you actually spend the three minutes reading the article....

Note also that in pointing out people pay less federal income tax than they think, and that it's a problem, the authors aren't advocating for higher taxes, but rather highlighting a general lack of information about the public and pointing out that an informed electorate is vital to a functional democracy.

I love Bridge because of your factual reporting and wide range of important topics. However, when it comes to financial understanding and knowledge the general public has on that topic they are seriously misinformed, and yes, that definitely makes those people an easy target for poor legislation.

These guys are exactly right.

The problem is, politicians and the press have it stuck in their head that taxation should be somebody else's problem. The entire system from top to bottom needs a complete overhaul. Flat taxation is not, never has and never will be "regressive". But as soon as everybody pays a fair share and takes ownership of OUR country these idiots lose the power to pander and instead become accountable for their spending, "their" influence regresses.

Public servants? Hardly, pigs at the trough is more like it.

It's easy for a person to be misled about what they are paying in federal income taxes, because of the marginal rate applicable to the upper part of their tax rate. Most people do not blank out the impact of their deductions on their actual final payment. But the more basic point being made is certainly of concern: Distorted perceptions can have pernicious results.

And what about the rest of the story?

Prof. Ballard & Gupta only talk about the FEDERAL INCOME TAX. What is the TOTAL TAX bill that individuals have to pay each and every year (i.e. federal, state, local fees, etc.)?

This is a very old and standard trick used by those who feel that they can spend your money better than you possible can. Break it down into smaller percentages (or in this case focus ONLY on the federal income tax) and then focus only on that, while "ignoring" the rest.

Do you know that you pay more in your total tax bill, than you do for the basics in life?

Oh, and speaking of spreading misinformation...America is not, nor every was, a democracy.

And these two professors get paid over $100K per year for this work! This is nothing but a Deceptive Narrative on Taxes to show that the Tax Cut and Reforms are not creating jobs or will increase Tax Revenue in the long term at the Fed and State Level. Also, people with incomes under ~$40K are paying pretty low Fed Taxes (if any in some cases), but when they consider State Taxes, Auto Fees, Property Taxes, etc.....We are Paying Too Much Taxes. Shame on MSU for this Fake News.

This article is bland and bulky like a high-fiber diet set in type. And misleading like so much of our "news." The article only discusses direct taxes and ignores the taxes/regulations on businesses that are passed on to customers-which is all of us.
If Meijers Thrifty Acres sees a 100,000 dollars increase in one of its taxes, be it property, more costs for income taxes for its employees or costs from increased tariffs it must pass these costs on to its customers, or else it goes bankrupt. That means that if any store sells 10 million objects, each one has to have a cent added to its costs.
This leads to the second principle; that businesses, certain licensed individuals and the wealthy who own and manage businesses, those who set prices, don't pay taxes; a better explanations is that they collect the taxes and pass them on to the government https://www.youtube.com/watch?v=FYc9r8vnunM
And the little guy who must take whatever job he is offered and pay the prices for rent, food, transportation that he finds, pays like a poor dumb beast of burden. This accounts for the increasing gap between the rich and the poor in our country. As the government has increased its size and rapacity, the wealthy, corporations and licensed that are sheltered from the marketplace, pass their increased costs through to the poor people who drown in the increased costs. The poor people are not getting paid less, rather have to pay an inflation that is due directly to our governmental predations.
And that is what our great professors cannot abide; they hide behind the rhetoric of trivial truth but ignore the net cost of government to all people. The ordinary individual had it about right-he does pay 25% of his income but it's in indirect and devastating guise.
This article is trying to bamboozle the poor peons who pay the freight for all that lolly.

What is the "correct" tax rate?