The legal battle between Michigan Attorney General Dana Nessel and Canadian energy giant Enbridge over the Line 5 tunnel agreement may be headed to the Michigan Supreme Court, after Enbridge won the latest round in a dispute over the 2018 law that made way for the tunnel.

In an opinion issued Thursday, a three-judge Michigan Court of Appeals panel agreed with a lower court that the 2018 tunnel law does not violate the Michigan constitution.

Nessel, who campaigned for office on a vow to shut down the controversial dual-span petroleum pipeline across the Straits of Mackinac, argues the law is unconstitutional because the purpose stated in its title does not align with its body text. She had asked the court to agree, and invalidate any actions taken under the law — a move that would essentially cancel plans for the $500 million tunnel project.

In a seven-page opinion released Thursday and written by Judge Thomas Cameron, the panel unanimously rejected that argument.

“We conclude that the title of 2018 PA 359 does not address objects so diverse that they have no necessary connection,” Cameron wrote.

The Republican-backed tunnel agreement, signed in the final days of former Gov. Rick Snyder’s administration, aims to smooth Enbridge’s path to replacing the existing Line 5 pipeline, which sits exposed at the lakebottom in the Straits of Mackinac, with a new segment buried in a concrete tunnel deep beneath the straits.

The tunnel plan was crafted in response to widespread concern that the aging existing pipeline is vulnerable to a catastrophic oil spill. Enbridge contends that burying the pipeline in a tunnel will virtually eliminate the chances of a spill.

But many, including Nessel and Michigan Gov. Gretchen Whitmer, have continued to express concerns about the existing pipeline as well as the tunnel plan.

The lawsuit arose after Nessel issued a March 2019 legal opinion declaring the tunnel law unconstitutional, claiming it violated the so-called “title-object clause” of the Michigan constitution. The clause states that “no law shall embrace more than one subject, which shall be expressed in its title.”

Following Nessel’s opinion, Enbridge sued and won an October 2019 Court of Claims declaration that the tunnel law does not violate the constitution. Nessel appealed, leading to Thursday’s Court of Appeals decision.

In arguments last week before the Court of Appeals panel, Assistant Attorney General Robert Reichel argued the discrepancy between the law’s title and body falls short of the constitutional standard designed to make sure lawmakers and the public know what’s in a bill before it goes to vote. Enbridge lawyer John Bursch, meanwhile, argued high-profile media coverage leading to the law’s 2018 passage made it hard to believe lawmakers weren’t aware of the law’s contents.

In Thursday’s opinion, Cameron wrote that the title-object clause is meant “to prove notice, not restriction.” The act’s title met that bar by signaling that the act would authorize the bridge authority to acquire a bridge and utility tunnel, he wrote. It did not need to further specify details of how that utility tunnel would come to exist.

“Neither the legislators nor the public were deprived of fair notice,” Cameron wrote.

He added that the transfer of responsibility from the bridge authority to the Mackinac Straits Corridor Authority “does not render the subject of the body so diverse from the subject of the title that it does not provide fair notice of its provision.”

Rather, he wrote, the act’s stated purpose of operating a utility tunnel requires some sort of agreement concerning the construction and operation of the tunnel.

In an email to Bridge Thursday, a spokesperson for Nessel said the attorney general intends to ask the Michigan Supreme Court to review the ruling.

“While we are disappointed by the Court of Appeals decision, we stand by our position that Act 359 is unconstitutional,” spokesperson Courtney Covington wrote.

Enbridge spokesman Ryan Duffy said the decision confirms that “Enbridge’s agreements with the State of Michigan are valid and enforceable.”

“We look forward to working with the State to make a safe pipeline even safer,” Duffy wrote.

While Nessel and Enbridge plot next steps in the case, both are awaiting an Ingham County Circuit Court judge’s decision in a separate lawsuit over Line 5. Judge James Jamo heard competing arguments May 22 in a suit Nessel filed seeking to void the 1953 easement that enabled the existing dual-span lakebottom segment of Line 5.

Jamo has offered no timeline for when he’ll rule on the matter. 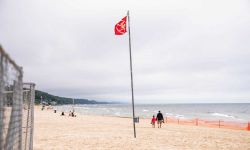 Michiganders to face tickets next spring for swimming in dangerous waves