Community activists have warned for weeks that they intended to sue the state for what they view as a tepid and slow response to the crisis. On Wednesday, they made good on the promise. (Bridge file photo)
November 12, 2021
Kelly House (Email)
Michigan Environment Watch
Michigan Attorney General, Gov. Gretchen Whitmer

Benton Harbor residents are suing the city and state of Michigan, alleging that government leaders violated their constitutional rights with their response to the city’s three-years-long water crisis.

The lawsuit, filed Wednesday in the U.S. District Court for the Western District of Michigan, names a host of state and local officials and alleges that the government left  residents unaware for years that their water could be tainted.

Plaintiffs seek an undisclosed sum of money and remedies including repairs for property damage, replacement of lead water lines, and water delivery, increased testing, a community center for children and adults with learning impairments and a court-appointed monitor tasked with overseeing city water operations.

The suit comes three years into the city’s lead-tainted water crisis, and weeks after a group of activists petitioned federal regulators to step in and provide clean water.

The plaintiffs have asked for class-action status, noting that they filed it on behalf of thousands of Benton Harbor residents.

Lead plaintiffs Doretha Braziel, a lifelong resident of Benton Harbor, alleges she and her children and grandson used the city’s water until October before learning it could be tainted by media coverage of an EPA petition.

This year, water tests showed a lead level of 886 parts per billion in Braziel’s water — 59 times the federal regulatory threshold (though no amount of lead is safe to ingest).

“That’s an absolutely inhumane number,” said Alice Jennings, a lawyer representing plaintiffs in the case. “To allow the community and particularly the children, whose brains are forming, to be exposed to this level: It’s not like what lead can do is a secret. It’s been known for 100 years.”

Lead is a toxic metal that, when ingested, can cause a host of health problems from headaches to permanent neurological damage. It is particularly harmful to children, whose developing brains are more vulnerable.

“Since the first lead exceedance was detected in 2018, the State of Michigan has been on the ground in Benton Harbor working with local partners on a solution to address the aging infrastructure,” Leddy said.

The suit follows weeks of warnings from community activists that a lawsuit is forthcoming because of what they called a slow response to the crisis.

Public records released in response to a Legislative inquiry show that state officials began responding to the crisis immediately after city water sampling revealed elevated levels in some residents’ taps in October 2018.

But the problem festered for years because of miscommunication about the risks, repeated delays and missteps as state and local officials to contain the lead and a lack of funding.

Arguing that residents continue to experience personal injury and property damage, the plaintiffs allege “deliberate misconduct” by state and local officials, including violations of the Safe Drinking Water Act’s requirement to notify the public of lead problems.

Federal regulators this month cited Benton Harbor for a host of problems, including failing to follow through with all public notice requirements triggered by elevated lead levels.

Public records reviewed by Bridge Michigan show that early in the crisis, state officials were concerned about reports that local officials were continuing to tell customers that the city’s water was safe to drink “straight from the tap.”

State and local officials have defended their response to the crisis, noting the city’s financial duress made it hard to make immediate fixes, and that state regulators were more aggressive than the law requires in helping Benton Harbor.

In a letter this week to the state Senate Oversight Committee, Clark wrote state regulators went "beyond legal requirements" to address the Benton Harbor water crisis.

“But given that many residents were not fully reached and engaged by those efforts, we should consider potential improvements to our whole-of-government approach to communications.”

Late Friday, the state Republican Party cited the lawsuit in claiming to slam Whitmer, claiming her "action, or inaction, in Benton Harbor further proves how far removed she is from the issues affecting Michiganders."

"As the state's top elected official, the governor should be held responsible for this public health emergency and her willful neglect of the community," the party's communications manager, Elizabeth Giannone, wrote in a statement. 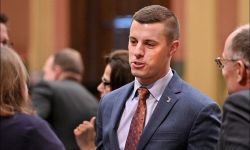