As coasts flood, Michigan towns must choose what to save and what can wait

Michigan Environment Watch
As coasts flood, Michigan towns must choose what to save and what can wait

To understand how waterlogged South Haven has become, look no further than Dunkley Avenue, where a man was spotted fishing for carp in the middle of the street this spring.

Dunkley “has been underwater for the better part of a year,” noted City Manager Brian Dissette, the result of record-high water levels in Lake Michigan that have backed up into the Black River that flows through his 4,300-person community.

And although the city council has approved a temporary fix involving sand bags and water-filled barriers, it may be quite some time before money frees up for a permanent solution. Addressing all of the city’s high water challenges would gobble up half of the city’s $40 million annual budget, Dissette said, so “our focus right now is on critical infrastructure.”

That would include lake waters advancing on South Haven’s wastewater treatment plant, which could send raw sewage into the river and Lake Michigan. City marina docks also are underwater, and officials worry that current from their electrical systems is leaching into the water.

By comparison, the city’s carp-filled street is a minor problem.

In coastal communities around the state, the mounting cost to repair or relocate threatened public infrastructure has collided with fiscal belt-tightening tied to COVID-19. An economic downturn caused by the pandemic has punched a $6.2 billion hole in Michigan’s budget and done extensive damage to federal and local budgets, leaving less available to respond to high lake levels.

“We’re just doing our best to accept the new reality,” said Dissette, which means that money to pay for infrastructure damage is growing scarcer by the day.

Local government leaders up and down Michigan’s coastlines are in triage mode as they grapple with the layered crises of high water and COVID-19 budget cuts, said Herasanna Richards, who represents their interests as legislative associate with the Michigan Municipal League.

After hearing from some lawmakers that high waters and coastal erosion were problems only for rich homeowners who had built expensive vacation homes too close to the shore, Richards created a spreadsheet to track the toll that water is taking on public infrastructure, from roads and bridges to drinking water wells and marinas.

Thirty-two coastal communities scattered along both Michigan peninsulas have itemized their costs, with a current tally of more than $68 million. The figure keeps growing as communities continue to assess damages and waters continue to rise. 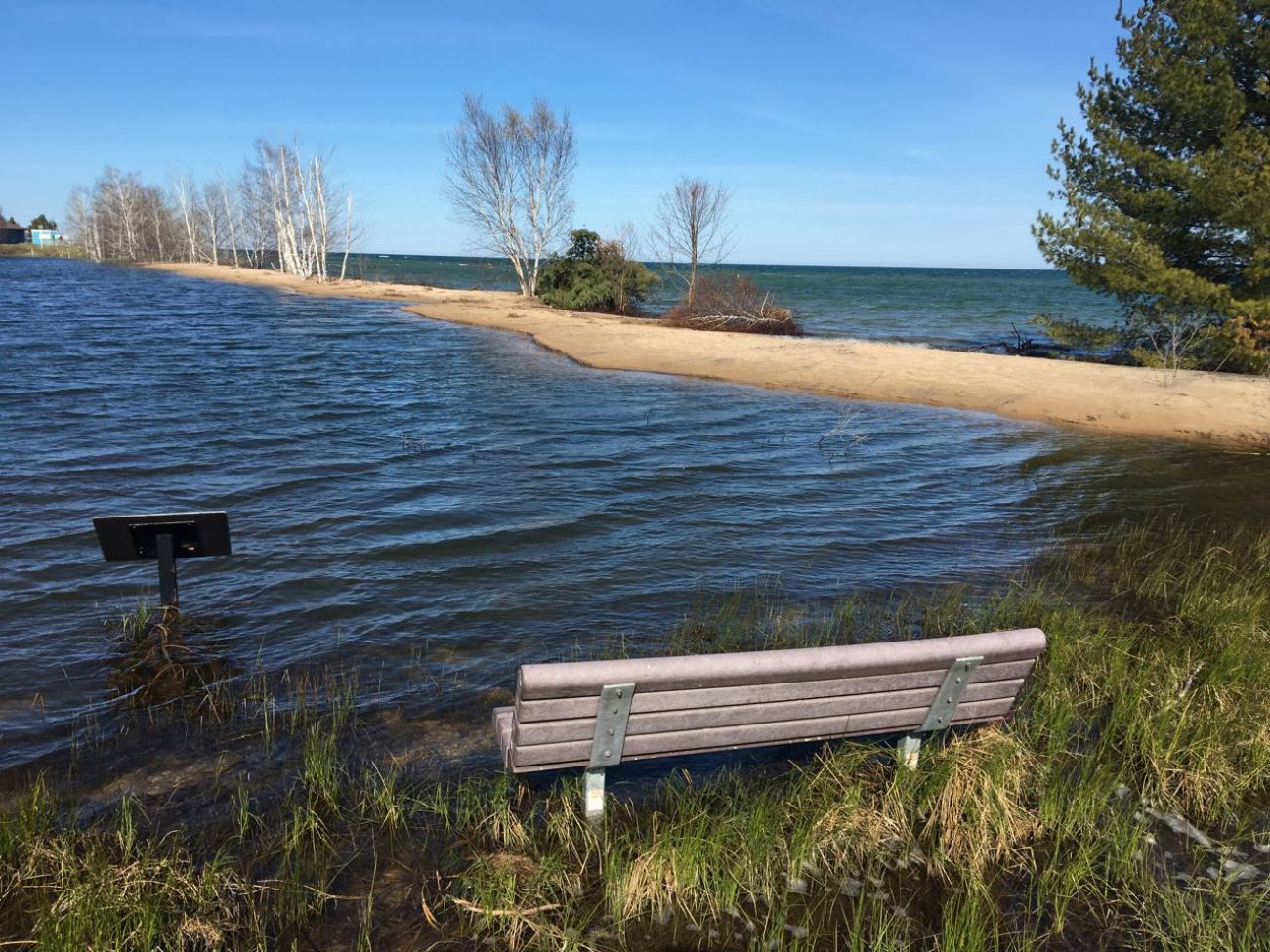 The U.S. Army Corps of Engineers, which tracks Great Lakes water levels, announced last week that lakes Michigan, Huron, St. Clair and Erie all set new monthly mean water level records in May. Lakes Michigan and Huron will continue to rise through July on track to surpass an all-time high set in 1986.

After that, water levels will decline during the winter months, but remain well above historical averages. That means the toll of damaged and destroyed public infrastructure and private property will keep growing.

With fewer dollars coming in from sales tax, income tax and business taxes, Michigan’s state government faces a $3.2 billion shortfall for the current year, along with $3 billion less than expected to craft a new budget for the new fiscal year that begins Oct. 1. 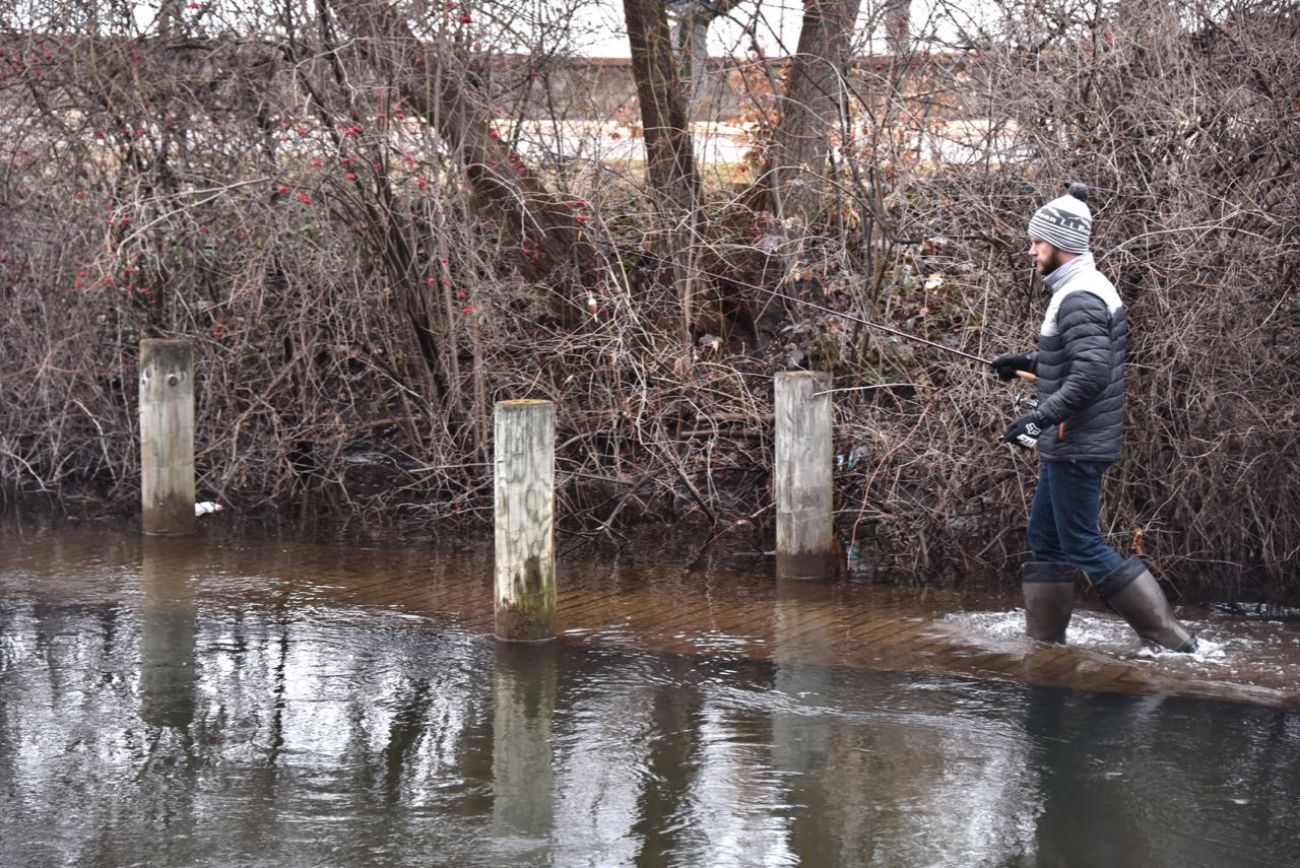 Officials could tap into the state’s $1.2 billion “rainy day” fund to cover some of the shortfall, and Gov. Gretchen Whitmer has urged the Trump administration to allow Michigan to use $3 billion in federal pandemic aid to backfill budget shortfalls. But neither of those options are sure bets. And even accounting for both, the state would still be $2 billion short.

State budget office spokesman Kurt Weiss told Bridge that without an injection of new federal aid, deep cuts will happen across the government.

Because local governments are entitled to a portion of the state sales tax in a process called revenue sharing, state reductions will also directly affect local budgets. Meanwhile, property taxes and other sources of local revenue are expected to decline.

And because many coastal economies rely upon tourism that has subsided amid the pandemic, local government leaders in lakeshore towns expect to lose out on revenue they had expected to collect from parking fees, marina boat slip rentals and more. 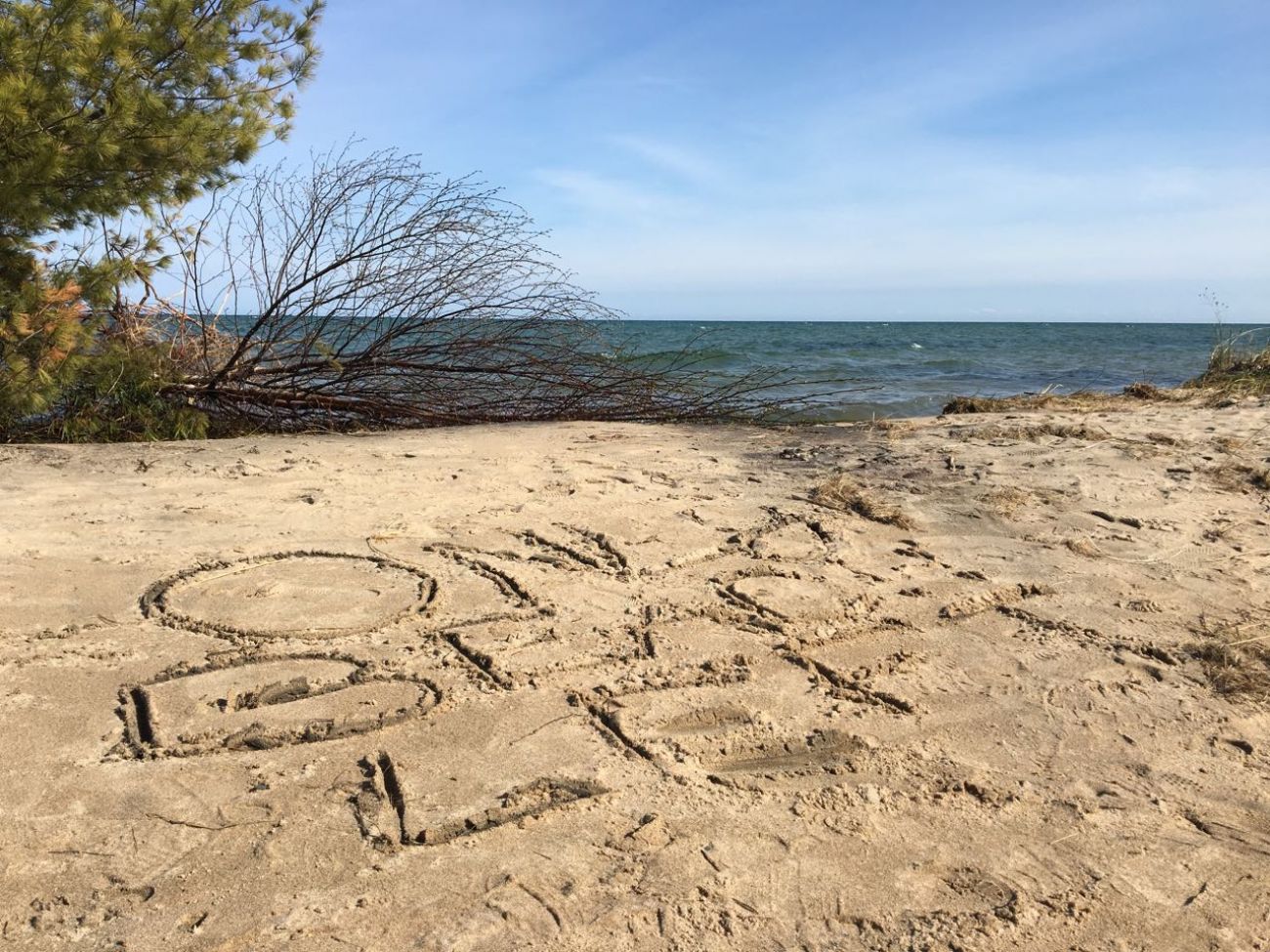 And because many coastal economies rely upon tourism that has subsided amid the pandemic, local government leaders in lakeshore towns expect to lose out on revenue they had expected to collect from parking fees, marina boat slip rentals and more.

“The cost that they’re facing is unfathomable, and they don’t know where they’re going to come up with the money to cover it,” said Rep. Sue Allor, R-Wolverine, whose district includes five counties along the Lake Huron shore.

Whitmer and the Republican-led Michigan Legislature had agreed to include $5 million in a March supplemental budget bill to help communities repair infrastructure damaged by high water, but the governor vetoed the spending when the pandemic hit, acknowledging “the world has changed since those negotiations” and the money should be saved to confront a coming budget shortfall.

Local public officials in coastal towns are bracing for next year’s state aid to dry up, too.

Whitmer’s proposed 2021 budget, which she unveiled in February, included $40 million for grants to help local governments address climate change-related issues including high water.  But given the budget shortfalls, Richards said, “we are going to assume it’s probably going to be less.”

The prospect of federal relief is equally uncertain. 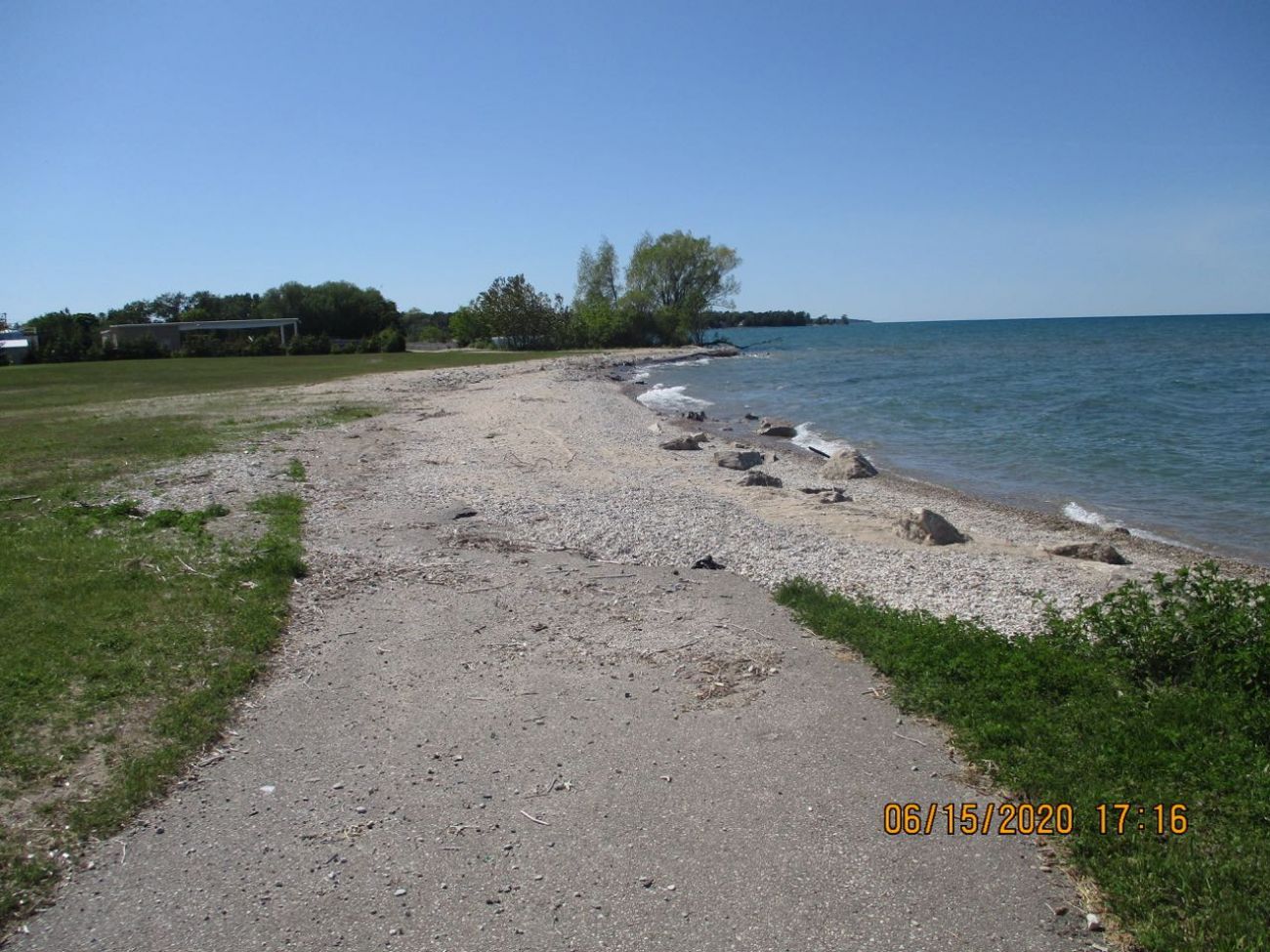 The bill hasn’t budged since.

Congress is focused on responding to the pandemic and nationwide protests against police brutality and racism, so “it’s hard to predict” when the bill might get onto the Senate floor for a vote, Peters told Bridge in an interview.

With local, state and federal funding uncertain, Richards said the Michigan Municipal League is encouraging its members to pursue other sources of money, such as grants that municipalities typically wouldn’t seek.

Given the dire budgetary circumstances, many communities are resorting to short-term solutions to stave off the waters, while they cross their fingers for an unlikely economic turnaround to free up money for more expensive permanent fixes.

In South Haven, local officials have turned to the U.S. Army Corps of Engineers for assistance.

The Corps’ Detroit district provided city officials with sand-filled barriers to protect its water treatment plants from the rising waters. But the fix is only temporary, and Jeff Yoakam, an emergency management specialist in the Corps’ Detroit office, said South Haven will have to repay the agency for materials costs.

Other communities have also turned to the Corps for help until they can fund permanent solutions to flood control problems. So far, Yoakam said, the Corps has provided technical advice to 13 Michigan counties and the Sault Ste. Marie Tribe of Chippewa Indians, and direct assistance such as materials and supplies to four counties. The agency has also supplied 350,000 sandbags to local governments throughout the state.

In Rogers City, along Lake Huron in the far Northeastern Lower Peninsula, local officials are working with a consulting firm to identify options for a wastewater treatment plant that is at risk of flooding and a city drinking water well that is 10 feet shy of being swallowed by Lake Huron. City Manager Joe Hefele has been telling anyone who will listen that these problems should be important to all Michiganders, regardless of whether they live near the beach.

“Lakefront cities up and down the state are an enormous part of what makes Michigan ‘Pure Michigan,’” Hefele said. “If these cities are unable to address these problems, that all goes up in smoke.”

In Pentwater, along the central Lake Michigan coast, Village Manager Chris Brown feels fortunate that his community isn’t facing imminent dangers like those faced by Rogers City and South Haven. But a downtown street is flooded. And the municipal marina won’t open this year because half of it is submerged and the other half has no electricity.

Pentwater was awarded a state grant to upgrade the marina’s electrical system, and work crews had just torn out the old system when Michigan logged its first coronavirus case. The grant is now on hold amid state budget cuts.

“We don’t want to paint pictures of doom and gloom because we’re an upbeat community and trying to smile despite all these things,” Brown said. “But it’s getting difficult.”