LANSING – Orphan oil wells plague the Midwest, but new funds from the federal government will help plug them.

There are tens of thousands of orphaned or abandoned wells throughout the Great Lakes region, including roughly 450 throughout Michigan’s Lower Peninsula. There are large concentrations of the wells in Manistee and Benzie counties, and along the border of Charlevoix and Otsego counties, according to the state Department of Environment, Great Lakes and Energy.

Elsewhere in the Great Lakes region, the Ohio Department of Natural Resources has identified close to 19,000 orphan wells and Pennsylvania has over 7,000, according to its Department of Environmental Protection. 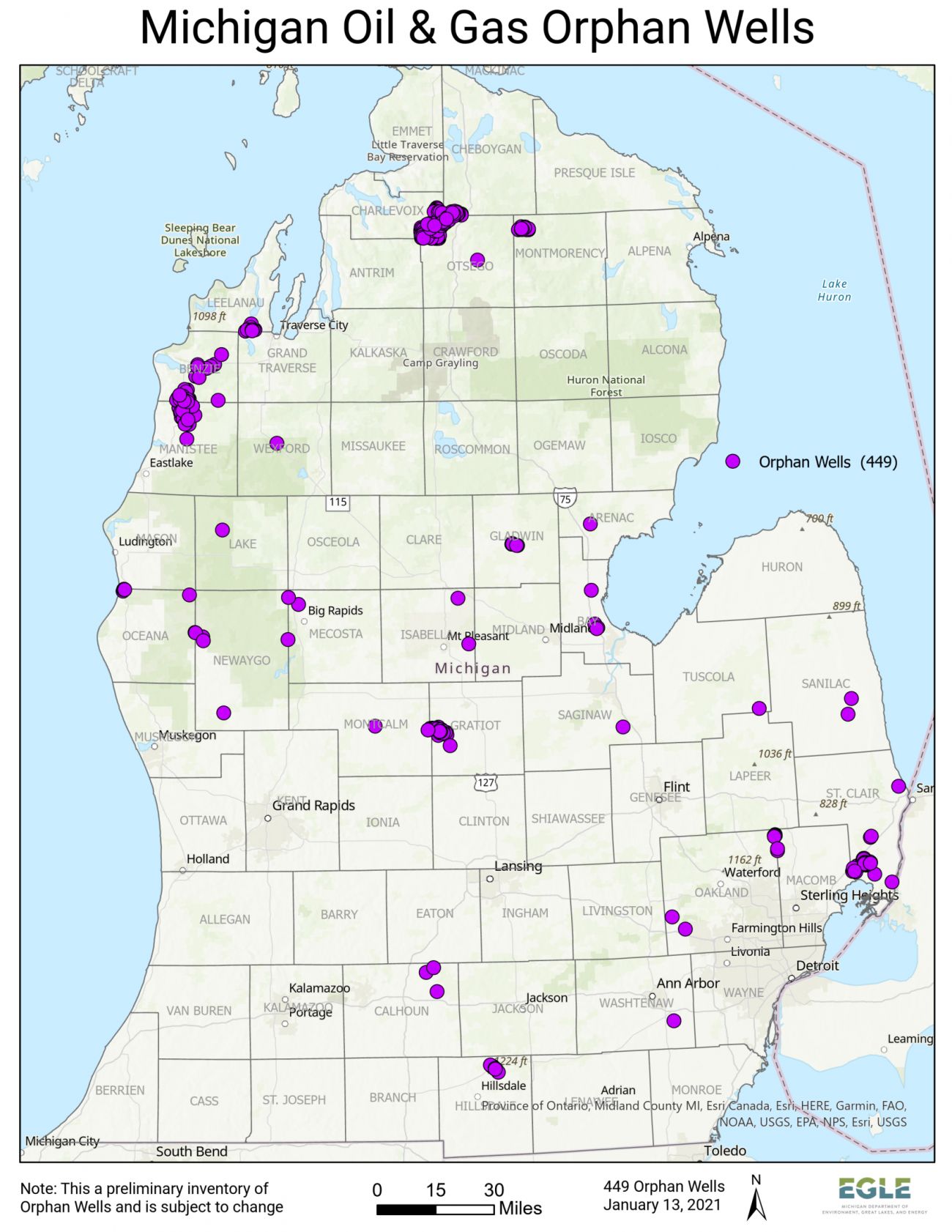 Michigan, Ohio and Pennsylvania have each received a $25 million grant from the federal government through the Infrastructure Investment and Jobs Act to plug orphan wells, which are abandoned or improperly plugged wells that have no solvent existing owner or operator.

Such wells can have a variety of negative effects on the environment around them, according to the National Energy Technology Laboratory.

Orphan wells can contaminate groundwater through the leakage of chemicals like hydrogen sulfide and arsenic, both of which are harmful to humans, according to the lab, which is part of the U.S. Department of Energy.

"We need to use every available resource to protect drinking water for Michiganders," Michigan Gov. Gretchen Whitmer said at the time the federal grant was announced last year. "This funding will help us plug orphan oil and gas wells, which will prevent the emission of harmful gasses, create jobs, ensure that more sites are made available for productive use by businesses and property owners, and protect the water supply for families."

The federal grants are the first round of funds through the program.

Pennsylvania will receive an estimated $300 million-plus and Ohio will get about $250 million over the next five years, according to the U.S. Department of Interior.

Before the influx of federal funds, money set aside to plug orphan wells came from state budgets.

Capping a well in Michigan costs around $76,000 on average.

However, emergency cases can run closer to $350,000, said Adam Wygant, the director of the state department’s Oil, Gas and Minerals Division.

The division works with property owners to get their consent to work on their property and manage expectations about the restoration of the land around an orphan oil, Wygant said.

“The agency then works hand in hand with the contractor, overseeing the work that is performed and making decisions as the project goes on,” Wygant said.

If the process goes smoothly, it takes about two weeks to plug a well. For more complicated wells, it can take up to two months

Generally, abandoned wells are discovered by landowners exploring their property or noticing side effects of a leaking well. The state can also inherit wells if a company owning them becomes insolvent, Wygant said.

Occasionally, the Oil, Gas and Minerals Division investigates an area to locate an orphaned or improperly sealed wells.

The division sets priorities for closure based on a well’s potential environmental impact and recently added an environmental justice category to its priority scoring system, Wygant said.

The division wants to allocate 90 percent of the funds it received from the federal government before the end of the year, Wygant said.