Kelly Straka, DNR Wildlife Health Section supervisor, shown leading a 2017 meeting with deer hunters and landowners in Greenville. She told Bridge in March she had no idea how state lab workers contracted bovine TB, saying, “There wasn’t anyone who did anything wrong.” (Bridge photo by John Barnes)

Ill-fitting respirators. Deer dissected in rooms with few safeguards. Fourteen-hour lab shifts. And so many severed deer heads they were a trip hazard.

These were among the working conditions suspected in an unprecedented bovine tuberculosis outbreak that struck five technicians in Michigan’s Wildlife Disease Laboratory last year, Bridge Magazine has learned.

Now, state investigators are looking into whether those conditions violated worker safety regulations.

MiOSHA spokeswoman Camara Lewis said a doctor contacted the agency about lab conditions on March 9, three days after Bridge reported that half of the state’s 10 lab workers tested positive last year for the bacteria that causes lung disease.

“The referral was from a physician, however, the media reports were also factored into the decision to conduct the enforcement investigation,” Lewis said.

The Wildlife Disease Laboratory in Lansing is part of the Michigan Department of Natural Resources, and is responsible for monitoring the health of state wildlife. In recent years, DNR was highly concerned about bovine tuberculosis as well as chronic wasting disease in Michigan deer herds.

It’s the reason hunters are asked, and sometimes required, to submit deer heads at DNR stations or in deer head drop boxes for lab testing. 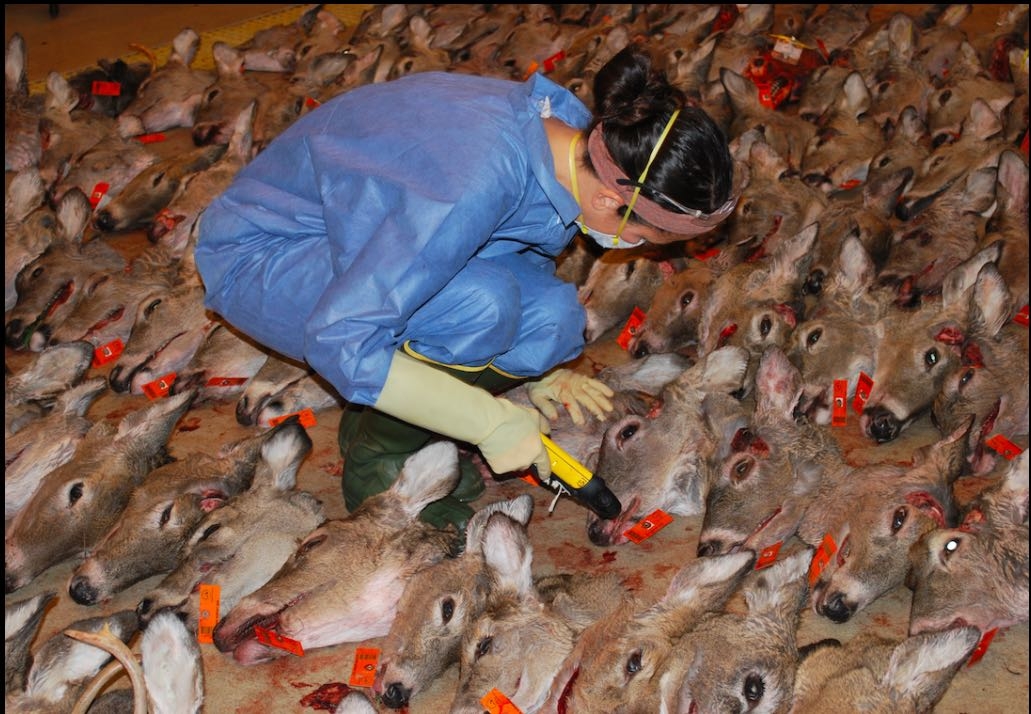 State safety regulators said a lack of storage led to deer specimens being arrayed on the floor of Michigan’s Wildlife Disease Laboratory, possibly elevating the risk of airborne TB exposure from deer to lab technicians. (Courtesy photo by Anna Mitterling)

State health regulators suggest in an internal memo obtained by Bridge that lab workers were overwhelmed by the volume of dead deer submitted for testing.  Necropsies were performed in rooms in the lab without enough circulating air and without required biosafety cabinets, according to the Michigan Department of Health and Human Services memo.

Lab workers were trimming and sectioning deer in “areas with lower rates of air exchange (which) may result in increased risk of occupational exposure,” wrote TB program manager Peter Davidson.

Davidson also cited a “dramatic increase in the volume of deer heads and carcasses submitted for testing in recent seasons” as potential problems for lab workers.

“It is beyond our expertise or scope to evaluate the individual or cumulative contributions these risks may have made toward the recent TB” outbreak in lab staff, Davidson wrote, suggesting DNR seek guidance from MiOSHA.

The wildlife lab, in Lansing just south of the Michigan State University campus, was designed to check up to 20,000 deer heads for disease in a hunting season. During the 2018-19 hunting season, the lab necropsied more than 35,000 deer heads, records show. 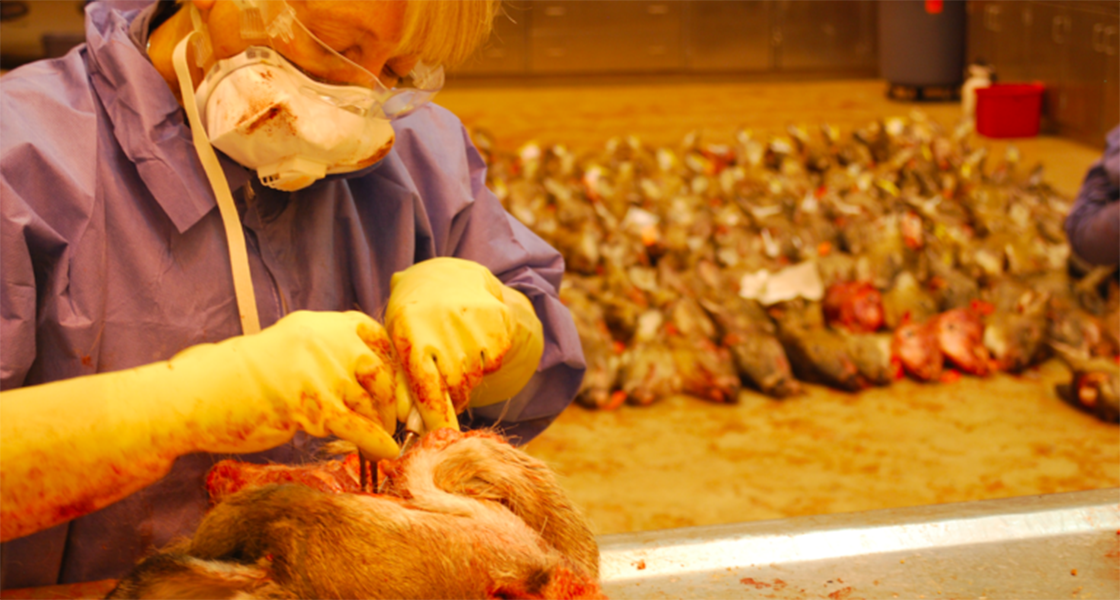 DNR spokesman Ed Golder told Bridge last month that the TB outbreak among lab workers prompted the agency to scale back deer testing and the number of hours worked by lab technicians. He also said DNR officials “don’t know how the employees were infected” and that reviews by other agencies “weren’t able to draw any definitive conclusions about the cause of the infections.”

Neither Golder nor Straka mentioned the MDHHS memo, which listed several potential hazards that may have contributed to workers being infected. The memo, sent last July 24, was addressed directly to Straka.

As Bridge reported in March, a latent form of TB was discovered among three laboratory employees during annual DNR tests last June, internal emails obtained through a public records request showed. Two more technicians were identified in August after the DNR offered testing to hundreds of wildlife staffers and lab volunteers following the earlier test results.

The inactive form of TB is not infectious unless it activates, as 10 percent will if untreated.  All five lab workers underwent months of antibiotics, the DNR said.

The state did not publicly disclose the illnesses before Bridge broke news of the outbreak in March. Golder had said no announcement was necessary because the cases did not pose “a broader public health concern.”

Lab workers likely contracted bovine TB from among 26 positive specimens, the DNR has said. All samples were taken from the northeastern Lower Peninsula, where the rare strain persists among deer and cattle. Before the five cases were identified last summer, just three people were known to be infected by Michigan’s deer/cattle strain.

Hundreds of other Wildlife Division workers and volunteers were offered cautionary tests, internal state emails show. A student technician was among those infected, a union representative told Bridge. 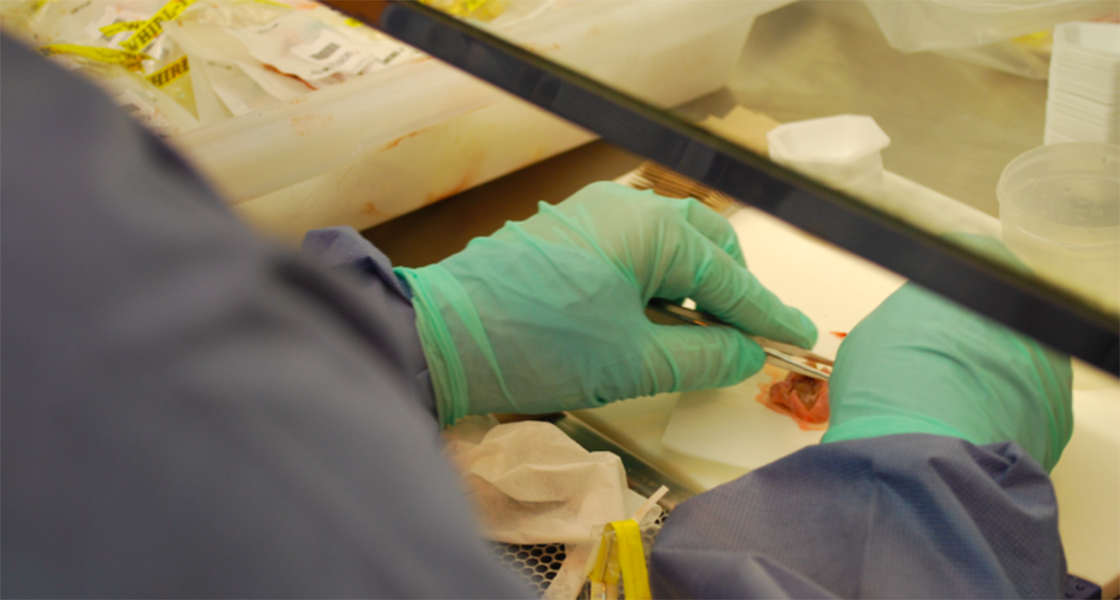 Dissecting deer lymph nodes for testing was performed without biosafety cabinets, such as the one used in this photo, state safety regulators determined. (Courtesy photo by Anna Mitterling)

“She was a wreck … nervous as heck,” said Kevin Karpinsky, senior labor relations specialist with Service Employees International Union 517M. The student had returned to her home and was nearly overlooked for testing, he added.

“Basically that whole season was horrible, a perfect storm of things occurring that were out of the control of the individual,” Karpinsky said. He said after the TB outbreak, the union had considered a walkout to shut down the lab.

There were, to be sure, good reasons for DNR concern about deer health.

Chronic wasting disease, which is fatal, had been discovered in a strange-acting, emaciated deer in a Lansing suburb in 2015. With containment considered critical, wildlife managers boosted testing to get a grip on the spread of the infectious brain disease. It has now been found in eight west-central Lower Peninsula counties and the U.P.’s Dickinson County.

Bovine TB, common before dairy products were pasteurized more than a century ago, is now rarely found in people in the U.S. The few known animal-to-human transmissions involved airborne and direct contact with infected animals, such as a hunter with a cut finger field dressing an infected deer.

To help prevent such incidents, state and federal regulations require lab workers to be securely protected from infectious agents.

Technicians must use biosafety cabinets — sealed, filtered enclosures to contain infectious, microscopic droplets. And labs must be appropriately ventilated with sophisticated air-handling systems.

A team from the Michigan Department of Health and Human Services — Dr. Kim Signs and Davidson, the TB program manager — inspected the lab at the DNR’s request last summer on July 3, after the first three human TB infections were confirmed.

Davidson’s memo, which he wrote after that visit, cited several problems that might have allowed airborne microbes to travel from infected deer to lab workers.

A grueling pace. “Staff typically worked 10 to 11-hour shifts, and often up to 14 hours,” Davidson wrote. Combined with the excessive volume of specimens, “such excess … could result in an increased risk of occupational exposure.”

Workplace limitations. “Trimming and sectioning of lymph nodes (to test the deer for disease) took place in annex rooms with lower rates of air exchange and outside of biosafety cabinets.”

The DNR cut back the deer testing program this past hunting season to levels closer to 2017. Some 700 hours of overtime were slashed by nearly two thirds, payroll records requested by Bridge show.

By state law, employers must report occupational diseases to MiOSHA.

Under MiOSHA’s current inquiry, penalties are possible if rules were broken and the state is found culpable. Respirator protocols alone span 32 pages. The probe could take “weeks or months,” Lewis said.

DNR met again with MiOSHA in February along with an MDHHS representative and planned further consultation, but the information was “kept separate” from MiOSHA investigators, Lewis told Bridge in an email.

“This is standard practice across the nation, and this allows MIOSHA and other states to provide consultative services in a confidential manner in order to encourage use of the services by employers,” she said.

“Review donning procedures to ensure employees tight-fitting respirators (e.g. N-95) are properly fitted/sealed to the face every time they are placed on the face,” industrial hygienist Jenelle Thelen wrote in an Aug. 9 email to Straka, the wildlife lab supervisor.

Lab photos posted online a year earlier show a worker removing lymph nodes wearing what appears to be a blood-stained, loose-fitting respirator mask. The photos were taken by lab volunteer Anna Mitterling, then of the Michigan United Conservation Clubs.

Karpinski, the lab workers’ union representative, said he blamed a contractor for inadequately fitting and training lab staff. “They weren’t treating it seriously and weren’t very good at it,” he said.

Karpinski said the union was ready to confront DNR about safety conditions at the wildlife lab at a Dec. 3 labor-management meeting. “We were thinking about a complete shutdown of the lab,” he said.

He credited DNR Director Dan Eichinger, then in his first year, for setting a cooperative tone during the meeting, something he said was missing in the past. “I was very impressed. I didn’t even have to pull [the ultimatum] out of my pocket.”

The possibility that wildlife lab workers could contract bovine TB from infected animals was highlighted in a recent federal effort to raise awareness about the danger based on a new study.

The U.S. Centers for Disease Control and Prevention in September issued a public service announcement warning hunters to use personal protective equipment while field-dressing deer.

Genetic analysis had proven a deer in the epicenter of Michigan’s bovine TB area — in Montmorency, Alpena, Oscoda and Alcona counties — had infected a 77-year-old hunter whose lungs failed years later.

Two older cases of deer-to-hunter transmission in the area were also confirmed, the CDC reported. All three patients were matched to the strain circulating in northeast Michigan.

No, bridge. The investigation was started because the workers contacted TB. You aren't special - You are fake news.
Working around animals who can carry TB is a known risk factor for contracting TB, and a certain percentage of workers will always take the risk regardless of whether PPE is present or not. The outcome of this investigation is quite predictable.

“Fake News” seems to be the new generic insult to use against any media outlet or journalist with whom the accuser disagrees or harbors some dislike. It is not a very specific or creative insult when the President uses it, and in this case it is not accurate. Even if Bridge didn’t initiate the investigation into the DNR employees getting TB, Bridge did report on the infections. That is news and certainly not “fake.”

Chronic wasting disease, which is fatal, had been discovered in a strange-acting, emaciated deer in a Lansing suburb in 2015. With containment considered critical, wildlife managers boosted testing to get a grip on the spread of the infectious brain disease. It has now been found in eight west-central Lower Peninsula counties and the U.P.’s Dickinson County.

Going forward the truest act of bravery may be to continue eating meat?

I have found the Bridge to be the most dependable unbiased source of information during this mess called COVID-19. If reporting in the fashion and manner they do causes some to question it, I would say please do a analysis of the information from other sources before forming an opinion.