In Northern Michigan, bison are teaching a lesson in sustainability

Michigan Environment Watch
In Northern Michigan, bison are teaching a lesson in sustainability

On the drive up US-31 into Traverse City, Michigan, people expect to see strip malls and a view of Grand Traverse Bay once they crest a big hill.

But they don’t expect a field full of bison.

These animals have been a fixture of the area for nearly 60 years. The herd is owned by Oleson’s Markets, a local grocery store chain where bison meat is a centerpiece item.

The Oleson’s bison are not alone. Other family operations are popping up, re-establishing an ecological tradition from when the animals were found as far east as New York and the Carolinas.

I wanted to find out what farming bison in Northern Michigan actually looks like. Luckily, I happen to know a farmer.

David Kirby is my now-retired high school physics teacher. He’s been maintaining a herd of bison near Lake Leelanau for about eight years now.

Kirb, as we called him in school, began farming bison as a passion project on century-old farmland in his neighborhood. He and his wife bought it to keep a subdivision from going in near their home.

Now, he maintains a herd of 16 bison, with new calves each year and three animals slaughtered in the fall.

“We call it graduation,” he said as the bison lumbered over to greet him at the fence. “They’re about to graduate from our program.”

For Kirb, farming bison is a way of returning the land to a semblance of its historical state.

“It’s what I imagine this country looked like before it was even a country,” he said. “Before Europeans got here and started turning over the soil and chopping trees and massacring bison. You know, before that, this is what there was. And it just really anchors my soul.”

When he started, he had no previous experience with farming. But now, Kirb and his family have caught on to caring for their bison, in no small part because the animals are highly self-sufficient.

“They don’t need help getting pregnant, they don’t need help giving birth,” he said. “They are perfectly comfortable in the high heat of the summer and the howling winds. This ridge just howls with cold winds, and to them it just looks like they’re standing in a field of daisies. It really doesn’t bother them.” 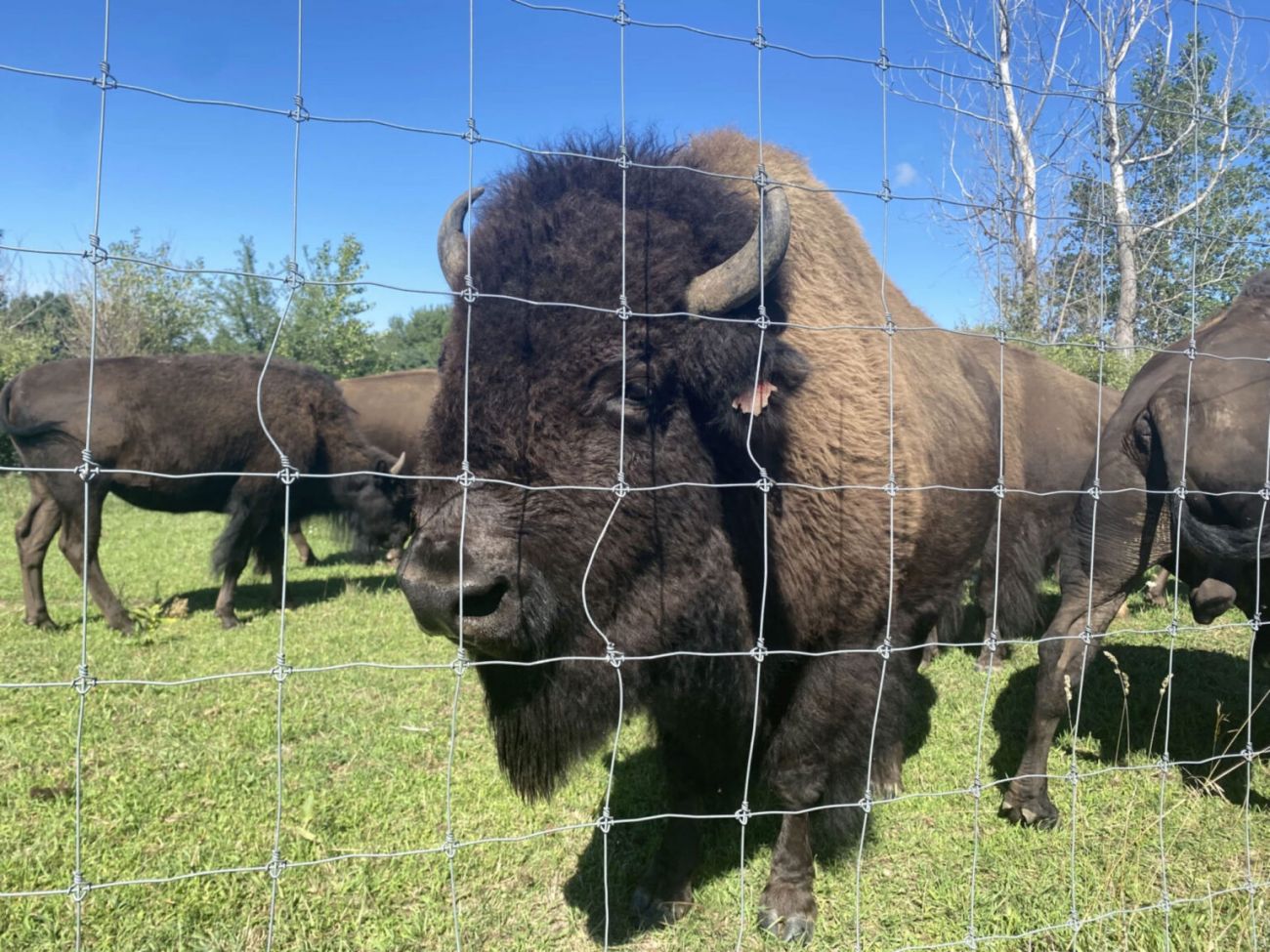 A bison looks through the fence at David Kirby’s ranch on the Leelanau Peninsula in northern Michigan. (Lily Guiney/IPR)

These characteristics make for a symbiotic relationship between the bison and the land they inhabit, allowing local vegetation to thrive and requiring limited alterations to their pastureland. Other than putting in fencing, water sources, and removing a few trees, Kirb hasn’t changed anything on his property for the bison to live healthy lives.

And in a time where farm-to-table, ethically produced meat is highly desirable, going back to the roots of the land with bison can be lucrative.

On a summer afternoon at Sleder’s Family Tavern in Traverse City, someone is probably eating bison.

Beth Schram, the manager of the restaurant for 30 years, remembers when its famed buffalo burger was having its biggest moment around seven years ago.

“There was a shortage of it, and that was the problem,” Schram said. “And then with the big spike where everybody decided to get healthy, that’s when we got into a little bit of a jam.”

Bison meat netted features on the Food Network and in Bon Appetit magazine as part of the health-food craze of the mid-2010s, around the same time that Americans began their obsession with avocado toast and alternative milks.

Schram said the tourists who frequented Sleder’s at the time were excited to find bison meat on the menu. Back then, the beef alternative was gaining traction amongst carnivorous foodies as a leaner, more protein-packed way to eat a burger or jerky. Sleder’s had been serving the buffalo burger long before it was trendy, but the spike in popularity was noticeable.

“They order it and they’ll sub it out for the other hamburgers,” Shram said. “They just enjoy it, and they eat the heck out of it.”

Now, bison are on the upswing again as ranchers and government officials aim to increase their populations across the United States. And that could have implications for other livestock operations.

If cattle can be managed in a way that makes them similar to bison, they can have a positive ecological impact on the land, said Jason Rowntree, a professor of animal science at Michigan State University and a beef educator for MSU Extension’s Lake City program.

“We can take beef cattle in a proper management system and manage in a way that’s symbiotic to nature, similar to how the bison traversed the plains,” Rowntree said.

Bison have a methane output similar to that of cattle, but experts say they’re able to offset it in ways that many commercially-managed cows just can’t. Their habits as wandering grazers don’t overwhelm their fields, and their lighter weight keeps them from trampling vegetation in the way cattle tend to.

Rountree said management of cattle on larger commercial farms is typically geared towards maximum productivity and clearing a bottom line, and it works. The downside is that this livestock management style can be environmentally detrimental, but it’s not unfixable.

“If we improperly manage, we can have issues and overgrazing, desertification,” he said.

“We can have challenges to biodiversity.”

But Michigan’s cattle farming landscape is made up mostly of small family operations, where making that change in management can be more attainable.

Remaking cattle farming in the image of bison might seem like a long shot, but bison farmers know that their animals have a unique opportunity to make positive environmental change.

BACK ON THE FARM

There’s just no ignoring the presence of a bison herd in Northern Michigan. Looking out over the Leelanau hills, the sight of Kirb’s bison evokes a sense of peace and connection to the land.

As he walks the fenceline, feeding them handfuls of grass and scratching their giant foreheads, the bison follow Kirb with an affectionate curiosity. It’s a ritual of his. He calls it “joining the herd.”

“If I were to die and go to heaven, and Saint Peter would say, ‘Welcome, welcome to heaven, what would you like?’ and I would say, ‘What do you mean?’ and he says ‘Well, you can have anything you want,’ I would say, ‘Oh geez, I want a bison herd,’” Kirb said. “And so I’ve got one.”