Surging waters have erased his beach, swallowing more than 100 feet in six years. December winds pushed waves past a giant seawall built to protect his home, lapping at a catamaran that once took 20 minutes to haul to the lake.

This year, nearby parks and roads in this resort town in west Michigan have closed because of nearly record-high waters in Lake Michigan, and the city’s fire department has repeatedly pumped water from a downtown condominium complex parking lot to prevent tenants from being subsumed.

“The prevailing feeling is we are all a bunch of rich people if we live on the water, and we should all know better,” said Suydam, a retired commercial pilot who inherited his impressive home on a bluff. “But the fact is, there are people who benefit from high waters and could help.” 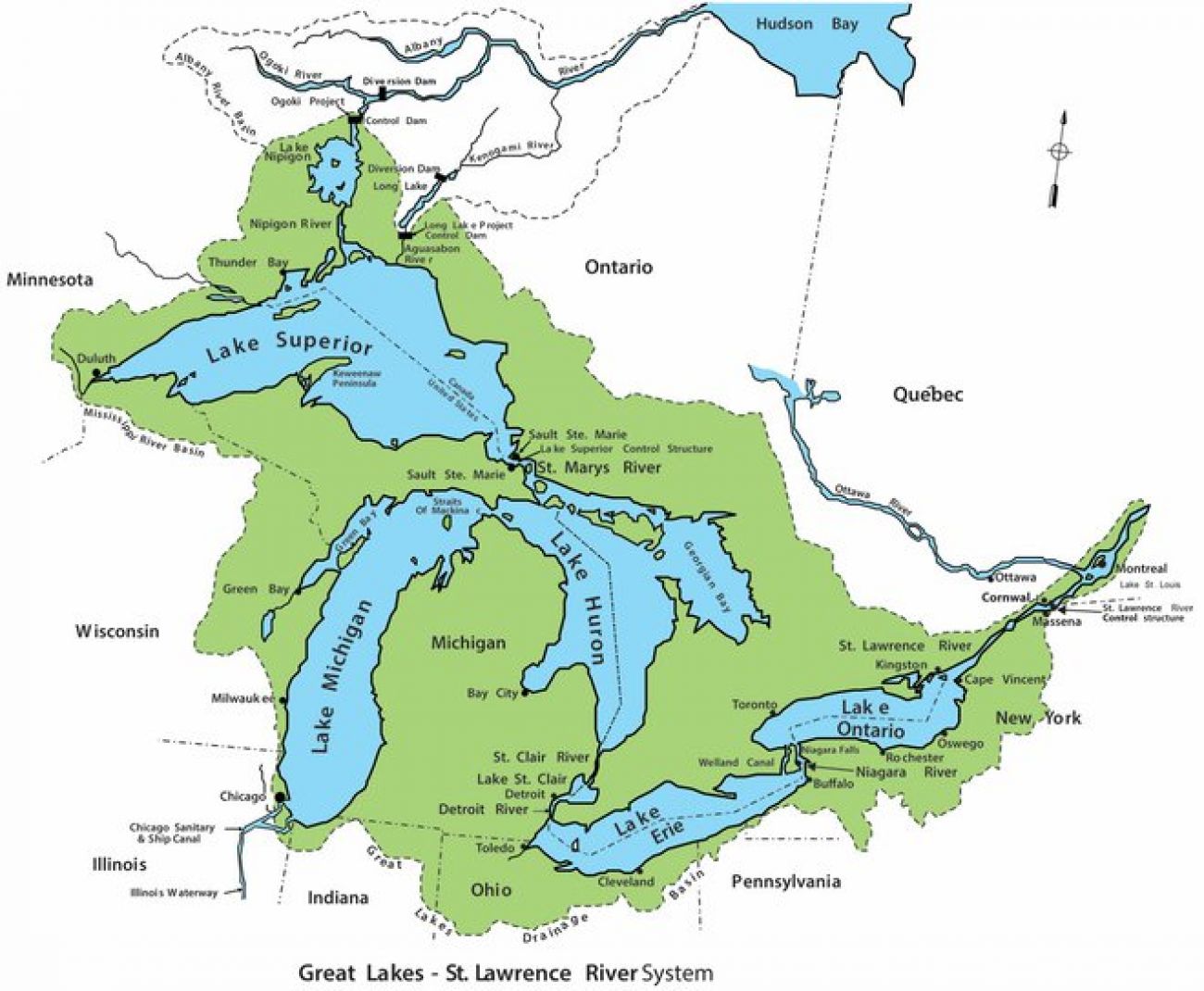 He’s referring to Ontario. More than 800 miles to the north, the province owns dams that release 42,000 gallons of water a second into Lake Superior. Known as the Long Lac and Ogoki diversions, the dams are part of Ontario’s vast hydropower system and, every day, dump the equivalent of two medium-size rivers such as the Kalamazoo and Muskegon rivers into the Great Lakes.

As historically high waters threaten property owners and municipalities along Michigan’s 3,288 miles of shoreline, a movement is brewing to pressure Ontario to temporarily halt the dams until the lakes recede.

The dams are the only diversions of water into the Great Lakes –  and they’re at the center of emerging, emotional debate about how human intervention creates winners and losers as waters rise and fall, as they have wildly in recent years.

The diversions have raised water levels of Lakes Huron and Michigan 4.3 inches since their construction in the 1940s. That’s a pittance since the lakes are now 3 feet above long-term averages. But with lakes forecast next month to be 11 inches higher than in January 2019, property owners say every bit helps.

“God affects the lakes in a matter of feet. Humans affect them in inches, but when you are dealing with these extremes, inches make a big difference,” said Roger Gauthier, a retired hydrologist for the U.S. Army Corps of Engineers. 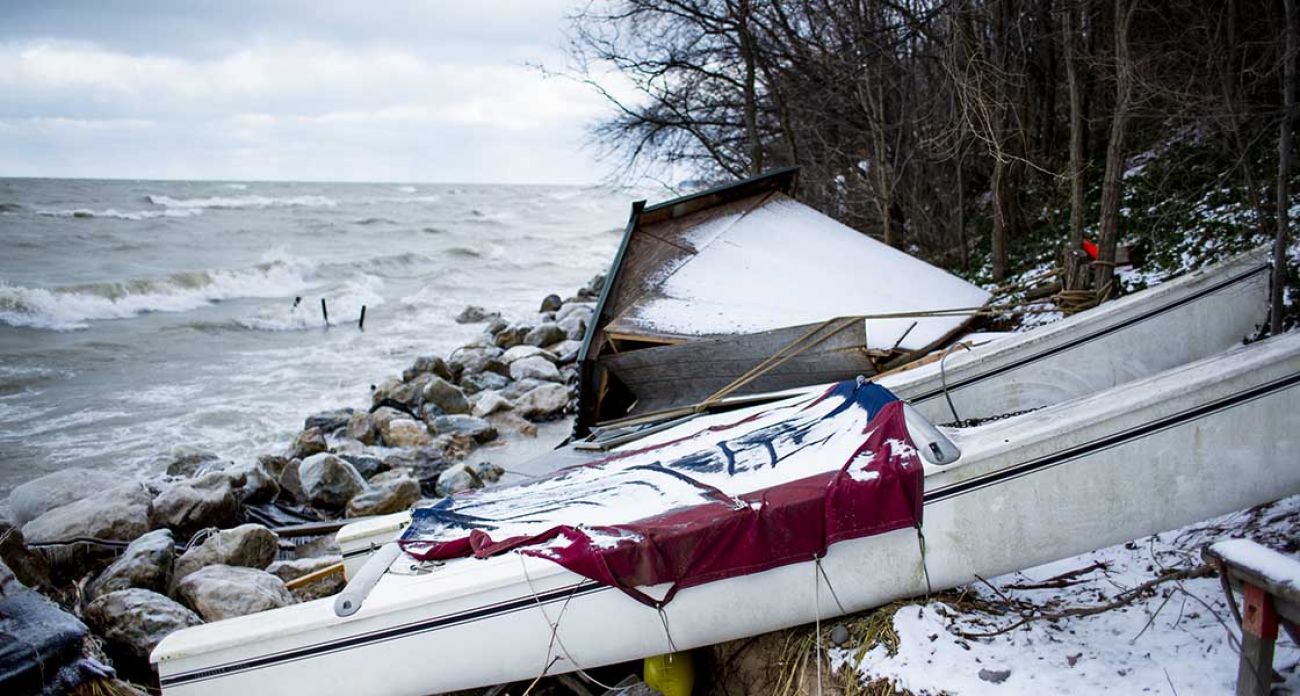 Gauthier lives in Cheboygan in a house whose bluff has eroded by 30 feet in recent years. He leads a property owners group, Restore Our Water International. In November, the group joined homeowners along Ontario’s Georgian Bay in a petition to the International Joint Commission (IJC), a binational group that resolves boundary water disputes, to take steps to declare a crisis and initiate steps to pause the diversions. A third property owner group also has made the same request.

Lyndsay Miller, spokeswoman for Ontario Power Generation, which operates the dams, told Bridge in an email that the discharges “are a relatively small contributor to the water level on the Great Lakes. (Halting the dams would lower the lakes 2-3 inches over two years, according to an International Joint Commission report.)

“The impact of ceasing the diversion would not likely even be noticed by a property owner,” Miller wrote.

“Water management is a complex discipline. There are often difficult decisions with competing interests which need to be considered and balanced. In a critical year [of high waters] the objective is often to do the most good with the options available but that does not mean everyone will be satisfied.”

Michigan property owners also are lobbying Gov. Gretchen Whitmer and other state and federal lawmakers to ratchet up public pressure on Ontario to halt the diversions.

“I love Gretchen Whitmer. All we’re asking from her is to pound her fist on a few times on the table and write a letter to Ontario,” said Don Olendorf, a semi-retired schools lobbyist who lives in Saugatuck Township off Lake Michigan.

Asked by Bridge about the diversions, Whitmer’s staff released a statement saying “we are monitoring water levels throughout the Great Lakes in conjunction with our counterparts at the International Joint Commission.”

“Gov. Whitmer will continue to encourage communication and cooperation within the region on issues impacting the Great Lakes Basin to make sure that Michigan’s voice is heard,” her deputy press secretary, Bobby Leddy, wrote in an email.

Whitmer is also weighing a request from state lawmakers for an emergency declaration to release funds for shoreline protections along Lake Michigan communities.

That would give homeowners access to state resources to address erosion and clear the way for a federal emergency declaration to provide access to loans and tax relief for repairs that typically aren’t covered by insurance.

Michigan has instituted other steps, including expediting permits for seawall repair, said Nick Assendelft, a spokesman for the Michigan Department of Environment, Great Lakes and Energy. Since Oct. 1, the state has issued 316 permits; 70 percent of which were processed within three days, rather than the typical two months, he said.

The state also is working with communities to map threats to sewers, power lines, bridges and other infrastructure if water continues to rise, Assendelft said.

Likewise, the U.S. Army Corps of Engineers since May has advised leaders of hard-hit counties Allegan, Bay, Macomb, Monroe, Muskegon, Ottawa, St. Clair and Wayne, as well as the City of Detroit, said Krystle Walker, a Detroit-based emergency management specialist for the agency.

Homeowners need more, said Olendorf, who is on the board of the 200-member Lake Michigan Shore Association property group.

“We are getting hammered pretty good,” he said. “Those of us who have the resources to protect ourselves can, but those who don’t are screwed.” 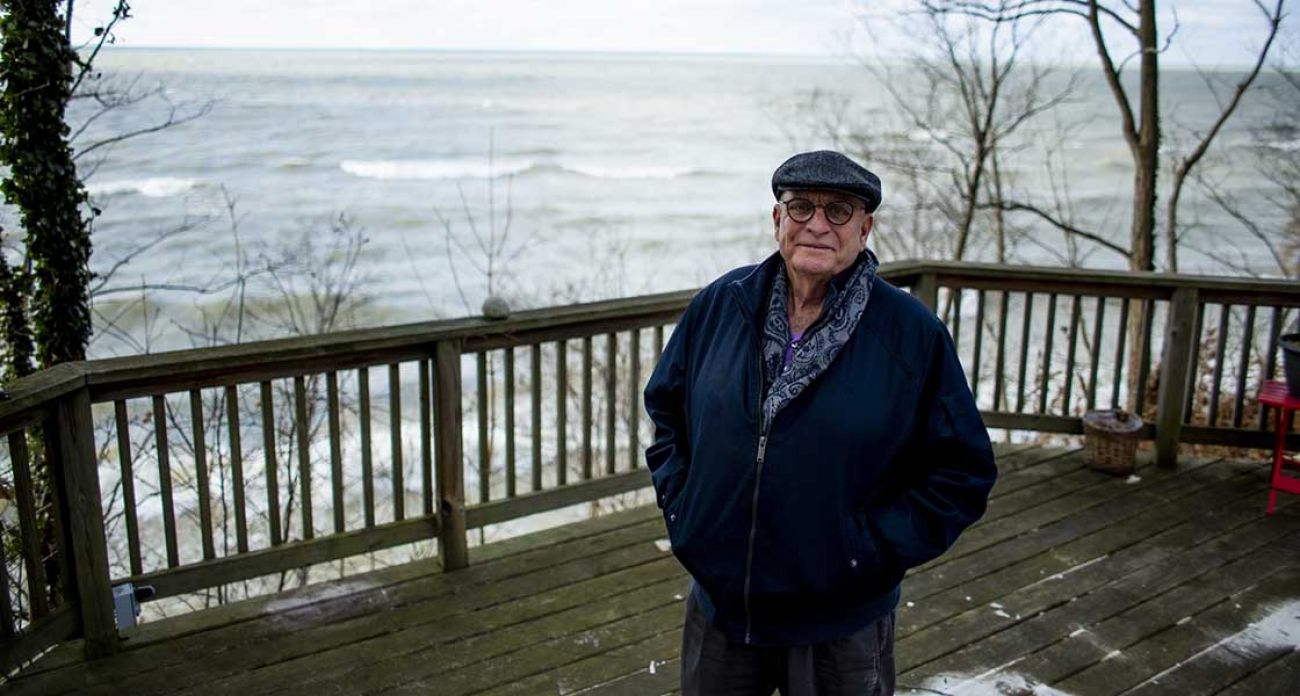 Olendorf faces a $150,000 bill to build up his seawall along his 90 feet of beach frontage. He can afford it, living on a stately road where homes sell for $1.5 million to $2 million. Nearby homes are owned by industrialists and  lawyers investing more than $1 million in seawall repairs. Minnesota Vikings quarterback Kirk Cousins has a home a few miles up the road.

But water is an equal-opportunity destroyer, and Olendorf said the narrative of the foolishly wealthy building dream homes too close to the lakes ignores the extraordinary weather conditions of recent years.

After record high waters in the 1980s, most communities passed ordinances requiring new homes to be built farther from the lakes, some 200 feet. It turns out that wasn’t enough, now that waters are at or approaching record highs after nearly 20 years of low waters.

The damage extends statewide. In Detroit, some homeowners along the Detroit River are still cleaning up from July floods. In the Upper Peninsula, roads to the Porcupine Mountains are threatened by erosion. Since last fall, 13 homeowners along Lake Michigan have applied to the state to move houses away from eroding shorelines, state records show.

“I was born and raised here. I ain’t rich,” said Ric Curtis of Ganges Township near Saugatuck, who is on the board of the Great Lakes Coalition for Shoreline Preservation property group. 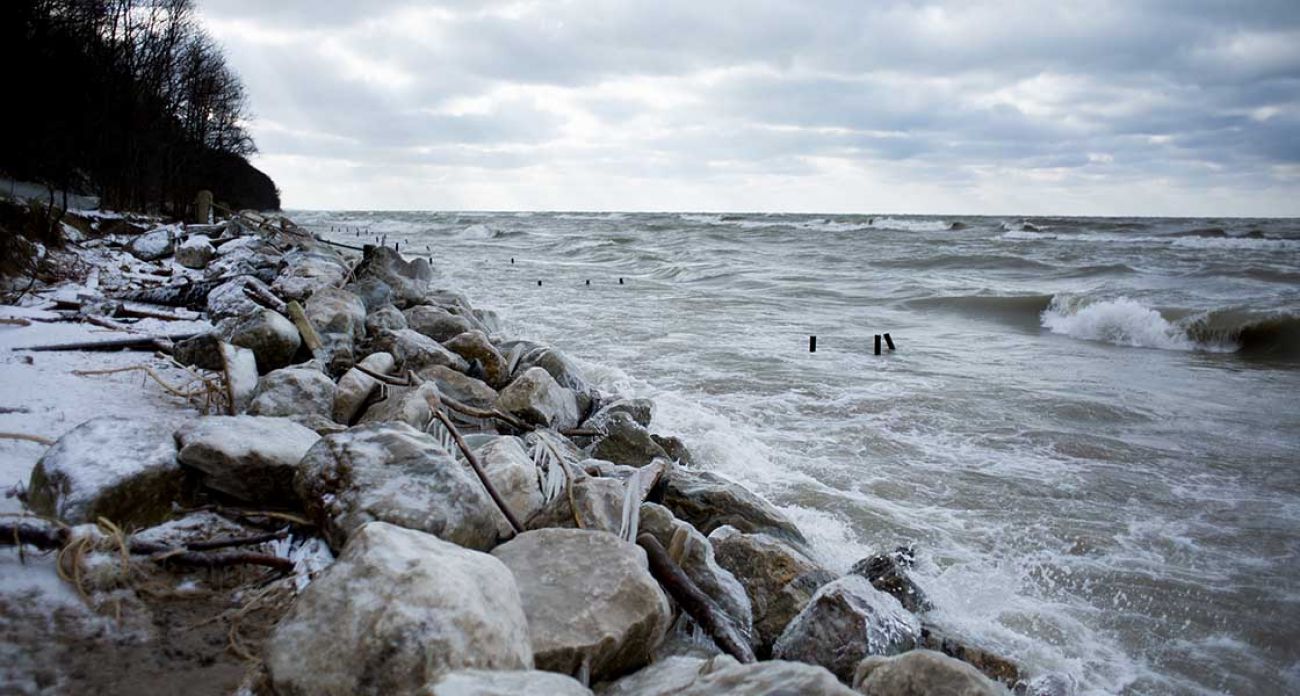 The group, which represents more than 1,000 homeowners, last month sent a separate letter to the IJC to asking to halt the diversion of water into the Great Lakes.

It’s the latest salvo in a century-long debate over the human impact on water levels that began in 1900, when Chicago reversed the direction of the Chicago River to pull water out of Lake Michigan.

The Canadian dams went up 40 years later to produce energy during World War II. Now, they’re part of a network of dams and 66 hydro stations that provides 25 percent of the power to Ontario, a province of 14.5 million residents.

The Chicago diversions –  which lower lakes by 2.4 inches –  were blamed when waters were historically low during the past 20 years. Now that waters are high, it's tempting to seek relief by stopping the Canadian diversions, but that won't help most property owners,  said Peter Annin, a professor at Northland College in Ashland, Wisconsin.

“When humans build infrastructure by a lake, they want it to be the same, but on the Great Lakes, that’s the bargain you’re in for: Water levels vary,” said Annin, who is author of the book “The Great Lakes Water Wars.”

“We’re talking about inches here. What would really bring relief to property owners in Michigan and Wisconsin is feet.”

Another controversial diversion, for the Foxconn Technology Group in Wisconsin, takes as much as 7 million gallons per day out of Lake Michigan. The Ontario diversions, in contrast, put 3.6 billion more gallons per day into lakes, which overall contain 6 quadrillion gallons (enough to cover the United States under 9 feet of water.)

Miller, of the Ontario Power Generation, said she couldn’t calculate how much the Long Lac and Ogoki diversions contribute to the province’s overall power generation.

“The Long Lac and Ogoki diversions have been in place for decades. The local environment and economies have evolved over more than 50 years with this particular flow regime in mind,” she wrote in an email.

Among other things, an IJC report warned that ceasing the dams would cause massive flooding in Albany River basin lands in northern Ontario that are populated by indigenous people.

“We recommend the governments come to grips with the impacts of [halting] these diversions before taking any action,” Jeff Kart, a consultant for the joint commission, told Bridge.

The binational group, per an agreement known as Plan 2012, tries to balance the mean levels of the Great Lakes but only has nominal power. It can advise, write reports and issue recommendations, but the ultimate decision on halting dams would rest with Ontario.

By design, the IJC moves slowly and takes years to study issues. By then, the Great Lakes probably would have already receded, Annin said.

Since record-keeping began in 1860, water levels have always fluctuated over five- to 10-year periods, depending on precipitation, ice and other factors. With climate change, though, unpredictability could now be the rule, said Gauthier, the retired hydrologist.

By mid-century, most scientists believe rising temperatures will “take a toll on the lakes” and lead to a longer period of low levels, said Dana Infante, a hydrology professor at Michigan State University.

Despite the uncertainties, governments should do what they can now, Gauthier said.

“If you cause the lakes to be artificially high,” he said, “you have an obligation to fix it.”