Promptly, the babies were rushed to the neonatal intensive care unit and put on breathing support for their underdeveloped lungs.

“You wait for this moment to hold your child and then you can’t,” she told BridgeDetroit. “All of a sudden, these living things that are inside of you, that you could feel, are not there. And then you see them connected to breathing support and feeding tubes. No parent should have to experience that.”

Lapetina formerly lived in Corktown, not far from southwest where residents have long been burdened by industrial pollution. She said her babies spent three weeks in intensive care before she was able to take them home.

The northwest Detroiter’s experience is one of many that cements the city’s place as a national leader for the most preterm births – and Wayne State University is setting up a new research center to collect more data on why.

WSU in September received an $11.3 million grant from the National Institutes of Health to investigate how one type of air pollution – volatile organic compounds, or VOCs – contribute to preterm births. The five-year grant has funded the formation of the Center for Leadership in Environmental Awareness and Research (CLEAR), where researchers will study the link between VOCs and adverse birth and health outcomes.

In 2021, the national preterm birth rate was 10.1 percent; in Detroit, the rate was 14.6 percent. Similarly, the rate of infant deaths in Detroit is two times that of Michigan, while other maternal and infant health markers, such as prenatal care and birth weight, were worse in Detroit compared to the state. The impact is exacerbated for Black mothers. In Michigan, the preterm birth rate for Black mothers is 62 percent higher than the rate among all other women, according to the March of Dimes, a nonprofit research organization advocating for maternal and infant health.

VOCs are generated during industrial processes and are found in common household items such as cleaners, disinfectants, and paint. The effects of VOCs on human health range from short-term issues like irritation of the eyes, nose, and throat, to being a suspected contributor to cancer. In Detroit, many sites are contaminated with VOCs, and researchers hypothesize that the pollutant contributes to Detroit’s high preterm birth rate.

“There really hasn’t been a significant body of work that’s been done till this point in time trying to understand the environmental link to that [preterm birth] rate,” said Carol Miller, a civil and environmental engineering professor at Wayne State and co-leader of the new center.

A birth is considered preterm before 37 weeks; as a result, a newborn might experience breathing and feeding issues, developmental delays, or problems with seeing and hearing.

Melissa Runge-Morris, a physician and co-leader of CLEAR, said the medical field is lagging in its understanding of how environmental factors contribute to health outcomes compared to lifestyle and genetic factors.

“As far as environmental exposures, all of medicine is playing catch up,” she said. “We’re no different here in Detroit.”

The center’s goal is to develop new testing methods for VOCs and find ways to mitigate their health effects. The center is headquartered on Wayne State’s Detroit campus, and uses Detroit as a primary research site. 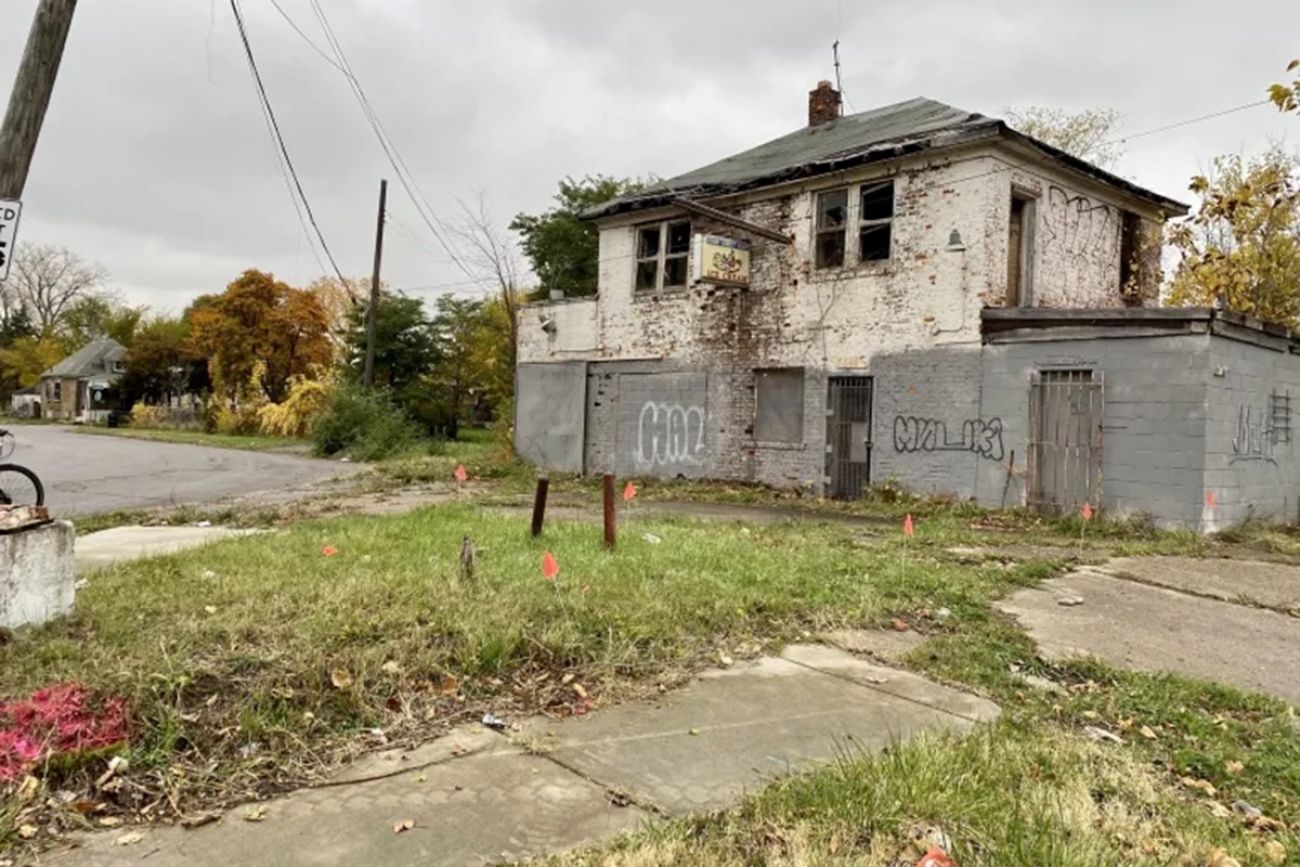 A site of an underground storage tank that was leaking pollutants. Wayne State researchers tested the site in 2020. (Photo courtesy of CLEAR)

In Detroit, “there are many” sources of VOC pollution that all “meld together” on a map, Miller said.

“Many of them are from legacy, industrial and commercial processes from Detroit’s history, as well as from now abandoned gasoline service stations,” she said. Miller said the vapors then enter homes through the ground. Detroit has more basements than many other post-industrial cities through which VOCs can seep into homes.

“This is not a new topic,” added Shanayl Bennett, a Black birth and postpartum doula and maternal health and reproductive justice organizer with the Detroit-based advocacy group Mothering Justice.

Bennett said she herself suffered from a stillbirth, the loss of a baby after 20 weeks.

“Detroit has so many impoverished communities, small communities in areas of food scarcity and just unmet resources. There are sadly a lot of women who do experience having a low birth weight baby or having a baby preterm,” she said. The contributing factors, she added, are numerous, including high stress, improper diet, financial barriers, and pollution in the air and water.

Bennett said she also sees families with everything they need for a safe and healthy pregnancy still experience adverse birth outcomes.

“I’m glad someone is getting money to do some more research,” she said.

Kara Hamilton-McGraw, a maternal and infant health director at March of Dimes for Michigan,  said the issue of preterm births is difficult to tackle because of how many potential contributing factors exist.

“They’re multifactorial, there are lots of reasons, and sometimes it’s difficult to parse out what one reason might have contributed,” said Claudia Richardson, medical director of the Detroit Health Department.

Although there has been a mix of private and public initiatives in Michigan to address maternal and infant health, with some success, they are “too far and few in between,” she added, noting that tackling  the issue requires more multi-year funding.

Richardson noted that the city partners with multiple organizations to assist pregnant mothers and their infants.

One example, she said, is SisterFriends Detroit, a program that supports mothers from pregnancy to their child’s first birthday. Richardson said 88 percent of mothers in the program were full-term before giving birth.

Another effort, Make Your Date, partners with SisterFriends to provide expectant mothers with care. The program was a target of controversy in recent years amid city and state investigations into claims of a potential abuse of authority over whether Mayor Mike Duggan’s administration gave preferential treatment to the effort, which is led by his now-wife Dr. Sonia Hassan.

Richardson said it’s “exciting” that conversations regarding environmental risk and maternal and infant health are happening, as the link is still not well understood.

What’s unique about the CLEAR program, Wayne State researchers told BridgeDetroit, is its collaborative model. The center has 31 staff from a range of disciplines, including epidemiology, engineering, medicine, and education, and includes leaders from the community. An important goal of the center, Miller said, is training the next generation of scientists to tackle complex problems with an interdisciplinary framework.

“The idea is not to show everybody how polluted this place is,” added Runge-Morris, but instead to create solutions, working with authorities and residents to implement solutions.

“It’s not enough just to show where contamination is in our city and how it’s affecting people,” Runge-Morris said. “We need to know how to clean this up and make Detroit, in our case, a safer place to live and work.”