Secretary of State Jocelyn Benson has created controversy with her decision to switch branches to an appointment-only system following the pandemic.
June 8, 2021
Sergio Martínez-Beltrán
Michigan Government
Michigan Secretary of State

LANSING— Starting today, the Michigan Secretary of State’s Office will increase the number of daily appointments it has by 25 percent.

Following complaints from Republicans and drivers about an appointment-only system at branch offices, Secretary of State Jocelyn Benson announced Tuesday that her office will add 350,000 slots at branches statewide.

Half of those slots will be for advanced appointments, while the other half will be for next-day visits.

“We're able to do this after discussions with our frontline workers who, concerned about the chatter here in Lansing to revert back to a broken, take a number system, suggested that they could work harder and faster to be able to handle more transactions each day efficiently and quickly,” Benson told reporters.

Benson’s announcement comes after weeks of criticism after she announced her plan to move the Secretary of State’s branches to an appointment-only system.

She has said the move is needed because of a backlog in the system caused by branches temporarily shutting down due to employee exposure to COVID-19 and the Legislature extending registration deadlines throughout the pandemic.

“It's an extraordinary testament not just to their dedication to the department, but their recognition that having residents schedule their visits ahead of time is a vastly superior way of doing business,” Benson said.

Last week, Benson said her department needed the Legislature to appropriate $25 million from the state’s federal stimulus money to add 500,000 appointments by the end of the current fiscal years, which goes through Sept. 30.

She said the money was needed to expand business hours to evenings and weekends.

Benson said her department still needs the money, but that it was able to add the new 350,000 appointments by shortening the current 20-minute slots to 10 minutes.

“I have a responsibility to serve the people of Michigan and I'm going to fulfill that responsibility by finding ways to, as we've announced today, work independently to increase the efficiency of our services,” Benson said.

On Tuesday, Benson acknowledged “there is value in being able to walk up to a branch and talk with a member of our team.”

She said that effective immediately, every branch will have a staff member who will be available to help those who walk in to schedule an appointment. Benson said they could be served right away, as long as there is an availability.

Meanwhile, Benson said those in need of a disability placard will be able to walk into a branch and will be guaranteed service.

The Democratic secretary of state has said she doesn’t want to go back to the previous system that allowed people to walk in, take a number and wait for hours for their turn.

She has said the best way to modernize her agency is by continuing to ensure there’s enough appointments online and enough staff in the agency’s call center to schedule additional appointments.

She has also said extending the deadline for registrations might contribute to more backlog.

Last week, Sen. Ruth Johnson, R-Holly, introduced a bill package that would extend the deadlines for driver’s licenses and other state IDs until Sept. 30.

Benson’s stance on walk-ins has put her at odds with Republican lawmakers, who have said doing only appointments presents an equity issue, since some people like the elderly and those in rural communities might have challenges accessing the internet to make them.

He also bashed Benson for not adding more appointments sooner.

“Just a week ago she claimed to need an additional $25 million to add more appointments,” Johnson said. “We made it clear that we were not interested in throwing more money at the SOS and, lo and behold, she finds a way to add 350,000 more appointments without more money.” 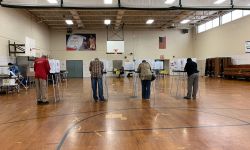 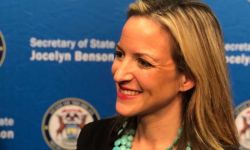 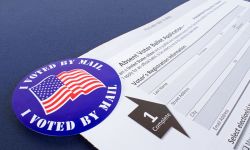