COVID raged in Michigan prisons. Life outside isn’t easy either for parolees.

Robin Roberts, 55, of Detroit, was paroled this winter after 11 years in a Michigan prison. He is receiving help from a foundation run by Bob Schwartz, whose group provides parolees with gift cards and other assistance. (Bridge Michigan photo by Jonathan Oosting)
March 30, 2021
Jonathan Oosting (Email)
Michigan Government
Coronavirus Michigan

ROYAL OAK — After 11 years in prison, Robin Roberts returned to an empty home in Detroit this winter. He had an inflatable mattress, one set of clothes and thousands of dollars in tax debt from the house.

Things already would have been different upon his return, but the COVID-19 pandemic accelerated the digital revolution, pushing keys to survival for parolees to the internet. Everything from job applications to Secretary of State bookings were online, confounding the “old school” Roberts.

He said he had to borrow his sister’s cell phone just to send text messages.

“I took (the coronavirus) serious when I was in, but I did not know how serious it was until I got out and actually started trying to get things done,” Roberts told Bridge Michigan.  “And my thing is, I’m ready to start living again. Prison for me was just temporary.”

Experts say the global pandemic has made a challenging transition harder for those leaving prison. Low-wage jobs became scarce as industries shut down last year. Services moved online, creating obstacles to aid programs, including federal stimulus checks that were based on prior tax returns.

Michigan paroled 8,000 inmates last year, and nonprofits and other groups are stepping up efforts to help them succeed because experts say the first six months to two years after prison is critical. Those who secure jobs, housing and other basic needs early in their return are less likely to end up back in the corrections system.

“Returning during COVID I think has been a huge challenge for people,” said John Cooper, executive director of Safe & Just Michigan, a nonprofit that helped steer a series of recent criminal justice policy reforms that aim to reduce mass incarceration.

Paroles remained consistent from 2019 but represented a higher ratio because of the state’s declining prison population of 33,000. The parolee tally doesn't include the release of low-level offenders from county jails.

Michigan’s recidivism rate has dropped to an all-time low, down to 27 percent in 2017 from a peak of 48 percent in 1998, and experts say increased opportunities are essential to continue the trend.

The state urged social distancing and other mitigation measures, but “prisoners got a giggle out of it” because that was impossible inside the confines of a prison, said Roberts, who added “bad choices” led to his 2007 conviction for assault with intent to murder.

“Here it says you want us to stay 6 feet apart, but bunking one on top of another, I’m less than 3 feet to this person,” he said.

Set up to fail?

The coronavirus pandemic created a clear need to do more, so Bob Schwartz of the Here to Help Foundation in Royal Oak year launched the Returning Hope to Returning Citizens program to provide emergency grants to parolees.

The program works with Oakland and Wayne county parolees and provided 797 emergency grants to recently released inmates, a total of $310,894, according to the foundation. 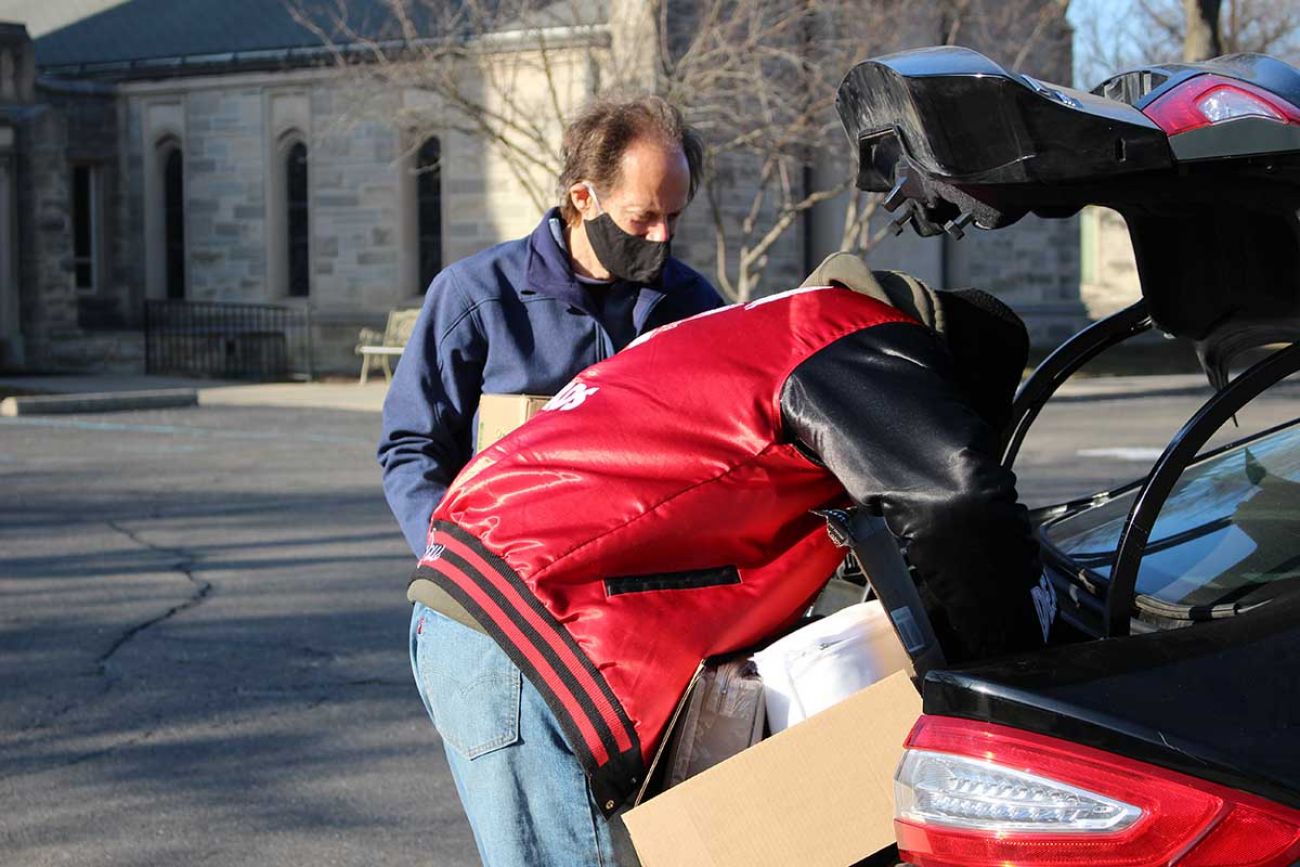 Bob Schwartz of Here to Help in Royal Oak helps pack household goods into the car of a Michigan man recently released after 43years in prison. (Bridge Michigan photo by Jonathan Oosting)

Some parolees “literally have the clothes on their back,” said Schwartz, whose foundation typically provides short-term help to families facing emergencies.

“It is really just horrific how we've set these individuals up to fail. it's almost like we want them to fail.”

Every day since August, Schwartz has donned a face mask to meet with a new set of returning citizens in a church parking lot in southeast Michigan, where he hands each $150 in Walmart gift cards to help them purchase basic necessities.

“I don't lose sight of the fact that these individuals have at one time in their life, committed a heinous crime that they were sentenced to a lengthy prison term for, but you know, what somebody did at 18 and who they were at 18 is not who they are at 62 years of age or 64,” Schwartz said.

For Roberts, the gift cards will mean new clothes.

“I got to go get another set of Dickies,” he told Schwartz, explaining the drab brown outfit he had on was the same one he left prison in.It’s his only clothing, and he’s been washing it by hand, making the prospect of a job search daunting, he explained.

“I’ve been doing the prison laundry line as best I could. I can’t even present myself to somebody,” Roberts told Bridge.

The gift cards are the first step in a ten-step program that will eventually reward prisoners who get and keep jobs by providing additional gift cards for work clothes, helping to pay for moving expenses, home furnishings and, eventually, a used car.

On a Saturday in mid-March, before meeting with Roberts, Schwartz helped load new pots, pans, dishes, glasses, silverware, pillows, sheets and towels into the trunk of 72-year-old parolee who had spent the past 43 years behind bars.

Schwartz, who gave up his career as an attorney to launch Here to Help with his wife in 2006, also works with local employers to line up job opportunities for parolees.

And he has a connection at the Secretary of State’s Office who will help parolees get next-day appointments to obtain identification often needed for jobs or housing, he said.

“It gives them, for the first time perhaps in many of their lives, someone that they know is supporting them,” Schwartz said. ”And I don’t mean monetarily.  I mean just emotionally. That ‘we’re there for you and we want you to succeed.’ And I think that they in turn do not want to disappoint us, so they keep moving forward and working hard.”

Participants including Usamah Carswell call the program “a blessing.”

Released from prison in early 2020 after 23 years, the 43-year-old Carswell said he heard about the charity when he was  struggling to pay for a room at a Detroit motel and was effectively homeless — living in the motel laundry room.

Over the course of several months, Schwartz helped Carswell put a security deposit on a shared rental house, paid for home furnishings, a computer and a used car so he could get to a manufacturing job he landed at an auto supplier.

“Bob just swooped in like an angel,” said Carswell, who was initially sentenced for unarmed robbery and later convicted of assaulting prison employees.

He described the spring of 2020 as particularly challenging.

“There were big-time restrictions, one because of COVID, and the other due to the fact that I was still on probation,” he said. “I couldn’t really move around.”

The Michigan Department of Corrections runs its own “offender success” program that officials credit with contributing to historically low recidivism rates. Inmates are offered educational and skilled trades training opportunities in prison, and community services when they are on parole.

A third Vocational Village set to open at the Huron Valley Women’s Facility was delayed because of COVID-19 but will also include classes in 3D printing and cosmetology.

The “success rate” for Vocational Village graduates “stayed roughly the same” during the pandemic, with about two-thirds of those offenders typically employed, Gautz said, noting there was not “much of a dip” for those trained in welding, plumbing and electrical.

But many inmates leaving prison struggle to find jobs. The employment rate for general parolees is roughly 30 percent, Gautz said.

Organizations like Here to Help do “fantastic work,” but the state’s re-entry system remains a “work in progress,” said Cooper, the executive director of the Safe & Just Michigan policy nonprofit.

“There's a lot of good things that are happening within MDOC, and within communities, but the need is orders of magnitude greater than the resources that are available to support it,” he said.

Michigan is at the forefront of a national criminal justice reform movement to “bring data to bear on policy changes” that could help more recently released prisoners readjust to society, said Amanda Burgess-Proctor, a criminologist and professor at Oakland University.

In a “polarized and partisan and often contentious political atmosphere” both in Lansing and nationally, it’s emerged as a unique area “where you can find common ground,” she said.

“Michigan has done a really good job on removing barriers to success for people who have been in trouble in the past,” said Cooper, calling the new expungement process, which will become automatic for some crimes in 2023, “the most expansive” of its kind in the country.

“These are all issues that were driving people into cycles of poverty and incarceration, that are really disruptive to their lives and the lives of their families,” he said.

Experts say it’s difficult to determine what, exactly, has led to Michigan’s sharp decline in recidivism rates. It's fallen in nearby states as well, including Indiana (37 percent in 2019) and Ohio (31 percent in 2018).

But for non-offenders, the ultimate promise of strengthening reentry programs and removing barriers is that the state can save money by imprisoning fewer people, and then reinvest in programs “that are designed to further improve success for people living in the community,” she said.

The programs are working so far for Charles Wittenmyer, 56. He was released last year amid the pandemic after serving 18 years for a sex crime and is now living in transitional housing.

He said he left prison “with nothing” but has managed to find a job at an auto plant in Dearborn.

Still, the challenges are vast: Without a car, he spends nearly three hours on a bus. By the time he gets home and sleeps, “I got to turn around and go right back again.

But he said Schartz’s program helped him buy clothes, a ratchet set and is helping him try to find housing closer to his job until he can get a driver's license and a car.

“I’m excited waiting to get my license so that I can get a car and get a place and get my life back,” Wittenmyer said.