With only a few minutes left to fill out a state application for government assistance, Terry Beurer was struggling. Every page was a thicket of eligibility requirements and redundant questions about his household expenses and income.

Luckily for Beurer, it was only a test.

He and some colleagues at the Michigan Department of Health and Human Services were filling out the application with an eye toward understanding -- and eliminating -- the hurdles that prevent many Michigan residents from finishing the form.

Working with a Detroit design studio, Civilla, the state health agency is applying the principles of plain language, an approach proponents say can prune bureaucracy and help ordinary residents better understand the workings of government. The effort, while only a pilot for now, follows the lead of other states which report more efficiency and significant cost savings after adopting a government-wide, plain-language program.

By all accounts, the dreaded assistance form was a good place to start.  Beurer and colleagues tried filling out the application more than a year ago to experience what more than a million Michiganders a year go through when they apply for public assistance to pay for food, child care, emergency relief and other expenses. 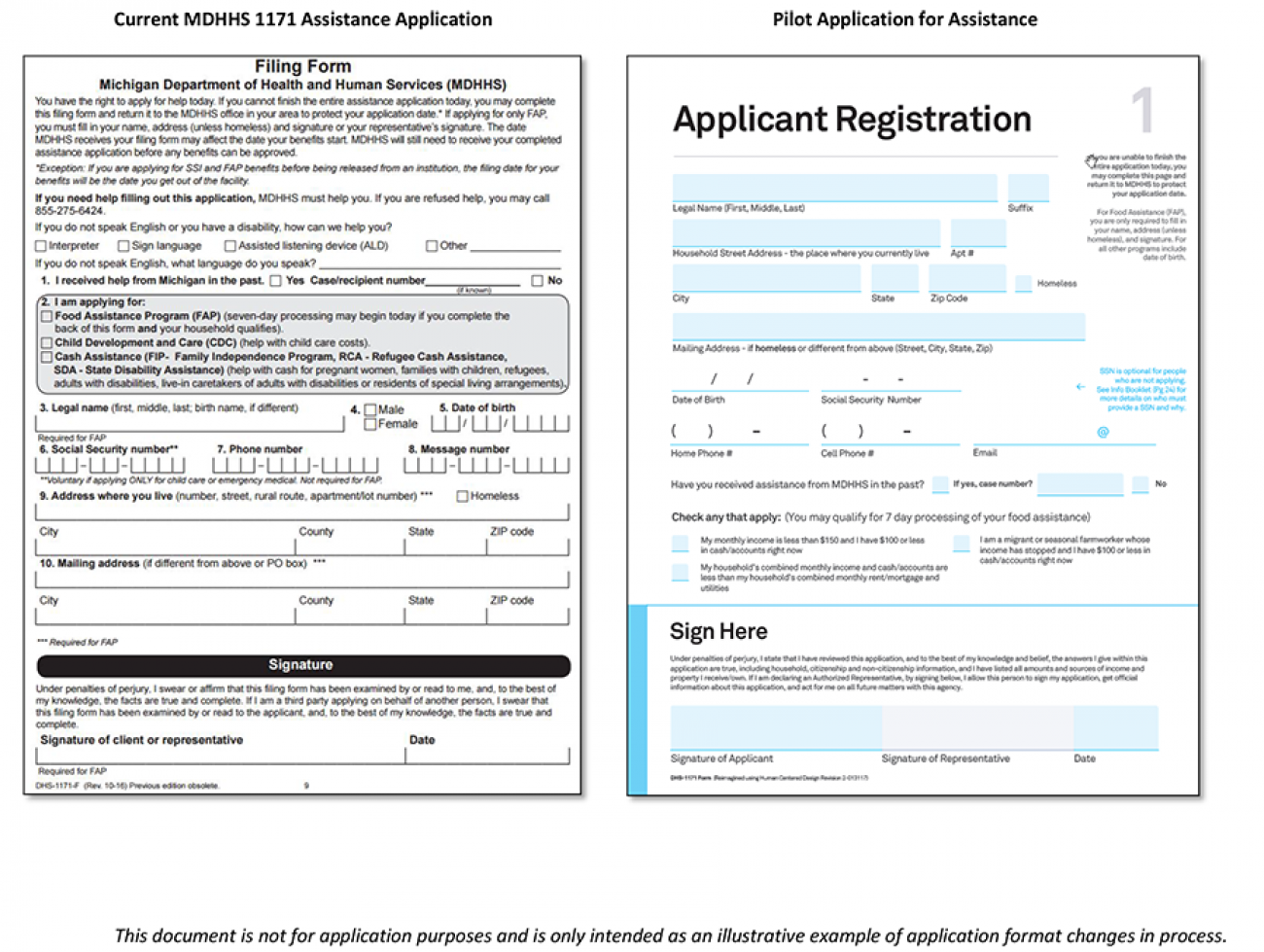 What they confronted is the longest public-assistance application in the nation -- more than 18,000 words and over a thousand questions. While residents do not face the 20-minute clock that ran out on Beurer, they do wrestle with everyday time constraints, and many are unable to finish the daunting form. It’s one reason Michigan residents leave unclaimed more than $1 billion a year in federal funds allocated for assistance programs, according to Civilla.

“It was extremely frustrating,” said Beurer, the department’s deputy director of field operations administration. “If we’re feeling frustration, what is the client feeling? We find that some of our most vulnerable people who need assistance give up and don’t get the assistance they need at that time. And we need to stop that.”

With Civilla’s help, Beurer said MDHHS has eliminated redundant questions, provided clearer instructions and trimmed the 42-page form to 18 pages, and with fewer words per page. In January the department introduced the shorter form at its Hamtramck and Eaton County field offices. The plan is to further improve the form with lessons learned during the pilot phase and roll it out statewide at the start of 2018.

It’s too early to tell if the simplified form will save the state money by reducing staff time, printing or other costs, though other states report savings.

Financial savings aside, “government has a moral obligation to communicate with its citizens in a way that they can understand,” said Joe Kimble, a distinguished professor emeritus at Western Michigan University’s Cooley Law School and a leading advocate for plain language in government documents.

Fulfilling that obligation doesn’t just mean avoiding jargon or swapping “utilize” for “use,” Kimble said. Plain language includes a range of guidelines and techniques, such as writing short sentences in an active voice, using bullet points, or breaking up text with subheadings.

“A communication is in plain language if its wording, structure, and design are so clear that the intended readers can readily find what they need, understand it, and use it,” according to the Virginia-based Center for Plain Language, a group Kimble co-founded in 2003 that advocates for plain language legislation and gives awards for clear writing.

“The legal profession has erected an impenetrable wall between people and the documents that govern their own lives and businesses,” Cooney said. “And you don’t need it. That’s a crutch.”

Michigan has made efforts over the years to craft documents that ordinary civilians can understand. But, Lansing being Lansing, bureaucratic jargon still tends to creep in.

Though she acknowledges “there isn’t an overarching plain language policy in place in Michigan.”

“The question is whether they have committed to plain language in any identifiable way,” he said. “Have they tried to make it a part of their culture? Have they strongly emphasized it? Do they have a plain-language expert on the staff?”

Kimble points to Washington and Minnesota as two states that have made a fierce  commitment to plain language and seen real benefits. Oregon and Florida also created programs to simply government documents.

In 2005, Gov. Christine Gregoire of Washington signed an executive order instructing all state agencies to adopt plain language principles and practices. She noted in the order that three state agencies had already found measurable success with their own “plain talk” programs.

For example, the number of businesses paying an often-overlooked use tax tripled after Washington’s Department of Revenue rewrote a letter to business owners in 2003 about the tax, netting the state $800,000 more than expected in use-tax revenue. That amounted to about a dollar for every penny the state spent producing the simple letter.

By 2008, 35 agencies in Washington had launched plain-talk programs, trained more than 5,000 state employees and rewritten a thousand letters and 225 other forms. In at least a few cases, the work paid off with improved efficiency and substantial savings.

The Washington Department of Social and Health Services reported savings of $25,000 a year in postage and paper alone when it simplified its communication with government benefit recipients by merging 12 separate form letters into one.

Phone lines in the Department of Labor and Industries were clogged by Washington residents confused by a letter they received after requesting public records. In 2009 the agency developed clearer instructions and saw a 95 percent drop in call volume. With less time spent answering phones, the department cut in half the time it took to process records requests. That allowed the state to save $110,000 that had been budgeted to hire two staffers who were no longer needed, even when the number of public records requests tripled the next year.

In Minnesota, Gov. Mark Dayton followed Gregoire’s lead with a 2014 executive order that required the governor’s office and all state agencies to use plain language, building on a successful program launched by the state’s Department of Revenue.

Since then, roughly 2,800 people across Minnesota’s government have received plain language training, said Melissa Donndelinger, a communications specialist in the revenue department.

The department recently consolidated 35 versions of a tax form into a single document, saving 60,000 sheets of paper per year. Staff also credit the initiative with increasing the portion of eligible taxpayers who receive their tax refund via direct deposit from 71 percent to 75 percent, again saving the state money.

“It was a culture change, a completely different way of thinking,” said Janelle Tummel, an assistant commissioner at Minnesota Management and Budget. “Rather than writing what you want to write or talking about what you want to talk about, you put the customer first.”

Despite initial challenges, state employees in Minnesota have embraced the movement, Tummel said. “Plain language is a verb now. When we circulate documents or reports, it’s like, ‘Did you plain language this yet?’ It’s just natural now.”

At the federal level, President Barack Obama signed the Plain Writing Act, in 2010, which requires “clear government communication that the public can understand and use,” and issued a pair of executive orders related to plain language in regulations. In January, U.S. Rep. Blaine Luetkemeyer, a Missouri Republican, introduced a bill that would require federal agencies to issue plain-language summaries of proposed regulations.

Critics fear a dumbing down

Still, the status quo is not without its champions.

“I can tell you I think plain language is an abomination that has caused a lot of trouble,” said Jack Stark, a retired attorney who wrote tax law for the State of Wisconsin for 19 years. Stark and Kimble have sparred in professional journals.

“I think what’s happened is the simplicity makes plain language look like it’s a panacea,” Stark said. “And at first glance panaceas are very attractive because it looks like you have a simple way of doing something. But on further examination most of them turn out to be frauds.”

Stark argues that plain language swaps a style “that has been defined and refined by first-rate minds over centuries” for simple-minded writing that lacks the clarity of direction that laws need to forbid (or allow) certain behavior. He said plain language advocates assume that all writing is the same. “That’s moronic,” he said. “Elizabethan sonnets are not written like telephone directories.”

Stark said he is skeptical that a move to simpler language can save government money. Asked what he makes of the money-saving examples Kimble cites, Stark had a simple answer: “I don’t read Kimble.”

There’s a lot of Kimble to read.

Along with editing and writing the state bar’s plain language column, he has published two books on the subject, including 2012’s “Writing for Dollars, Writing to Please,” which lays out 50 case studies illustrating how plain language could save governments and businesses billions of dollars. The book argues that readers strongly prefer plain writing, understand it better and are more likely to read a document that is easily accessible. Kimble is set to publish two more books this spring: a collection of essays on plain writing, and a children’s book, “Mr. Mouthful Learns His Lesson.”

He pushes back on the notion that government forms have to be wordy or complex to convey the intended nuance. He said law professors, practicing attorneys and government leaders are increasingly recognizing that simple writing can be more precise than legalese, and elegant in its clarity -- that in the right hands, it can be more like the language of Abraham Lincoln or Mark Twain.

“But still, it’s like you’re trying to level a mountain here—a mountain of legalese,” he said. “And it doesn’t happen overnight.”

So it is that the process of simplifying Michigan’s public assistance form won’t happen quickly.  Beurer told Bridge it was too early to draw conclusions from the pilot, though he said signs are encouraging. Residents using the shorter application are finishing in about 20 minutes, down from 45 minutes. And more are filling out the full form, and not giving up part way through. They tell the department staff that the application also feels less...threatening.

“I’ve been with the department a long time, and I’m really fired up about this initiative,” Beurer said. “This is an initiative that, when it’s all said and done, will have a lasting impact on how we serve the vulnerable residents of this state, and for the better.”