Driveway by driveway, these volunteers aim to end gerrymandering in Michigan

David Hopkinson, a volunteer for Voters Not Politicians, dedicates at least six hours every Saturday to canvassing for the ballot proposal. Here, he approaches a house in Haslett in mid-June. (Bridge photo by Riley Beggin)

It was the kind of muggy June day where anyone who dared to step outside was choked by humidity and swarmed by gnats. But just like every other Saturday, David Hopkinson hit the pavement.

The East Lansing semi-retired accountant and a handful of other volunteers fanned out on a quiet suburban street, where they’d spend the next six hours knocking on doors to spread the word about a ballot initiative that would change the way Michigan draws voting district lines.

“I'm a volunteer with Voters Not Politicians, we’re the group that's working on a ballot proposal for the fall to establish an independent citizens redistricting commission,” Hopkinson says to a man peering incredulously around the doorframe of his home in Haslett, east of Lansing. “Are you familiar with that at all?”

Hopkinson dives in, explaining how in Michigan legislators from the majority party determine voting districts every 10 years. His group wants to take that power away from politicians and give it to a 13-person commission of Republicans, Democrats and Independents, which would draw maps with input from the public as well as experts like computer programmers.

Hopkinson, a math-minded man with a professorial tone, might take it slower than other canvassers, but it’s hard to thoroughly explain the nuances of redistricting reform quickly.

At one home, he offers a “thumbnail sketch” of how commission members would be chosen, how the maps would be drawn and vetted and how they’d eventually be voted on. It takes nearly three full minutes.

Hopkinson’s audience, a middle-aged man leaning against his doorway and scratching his chin while patiently listening, responds with one word: “Complicated.”

It’s a sentiment echoed by more than one person Hopkinson spoke with that Saturday. It’s also the foundation of a legal argument that may pull the proposal off the ballot before people can vote on it. 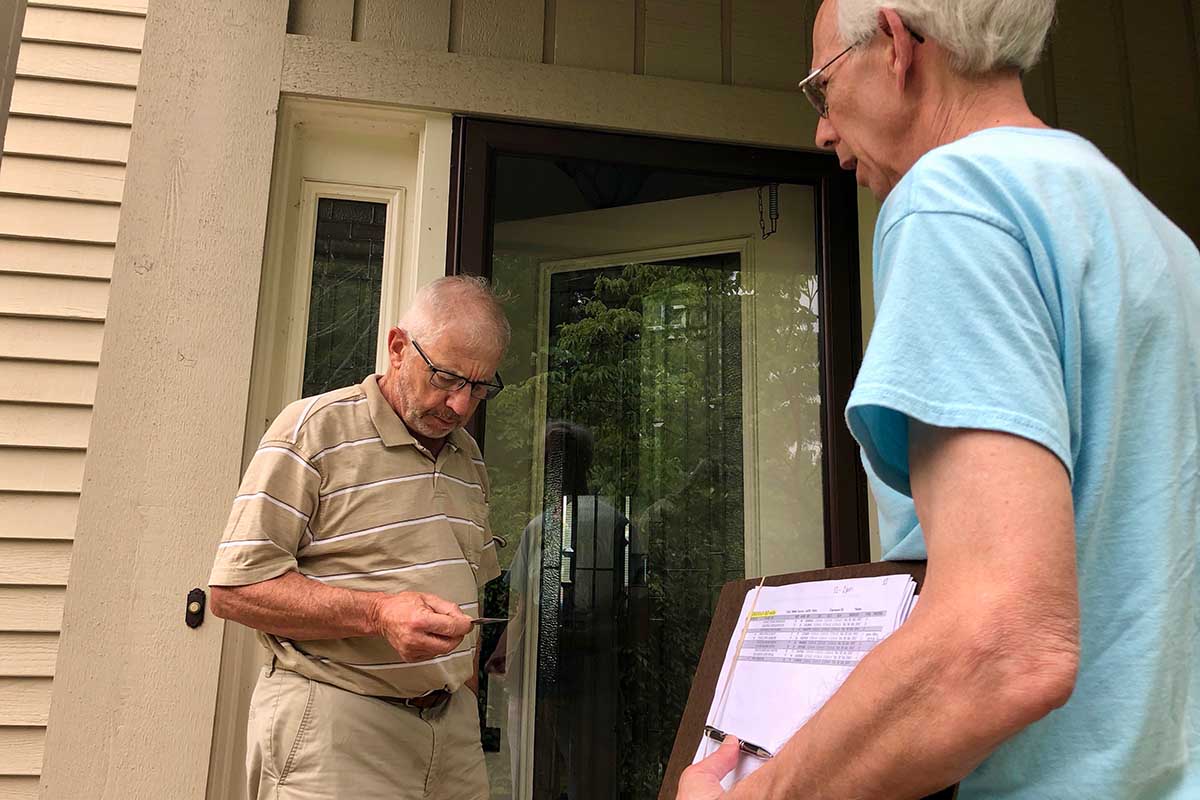 David Hopkinson speaks with a Michigan homeowner about the Voters Not Politicians proposal to create an independent citizens redistricting commission. The homeowner’s response: “Complicated.” (Bridge photo by Riley Beggin)

An opposition group funded largely by the Michigan Chamber of Commerce is arguing (along with Republican Attorney General Bill Schuette) that the proposal tries to change too many things about the state constitution at once to legally be eligible for the ballot. Instead, they argue, it would require a constitutional convention to make the change. The case is now before a Republican-dominated state Supreme Court, which heard oral arguments last week.

“It’s a very lengthy proposal and it’s a very detailed proposal,” Peter Ellsworth, attorney for the opposition group, told the justices. “It would create a super agency combining executive, legislative and to some extent judicial functions with virtually no checks and balances.”

Voters Not Politicians’ legal team counters that while the proposal is long — it is a sea of text spanning eight pages — it is narrowly focused on redistricting and thus appropriate for the ballot.

Katie Fahey, the executive director of Voters Not Politicians explains how the proposed redistricting committee will work, if it makes it to the ballot and is passed by voters.

A representative from the Secretary of State’s office has asked the court to issue a decision before the Aug. 7 primary and insiders expect it will come before the end of July, but the court has not said when it will decide. Even if the ballot proposal survives the court, volunteers will still face competition for votes this fall as other efforts pop up to oppose it.

Last year, Hopkinson and thousands of other volunteers collected more than 400,000 signatures in less than six months to get the petition on the ballot, significantly more than the state requires.

Political consultants estimate it usually costs around $1 million to get a proposal in front of voters, with much of that spent on paying petitioners to gather signatures. Voters Not Politicians organizers say they didn’t have to spend on a dime on petitioners and are instead buoyed by volunteer workers. They now say they have around 10,000 volunteers from all over the state.

The state’s leading Democrats largely support the redistricting proposal and leading Republicans largely oppose it, though Voters Not Politicians maintains it is nonpartisan.

It touts former Republican state representative Joe Schwarz as one of its board members and Hopkinson said he works with Democrats, Republicans and Libertarians who are now active canvassers. Hopkinson tells Bridge that he identifies as an Independent because he has voted for both Republicans and Democrats. Several board members have donated to Democratic candidates in the past, a point raised by Republican critics of the ballot measure.

Hopkinson said he has talked to thousands of people about the proposal over the last year and around two-thirds of those indicated they support it.

“People get that something’s not working,” Hopkinson said. “They want the power back. They want the opportunity to have some say in what happens in their lives, and you can’t blame people for that.” 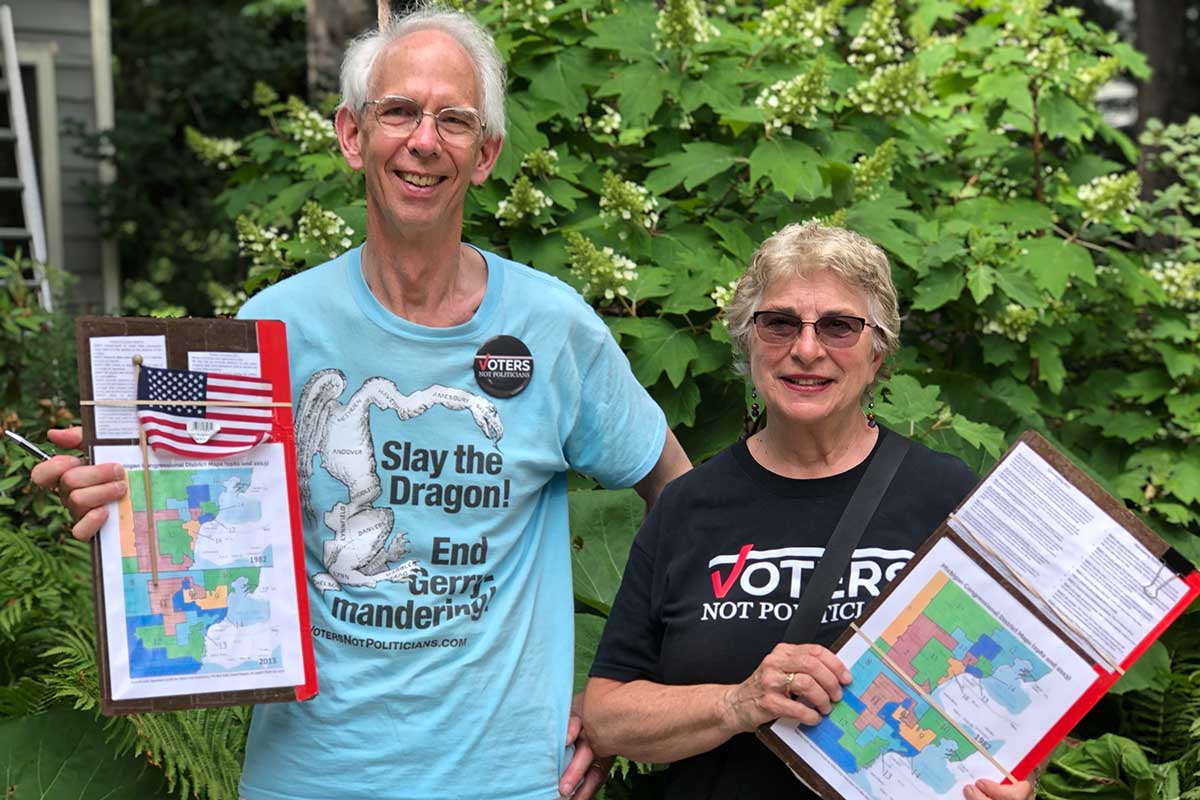 David Hopkinson and Cathy Purdum spent a Saturday knocking on doors for Voters Not Politicians in Haslett. They said they believe the current redistricting system in Michigan makes politicians less accountable to the public. (Bridge photo by Riley Beggin)

Hopkinson spoke with a half dozen people that Saturday, walking from house to house through a sleepy subdivision, along a highway with speeding cars and down meandering rural driveways.

According to data from the Michigan Secretary of State, the precinct he canvassed is politically moderate — it voted Democratic for president and Republican for governor over the last decade.

Half of the stops had enthusiastic supporters and half were skeptical or undecided. None were vehemently opposed. Like the organizers leading his group, Hopkinson didn’t shy away from the proposal’s complexity when talking with skeptics.

“One of the things I believe, hopefully not entirely naively, is if you give people enough information they can make good decisions,” he said.

Late in the afternoon, Hopkinson returned to an organizer’s house nearby. As others returned to drop off their forms documenting the pulse of potential voters, they shared with Bridge their path to volunteering. 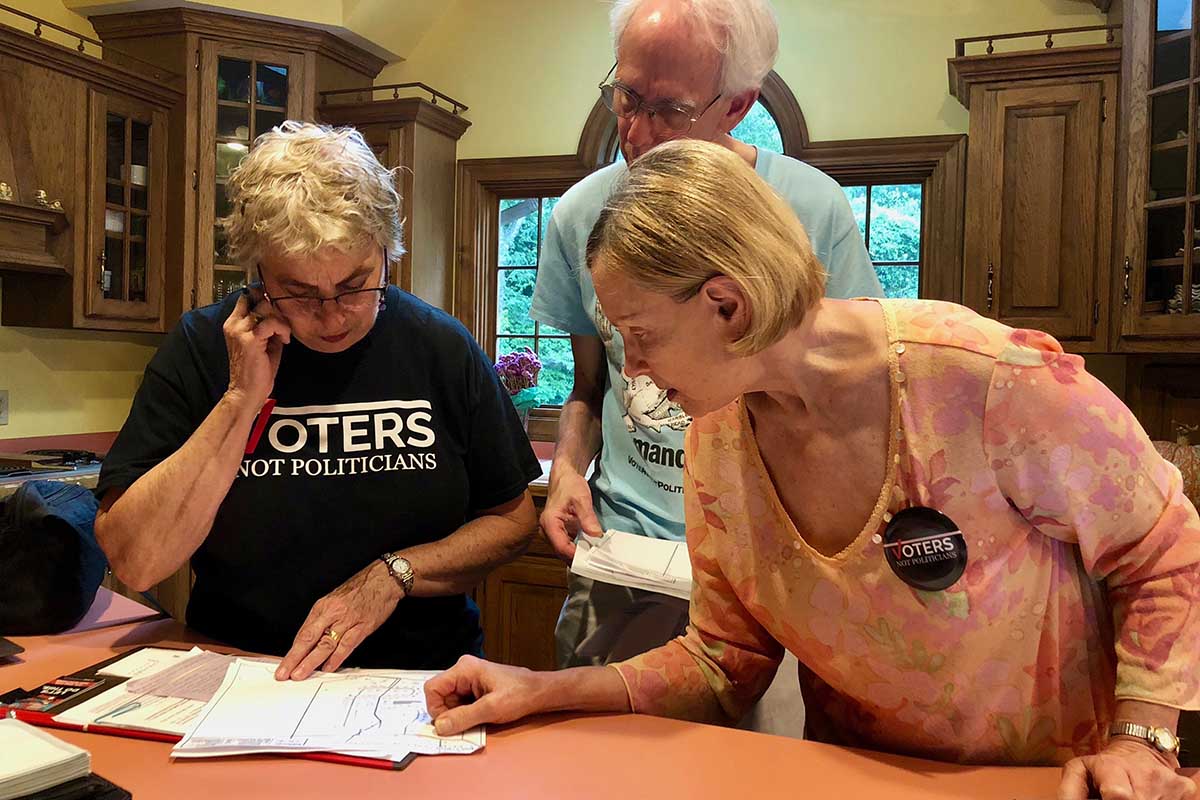 Some had started canvassing recently, pulled in by a friend. Some caught on early, grabbed by director Katie Fahey’s now-famous Facebook post two days after the 2016 election: “I’d like to take on gerrymandering in Michigan,” Fahey wrote. “If you’re interested in doing this as well, please let me know.”

Some volunteers give a few hours here and there; some work upwards of 20 hours a week. All echoed Hopkinson’s frustration with a political system they say they believe leaves some voices unheard.

“It has lots of potential to solve lots of problem because it’s so fundamental and so essential what we’re trying to fix,” Hopkinson said, adding that when people believe their vote doesn’t count they devolve into cynicism about their government.

“A lot of people are frustrated, they don’t know how to fix that. And it’s understandable, look how much effort this was. This was a huge, unprecedented effort. It’s easy to understand how almost anybody would say that’s just too much, I’m not even going to try. And that’s sad.”

So if we're against politicians drawing lines, why have 4 of each identified handpicked Republicans and Democrats, along with some folks who just refuse to admit their affiliation? Why not draw 9 random drivers license holders who know nothing but how to read a map, show them the county lines, city boundaries etc. with the allowed margin of difference, put them up for a week in a hotel pay them a $1000 each and get it done? One gets the sense that it isn't that it isn't the fact that gerrymandering exists that is the problem, it's how it's done and who it favors that is the issue.

Specifically not politicians (not allowed on the commission), voters with a particular voting history.
Not hand-picked, selected at random from a pool who volunteered, went through the full application process.
Not just the commission members, they can consult with people with expertise in the areas of programming, map making, etc. and then get public input at each step through town hall meetings.
The people are interested in solving this problem and the people will have a lot of say in this process.

David, Surveys have shown the typical voter can't name their two US Senators and US Rep. let alone their Michigan State Rep and Senator. No one should buy the narrative of pent up demand for this type of reform. Just isn't so and it is just being pushed by out of power political interests to the public, as a means to put it to stick one's finger in the eye of in-power politicians. (A popular pastime, like term limits, part time Leg., pay cuts etc etc.) If you are honest I'm sure you'd admit this is why and where your volunteers and financing are/is coming from. If this was just about drawing simple unbiased lines on a map (there are already a ton of them available to use) so what's purpose of having the commission considering member's party affiliation, non-affiliation (laughable liars!) and all the consultants and experts to create even more? Dis/un-interested parties drawing the lines on the existing boundaries and let the chips fall and you'd be believable. It seems very conceivable that what is advertised is not the objective and we're just trading politicians for different party operatives.

This is what democracy looks like!!! Glad to have signed and supported this critical effort! Let's end gerrymandering here in michigan !

If this ballot proposal is not approved for the Nov. election, our democracy is in serious jeopardy.

This is a ludicrous claim, 'gerrymandering' has been a practice in American elections for over 200 years and by all accounts America has prospered and expanded the liberty to all and it is the longest surviving government in the world.

The reality is that both Parties have used 'gerrymandering' and for the claims about protecting their power both Parties have lost power in spite of using 'gerrymandering'. As best I can tell there has been an ebb and flow of Party control through out Michigan's history, best shown by how the state wide offices have change Party, so voters [in the confines of the voting booth] vote their will not that of a particular Party.

If anything this is a civil way to protest people disappointment with the Michigan voters choice in the last election. I still waiting to hear from a proponent of change to describe an instance of irreparable harm or permanently missed opportunity for due to 'gerrymandering.'
At best it is one more way to fritter away taxpayer dollars to feed the ego over current political choices.

All districts need to be rectangular (except for the lake shore of course) for a start.