LANSING –  Democratic presidential hopeful Bernie Sanders says his Medicare for All proposal would cut auto insurance rates in Michigan that are some of the nation’s highest and guarantee “necessary medical care” for crash victims.

His campaign made the claim last month in an unsolicited text message to Michigan Democratic voters, prompting vigorous debate on social media.

In truth, it’s hard to say for sure, since several reforms are in the works that will also change Michigan’s auto rates, as Bridge Magazine’s Fact Squad found when speaking to experts. 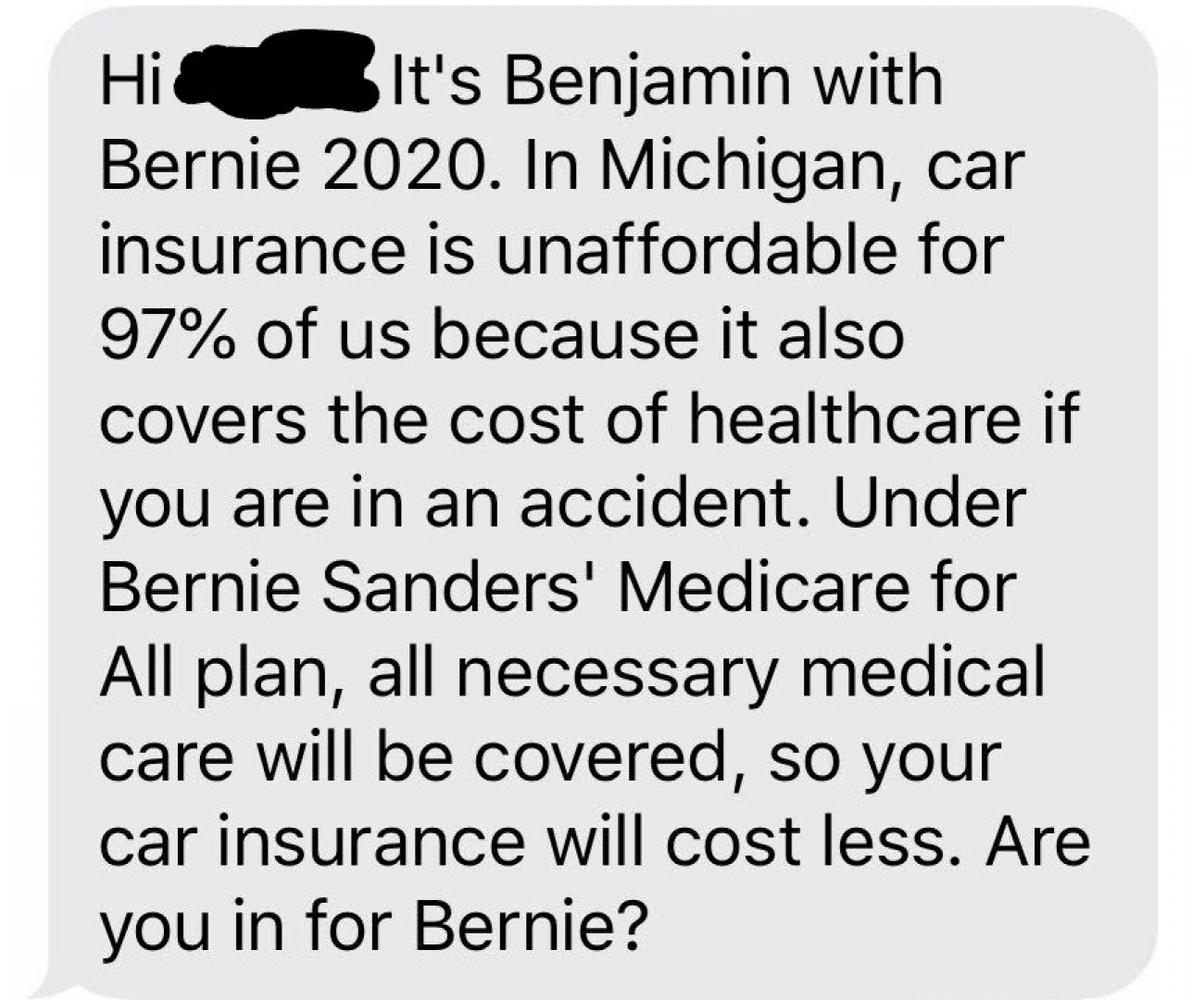 “In Michigan, car insurance is unaffordable for 97% of us because it also covers the cost of healthcare if you are in an accident,. Under Bernie Sanders’ Medicare for All plan, all necessary medical care will be covered, so your car insurance will cost less. Are you in for Bernie?”

Michigan car insurance rates are expensive, but they’re due to change when reforms take effect July 1.

Rates in 97 percent of the state’s ZIP codes currently meet a federal definition for unaffordability, according to a 2019 study by the University of Michigan. That’s not quite the same as saying rates are unaffordable for 97 percent of all residents.

Beginning this summer, Michigan drivers can opt out of the most expensive part of coverage, personal injury protection, if they already have health insurance that will cover injuries sustained in a car crash.

That option will be available to seniors on Medicare or those with health insurance that "does not exclude or limit coverage related to motor vehicle accidents" and has a deductible of less than $6,000 per person.  Sanders’ Medicare for All proposal, which would require new taxes to fund, appears to qualify. But it's also possible legislators would have to change state law to allow it.

Michigan Republicans who pushed the state reform say opting out would save drivers an average of $1,200 a year and could be even higher in cities like Detroit with astronomical rates. Critics counter those savings are not guaranteed because the new law will also increase the amount of liability coverage drivers must buy.

“We simply don’t know how the premiums will shake out,” Tricia Kinley, executive director of the Insurance Alliance of Michigan, told the Detroit Free Press last year.

The Coalition Protecting Auto No-Fault, which fought the legislative changes in Michigan, warns that drivers who opt out of personal injury protection will lose some benefits.

Medicare for All legislation introduced by Sanders “guarantees emergency services, rehabilitative services and devices, home-and community-based services and assistive technologies to all who need them including home modifications for wheelchairs, without asset or income restrictions,” said Kolby Lee, a regional press secretary with the Sanders campaign.

“If someone is in an accident, they will be guaranteed the health care they need.”

Some car insurance savings are possible under Medicare for All, but it’s too soon to know what would happen with the Michigan market and rates for Sanders to make the claim with much confidence.