How much money Michigan would lose under Graham-Cassidy

Without hearings or meaningful Congressional debate on the latest bill to replace Obamacare, healthcare organizations are rushing to produce estimates on how much each state stands to gain or lose should Graham-Cassidy become law. Michigan, they agree, will lose billions in federal dollars.

Michigan would lose billions in federal health care dollars under a bill that would repeal and replace the Affordable Care Act that is expected to be voted on this week in the U.S. Senate.

Just how many billions depends on which study you want to believe.

Most Republicans in the Senate support the Graham-Cassidy bill, named for two of its sponsors, arguing that the ACA (commonly called Obamacare) is failing and causing insurance premiums to skyrocket. Backers say giving control to the states will provide the kind of innovation that Washington can’t provide.

Democrats oppose the bill because millions of people are estimated to lose health insurance coverage under the proposal. Critics also note that the repeal law would allow states to back out of important ACA regulations, such as the requirement that insurers provide coverage for preexisting conditions without charging more.

Republicans are pushing to vote on the bill before the end of September, because after that, parliamentary rules would require 60 votes in the Senate to pass the bill, instead of the 51 needed in September (or a 50-50 tie broken by Vice President Mike Pence).

Michigan would lose money because it accepted federal dollars to expand its Medicaid coverage to more families; that expansion would be ended under the Graham-Cassidy bill.

Four organizations have released reports estimating how individual states would fare under the proposed reform. None offered good financial news for Michigan.

Avalere Health, a healthcare consulting group, estimated that Michigan would lose $8 billion in federal funding by 2026. 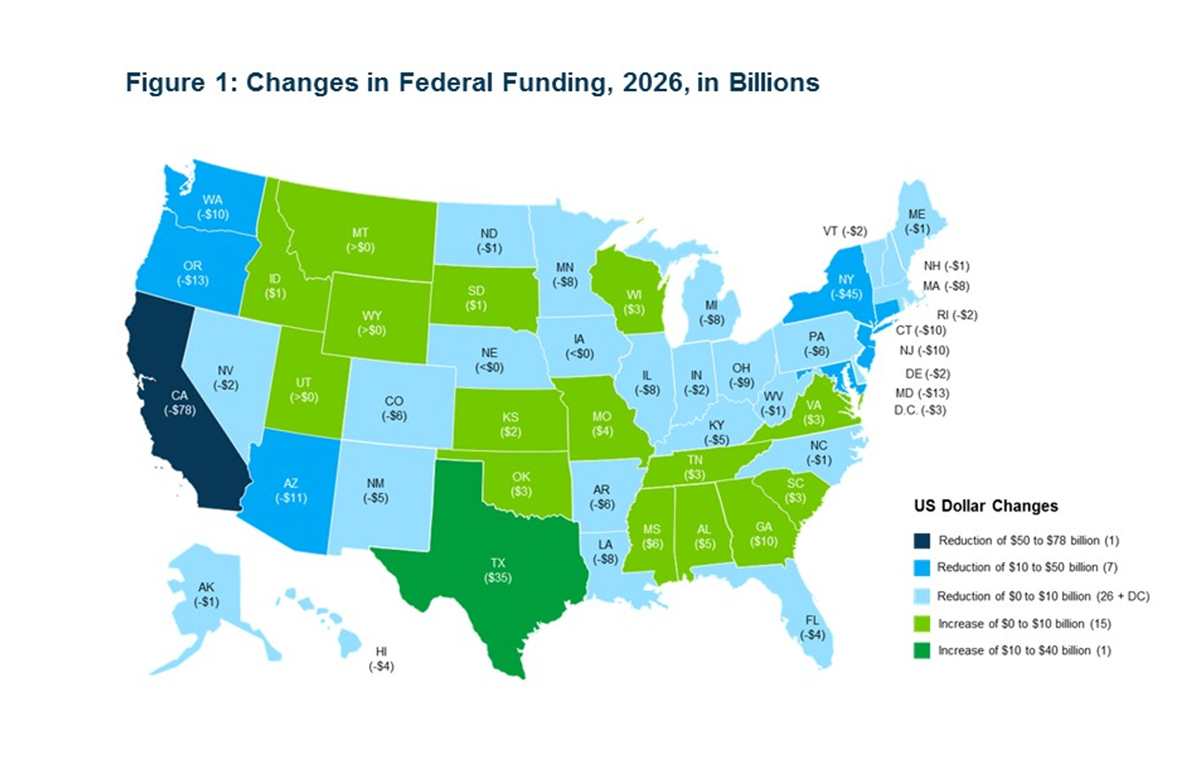 Avalere also estimated that Michigan would lose $140 billion by 2036. 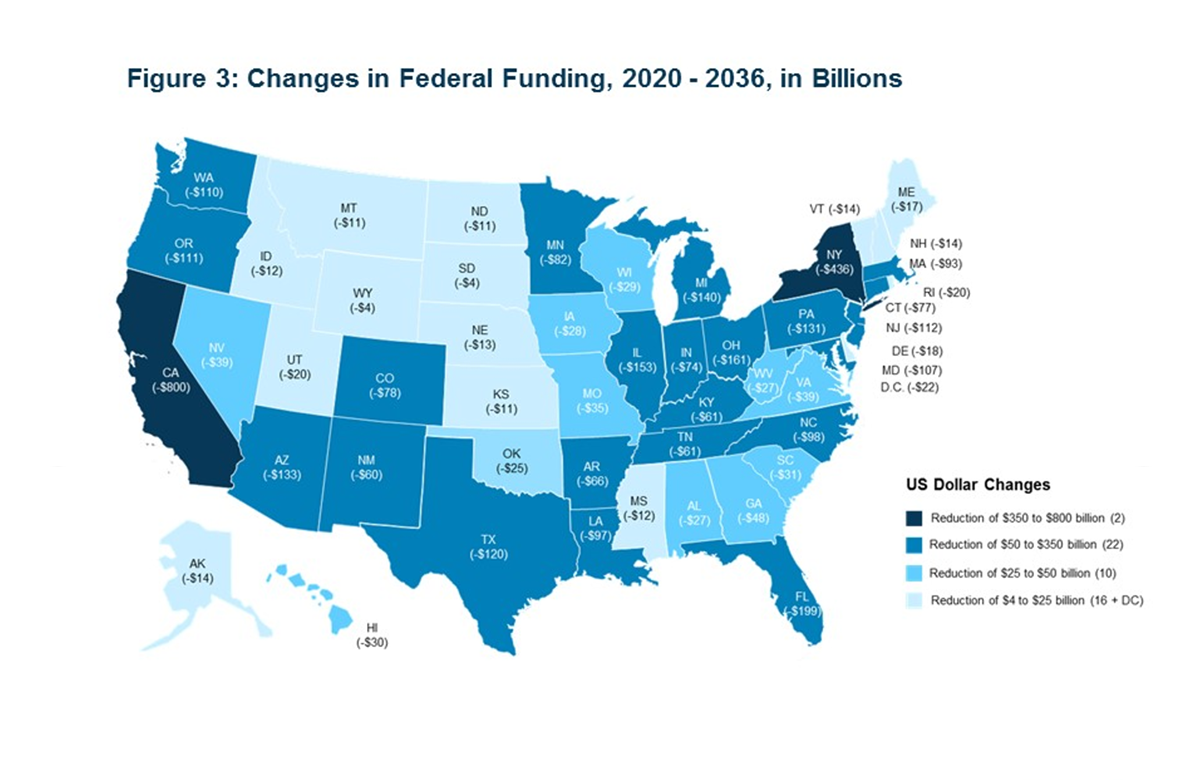 The Center of Budget and Policy Priorities pegged Michigan’s loss at $3 billion.

And the Kaiser Family Foundation split the difference, with an estimated loss of $4.9 billion in federal health funding for Michigan by 2026.

“This would be a significant loss of funding for Michigan,” said Marianne Udow-Phillips, executive director of the Center for Healthcare Research and Transformation at the University of Michigan.

Under the proposed reform, Medicaid funding would be given to states in block grants that shrink over the years. States would have flexibility about how that money is spent.

“Even though some at state level like the concept of a block grant because they like the flexibility, they have flexibility with less money, and it effectively pits different groups against each other,” Udow-Phillips said. “(State) legislatures would have to decide which groups are most worthy” of health care financial assistance.

Any way the charts could be made easier to read? Even with my glasses on the print is too small to read. Thanks!

No outright prohibition of the individual mandate.

No outright prohibition of "essential" benefits.

Most of the Obamacare taxes are left untouched (funny, how that detail always gets "overlooked").

Continued transfer of wealth from one class of Americans to another.

And who can forget Washington tradition of "bribes" snuck into the bill to assure the votes of key legislators?

Do the republicans even know what the word "REPEAL" means?

The big problem with this thinking is that it assumes all trends will continue ad infinitum except for these meanie Republicans. They won't and can't unless you believe that healthcare can and will eventually make up 99% of our economy and all Government budgets without any repercussions. The real problem is when economic reality can no longer be avoided and is forced down on us. Then the real whining (screaming) will begin.

These are not meanie republicans, they are just really ignorant people on the payroll of special interests that are bankrupting the country. The rest of the developed world have health care systems that work - lower cost and higher quality - because government policy made it so. Our so called self regulating free market isn't. Republicans refuse to accept reality and are hanging on to the belief that in an unregulated environment individuals will make purely rational decisions. Individuals decide - for themselves and no one else unless policy points them in the direction of the common good.

Chuck, First off the US health care system is far from free market, aside from the fact that more than half the dollars spent are public (yes single payer!), the vast bulk of the remaining is by heavily regulated third party pay (insurance companies) schemes. Or reimbursed care and socialized across the system. No way can you claim our system is free market. Interestingly the few areas of individual pay, plastics and laser eye surgery have seen even cost reductions over time! Second, Americans are different we're not Swiss, Brits, Canadians or Singaporeans, saying that what works there will work here .... is a big stretch to say the least. And let me know how giving Doctors the 50% -75% pay cut they'll be getting goes as in other public health systems. Should do wonders for our shortages! And while you're at it keep in mind the current system has 7% of the worlds population (US!!) financing 70% the worlds medical research and development, not that I like it but still a result of our system. Our system needs drastic reform but not Bernie's Medicare for all.

Medicaid expansion was a socialist push toward government healthcare, and it is unaffordable. The states who opted in were seduced by the federal largesse with OUR money and borrowed money.