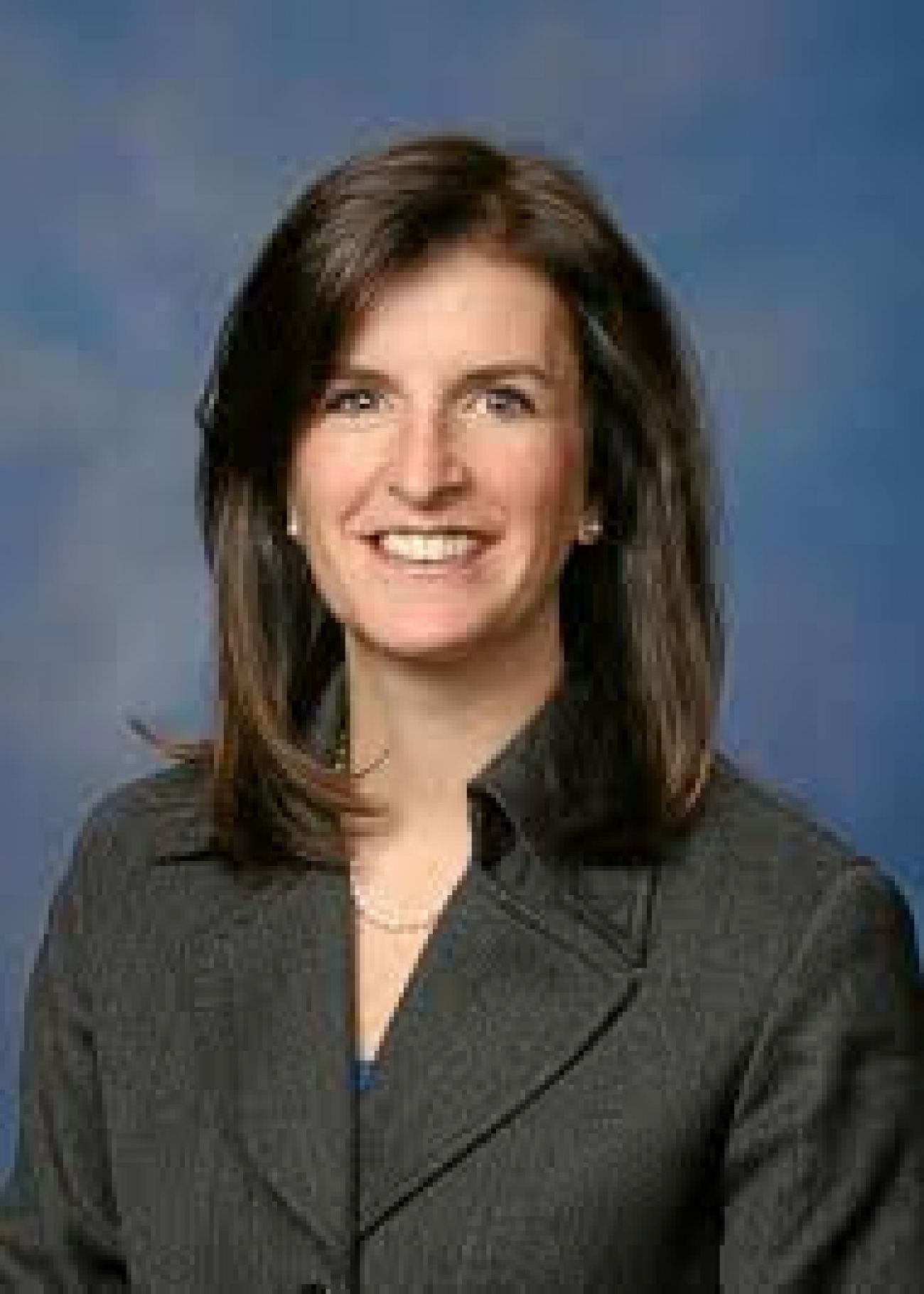 Maps are a powerful tool in war and peace. And in politics? Essential.

For the past two decades,  the GOP has been the official map maker of Michigan legislative districts. They’ve made the most of their opportunities, drawing legislative maps that helped preserve majorities in the state House and Senate and within the state’s congressional delegation, using strokes large and small, according to a Bridge Magazine analysis of precinct-level census and voting data.

Among Bridge’s findings: New boundaries after the 2010 U.S. Census were drawn to give Republicans an edge in: four additional seats in the 110-member state House; one additional seat in the 38-member state Senate, and keeping a secure 9-5 advantage in Congress. Perhaps more importantly, the redistricting strengthened GOP positions in already friendly Republican districts across the state.

In 2014, the GOP leveraged the redrawn districts to hit all its post-2010 election goals, despite getting just 50 percent of state Senate votes, 48.5 percent of all state House votes and 47.5 percent of all congressional votes.

How did they do it?

Using detailed data powered by computer software, Republicans expanded some districts, contracted others and merged some incumbent Democrats into single districts. They pushed Democratic-leaning precincts into secure Democratic areas, which created overwhelmingly Democratic districts while reducing the total count of Michigan districts where Democrats had an advantage.

Lisa Brown could be the poster child for redistricting. Now the clerk/register of deeds for Oakland County, she was the Democratic representative of the 39th district in the central part of the county, which in 2010 covered Commerce and West Bloomfield townships.

Brown won her seat in 2008 and again in 2010 and said she was the first and only Democrat to represent that part of the county. It wasn’t easy: In 2010, she won by fewer than 100 votes in a district that gave Republican Gov. Rick Snyder 63 percent of the vote that year.

Her victory didn’t go over well with Republicans, she said.

“All I ever heard was, ‘We want our seat back’,” said Brown.

Maps drawn after 2010 put her West Bloomfield home in another district: The heavily Republican 40th District to the east. It wasn’t unprecedented: Other incumbent Democrats also were drawn out of their own districts in 2011, as had happened in 2001 when redistricting was also under Republican control.

The new GOP legislative boundaries drawn in 2011 cut out eastern West Bloomfield, which had nearly 1,800 more Democrats (including Brown) than Republicans. And added Wixom, which had 1,100 more Republican voters than Democrats.

The GOP won the 39th District seat back in 2012 ‒ Republican Klint Kesto captured 53.2 percent to 46.8 percent for Democrat Pam Jackson. Brown instead opted to run for county office.

“It was very personal, it was very targeted,” Brown said.

Rules made to be broken

Every 10 years, following the U.S. Census, states, counties and municipalities have to redraw political boundaries to balance population. In Michigan, the state party in power controls the process, guided by a handful of rules, or best practices:

Rules, of course, are meant to be broken. 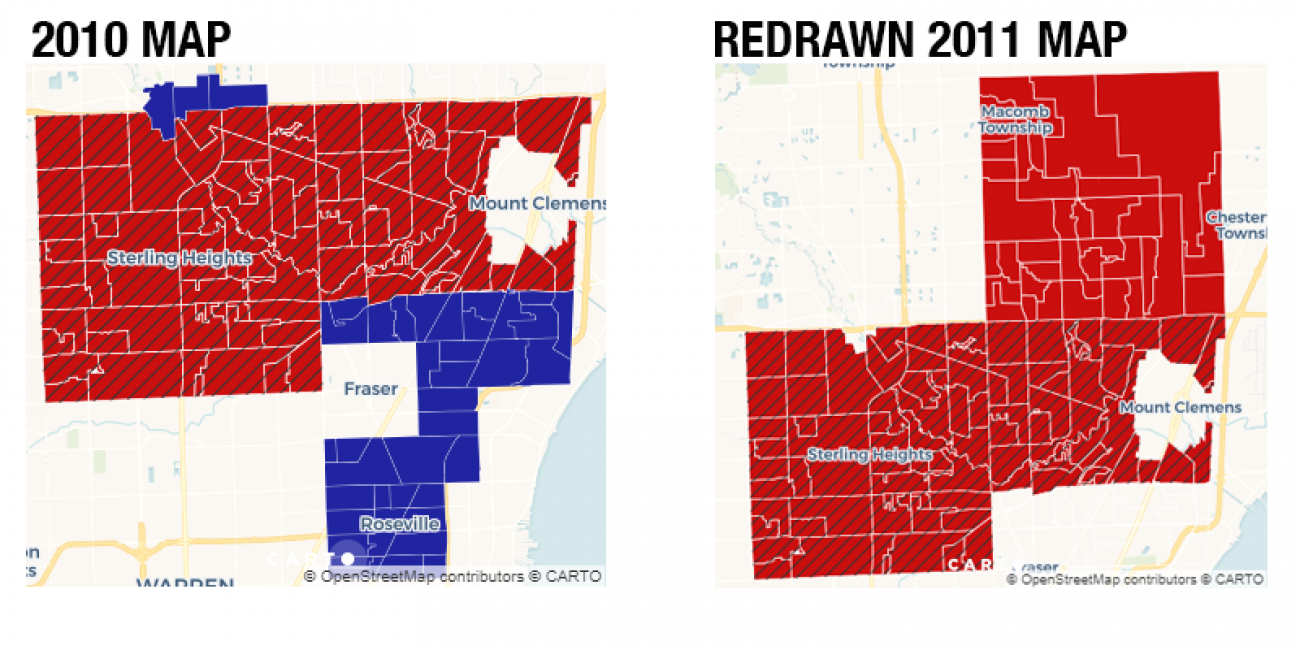 Armed with the ability to make new maps in 2011, the GOP made Rocca’s seat  safer and the district went from political “toss up” to solidly Republican. The new map split Clinton Township into two parts, with Rocca losing the more heavily Democratic portion.

Making Rocca’s seat safer meant moving some Democrats to other districts. Most were added to the 9th district to the south, represented by Democrat Steve Bieda.

To keep the population even, Rocca’s district included the heavily Republican Macomb Township.

The result: Comfortable wins for both Rocca and Bieda in 2014, with each receiving more than 60 percent of the vote in new districts that cut across municipal lines (a supposed no-no of redistricting).

If Michigan Democrats were in control

It’s easy to imagine that if Democrats had been in charge they too would have drawn districts to partisan advantage. After all, Democrat-drawn maps were adopted by the Michigan Supreme Court (a redistricting commission couldn’t agree) following the 1960 and 1970 Census counts; those maps heavily favored Democrats.

Republicans rearranged the county in 2011 into three districts that gave the GOP two safe seats. Had Democrats been in charge, they could pretty easily change it to give one safe GOP seat and two toss ups. 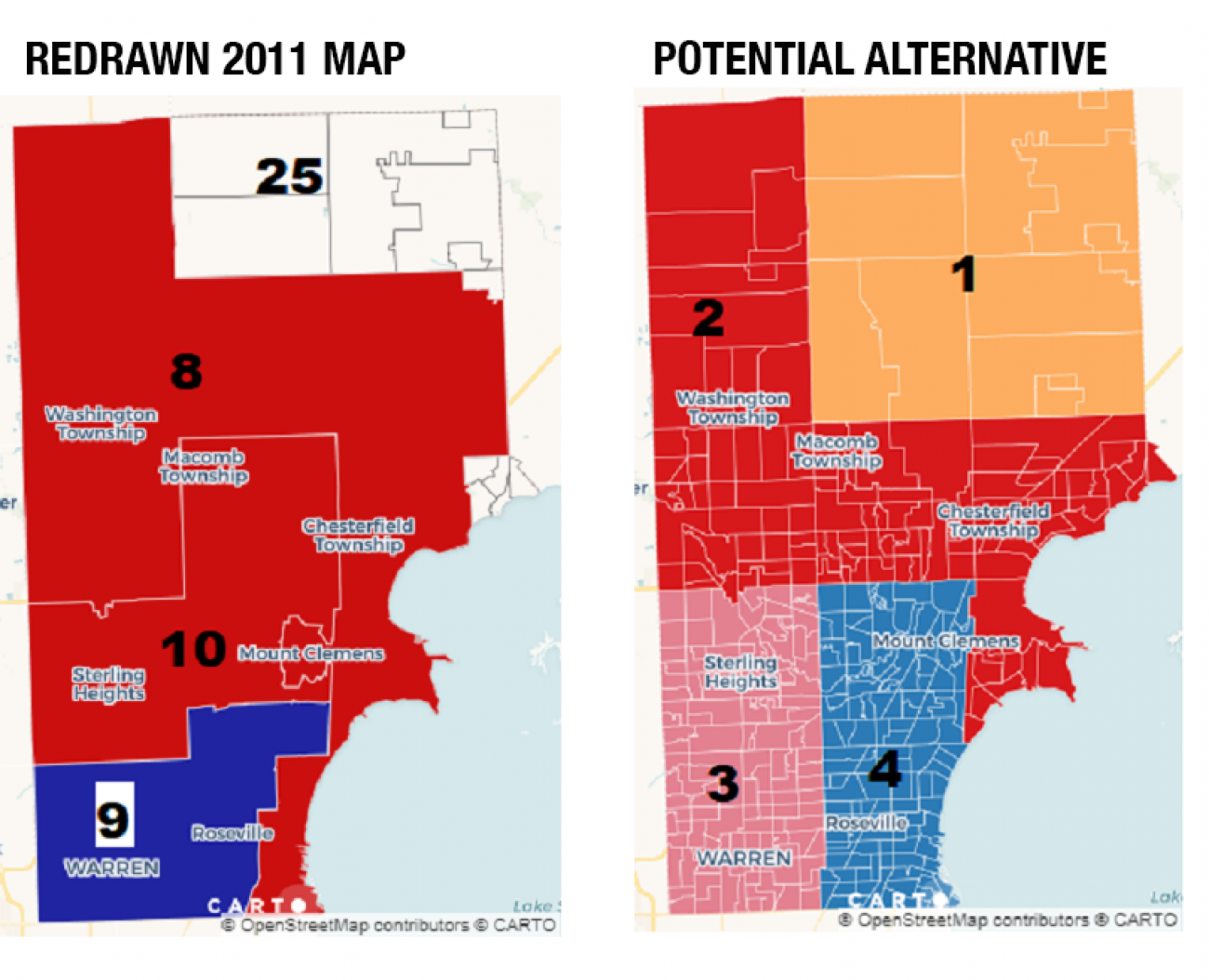 Combine Warren, Center Line and Sterling Heights in one district. Pack the Democratic-heavy communities of Eastpointe, Roseville, Mount Clemens and Clinton Township into another. Pool most of the GOP-leaning townships and cities in the north, send a few others into districts in other counties and, voila, tables turned.

When a loss is a gain

Those who deny gerrymandering afflicts Michigan point to 2012. That’s when Republicans actually lost four House seats, just one year after adopting political districts that supposedly gave them an edge.

Look closer, though, and it’s apparent Republicans actually could have suffered far greater losses, even losing control of the House had it not been for newly drawn 2011  maps.

Bridge analyzed voting records and the maps pushed by Republicans in 2011 and found that Republicans went into the 2012 election with distinct advantages in 67 seats (like the redrawn 39th that Lisa Brown held), not just 63 they held.

Had the districts not changed to give Republicans wiggle room, they may have lost as many as eight seats, according to the Bridge analysis.

So redistricting gave Republicans a big cushion to withstand a wave of Democratic voters in 2012, allowing them to win 54 percent of House seats despite receiving less than half of the votes.

GOP mapmakers also tried to create a potential Republican House district in Grand Rapids. In the 2010 election, both of the city’s House seats had gone Democratic.

But the redrawn seats split the population differently: the central city was packed into the redrawn 75th district and the 76th circled it from northwest to the southeast like half a donut.

That was the district that Democratic State Rep. Roy Schmidt lived in. Just prior to the 2012 election, however, Schmidt infamously switched parties, sparking an outcry among Democrats, who hadn’t put up a primary challenger and thus found themselves without a candidate in November.

Democratic complaints prompted a grand jury investigation.  Schmidt avoided prosecution, but not the wrath of Democrats. Winnie Brinks, a Democrat, beat him as a write-in candidate –  by over 21,000 votes. Brinks still holds the seat. 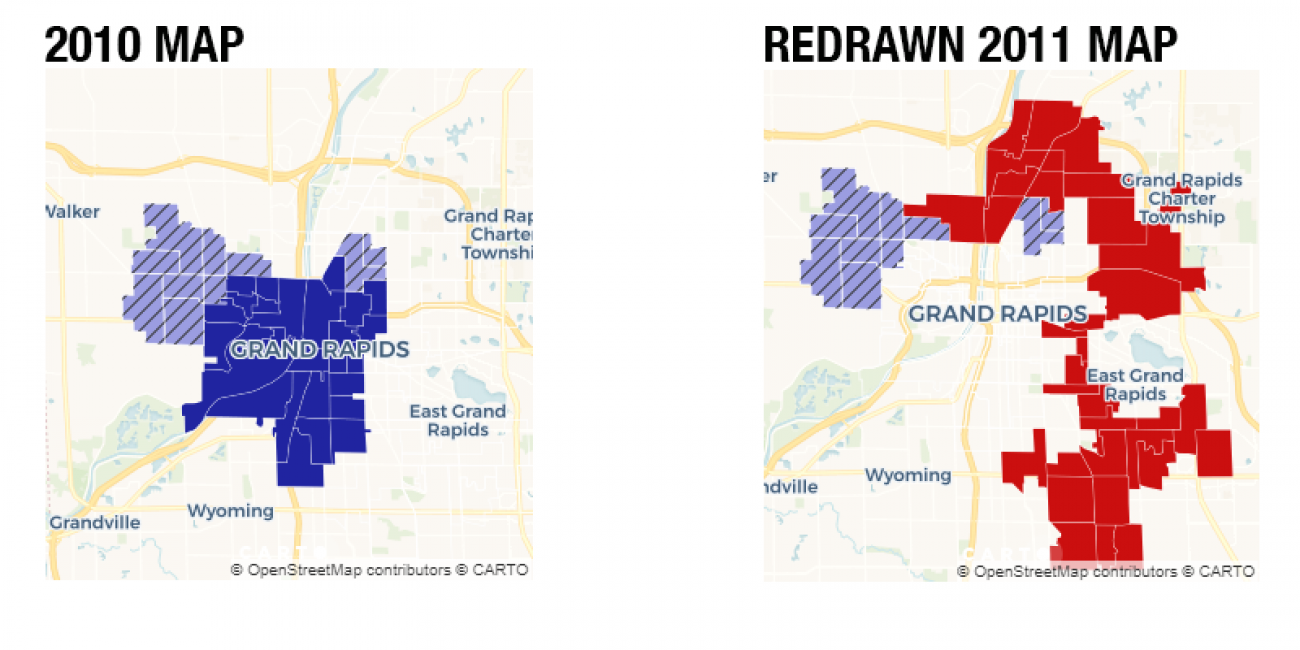