White vs. black. Northern vs. southern. Rural vs. urban. Republican vs. Democrat.

The divisions are being exposed as Michigan lawmakers debate a bill that would require Medicaid recipients to work 29 hours a week.

That’s sparked racial accusations because the bill would exempt residents who live in counties with unemployment rates of 8.5 percent or higher. Residents of cities with similar jobless rates, however, wouldn’t be exempt.

Here’s a look at maps that shape the debate. First, the 17 largely rural, largely white counties that would be exempted. Click on a county to see the unemployment rate and demographics.

But there are six cities, mostly African-American, that also have high unemployment rates. Those areas aren’t being exempted because they are surrounded by counties with lower jobless rates. Click the cities to see their unemployment rates and demographics.

Some critics say the exemptions would punish urban poor folks and favor rural ones. The exempted counties, for instance, have a population of roughly half of all of Detroit. 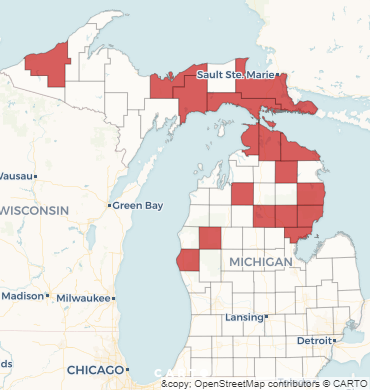 Would not be exempt 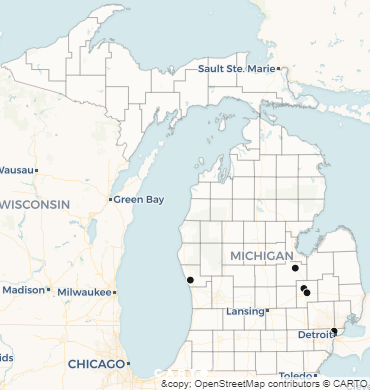 This governor likes to describe Michigan as the "comeback state" as if kissing the ground after crossing a finish line when in fact the state is still 250,000 jobs short of regaining its pre-recession employment peak. The economic recovery has been mottled and uneven across the state. A few counties and communities see success while many continue to struggle as if the recession never abated despite the governor's promise during his first State of the State address to prioritize urban revival. All revitalization has meant is take over and pressure applied to cities. Detroit far and away tops the country losing 160,000 black or African-American population since 2009, nearly a quarter and disproportionately women, according to the Census Bureau. Flint lost one in eight black women. They are moving out of state and moving to suburbs like Warren, Farmington Hills and Westland in a great migration other countries might describe as ethnic cleansing.

There is no doubt that this legislature (legislative majority) is biased (racist & partisan) and given today’s political culture believe they have a pass to do what they want. Term limits have been extremely damaging, allowing people with no knowledge or expertise to be funded into office by special interests and then controlled by the lobbyists who influence/write so much of the damaging legislation. People need to wake up and take back representative democracy while they still have the freedom to do so.

Excellent analysis! It is hard to argue with data, but I am sure the legislature will try. If this is not intentional, then the legislature is not nearly as bright as we need them to be.

I apologize. Use of the term "bright" was unfair. Perhaps a better word is "informed".

You were right the first time

I'm failing to see the overt racism here. If there aren't any jobs in the entire county, what's a person to do?

Hint: there may be a link between voting Democrat for generations and your city being broke, desperately mismanaged and utterly bereft of opportunities.

Why, yes, given the refusal of white communities like Livonia to allow buses from Detroit to reach the jobs in that community, I would say that it's "impossible" for the urban poor of the city to get to a job in that neighboring community.
And by the way, cities like Grand Rapids and Ann Arbor, which are among the most prosperous in our state, are run by Democrats. And the counties in red in this report...well, those are mostly run by Republicans. The bigger point: We need a strategy that helps everyone who is truly able to get a good paying job. This proposal does nothing to assist that endeavor. And that need is equally important in rural northern Michigan counties AND urban communities.

David Waymire says: "Why, yes, given the refusal of white communities like Livonia to allow buses from Detroit to reach the jobs in that community, I would say that it's "impossible" for the urban poor of the city to get to a job in that neighboring community."

This is total leftist bs. SMART made the decision not to provide bus service in Livonia.

Livonia opted out of SMART, and I was a person who voted to opt out. We replaced SMART with our own transit service. And I'd do it again with RTA in a heartbeat.

Livonia did not refuse to allow buses from Detroit into Livonia. SMART is totally responsible for this decision.

But there is no reason whatsoever, that Livonia homeowners should be obligated to pay property taxes to provide bus service to and from Detroit, or anywhere else.

Bus users should provide the entire cost of operation of the buses they ride, via the fare box. And with vouchers for those that can't afford the fares. Or let the businesses that employ the bus users pay the fares. Not homeowners.

And yet MY tax dollars fund roads in the poor rural districts. Poor is poor and carving out geographic exceptions is at best patronage and at worst outright racist.

very simple solution : raise the minums wages to $ 20 an hour.
so people can buy cars and pay gasoline $ 3.00 plus babysitter.$ 10 an hour>
what is Michigan Works doing about "Jobs" and in each city, finding Jobs.

Dear Blatant Some Guy. Perchance you are white and republican but don't have a prejudicial bone in your Nose. Right.

Setting aside the absurbidity and it’s sure-fire formula in how to create a hornets nest, has any of these bill sponsors and supporters figured out a way to administer these new regulations? As a former DHS/FIA(whatever it is called these days) worker, in this already overwhelmed and under staffed agency, I doubt they have. This is a political stunt. And a costly one that sadly cost all of us taxpayers a lot of money that could be spent to really help those in need.

What is the motivation behind this bill? Does it generate some savings to Mediaid? How will this be administrated? What is the cost of the program vs savings? Is there a net economic benefit? Interesting that it requires 29 hours if work and not 30. I believe employers Are required to pay for health insurance at 30 hours.
Articles like this are good, but it would be nice to see more analysis on the merits of the bill instead of articles design to pit one demographic group against another. We have enough of that in this country lately. Let’s discuss the merits of the bill.

29-30 hours.for healthcare cost.
so you/me get a job.who is making sure I will not be losing my "benefits" or when calling in for unemployment pay.after i lose my "JOB" >
marvin will not cut me off from my benefits .unempoyment pay or worse then that ..send me to court ..for working and I end up with a court fine of $ 9000 .like it happen in the past.when computers and lawyers didnot correct the process!

The state of Michigan has almost 10 million people. You are distorting the facts to suit the agenda your benefactors charged you with.

Thanks for the data and the graphics.
PS. Let me say the recaptca I'm not a robot thingie was certainly frustrating.

In 17 countries of the world the citizin get a basic allowance for housing and food.THERE to keep even when they have a JOB..since times are slow and some jobs are temporary
Canada ,finland, swiss and in africa the State of Nambia.