LANSING — Michigan U.S. Rep. Elissa Slotkin is trying to distance herself from the kind of flattering news coverage most politicians would kill for in an election year.

The Holly Democrat “Has a Bill to Set-Up Testing Programs That Can Get Economy Running Again,” declares the headline on one Courier Newsroom article that plucks statements from a Slotkin news release and includes no opposing viewpoints.

“Rep. Slotkin Calls For Michiganders to Work Together as State Starts to Reopen,” trumpets another Courier article.

Courier, created and primarily funded by a deep-pocketed liberal group that does not disclose donors, has spent more than $80,000 on social media ads promoting those stories and others about Slotkin, who has championed campaign finance reform and criticized the role of dark money in elections.

Partisan news sites are nothing new, but Courier’s targeted ad campaign appears unique. Facebook data showed that Courier has pumped more than $1.7 million  in ads promoting Slotkin and other Democrats in swing districts across the country. By federal law, Courier is not required to disclose its spending or donors because it is organized as a media organization and is promoting its own coverage.

Courier, which has also launched local sites in Michigan and other battleground states, employs real journalists and has positioned itself as a progressive counter to conservative news sites like Breitbart. But critics say Courier’s ad spending blurs the lines between a newsroom and political action committee in ways that could further undermine confidence in journalism when objective truth is already under assault.

"The news media as Fourth Estate just kind of evaporates under this model," said Philip Michael Napoli, a professor specializing in media and democracy at Duke University's Sanford School of Public Policy. "It's news as a political tool: ‘Let's create an offensive here, and a defensive front there.'"

Slotkin, who began her term by voting for legislation that would expand disclosure rules for election spending and has pledged not to accept contributions from corporate PACs, had “no involvement or contact with [Courier] or any other dark money group,” said Maggie Kadifa, her re-election campaign spokesperson.

"Elissa believes that the best way to inform voters is a free and open press, and that truly independent media organizations are most effective at keeping citizens engaged," Kadifa said. "Political sites trying to imitate independent, local news organizations only confuse the public in ways that do not advance our democratic ideals.” 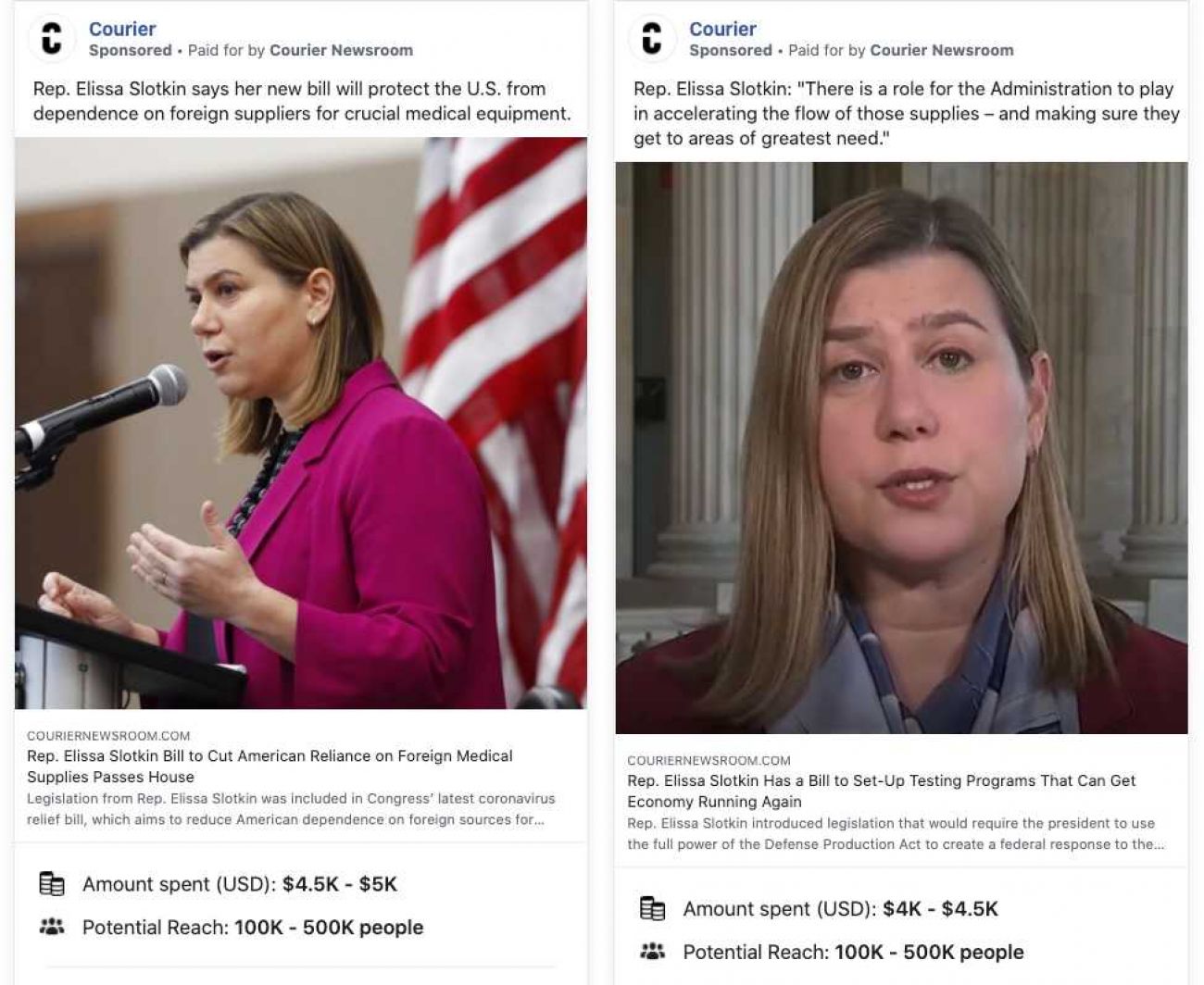 “Slotkin waited until Courier spent nearly $100,000 for her to disavow the ads and now her House Democratic colleagues who have collectively benefitted from over $1 million in ads should do the same,” Sachs said.

“This latest example of spending literally from a fake news site shows that liberal Elissa Slotkin is not the person she sold to voters in 2018,” Wagener said.

Gordon Trowbridge, senior adviser of communications for Slotkin's campaign, said it is "ironic that Congresswoman Slotkin's political opponents are criticizing her on this issue even though she has called for limits on unlimited outside campaign spending, called out partisan imitation news sites, and declined to accept corporate PAC donations — all steps they have refused to take."

"She will continue fighting to reduce the influence of money in our political process."

Courier did not respond to requests for comment from Bridge Michigan, but company leaders have defended the site's journalism elsewhere.

The newsroom pairs "original, fact-based reporting with paid content distribution, Courier is reaching Americans in their newsfeeds and is providing a powerful counter to conservative misinformation which dominates platforms like Facebook,” COO Rithesh Menon told Politico in a statement last month.

“We’re so proud of what Courier has built in its first year, and hope others in the progressive space invest in this type of digital media ecosystem — because the Right has for years.”

Courier was founded by Tara McGowan, a former director of the Super PAC Priorities USA and a digital producer for Barack Obama’s 2012 campaign. She also co-founded Acronym, a nonprofit that Courier says is a majority funder. Company officials told OpenSecrets in May they have attracted other investors, but records are not readily available to verify that claim.  Acronym does not disclose its donors.

The media company this year launched liberal news sites in several states expected to play a key role in the November election, including The ‘Gander in Michigan.

“The fact that it is owned by an organization that supports a candidate and a party, you know, that's not journalism,” Rinehart said.

The political right has long dominated the partisan news wars with sites like The Daily Caller and The Blaze that promote conservative viewpoints but do not appear to have any significant advertising presence on Facebook like Courier.

“There's been an explosion of ways that political operatives are trying to take advantage of big money-funded organizations in the election context.” said Michael Beckel, the research director of Issue One, a national nonprofit focused on campaign financial transparency. “In more recent years we've seen more and more Democratic operatives wanting to use every tool they can in order to win elections.”

Facebook records show Courier Newsroom and its state outlet are not the only source of Acronym ad spending in Michigan.

In the month leading to the August primary, Acronym and Facebook pages connected to it spent at least $438,000 ads targeting Michigan readers, according to a review by the Michigan Campaign Finance Network.

The spending gave the organization a wide reach.

According to Facebook’s own disclosures, it represented about 7 percent of political ad spending on the social media platform that month in Michigan. The ‘Gander Newsroom spent $142,294. Courier Newsroom, $14,704. Another page called Four Is Enough, funded by Pacronym, Acronym’s super PAC, spent $143,483.

About $53,000 was spent advertising United Research Group, a Facebook page that advertised a form of slanted surveys called push polls, meant to persuade voters rather than gauge their opinions. The connection with Acronym was first reported by The New York Times.

With traditional media companies battling declining readership and revenue, experts say more readers are seeking out new sites that confirm their own beliefs. Research shows partisan polarization in the use and trust of media sources has grown in recent years.

"There are plenty of people who will happily and knowingly consume hyper-partisan news," Napoli said.

Courier and other partisan sites are increasingly targeting those readers at the local level with sites that have names similar to traditional newspapers.

“Having a name that sounds like you are part of the community or part of the state that the group is active in can be a very persuasive measure,” Beckel said.

Metric Media, which has ties to GOP operatives and produces coverage that tends to highlight Republican officials, did not respond to a request for comment. Online, the company claims it is working to “fill the void in community news after years of decline in local reporting by legacy media."

But the company is opening sites in communities that are politically relevant — not simply lacking a local newspaper, said Napoli, whose research team at Duke has mapped the "location" of hundreds of hyper-partisan sites masquerading as local news.

If successful, they could steal readers from traditional news organizations and perpetuate their decline, he said. Established partisan sites like Brietbart and The Gateway Pundit now attract more than 1 million unique visitors apiece per month.

"This downward slide that the role of nonpartisan journalism pays in our overall news ecosystem and our political ecosystem is really troubling," Napoli said.

Metric Media now operates sites in every state but Illinois, where a related conservative news network already has a strong foothold in the market, according to Priyanjana Bengani, a senior research fellow at Columbia Journalism School's Tow Center for Digital Journalism.

One counterpart to Acronym’s spending in Michigan is a network of nonprofits founded by conservative activist John Tillman. Its news arm The Center Square, like The ‘Gander, boasts about editorial independence while remaining tied to related advocacy organizations. Metric Media’s sites regularly draw on reporting from The Center Square.

Tillman said the publication “does not have an ideological bent at all,” though its coverage frequently coincides with policies of the American Legislative Exchange Council, a nonprofit that drafts conservative legislation for state lawmakers.

In an interview in May, Tillman said he and the organizations connected to him work to engage everyday people in discussions on those issues, so “rank-and-file folks who are not connected to the powerful have an opportunity to have their voices heard.”

“We take a very marketing-focused approach to identifying people and giving them the kind of content and information they're looking for to help them be better informed and help them make better decisions about how they do their civic engagement,” Tillman said.

Unlike Courier or The Center Square, which employ full-time reporters, more than 95 percent of the articles published by Metric Media sites are either automated content or press release rewrites — content known as “pink slime journalism” — while only about 4 percent of stories have a human byline, she said.

Their original stories have a very evident conservative angle, and a lot of the op-eds are written by people who are either conservative members of the state Legislature or Congress... or conservative things tanks," Bengani said. Although Media Metric sites have a small presence on social media, they publish 40,000 to 50,000 stories per day combined.

Metric Media sites say they are funded by the Metric Media Foundation, a 501(c)3 nonprofit founded in August 2019. The foundation has not yet filed any tax documents, and even when it does, it will not be required to disclose donors.

"We have no view into how they're getting paid," Bengani said, “if this essentially a grifters’ organization where they're just trying to make money from ad revenue, or if there's something more to this."

Simon D. Schuster is executive director of the Michigan Campaign Finance Network, a nonprofit organization dedicated to highlighting the role of money in Michigan politics.