LANSING — Secure MI Vote, a Republican-backed petition drive aiming to tighten election regulations in Michigan, turned in more than 514,000 signatures Friday — two months after missing the deadline to qualify for the November ballot.

Supporters of the ballot initiative — including state Sen. Tom Barrett, R-Potterville, and state Rep. Matt Hall, R-Battle Creek — urged Democratic Secretary of State Jocelyn Benson’s office on Friday to nonetheless certify the signatures and present the issue to the state Legislature for adoption before the end of the year.

“We are calling on Secretary of State Jocelyn Benson not to delay but to review these swiftly and to certify these petitions so the Legislature can get back to (putting) these into law,” Hall told reporters during a press conference Friday.

That seems unlikely. Because of the missed deadline, the office is treating the petition as one intended to go on the 2024 ballot, said Tracy Wimmer, a spokesperson for the Secretary of State office.

The state’s election staff will review those signatures “when they have capacity, and when such work would not interfere with them administering two elections this year,” Wimmer said.

The ballot measure was one of nine proposals for state law that failed to meet this year’s signature submission deadline. 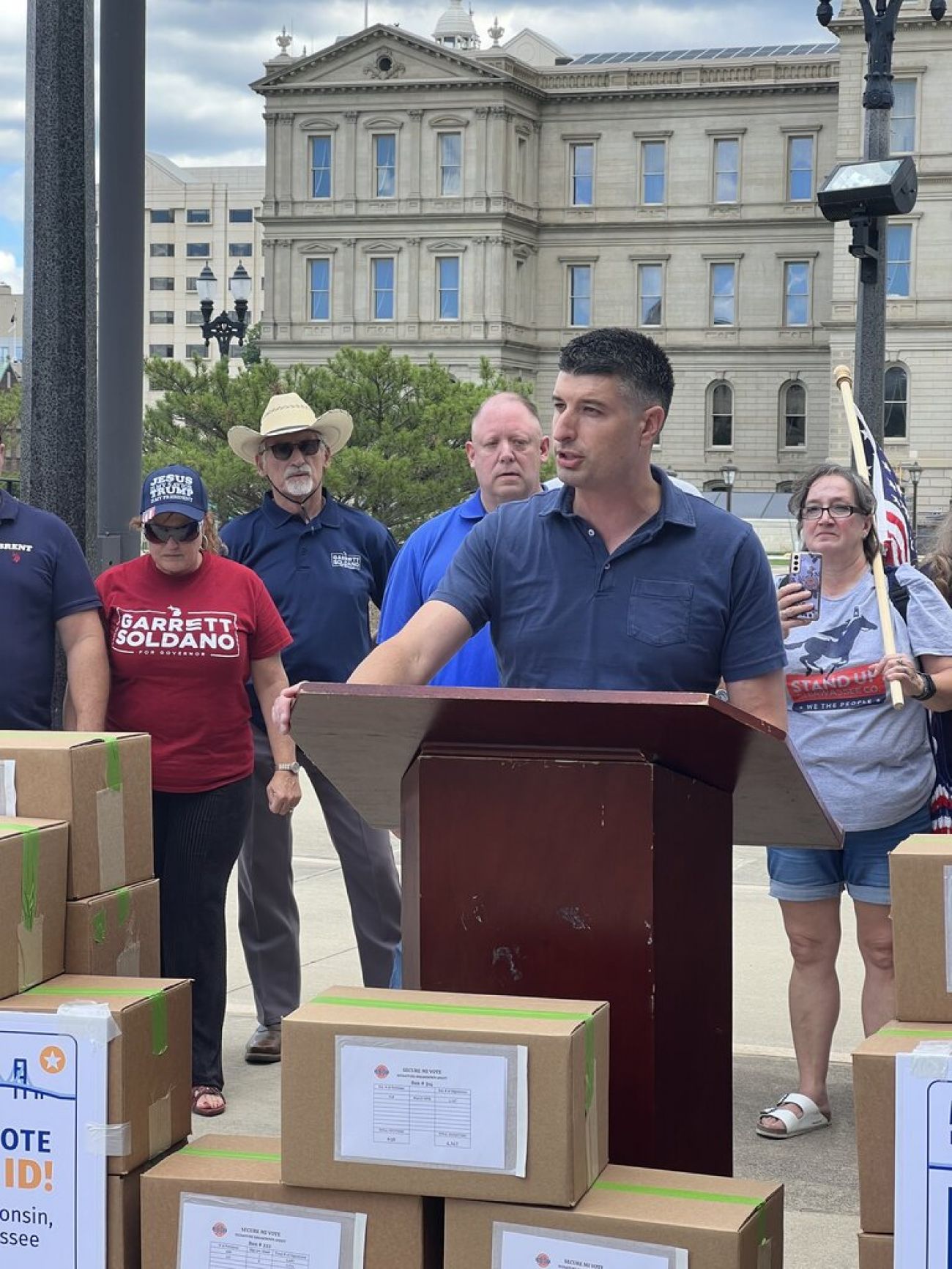 Under state law, petitioners pushing for new state laws must collect at least 340,047 signatures within 180 days by June 1 to qualify for the November ballot this year.

Once submitted, state election officials must review the signatures and certify the petitions before sending them to the state Legislature, which has 40 days to adopt the initiatives into law. If the initiative is rejected or ignored by lawmakers, the initiative would appear on the November ballot for voters to decide.

With enough signatures, Secure MI Vote would have almost certainly been adopted by the Republican-led Legislature, which has passed similar legislation that was vetoed by Democratic Gov. Gretchen Whitmer.

Roe said the campaign plans to refer those circulators to law enforcement in the coming weeks.

Litten said Friday the campaign expects signature validity challenges from opposition groups, but said he is confident the signatures will withstand any challenge.

“We are trying to restore none other than election integrity to the state of Michigan,” said Ron Armstrong, president of conservative advocacy group Stand Up Michigan, which helped collect signatures for the petition.

But opponents, mostly Democrats and voting rights groups such as Voters Not Politicians, have said the measure could make it harder to vote and erode voters’ trust in election administration.

“They are turning in signatures not to qualify for the 2022 ballot — because they have missed the deadline to do that — but to put these measures to the state Legislature to pass veto-proof legislation that will undermine our democracy,” Voters Not Politicians Executive Director Nancy Wang said in a Friday statement.

Roe said he understands that state election officials must first review a total of 1.4 million signatures submitted by two separate proposed constitutional amendments that could go to voters this year.

One would allow for nine days of early voting, while another would enshrine abortion rights into the the state constitution.

“I know (the Secretary of State has) work to do right now,” Roe said. “I understand that’s got to take precedence.”

But supporters on Friday criticized Benson for not validating signatures collected by Unlock Michigan — a successful ballot initiative that repealed a 1945 law giving Whitmer the power to issue pandemic emergency orders — for months.

The group turned in signatures in October 2020 and Benson deemed the signatures valid in April 2021.

Barrett on Friday called the months-long window an attempt to “delay things to such a degree that is designed to prevent legislative action.”

“That’s something that people should not tolerate,” he said. “That’s not just putting a thumb on the scale, that’s putting your whole body on the scale.”

If the signatures do not reach the Legislature until next year, Hall said he still believes the new class of legislators would adopt it.

“I believe we are going to grow our majority in the House and the Senate because of things like this,” Hall said, referring to the Secure MI Vote petition. “People of Michigan see that we are standing up for them for secure elections.”

Even if the state Legislature adopts the measure into law, voters could effectively nullify the law in November by approving Promote the Vote, a constitutional amendment proposal that would continue to allow registered voters to attest to their identities with an affidavit instead of a voter ID and allow nine days of early voting.

Litten told reporters Friday that Secure MI Vote will be involved in a “significant” campaign against Promote the Vote between now and the election.

The campaign has received almost $1.6 million in direct contribution and $2.9 million in goods and services since 2020, the latest campaign records show.

Of the direct contributions, $1.1 million — or almost 70 percent — came from Michigan Guardians of Democracy, a 501(c)(4) group formed in September and not required to disclose its donors. Another $50,000 came from Liberty Initiative Fund, a national nonprofit funding election-related ballot measures without having to reveal its donors.