Democrats have complained for years that the GOP-designed legislative maps put them at a disadvantage before the first yard sign is planted or candidate is picked.

In November, those advantages were clear in many districts where Republicans narrowly won, despite a surge in Democratic votes. But in others, changing demographics and political attitudes helped Republicans retain majorities in both the House and Senate that they’ve controlled for a decade.

Here are how redistricting played a role in the Nov. 6 elections that saw Republicans receive less votes than Democrats but retain a 22-16 majority in the Senate and a 58-52 majority in the House. 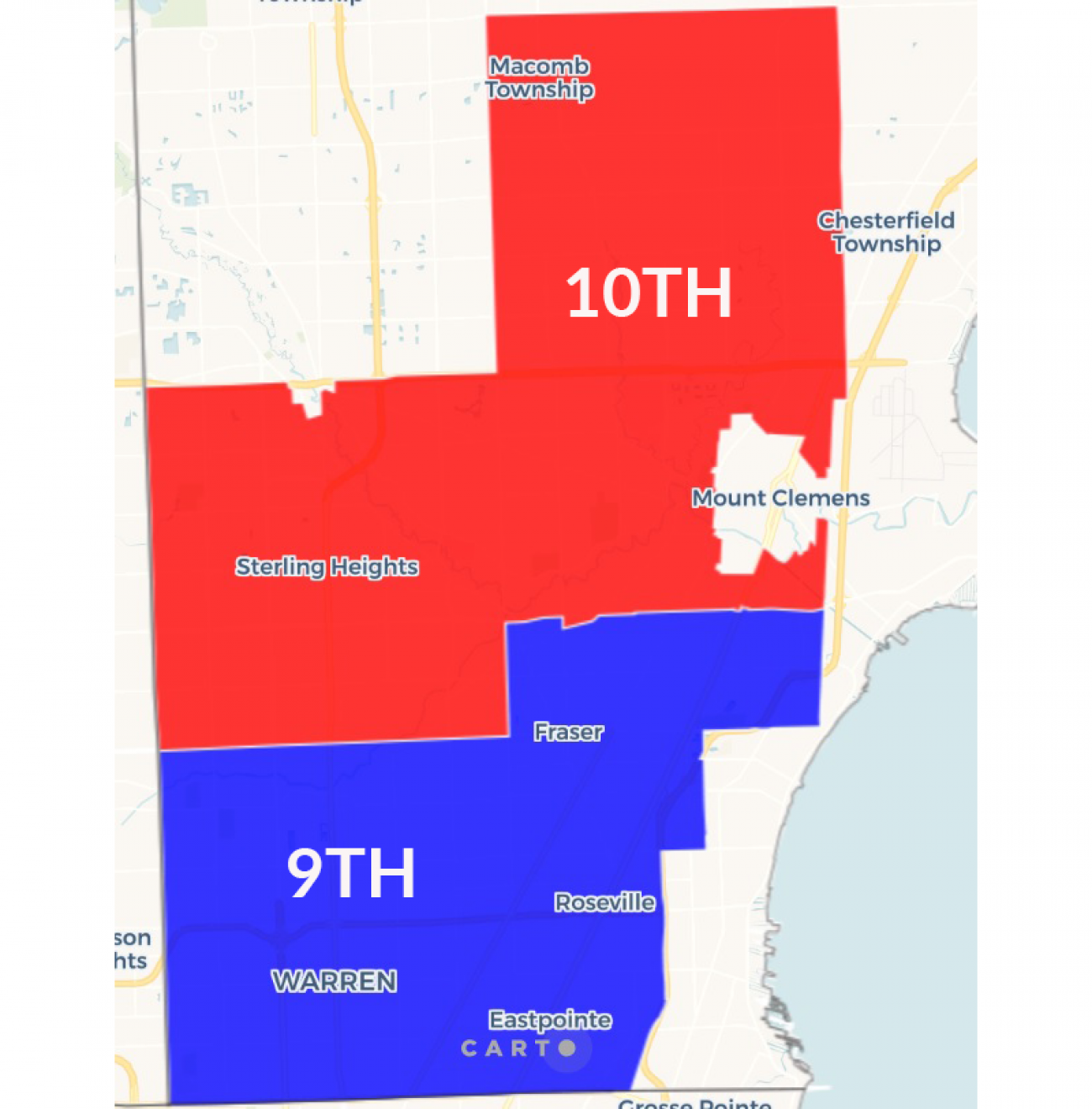 When the GOP designed the 10th Senate District, central Macomb County was carved up to lean Republican. Clinton Township was divided between two districts, a no-no according to state redistricting rules: The more Democrat-leaning precincts of the township went to the 9th District and the more Republican to the 10th.

The new 10th District became more Republican by losing Roseville, a heavily Democratic city, and picking up Macomb Township, which is heavily Republican.

Combined, the new 10th became 3 percentage points more Republican and the 9th became more Democratic, according to a Bridge Magazine analysis of the old and new maps and voting records. Mapmakers packed many Democrats into the 9th and “cracked” other Democrats, diminishing their impact, by adding Macomb Township. 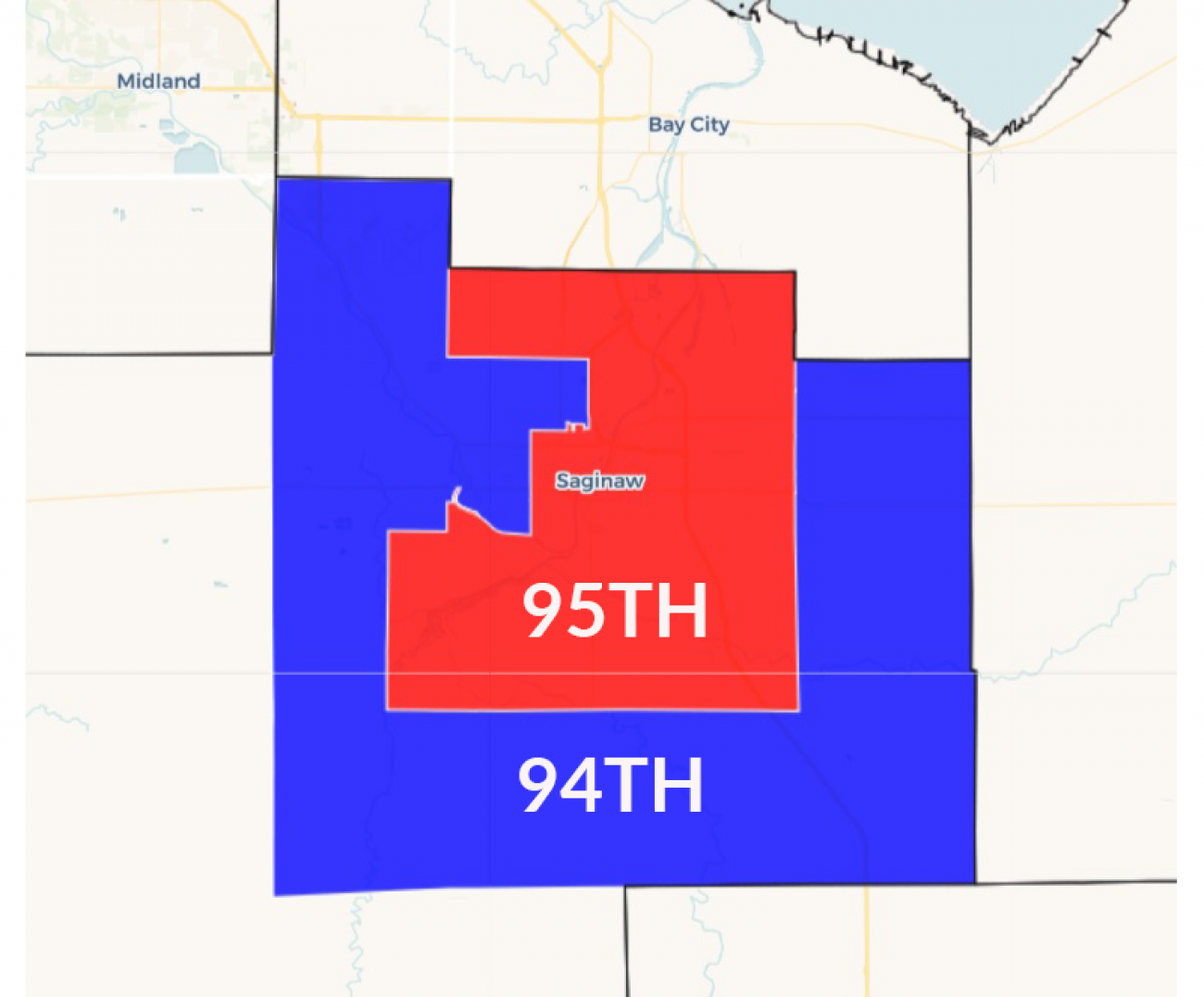 When rearranging districts in Saginaw County, GOP mapmakers agreed with Democratic state Rep. Stacy Erwin Oakes and added a rural township to her district, according to a deposition in a lawsuit challenging the GOP maps. Oakes was eyeing a run for state Senate and wanted to include James Township, according to a deposition from Dan McMaster, former director of the Michigan House Republican Campaign Committee.

The changes kept the heavily Democratic areas entirely in Oakes’ 95th District –  and preserved the 94th as a Republican stronghold. Oakes was one of only five Democrats to vote for the GOP redistricting plan.

95th District: Incumbent Democrat Vanessa Guerra won the packed district big-time, beating Dorothy Tanner by 46 percentage points and more than 11,000 votes. In every election since redistricting, Democrats have won by at least 45 points. 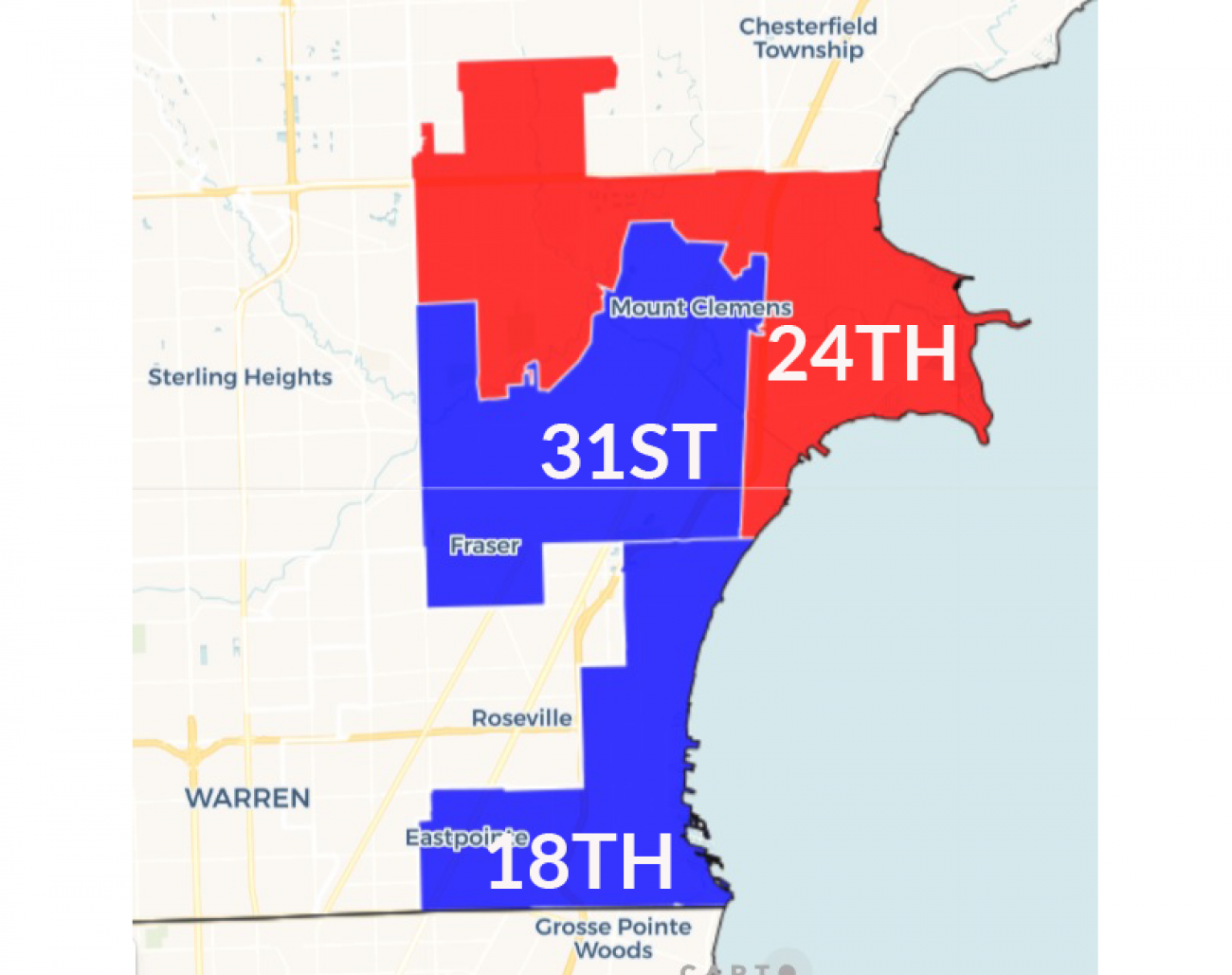 The 24th District was redesigned to shift from southern Macomb County to central and northern Macomb, where more Republicans live. In the process it went from a  50-47 Republican leaning district to a 59-39 Republican stronghold, according to a Bridge analysis of maps and voting records.

Incumbent Republican Steve Marino won the 24th handily, beating Democrat Laura Winn by 11 points, almost identical to his 2016 results and similar to the 9-point wins racked up by the GOP in 2012 and 2014.

And Democrat Kevin Hertel, an incumbent, beat Republican Kyle McKee by 25 points in the 18th, which had comprised a portion of the 24th. He had won by 27 points in 2016 and Democrats easily held seat in 2012 and 2014.

In the 31st District, incumbent Democrat William Sowerby won 60-40, over Republican Lisa Valerio-Nowc. That was a similar margin to his 2016 victory; and Democrats had won the district by more than 20 points in 2012 and 2014. 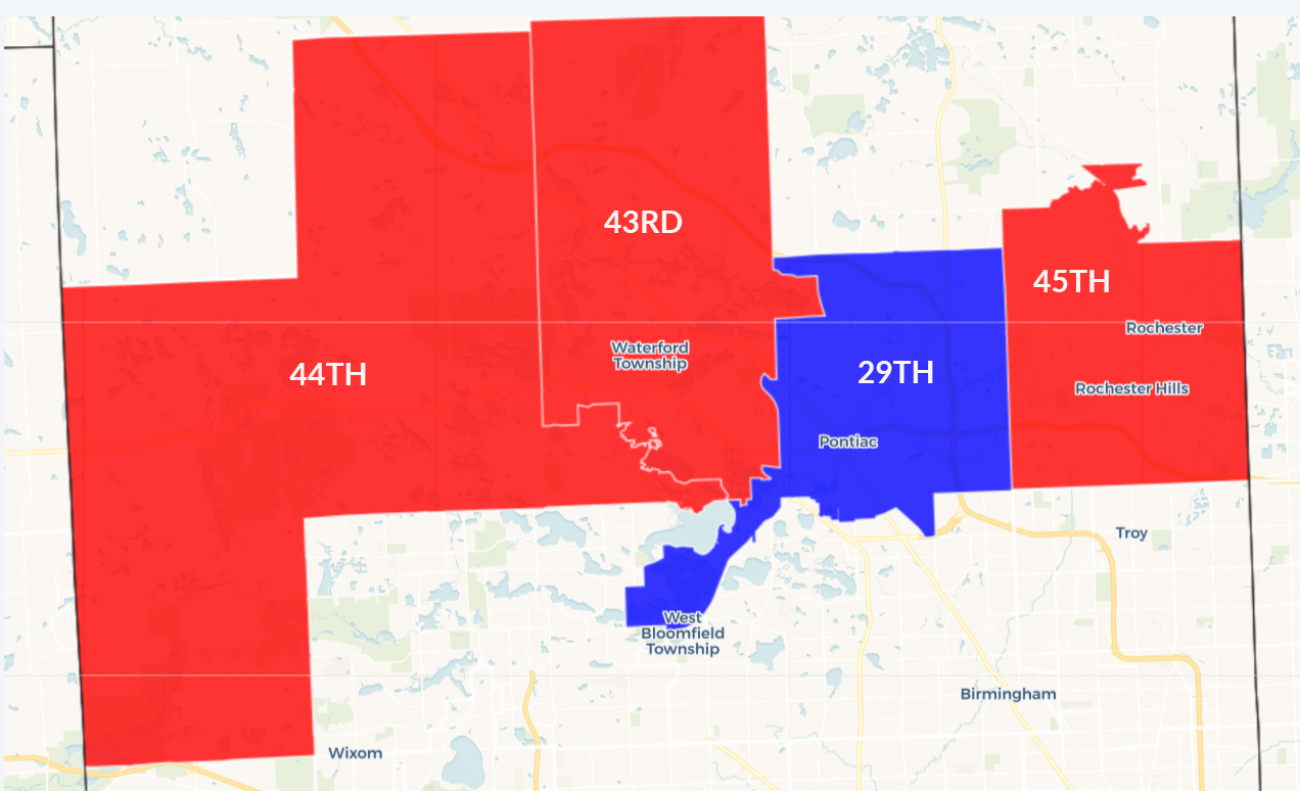 All three Republican districts here, in Oakland County, were considered partisan outliers by a University of Michigan researcher who analyzed districts statewide for the League of Women Voters in its ongoing lawsuit against Secretary of State Ruth Johnson, alleging the 2011 redistricting is unconstitutional.

After the redesign, the 43rd became more Republican while the other two remained strongly Republican –  all had Republican majorities of at least 66 percent. The neighboring 29th District, comprising mostly of Pontiac, was left largely intact as a Democratic stronghold.

Changing population meant the 45th lost Oakland Township and is comprised solely of growing Rochester and Rochester Hills; the 44th added Milford but lost Independence Township and Clarkston to the 43rd.

More importantly: None of them picked up any of the Democratic-leaning precincts of nearby Pontiac and Auburn Hills.

Oakland County, and parts of western Wayne, had the biggest swings toward Democrats as women and educated voters turned out in large numbers, flipping a number of House, Senate and Congressional districts.

But the Republican districts survived the swing.

In the 43rd, an open seat, Republican Andrea Schroeder beat Democrat Nicole Breadon 57-43 – a solid victory but a fraction of 31 points that former Rep. Jim Tedder won by in 2016 and less than the 21 point and 16 point wins in 2012 and 2014 for the Republican candidates. 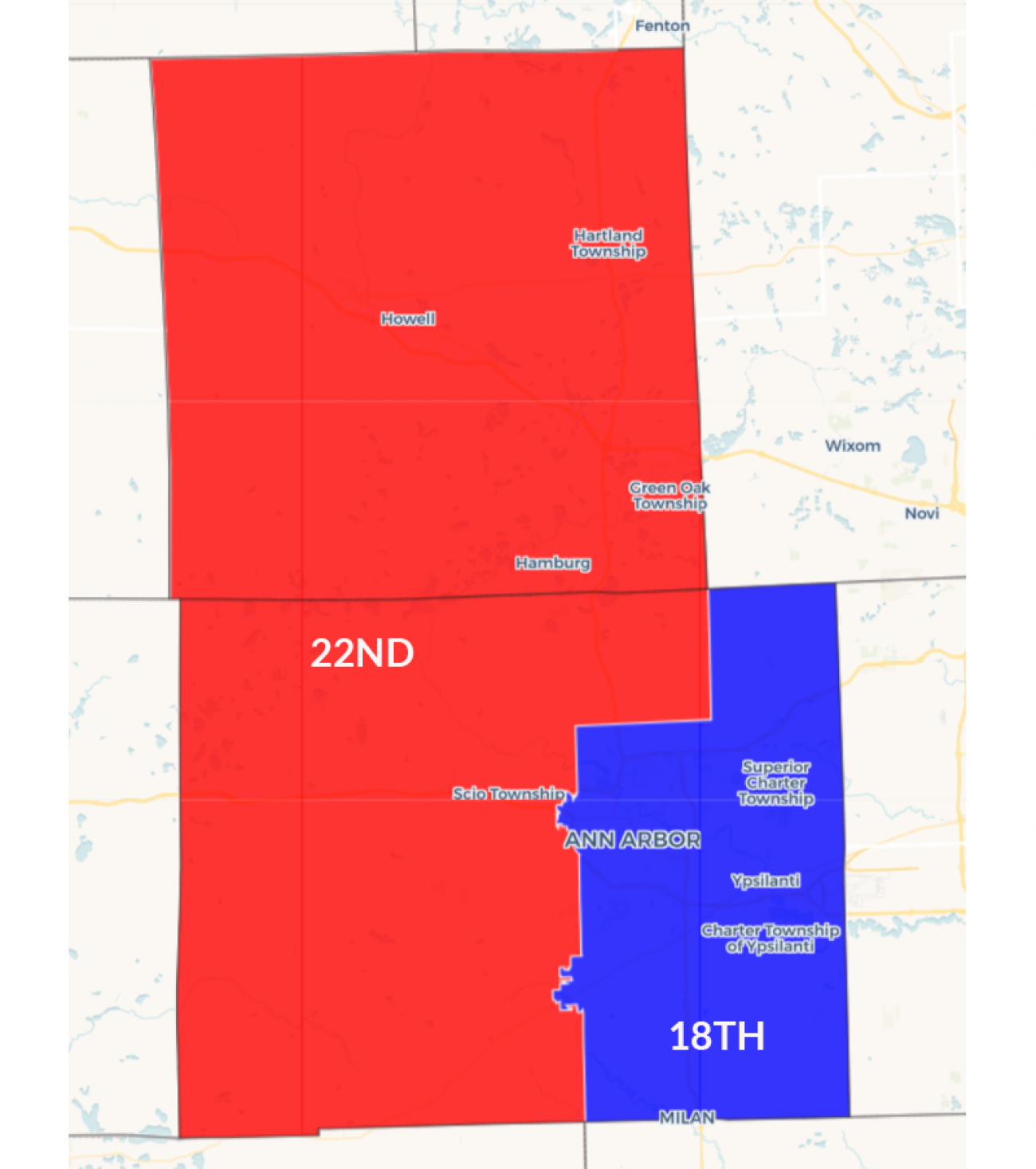 The 18th Senate District largely comprises the heavily Democratic leaning city of Ann Arbor and a few neighboring townships. In the redrawing of the two districts, the neighboring 22nd steered clear of Ann Arbor. The result was the 18th became slightly more Democratic, according to a Bridge analysis, and the 22nd retained a strong Republican majority.

In the 18th, Democrat Jeff Irwin, a former state representative, crushed Republican Martin Church by over 70,000 votes in a 77-21 victory. Former State Sen. Rebekah Warren won the 18th by 44 points in 2014. 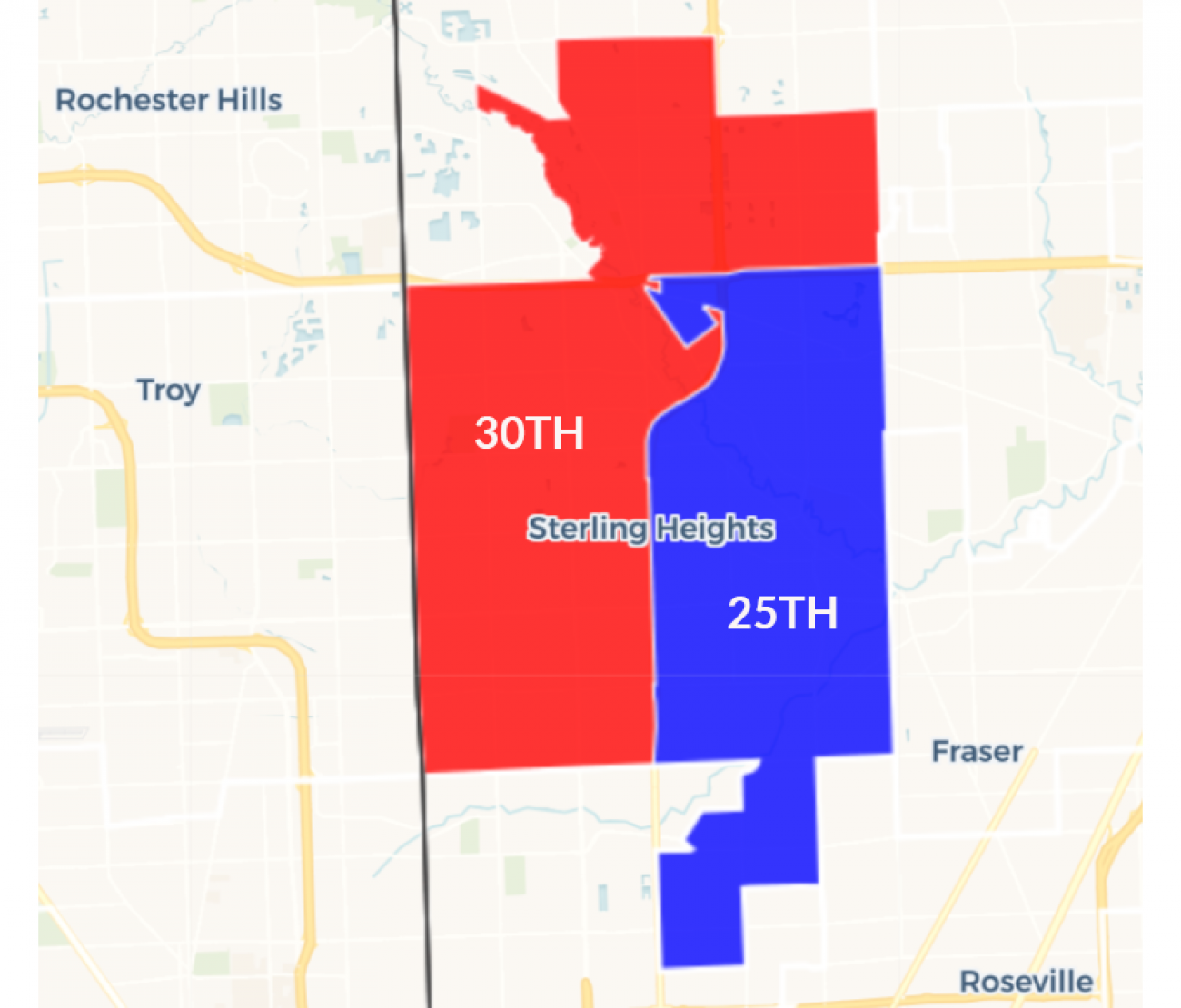 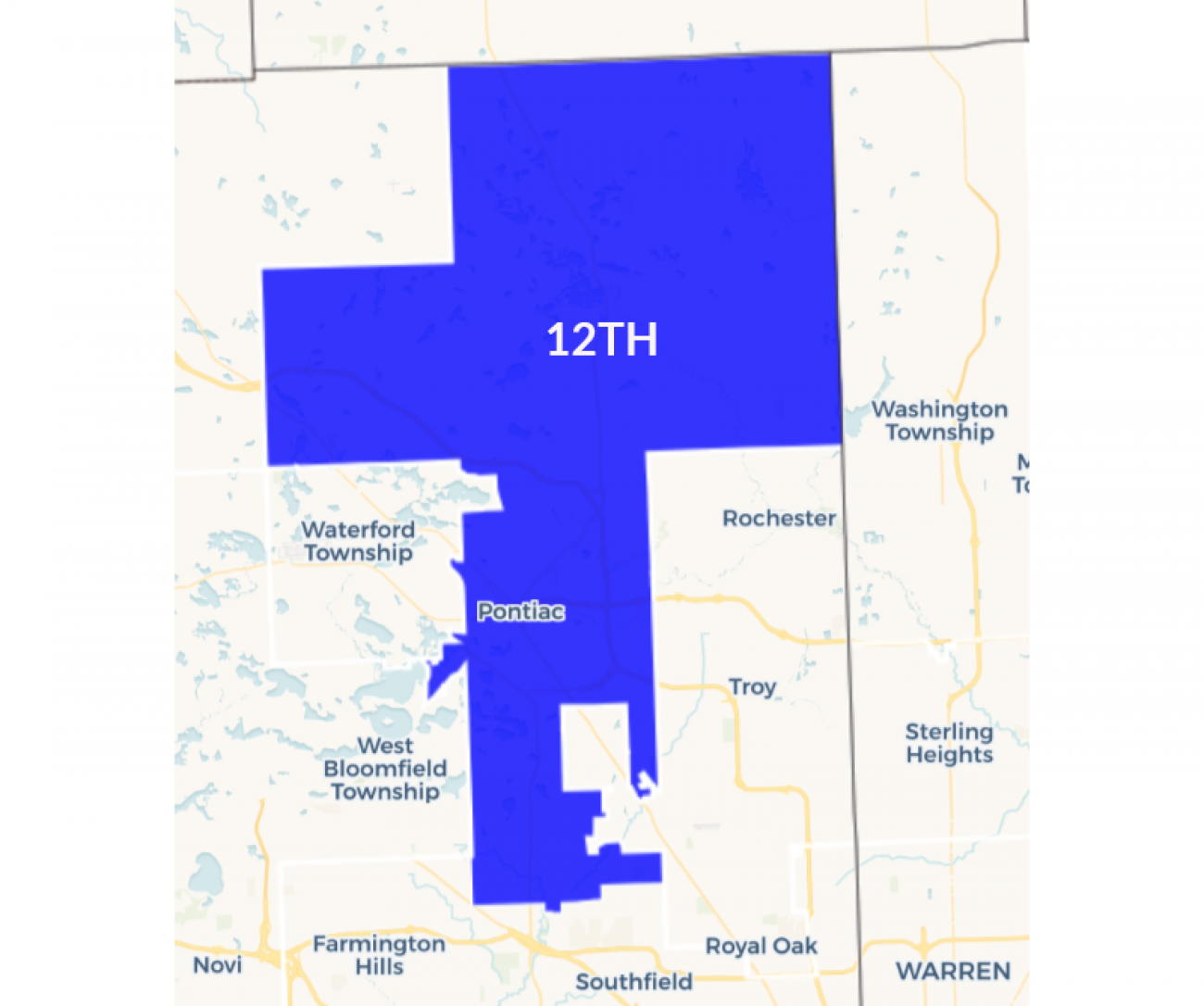 This northern Oakland County Senate district takes in largely Democratic Pontiac but also a number of Republican leaning townships to the north. After the 2011 redraw of boundaries, it remained a 60-40 Republican district and UM researcher Jowei Chen identified it as a patently partisan district in his analysis for the League of Women Voters’ lawsuit.

In 2014, the Republican Jim Marleau won this seat by a comfortable 15 points. Yet it took an incredible swing for Democrat Rosemary Bayer to erase and win Nov. 6, beating Republican Michael McCready by 0.8 of a percentage point (49.4-48.6) and fewer than 1,000 votes. 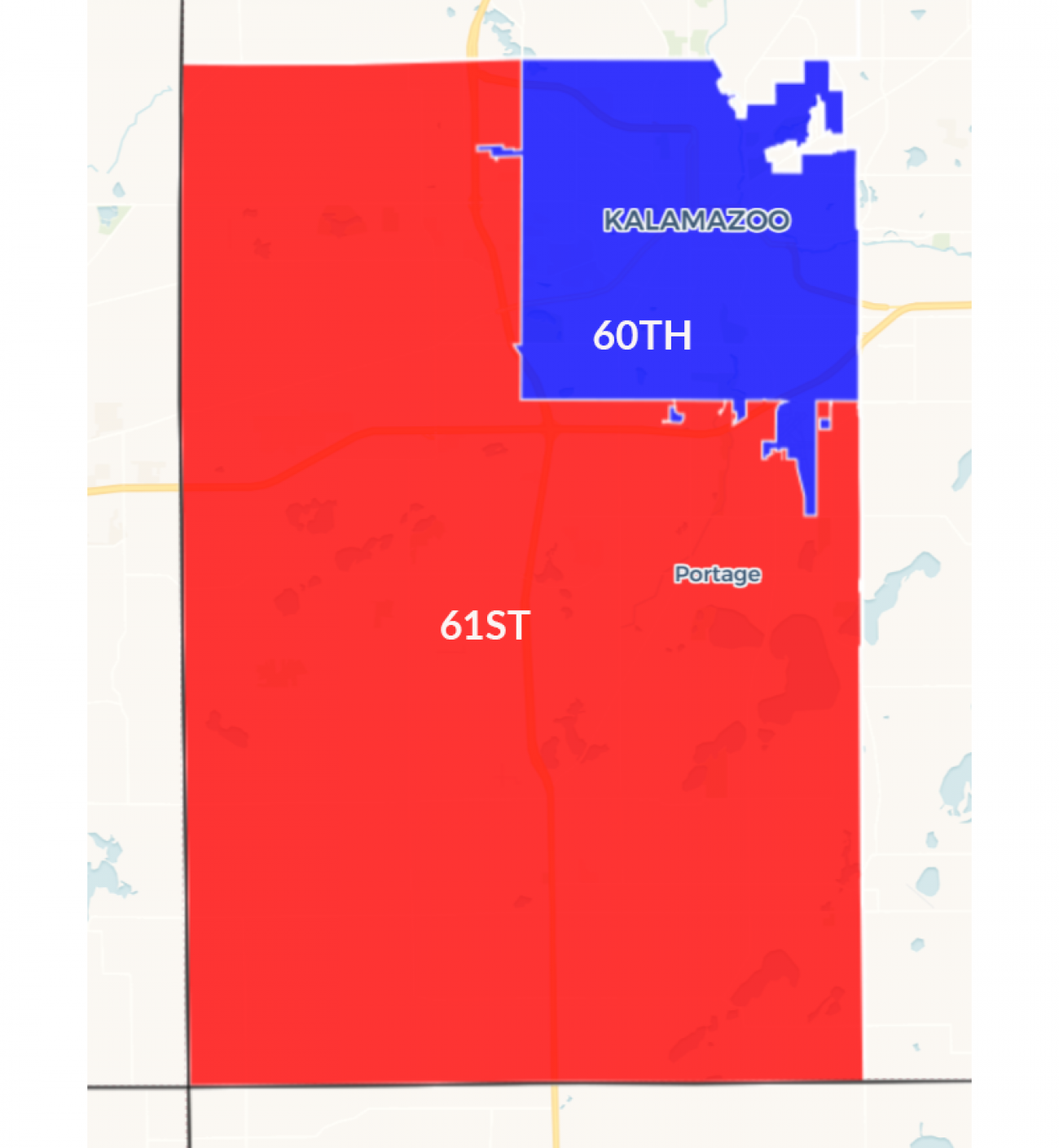 UM researcher Jowei Chen calls the 60th, which comprises Kalamazoo and neighboring Kalamazoo Township, a “partisan outlier” and it is a heavily Democratic district in a city dominated by Western Michigan University.

But the district adheres to state standards by staying within county and municipal boundaries. It did lose the Republican-leaning Cooper Township to the 66th District in redistricting. The tweaks, though slight, made the 60th more Democratic and the 61st more Republican.

Incumbents won both districts this year: Democrat Jon Hoadley scored a 77-33 victory over Republican William Baker in the 60th and Republican Brandt Iden narrowly beat Alberta Griffin 51-49 in the 62nd. Hoadley’s victory was similar in size to his 2016 win and Democrats won the seat by 49 and 40 points in 2012 and 2014 respectively. In the 61st, the Republican victory margin has continually narrowed:  from 17 points in 2012 to 6 in 2014 to under 5 points in 2016. 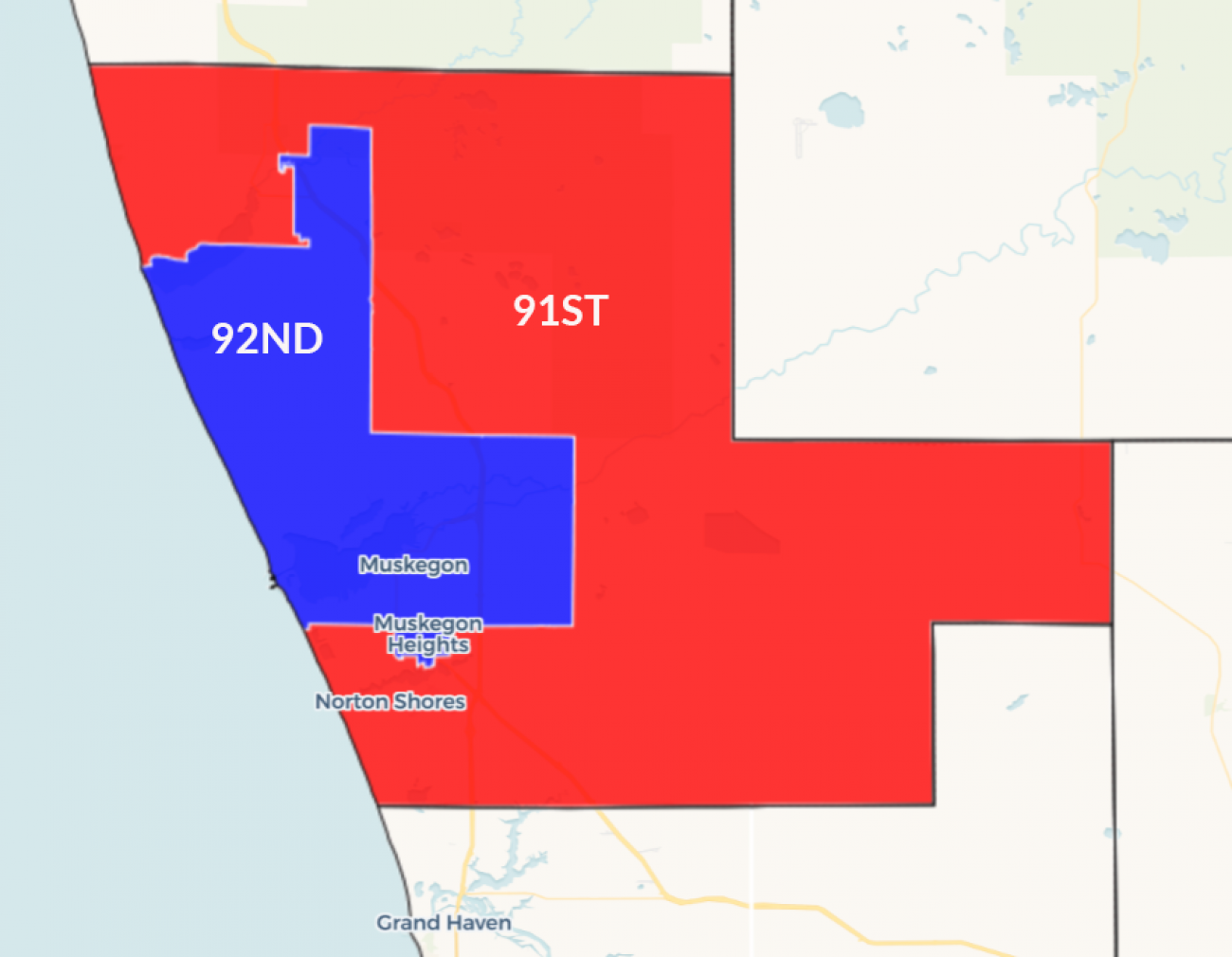 These Muskegon area districts point out a truth that emboldens Republicans and depresses Democrats: Much of rural Michigan is turning increasingly toward the GOP even as suburban areas are turning toward Democrats.

After the 2011 redraw, both of these districts retained their strong-Democrat (92nd) or strong-Republican (91st) leaning.

But despite tens of thousands of dollars from the Michigan Democratic Party and several large labor unions to support, Republican Greg VanWoerkom increased the Republican victory margin, beating Democrat Tanya Cabala 56-44 in a race for an open seat. In the 92nd, incumbent Democrat Terry Sabo beat Republican Gail Eichorst 69-31, nearly equal to his 2016 victory margin.