Three former governors of Michigan, two of them Republicans, said Friday that the Board of State Canvassers should certify Democrat Joe Biden as the winner of the presidential election in the state.

Nov. 23: Board of State Canvassers meet to review and certify statewide election results

Republican John Engler (1991-2003), Democrat Jennifer Granholm (2003-11) and Republican Rick Snyder (2011-18), told Bridge Michigan they expect the four-member board to certify the election on Monday like it has in the past, despite pressure from President Donald Trump to overturn the results.

Trump “didn’t win,” Engler said, adding that one of the board’s Republican members, Norm Shinkle of Ingham County, is a “good guy” who will “do the right thing” and vote to certify the results.

Three members of the canvassing board, which consists of two Republicans and two Democrats, must vote yet for the election to be certified, a key step in awarding Michigan’s 16 electors.

A 2-2 vote would mean the election is uncertified and throw an already angst-ridden election into uncertainty that courts would likely have to resolve.

“They should do their job, which is to vote to certify,” said Snyder, a Republican who endorsed Biden for president. “If you look at the results from this election, this appears to have even fewer errors than the last presidential election that got certified. It’s time for them to do their job.”

Local boards of canvassers in all of Michigan’s 83 counties this week certified results showing that Biden, a former vice president, won by 154,187 votes over Trump, a roughly 3 percent point margin of victory.

“It is really important for the members of these boards to realize that they have a duty, and never before in the history of the United States has a county or a state failed to certify an election when the popular vote was clear,” Granholm said.

Election certification is normally a mundane, bureaucratic affair, but the two Republicans on the four-person board, Shinkle and Aaron Van Langevelde, are under tremendous pressure, from calls from voters (their phone numbers have been passed around social media), to tweets from the White House.

The state Board of Canvassers consists of two Republicans and two Democrats who are appointed by the governor and must be members of each political party. They are paid $75 for each day they attend a board meeting, along with compensation for expenses.

They meet Nov. 23 to certify the results of state elections, a crucial step in making results official before Michigan awards its 16 electors to the Electoral College, which meets Dec. 14.

Here are the members:

Jeannette Bradshaw, Democrat, Oakland County: Bradshaw is chair of the Board of State Canvassers. She is a recording secretary and registrar for International Brotherhood of Electrical Workers Local 58 union in Detroit. She's held several positions with the Metro Detroit AFL-CIO.

Norm Shinkle, Republican, Ingham County: Shinkle is a longtime GOP activist and official who served in the Michigan Senate from 1983 to 1990. He chairs Michigan's 8th Congressional District Republican Committee. His wife, who was a poll challenger in Detroit, is a witness in President Donald Trump's lawsuit seeking to stop the certification of Michigan election results.

Julie Matuzak, Democrat, Macomb County: Matuzak retired as political coordinator for the American Federation of Teachers union. Prior to that, she was an aide to former U.S. Rep. David Bonoir. Matuzak was on the ballot this year and is poised to join the Macomb County Board of Commissioners after topping her Republican opponent by 215 votes in the 12th District race.

Aaron Van Langevelde, Republican, Eaton County: Van Langevelde, appointed by former Gov. Rick Snyder in 2018, is vice chair of the canvassers. He is an attorney and currently works for Michigan House Republicans. He previously served as an assistant prosecuting attorney in Branch County.

Trump on Friday hosted Michigan Republican lawmakers in Washington, a move widely condemned as an overt attempt to lobby them to ignore the will of voters and choose presidential electors for him.

"The Great State of Michigan, with votes being far greater than the number of people who voted, cannot certify the election," Trump wrote Wednesday in an erroneous tweet, equating fraud with likely clerical errors that caused poll book discrepancies in several precincts. "A Republican WIN!"

A Lansing fixture and a mystery

There’s little doubt the two Democrats on the board, Jeannette Bradshaw of Oakland County and Julie Matuzak of Macomb County, will vote to certify the results.

The pressure is on the Republicans.

Shinkle has been a fixture in Lansing for decades, a former powerful state senator and a friend of Engler who used to go out drinking with reporters.

Van Langevelde of Eaton County is more of a mystery around the Capitol, a low-profile lawyer who few insiders know.

Shinkle told Bridge Michigan this month he makes “no predictions” about how he will vote. Van Langevelde hasn’t spoken to the media, and didn’t return numerous calls and texts from Bridge for comment.

As a state senator who rose to be chair of the Senate Finance Committee in the late 1980s, Shinkle was part of the “brain trust” of Engler, according to Roger Martin, partner at Martin Waymire advocacy communications in Lansing.

Martin was a reporter at The Detroit News when Shinkle was in the Senate from 1983-1990, and socialized with him on many occasions.

Shinkle chairs Michigan’s 8th Congressional District Republican Committee. His wife, who was a poll challenger in Detroit was a witness in Trump’s lawsuit seeking to top the certification of Michigan election results.

Shinkle hasn’t shied from partisan controversies on the board.

In 2012, he was one of two Republicans who tried to keep a ballot proposal to eliminate the state’s controversial emergency manager law off the ballot, by arguing that the font size on petition headings was the wrong size.

The Supreme Court stepped in, and the ballot proposal made it to voters, who repealed the emergency manager law, which had been used frequently by Snyder.

“He’s a loyal partisan, but I’ve never known him not to play by the rules,” Martin said. “He’s a lawyer and a man of strong faith. He’s a very religious, traditional conservative Republican. He’s a stand-up guy, and knows what power he has and doesn’t have [as a member of the board of canvassers.] And those powers [do not include] calling for an investigation of an election.”

Trump has pointed to unproven claims of fraud in Detroit in lawsuits that sought to delay certification and went nowhere. Engler said that despite those claims, it’s quite clear that Biden got more votes by increasing support for Democrats statewide.

“It's pretty clear that Joe Biden increased the turnout, ... and he increased [Democratic]  margins over four years ago that was sufficient to carry [the state,]” Engler said.

Engler predicted Shinkle “will act in an honorable fashion.”

One other motivating factor: Legal experts say that because Shinkle and Van Langevelde are attorneys, they could even face professional sanctions if they fail to do their legal duty and certify.

In 2008 the Michigan Attorney Grievance Commission charged a Democratic state canvasser with professional misconduct for refusing to ratify petitions.

“Norm Shinkle and the other Republican members of the board of canvassers should be very careful to not put themselves in jeopardy, legally, by doing something that is a complete aberration,” Granholm said.

Van Langevelde is the “other” Republican member Granholm referred to. He is an attorney who lives in Charlotte, and was appointed to the canvassing board in December 2018 in the waning days of Snyder’s administration.

But even several people in the Snyder administration say they know little about him.

“I know of him, but I can’t say I know him,” said Brian Calley, who was lieutenant governor at the time of Van Langevelde’s appointment. “The fact that he is a lawyer with a low political profile sounds like something Rick Snyder would do.”

Van Langevelde doesn’t appear to have a presence on social media, and calls to numerous lobbyists and Republican and Democratic insiders found few who had heard of him.

What is known: Van Langevelde is a former assistant prosecuting attorney in Branch County, who now works as an attorney with the Republican House caucus. That caucus is led by Republican Speaker of the House Lee Chatfield, who traveled to the White House with Republican Senate Majority Leader Mike Shirkey Friday for a meeting with President Trump.

On Wednesday, Chatfield told Bridge Michigan he had no influence on the canvassing board.

“I am not on the board of state canvassers. I can't speak to whether or not this election gets certified," Chatfield said. "That's their job and not mine. My job is to investigate the reports of fraud and of irregularities. They have their decision to make at the same time."

Snyder said he doesn’t know Van Langevelde “personally” and appointed him after he cleared a vetting process.

“If I had the opportunity to speak with him, I would say, ‘Just do your job. Just go certify,’” Snyder said.

Snyder, who has preached civility in politics, said the nation is “at the lowest point I can ever think of, and a large part of that is because of the president’s terrible behavior during this time period.”

May 5, 2021 | Jonathan Oosting in
Michigan Government 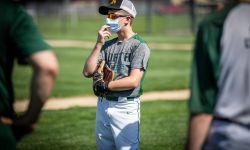