COVID testing is critical in Michigan. But how soon is too soon?

The uptick in the delta variant and loss of effectiveness of initial vaccine doses have sent more people to the hospital with breakthrough cases. But experts say those patients are typically less sick than the unvaccinated. (Shutterstock)
November 19, 2021
Robin Erb (Email)
Michigan Health Watch
Coronavirus Michigan

Michigan Health Watch
COVID testing is critical in Michigan. But how soon is too soon?

With holidays approaching and Michigan’s COVID infection rate soaring, there are plenty of reasons for all kinds of folks to get tested for the virus.

So it’s important to do it right. But too often, doctors and health workers say, people are doing COVID testing wrong. They’re testing too early — before infection has built up enough to register on a swab test.

“Patients panic, and they go in and they get swabbed. As they go home and read the fine print, they’re saying, ‘Oh geez, I probably went too early,’” said Nick Decker, director of laboratory services at Memorial Healthcare in Owosso.

With COVID testing, there’s a period of time that must pass from possible exposure — several days, usually — to produce reliable results.

Think of it like a home pregnancy test. They can be nail-biting days for an anxious couple when there aren’t enough biomarkers yet to register the pregnancy, and the tell-tale line or plus sign on the stick can be fuzzy or faded or not show up at all, said Dr. James Richard, a laboratory veteran who now runs Sparrow Laboratories in Lansing. 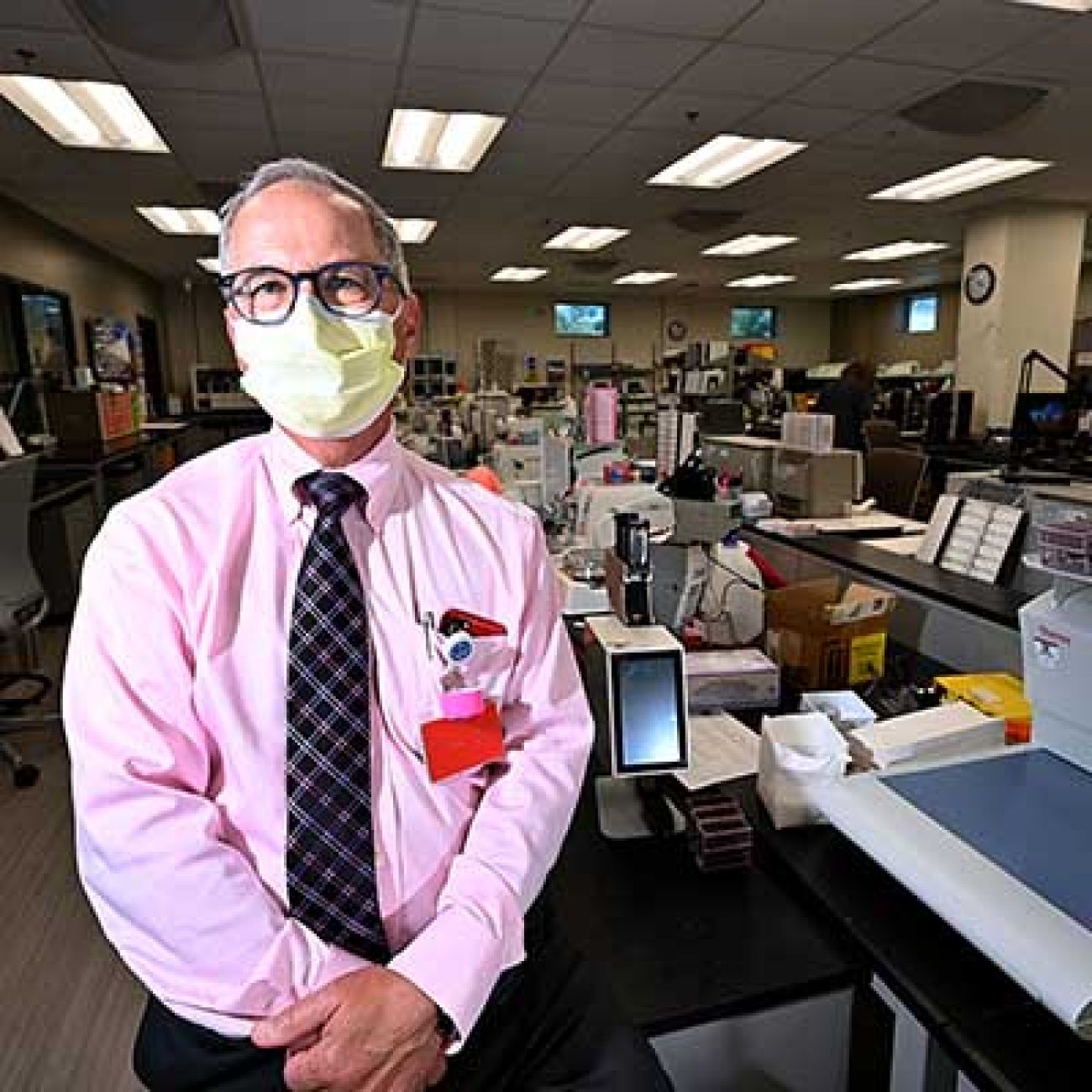 Much like a pregnancy test, a COVID test needs to reach a threshold of biomarkers for a positive result, and that takes a little time, said Dr. James Richard, who runs Sparrow Laboratories in Lansing. (Bridge file photo by Dale Young)

Did that positive line just fade? Is that a positive sign? Or a hallucination?

“It’s a gray zone, and in that gray zone, we aren't really sure” of a pregnancy, he said.

Only when the woman has built enough pregnancy hormone, human chorionic gonadotropin, is the result definitively positive.

Now, too many Michiganders are finding themselves in a similar gray zone when it comes to COVID testing, possibly helping fuel at least some of COVID’s spread.

Early detection is critical, Decker said, but it takes several days for the body to build up enough viral load and the body’s response to it — antigen — to be detected. In those early days, “panic testing” wouldn’t reveal a budding infection.

Decker and others worry about false negatives when people get tested too early after an exposure — especially with over-the-counter home tests. Too-early results often serve as a greenlight to return to work, school, social activities and holiday gatherings, unknowingly contagious.

So, for instance, being exposed to someone with COVID at a party on Saturday night, finding out about the exposure Sunday, and testing negative on Monday morning doesn’t necessarily mean you’re not infected. But, said Decker: “patients see a negative test (result), and that’s it.”

How much time should pass after possible exposure depends on multiple factors: exposure risk, vaccination status and the type of test taken.

The Food and Drug Administration has authorized more than a dozen over-the-counter COVID tests. They’re not cheap, which can make wasting them even more frustrating for the consumer, Decker and others said.

A list of approved home tests is here, but costs may vary among retailers. (Search for “home” to limit results to at-home kits.)

The Centers for Disease Control and Prevention recommends testing if you:

In Michigan’s Thumb region recently, Dr. Mark Hamed took note of about 40 cars lined up for COVID tests as he left his shift at McKenzie Hospital. It was clear from the questionnaires of those who were to be tested that about half of them had driven here because they’d been told they had been exposed to COVID a day or so earlier.

That’s generally too early to develop symptoms or, critically, to test positive, Hamed said. Many were simply “the worried well” with no symptoms.

Too-early testing can compromise the accuracy of both antigen tests and polymerase chain reaction, or PCR, tests.

PCR tests are usually performed at a hospital and read by a lab, and are considered the gold standard of testing. The PCR also is likely to detect an infection before a rapid, at-home antigen test.

Antigen tests are likely to produce positive results about the same time as symptoms develop, helping to differentiate COVID from other respiratory infections.

It’s natural to “want certainty,” said Dr. Brad Uren, an emergency doctor at Michigan Medicine and past president of the Michigan College of Emergency Physicians.

“We have seen patients are sometimes frustrated when you tell them that ‘Well, your test was negative...It’s possible that you still have COVID,’” he said. “That's dissatisfying for patients, but unfortunately, it's still reality.”