Feb. 10: Michigan counties drop mask mandates as COVID plummets. Schools may follow.
Jan. 26: COVID may be here to stay. So much of Michigan is weighing risks, moving on

DOWAGIAC — Seated in a barber shop in the southwest corner of Michigan, David DeHart left no doubt where he stands on COVID-19 vaccines.

“Absolutely not. There’s no way I’m getting a shot.”

DeHart rattled off his reasons why: He claimed the vaccines don’t protect against the coronavirus, cause heart problems, taint the nation’s blood supply and are part of a “plandemic” to give government greater control.

As for health concerns about the virus? The 77-year-old paraphrased a verse from the Book of Isaiah in the Bible.

“Fear not, for I am your God and I will hold you up with my righteous right hand.”

Such sentiments aren’t unusual in this rural stretch of Michigan, even though they are decidedly against accepted science.

Cass County is home to 50,000 residents, more than 700 farms and the lowest vaccination rate in Michigan, 39.6 percent of all residents 5 and older. That’s well below the 61.1 percent of all state residents who have been vaccinated.

It’s a familiar phenomenon in rural areas throughout Michigan (as well as pockets of the state’s most-populated cities), and it’s one reason why the state’s vaccination rate is 32nd in the nation and well below the national rate of 66.9 percent.

Now that the U.S. Supreme Court has rescinded President Biden’s nationwide vaccination mandate among large employers, persuading rural residents to get the shot is all the more crucial to the state’s strategy to fighting the virus.

The 10 counties with the lowest vaccination rates in Michigan are all rural — and health officials say they are using a mix of education, persuasion and influence to try to win over holdouts.

They’ve largely ruled out changing the minds of diehards like DeHart, but the United Way of Southwest Michigan is amid a $44,000 survey of unvaccinated area residents to figure out why they are holding back.

“We’ve come to accept that there are some people that may never choose to get the vaccination,’ said Danielle Persky, health officer for the Van Buren Cass District Health Department, which administers health care in those two rural southeastern counties. 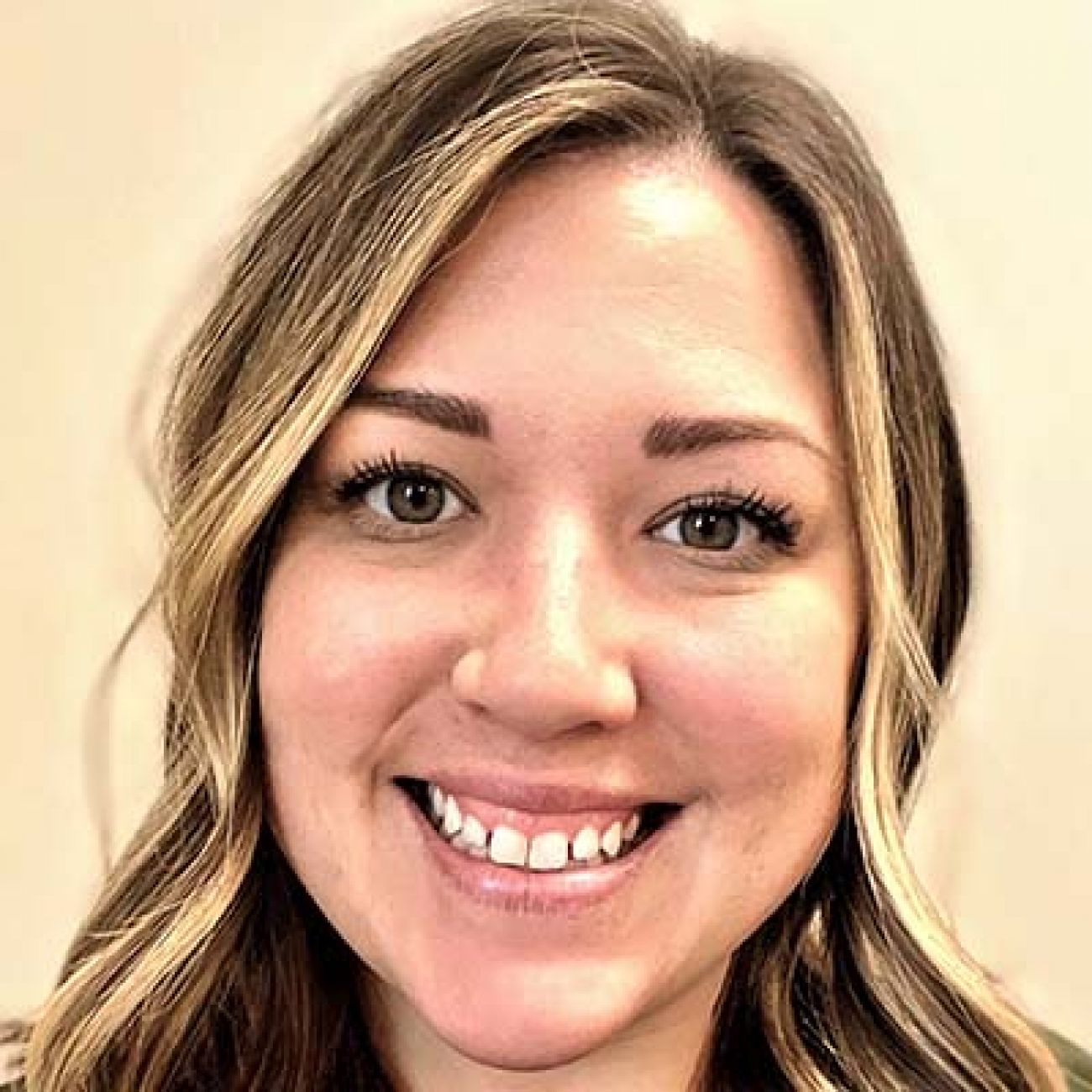 Danielle Persky of the Van Buren Cass District Health Department: said that “we’ve come to accept that there are some people that may never choose to get the vaccination.” (Courtesy photo)

“To some degree, it feels like there is resistance to the vaccine ─ whatever the reason today is the reason. You are kind of chasing a moving target,” Persky said.

The vaccination effort largely falls to folks like Dr. Matthew Pazderka, who is among thousands of Michigan physicians who have daily, quiet, conversations with their patients about COVID-19 and vaccination.

He’s chief medical director of the Niles Community Health Center, a federally-funded community-based health care clinic in the city that straddles both Berrien and Cass counties.

Pazderka told Bridge he plays the role of listener and counselor, rather than hard salesman for the vaccine. 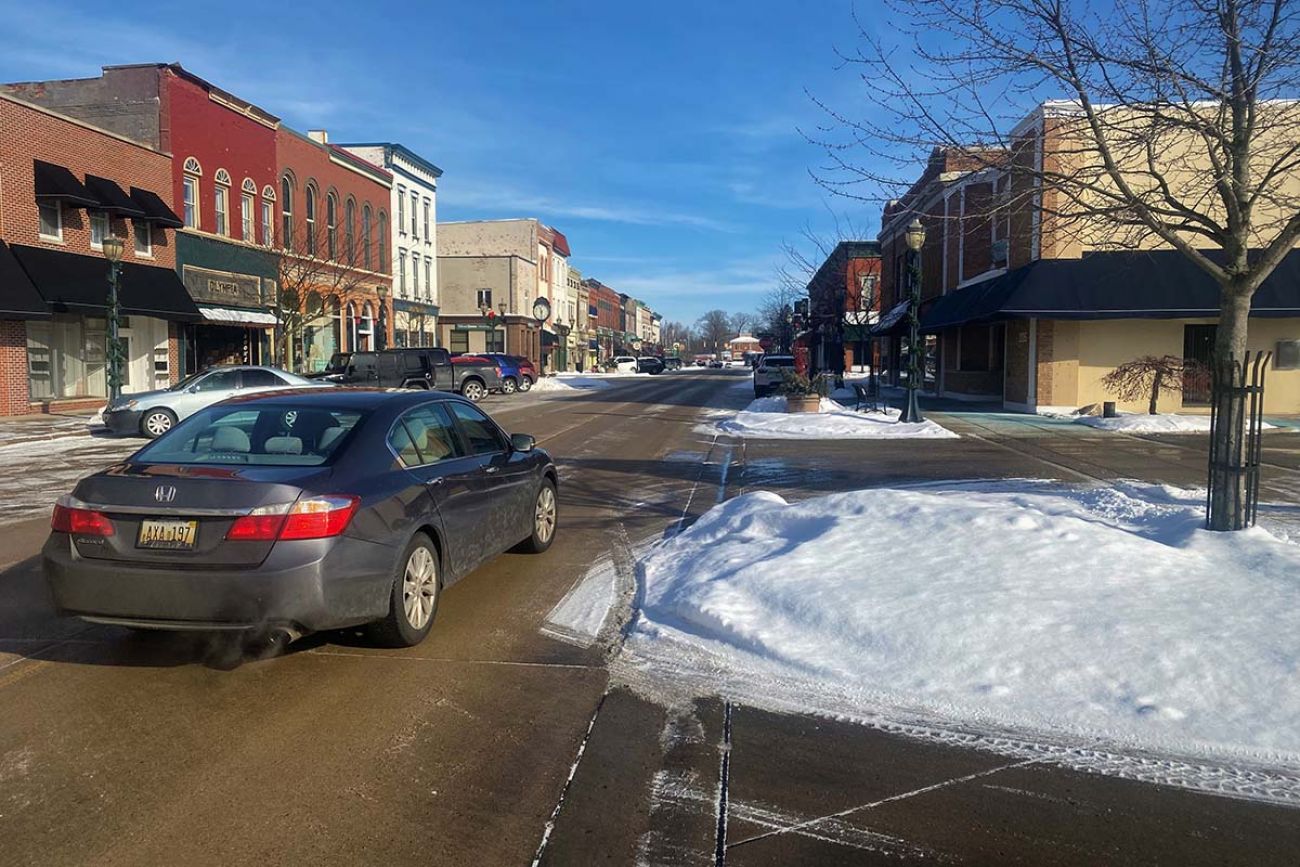 “I would say if a patient is asking questions about the vaccine, they are at least interested in getting some information. If I have to bring it up, they shut it down pretty quickly. I really try to steer clear of politics and try to get my patients to look through a different lens in how they are thinking about it.”

“The hardest part for us is we can only do so much if our patients are unwilling to have the conversation,”  Pazderka added. “We are handcuffed as a community if people have already made up their minds.”

Along with other counties in the state’s southern border, the vaccination rate in Cass County could be depressed because some residents got shots in Indiana or Ohio and weren’t reflected in Michigan records.

But hesitancy is so widespread in those areas that the United Way of Southwest Michigan also is paying Rebecca Medlin and nine others $300 a month to serve as “vaccine champions” to spread positive messages about vaccination.

Medlin coaches a competitive cheer squad Edwardsburg High School, near the Indiana border, and owns a clothing boutique she runs out of her home and officiates at weddings, commitments that put her in contact with lots of people. 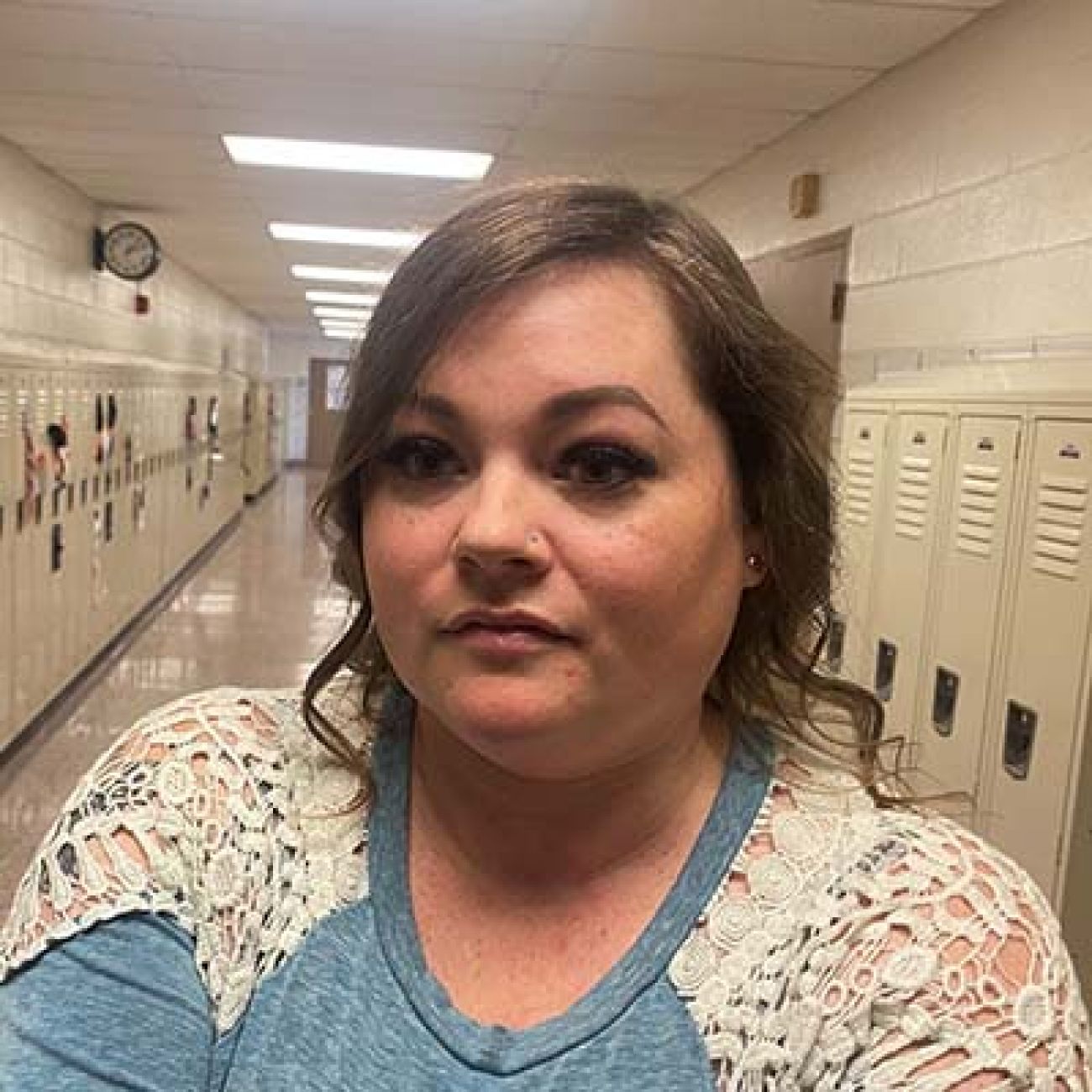 Rebecca Medlin of Cass County is a “vaccine champ” who encourages area residents to be vaccinated for COVID-19. She is paid by a local United Way to spread the word about the vaccine. (Bridge photo by Ted Roelofs)

She estimates she’s talked to at least 300 people about COVID-19 vaccination.

“I try to wait for it to come up so it’s not so aggressive,” she said, as she prepared at the high school for that day’s cheer practice.

And while Medlin has heard the usual array of disproven conspiracy theories  ─ vaccines contain a tracking computer chip, cause infertility and fight a virus that isn’t real ─ she said they boil down to a common denominator.

“Trust. There is a lack of trust in anything new,” she said.

Changing people’s minds, though, is far from easy.

Sitting behind the desk of a fitness center in Dowagiac’s small downtown, Jamie Chavez, 37, said she has no reason to trust dire warnings about COVID-19 or get vaccinated. 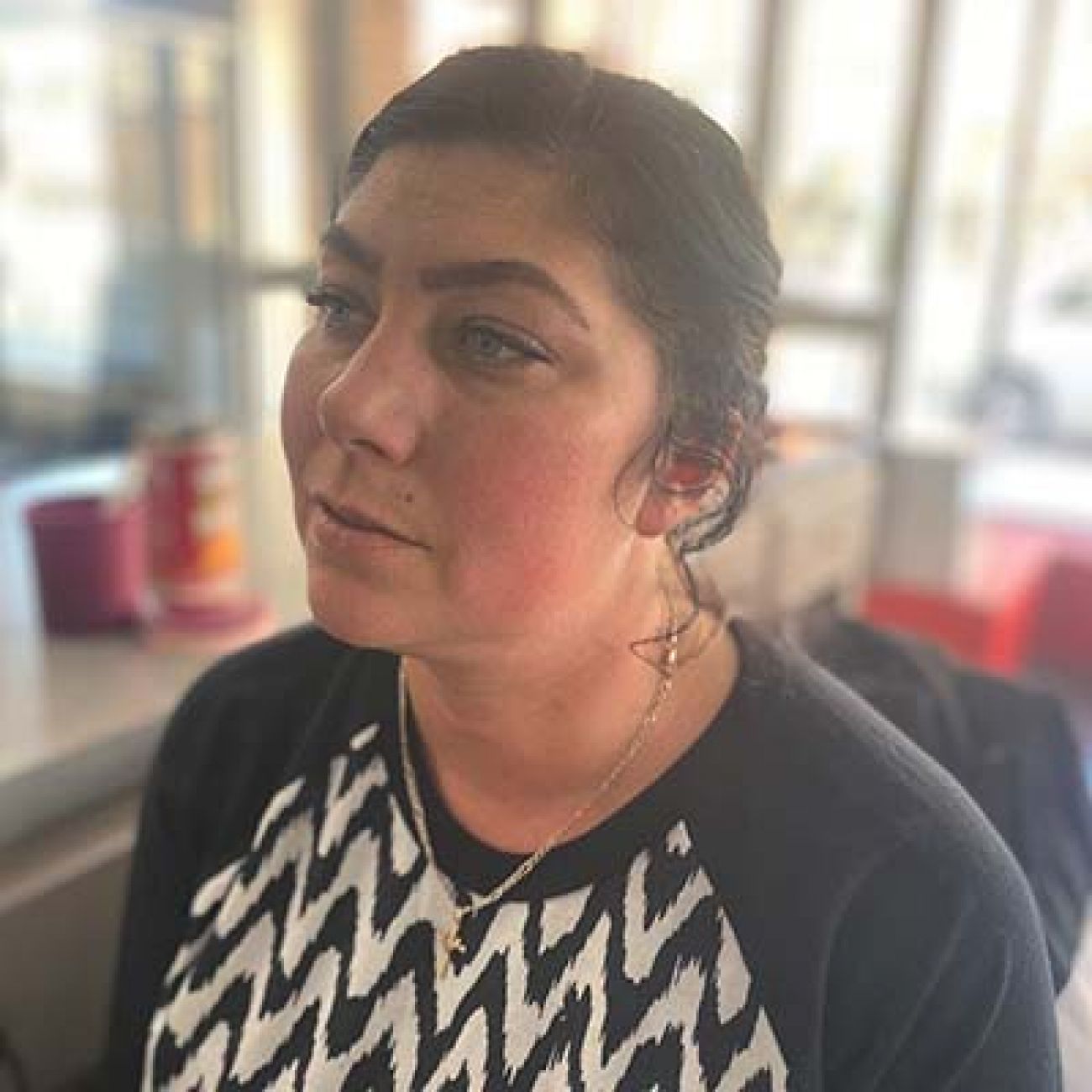 Cass County resident Jamie Chavez said she sees no reason to be vaccinated for COVID-19. (Bridge photo by Ted Roelofs)

“They are making COVID bigger than it really is. I think it has to do with your age and underlying health issues, things like that.”

Chavez said there’s only one scenario that could change her mind ─ with relatives in Mexico, she wonders if she might be forced to submit proof of vaccination to enter the country. Mexico currently has no such requirement.

“That would be the only reason,” Chavez said.

One of Cass County’s state representatives, Steve Carra, R-Three Rivers, said he and others opposed to the vaccine are simply “pro freedom” and opposed to “government coercion.”

“I am not vaccinated for COVID-19 and I don’t intend to be,” said Carra, who is running against fellow Republican U.S. Rep. Fred Upton, who opposed the government mandate but is a vigorous supporter of the vaccine.

He and Chavez said politics doesn’t motivate their opposition, although studies have claimed that Republicans are more likely to refuse vaccines.

In November, a survey by KFF, a California-based nonprofit health researcher, found that 60 percent of unvaccinated U.S. residents were Republican, compared to 17 percent who were Democrats and 17 percent independents. Of unvaccinated Republicans, 61 percent were aged 18 to 50 and 68 percent considered themselves conservative.

Cass County is heavily Republican, as is neighboring Hillsdale County, where just 41.3 percent of all residents are fully vaccinated.

Even so, Democratic strongholds like Detroit and Flint have low vaccination rates as well, while some Republican counties — like Mackinac County in the Upper Peninsula — have rates far above the state average.

Education also plays a role: A September national survey by the Pew Research Center, a nonpartisan Washington D.C.-based think tank, found that 89 percent of those with a post-graduate college degree were vaccinated for COVID-19, compared to 81 percent with a college degree and 66 percent with a high school degree or less.

In Cass County, 19 percent of residents have a college degree, compared to 29 percent of all state residents.

A January 2021 national poll by KFF found that rural residents were “significantly less likely” to say they would get a COVID-19 vaccine than those in suburban and urban areas. Political affiliation and education alone did not explain the difference, it found.

“Even when we control for these factors, individuals living in rural areas are still more likely to be vaccine hesitant compared to those living in suburban and urban areas,” it found.

Denise Bryan said the attitudes are similar in West Branch in the northern Lower Peninsula, where she is health officer in District Health Department No. 2 for four rural counties ─ Alcona, Oscoda Ogemaw and Iosco.

There, rates of full vaccination among all residents range from 47.9 percent in Ogemaw County to 60.9 percent in Alcona County.

But there are apparent limits to how much people want to hear.

That’s what health officials fear, as the pandemic has reached peaks in both daily COVID-19 cases and hospitalizations, driven largely by the highly contagious omicron variant.

Michigan’s Department of Health and Human Services reported an average of 18,557 cases on Thursday and Friday, and 4,918 hospitalizations on Friday. The state reported 251 deaths for those two days, including 140 that followed a review of medical and health records.

On Jan. 11, the state’s chief medical executive warned that COVID-19 hospitalizations could increase 60  percent in the next few weeks, pressuring hospitals already at the breaking point.

Dr. Natasha Bagdasarian said models predict as many as 8,000 COVID-19 patients could be hospitalized by late January or early February, well above the 5,000 now being treated.

“This is a very dangerous time for us and this is not what we want to see with cases exploding the way they are,” she said.