Treating mothers’ trauma as a way to prevent youth violence

Florence Roberson speaks to attendees of the SURE Moms peer support group in Ann Arbor on Jan. 15. (Photo by Seth Herald for The Trace)

This story was originally published at The Trace, a nonprofit newsroom covering gun violence in America.

Every Wednesday, two dozen mothers gather at the Community Correction Center in Ann Arbor. Dinner starts promptly at 6:30 p.m. The menu varies, but the women especially like when the organizers order from Dicky’s Barbeque Pit — brisket, baked beans, and potato salad, washed down with some pop. After dinner, the group of mostly African-American mothers talk, laugh, and sometimes cry over their shared experiences. Each of the moms has a child who has been arrested and detained by the local juvenile justice system.

The program bringing the mothers together is called Sisters United Resilient and Empowered, or SURE Moms. It’s run out of the same office as the local violence interruption program, which follows a model popular among cities trying to curb homicides and assaults, deploying former offenders and other outreach workers to steer high-risk young people away from solving conflicts with a gun or other weapon before it’s too late. But SURE Moms focuses on an area less often targeted by anti-violence efforts. It tries to lower juvenile crime and recidivism by providing counseling and support to the mothers of kids linked to much of the area’s violence. It’s not about what happens on the street, but what happens in the home.

“The mother has to do their emotional work first,” said Leah Mills, a social worker and trauma therapist in Washtenaw County who assists with SURE Moms. “When they become healthy, they can give their children the emotional support the children need.”

Florence Roberson, a chaplain at the county jail, started the program in 2016 as an outgrowth of a weekly Bible study class she ran for incarcerated women. In those sessions, she noticed that the trauma apparent in the women’s lives was often coupled with traumas in the lives of their children. A single moment convinced Roberson she needed to do more to help.

“One night, I asked if any of the mothers had been sexually molested,” Roberson said. “Every mom’s hand went up.” 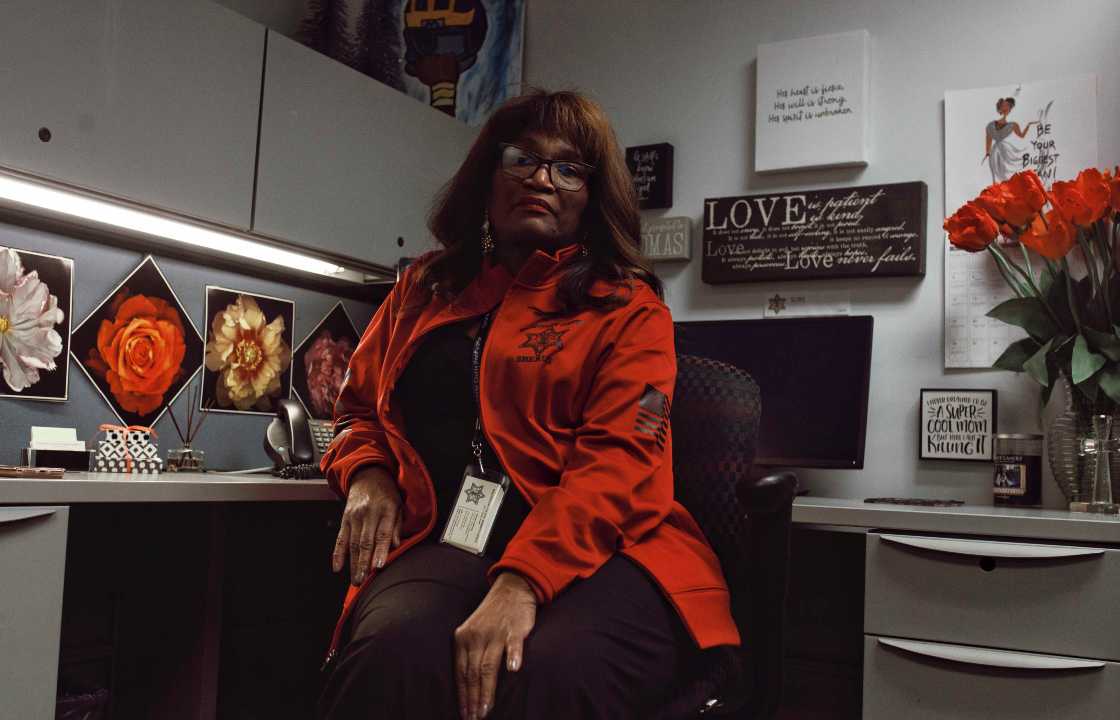 Roberson sits at her desk before a SURE Moms meeting. (Photo by Seth Herald for The Trace)

Roberson approached Derrick Jackson, a social worker and the director of community engagement with the local sheriff’s department. He saw the connection Roberson was making with mothers through her Bible classes. He also knew that the courts wanted to see better outcomes for children in the system. By helping moms heal and gain stability, maybe they could short-circuit a message he frequently heard at crime scenes.

“They say, ‘I lost control of my son in his early teens, and I couldn’t get control back,’” Jackson said. He greenlit SURE Moms with $10,000 of financial support from the county’s juvenile court.

SURE Mom’s approach is supported by research showing that children raised in traumatic environments are more likely to engage in criminal behavior. According to a 2016 report by the Fordham Urban Law Journal, 50 percent of the juveniles involved in the justice system reported being treated poorly by parents. More than 30 percent say they have experienced physical violence. But when Roberson founded the group, she was operating from instinct and personal observation, not peer-reviewed studies. What she started in 2016 was informal. She is not a social worker, nor did she invite licensed social workers or trauma therapists to lead those early SURE sessions, though they would join later. What she could offer was a listening ear, a safe space to express pain, and accountability. Roberson would follow up with moms to make sure they didn’t miss their own or their children’s court dates. If they needed a ride, she would drive them to the courthouse herself.

Ann Arbor, home to the University of Michigan, has the image of an idyllic college town. But beyond the campus is a city where more than one in four live in poverty, according to the Census Bureau. While Ann Arbor and surrounding Washtenaw County, home to 340,000 residents, record fewer than 20 homicides per year, the county’s violent crime rate for juveniles is nearly 40 percent higher than the rest of the state, according to the most recent available figures. For black youth, the violent crime rate was nearly twice the state average.

In Ann Arbor, as in cities around the country, many children who find themselves cycling through the criminal justice system grew up witnessing their mothers’ hardships. One participant, Kim Warren, will tell you she was struggling when she found SURE Moms. Her teen-aged son was violent in school and at home. He had started carrying a firearm and was involved with a local street gang. In 2016, the 16-year-old was arrested for assaulting another student at school.

But Warren’s problems were not limited to her son’s behavior. As a child, Warren was sexually assaulted. Later, she became a victim of domestic violence. She was severely depressed and suicidal.

Her son’s drug use landed him in court, where Warren met a truancy officer who directed her to SURE Moms. It became a place where she could begin to learn how to better care for herself, and in turn be a better parent to her son.

Warren’s son, now 20, still struggles to hold down a job. But in sessions with his mom and SURE Moms’ trauma therapists, the young man is beginning to open up.

“He can cry now,” Warren said. “Before, he could never cry.” 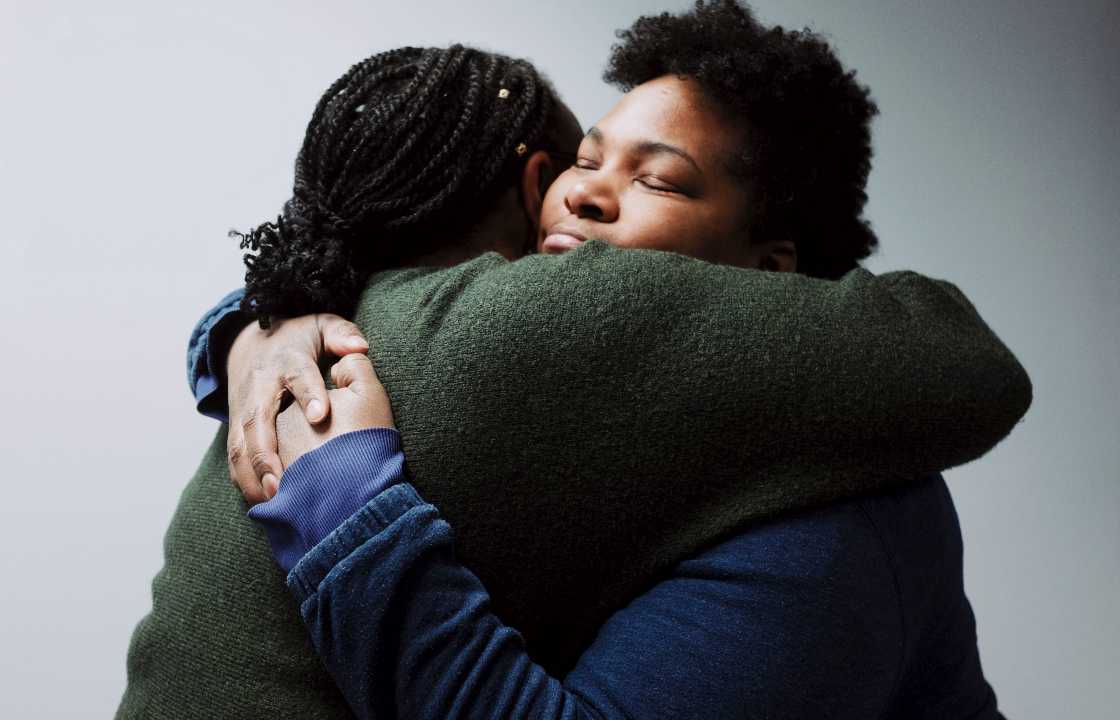 Kim Warren, right, embraces a fellow SURE participant after a meeting. (Photo by Seth Herald for The Trace)

Stories like Warren’s are common among the mothers in the program, according to Leah Mills and Stacey Doyle, the trauma therapists who began volunteering with SURE Moms after the program launched.

“Lots of tears. Lots of pain and suffering,” Doyle said. “There are no easy conversations.”

Pat Davis is a survivor of domestic violence who started with SURE Moms in the summer of 2016. Like many parents in her circumstances, Davis could not bottle up the pain she experienced at the hands of her abuser. It bubbled over in depression, and in anger.

Sitting in SURE Moms meetings, Davis said she got to “cry, scream, and yell.” After nearly four years into the program, she counts herself as a success story. She got herself back in school and earned a degree in Human Services. She still appreciates the steadying effects of the SURE Moms meetings.

SURE Moms’ budget has grown to $90,000 this year, and Roberson is now a full-time employee. This year, Jackson plans to begin tracking the impact of the program, measuring how many children of SURE Moms stay out of detention and jail — and which ones go back in. Already, there’s reason to believe that the program represents a bargain for policymakers. The most recent data on the cost of incarcerating juveniles dates back to 2014, but back then, Michigan was spending more than $266 a day per incarcerated teen. A 90-day detention stay for a single juvenile cost taxpayers nearly $25,000.

SURE Moms will need to grow further in order to meet demand for its services. The two dozen moms who now show up to the weekly meetings is about as many as Roberson and the two trauma therapists can handle. The group has expanded to hold a second meeting each week. It might soon need a third.

While SURE Moms is embedded inside a law enforcement agency, Jackson never intended for the mothers to act as liaisons for the Sheriff’s Department. But he recalled attending one meeting and asking the mothers to notify him if they discover their children have a gun. He got a call later that night. Since then, he has recovered four firearms from the homes of SURE Moms.

Sometimes, meetings turn into sessions where beefs are settled. Community violence is typically concentrated among a small number of actors; in Ann Arbor, they include children of SURE Moms, or young people a few degrees removed. When shots ring out in the city, the reverberations are felt at the group’s next meeting. “The mothers know the victims, the shooter, or someone in the car, or the house where the incident went down,” said Roberson.  Along with Jackson and Doyle, she has witnessed mothers as they’ve forged peace agreements between their families.

Doyle recalled a meeting when one SURE Mom looked into the eyes of another as tears rolled down both of their faces.

“I am going to have my son not shoot your son,” the mother said.

In many communities life-defining trauma is so common as to be almost seen as 'normal'. It may have been impersonal, since it seems random victims may feel always anxious because there was no way to predict it. Other people have been traumatized by those who, in more fortunate relationships, would be relied on to protect you. In those cases, the real betrayal can make it hard to develop loving, protective relationships or hard to know who to trust.
This means that traumatized woman are more likely than luckier women to become single parents, who as we know are more likely to be impoverished.
Trauma and Post Traumatic Stress Disorder are treatable in both adults and children--if the sufferers are actually SAFE now. The benefits of successful treatment extend to not only the individuals themselves, but their children (through improved mental health and well-being), their communities (through greater safety and stability), and their local economy (through lower social welfare and special education costs).
But I cannot stress enough that before can get better people have to actually be SAFE.