With an eye on his father’s bloodied face, Barry Jensen began punching numbers into his cell phone from the hospital emergency room.

His 90-year-old dad had fallen on a gravel driveway. His glasses were broken. His family worried that his bones might be, too.

Seats inside the Beaumont Hospital emergency room in the downriver Detroit community of Trenton were filled that day in late March. Several people lay on gurneys.

The son remembers thinking “it looked like a scene from a disaster movie, just on a smaller scale.”

A doctor might be free to see his father in another three, four, maybe even five hours, Jensen was told.

And don’t bother trying Henry Ford’s Health Center in Brownstown or its Wyandotte hospital, the hospital staffer warned — they were just as busy. As Barry Jensen listened, his wife used a water bottle and some antiseptic foam to dab her father-in-law’s face.

Similar scenes have been unfolding in emergency rooms across Michigan these days amid a steep rise in COVID-19 cases.

By Friday — even as the state administered its 5 millionth vaccine — some hospitals had returned to banning visitors, halting non-emergency procedures and implementing pandemic surge plans.

Six metro Detroit counties were reporting the most patients since the pandemic’s first, terrifying wave last spring. That meant there are fewer hospital beds available now then when 90-year-old Dean Jensen waited for hours in Trenton. (His family was able to get him treated at the Detroit Medical Center, where he received 18 stitches.) 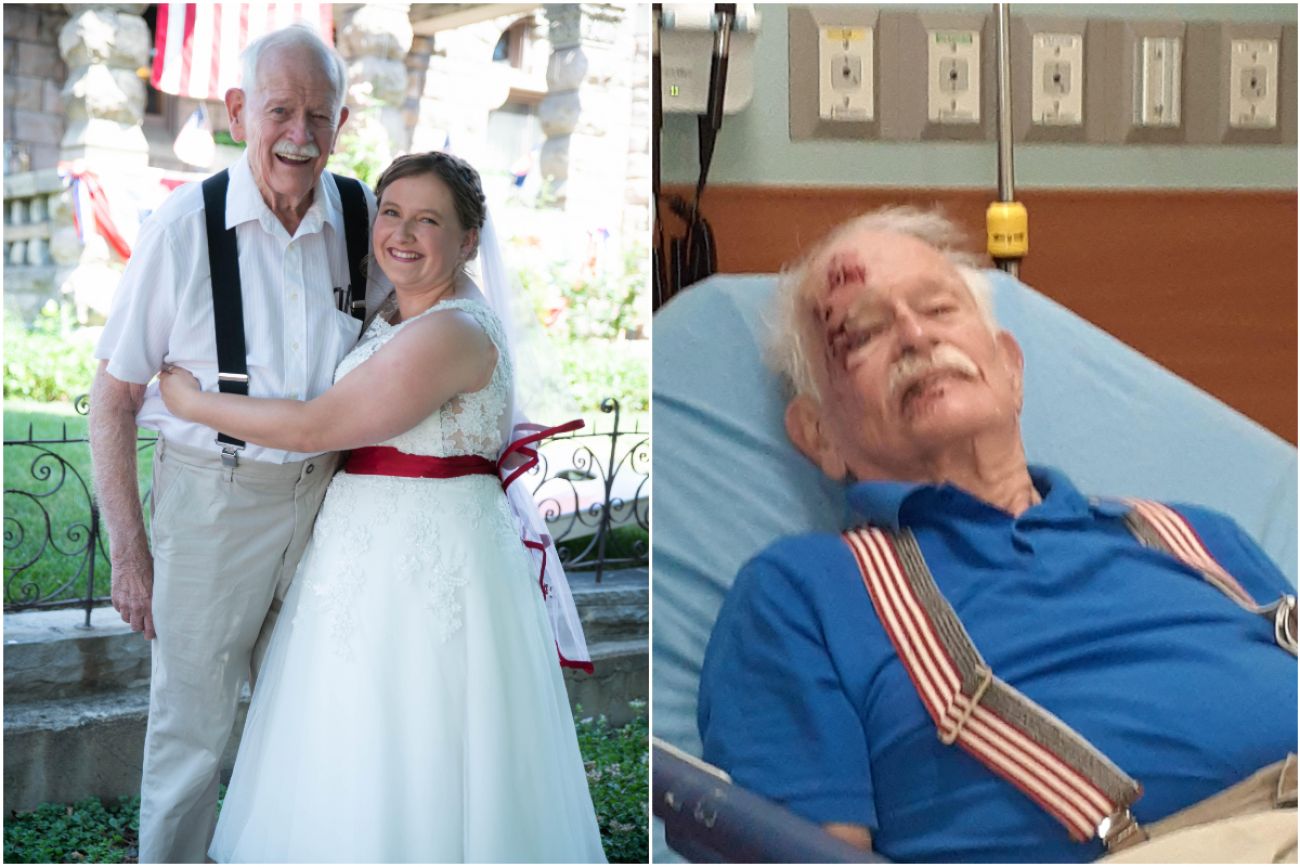 Dean Jensen, shown here in 2019 with his granddaughter and then again last month in an emergency room, fell on a gravel driveway, his son, Barry, said. (Courtesy photo)

The state was investigating 991 outbreaks and “broad community spread,” Khaldun said. It has been a week of horrid numbers, with Michigan leading the nation in new infections, hospitalizations and the percentage of people testing positive for COVID.

“What's concerning,” Spectrum Chief Operating Officer Brian Brasser said in an interview, is “that our trajectory looks very, very similar to what it did in the first part of October.”

Which is why Spectrum was among those canceling some procedures.

“Any time we make a decision to defer procedures like this, it comes not lightly because we recognize that the risk that is associated with deferred care,” Brasser told the Free Press. “But we also need to make sure that we're providing good, safe and effective care and we recognize that with the spike of COVID inpatient activity and just a general high census overall, it was important for us to do that.”

If case rates continue to climb, leaders at Beaumont Health, McLaren Health Care, Ascension Michigan and Sparrow said they will consider similar measures.
Meanwhile, public health officials, including those charged with contact tracing and other health efforts, are struggling to keep up, too.

“Our public health system is overwhelmed, we cannot keep up the pace, with all of our new cases that are coming in every day,” Khaldun said.

It is a dreaded deja vu, with a few notable differences, several health care workers told Bridge Michigan and the Detroit Free Press in recent days.

Gone is the fear of the unknown when the coronavirus first hit last spring and the frantic scramble for personal protective equipment.

But gone, too, are the stream of community-provided meals and well wishes that buoyed frontline workers in those early days.

And the camaraderie forged in the early chaotic days has started to crack in places, not necessarily in front of patients, but behind the scenes.

“There’s bickering amongst each other because they’re stressed out,” said Josephine Walker, a nurse at Ascension Providence Rochester Hospital, and a vice president of the nurses union, OPEIU Local 40.

It’s a familiar, bone-deep weariness as staff moves from patient to patient, said Jeff Morawski, a long-time nurse and president of the OPEIU Local 40, which represents nurses at McLaren Macomb Hospital in Mount Clemens as well as the Ascension site.

“There are cases, there are surgeries, there are procedures. The ERs are filled,” said “We are busting at the seams.”

And that inevitably means it’s patients who wait. And wait.

Colleen Rowland said she waited for seven hours Tuesday in a packed emergency room at Beaumont Hospital, Taylor — in pain from kidney stones and a raging urinary tract infection.

“It just didn’t seem like I was in the U.S. anymore,” said Rowland, 25, a respite care worker.

She said she arrived mid-morning at the emergency room after pulling to the side of the road in sudden pain and vomiting en route to her job. She was told at an urgent care facility she needed hospital care.

“You get used to being privileged, to not being in pain,” Rowland said. But “everybody in that room was miserable. There were people just keeled over in their seats over puke buckets.”

Colleen Roland said the pain shot up her sides and back from multiple kidney stones and an infection as she sat for about seven hours in a packed emergency room Tuesday while waiting for a hospital room. As she waited, friend Shermar Stewart, made calls to other emergency rooms. They, too, were packed. (Courtesy photo)

Rowland said she wasn’t able to get a hospital room until after dinner Tuesday, then had surgery Wednesday.

McLaren’s Chief Medical Officer Dr. Michael McKenna said the system’s hospitals are “definitely packed” both with COVID patients and others unlucky enough to require hospital care in a pandemic.

“When we're at full capacity, … we have had to temporarily hold people, like in the emergency room, but typically we're able to get them up to the floor” as other patients are discharged and free up beds,  he said.

“Everybody is really tight right now,” she said.

For intensive-care unit nurse Kim Stasik, 38, who works at Beaumont Hospital in Trenton, Monday was “hands down” the worst night in her 15 years in the profession.

“These people are sick,” she said. “They're young. They require a lot of care.” 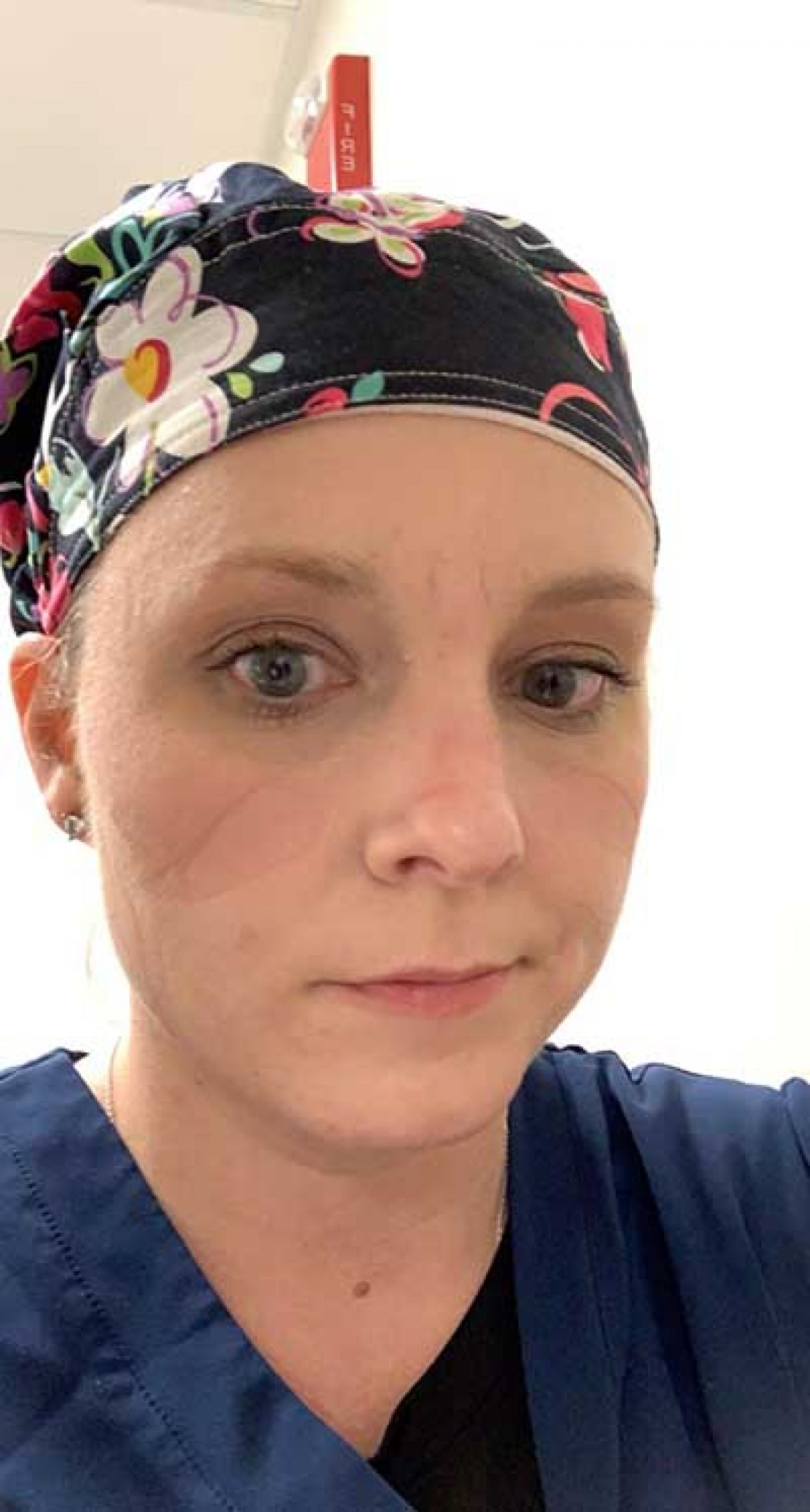 Kim Stasik, 38, an intensive-care unit nurse, has deep grooves on her face from the N-95 mask she wore during a brutal shift at the hospital Monday. She said the burden of caring for a swell of patients in this third coronavirus wave weighs heavily on her and other staff members, who, she says, are exhausted.

In the hospital’s intensive care, there is usually one patient for every nurse. When it’s busy, that can sometimes bump up to two patients per nurse. On Monday night, the ratio was 3-to-1.

“We are tired now," Stasik said. "People aren't picking up those extra shifts. The (pay) incentives that they are giving ... are just not worth it anymore. Yes, you can make that extra money, but at what cost?

Morawski, the McLaren nurse, agreed. The extra $20 to $50 an hour for some shifts is no longer worth it.

“People want to see their families again, they want to be home,” he said.

Stasik said her emergency department has been at capacity for three weeks straight.

“Every unit was full. Every unit had every bed full, including our ICU.

“We've had patients as young as 22,” Stasik said. “A lot of the people we’re treating are friends and family members of people we know.”

The Whitmer administration and others have noted that, despite the rise in cases, death rates have dropped among people who contract COVID-19, likely because patients tend to be younger than before vaccines became available, and hospitals have had a year to learn how to better treat the virus.

Then again, such conclusions may be premature. Deaths usually are a lagging indicator. Coronavirus spikes around the world have followed the same pattern since the start of the pandemic: infections first, followed by hospitalizations, and then deaths.

“Nothing correlates, and nothing makes any medical sense,” she said.

Hospital workers interviewed this week said that, in addition to an ebb in community support during the pandemic, they face an added squeeze these days as they treat COVID patients.

When hospitals canceled nonemergency procedures last spring, nurses and other staffers who worked in heart labs or with orthopedic patients were redeployed to help on COVID floors. They would serve as “runners” for their colleagues in patient rooms — fetching medications, supplies or more protective equipment when needed.

Now, staffers in non-emergency departments largely remain in their regular posts, despite the latest surge.

“The last couple of weeks it has been insane,” said Terri Dagg-Barr, another McLaren Macomb nurse.

Meanwhile, younger COVID patients are more likely to wait until the last minute to come to the hospital, rather than getting in touch with their primary care physician when they first feel sick or test positive, she and others said.

“I used to love my job,” Dagg-Barr said. “But right now it’s so frustrating.”

Why they return for another shift

Fresh out of nursing school, Miranda Macko, 25, walked into Beaumont Trenton in January, thrilled to be able to make a dent — she thought — in the pandemic.

The 12-hour days standing at bedsides and computers, she expected. She knew to invest in a good pair of Brooks shoes. 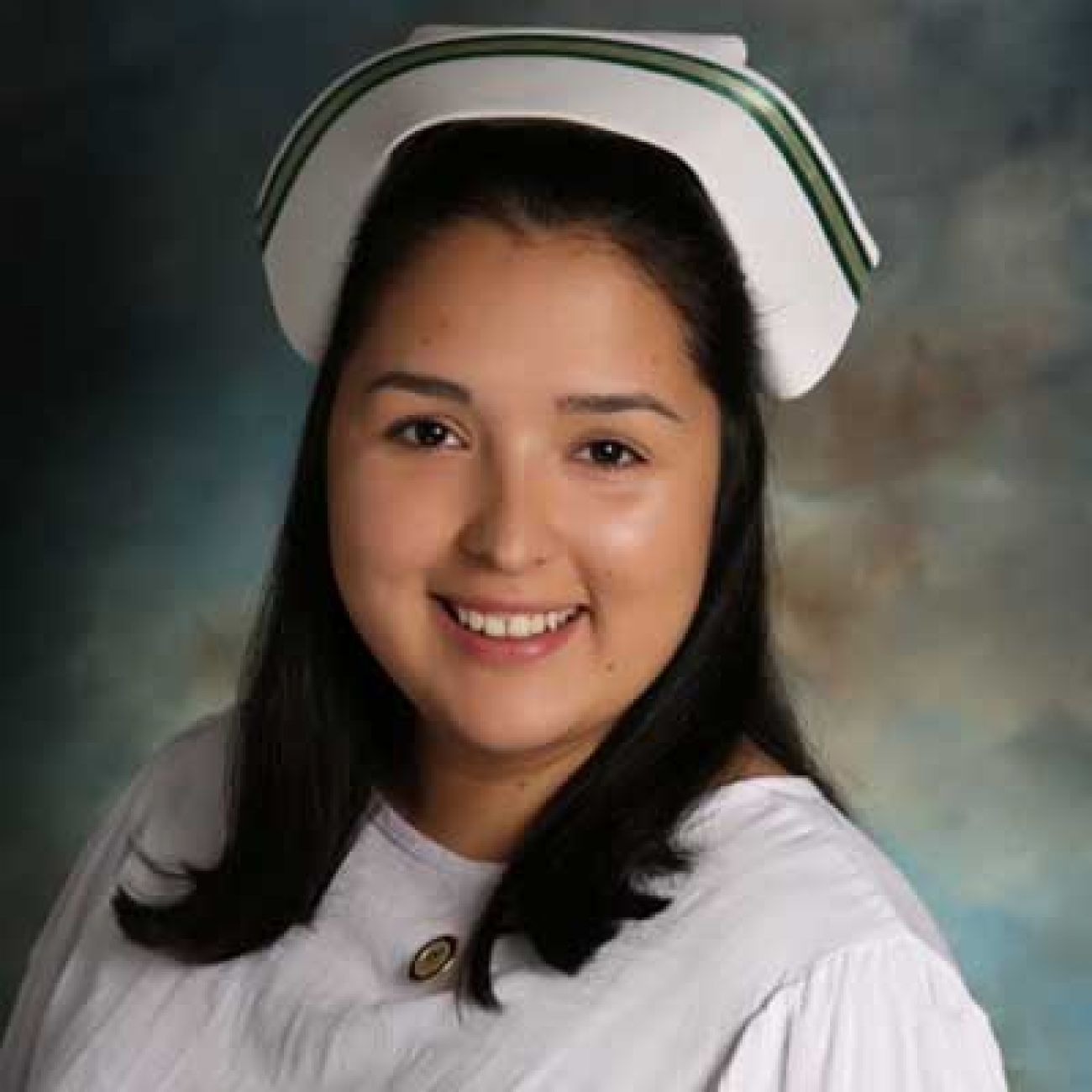 The knowledge that you’re saving lives, as well as a good pair of shoes, is critical on 12-hour shifts, said newly-minted nurse Miranda Macko. (Courtesy photo)

But the constant turnover of patients this month has been unexpected and exhausting. Medical care is more than charts and pills. A good nurse takes time to hear patient concerns, to understand their pain, and to tend to their anxiety, she said.

It’s difficult when there is so little time, she said.

“Once we clear a room and get that room disinfected, the room is filled again,” Macko said. “We have patients coming into our ER and waiting for hours.” “I just wish people would mask up. This isn’t over.”

Even so, Macko and others said they remain thrilled to show up each shift, and thrilled even more when a patient becomes a survivor. 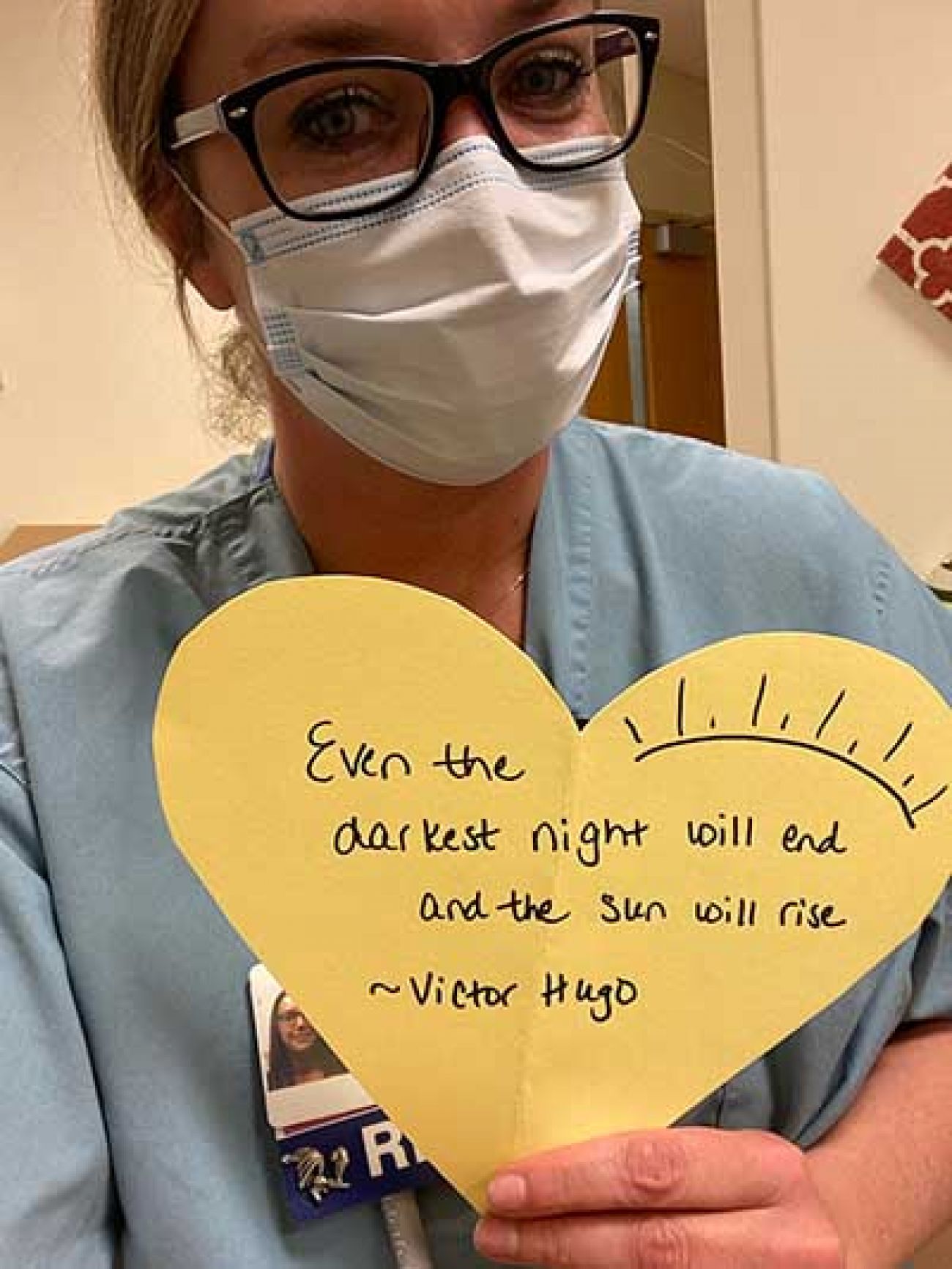 Robin Cannon said, for all the long hours, appreciative patients make it “makes weary worth it.” (Courtesy photo)

And, there are still notes, calls and texts from those they have helped, said Robin Cannon, clinical nurse manager for Memorial Healthcare’s COVID unit in Owosso, west of Flint.

Sometimes, the messages come directly to her cell phone — calls from grateful survivors or loved ones.

“To hear that feedback,” Cannon said, “to know they're recognizing what an excellent job that’s happening, and just being able to care for the patients — that's what makes weary worth it.”