Michigan’s economy has long centered around manufacturing — especially autos. But reliance on a single industry produces boom and bust cycles. That’s certainly true of recent Michigan history. The state lost hundreds of thousands of manufacturing jobs during the Great Recession. Yet the auto industry has also helped drive economic recovery in recent years.

On some key measures, Michigan’s economy has returned to or surpassed pre-Great Recession levels. The state’s Gross Domestic Product (the value of all goods and services produced) was 2 percent higher in 2015 than in 2006 — and nearly 14 percent higher than 2010. Total employment grew by nearly 10 percent from 2010 to 2015. Total personal income grew by 13 percent over the same time period.

The state has diversified its economy and reduced unemployment during the current economic expansion, though Michigan hasn’t yet regained all the jobs it lost in the Great Recession. Manufacturing, while still among the state’s dominant industries, has lost some ground as sectors such as health care and professional and business services have grown.

Related: Where they stand: Michigan governor candidates on college affordability 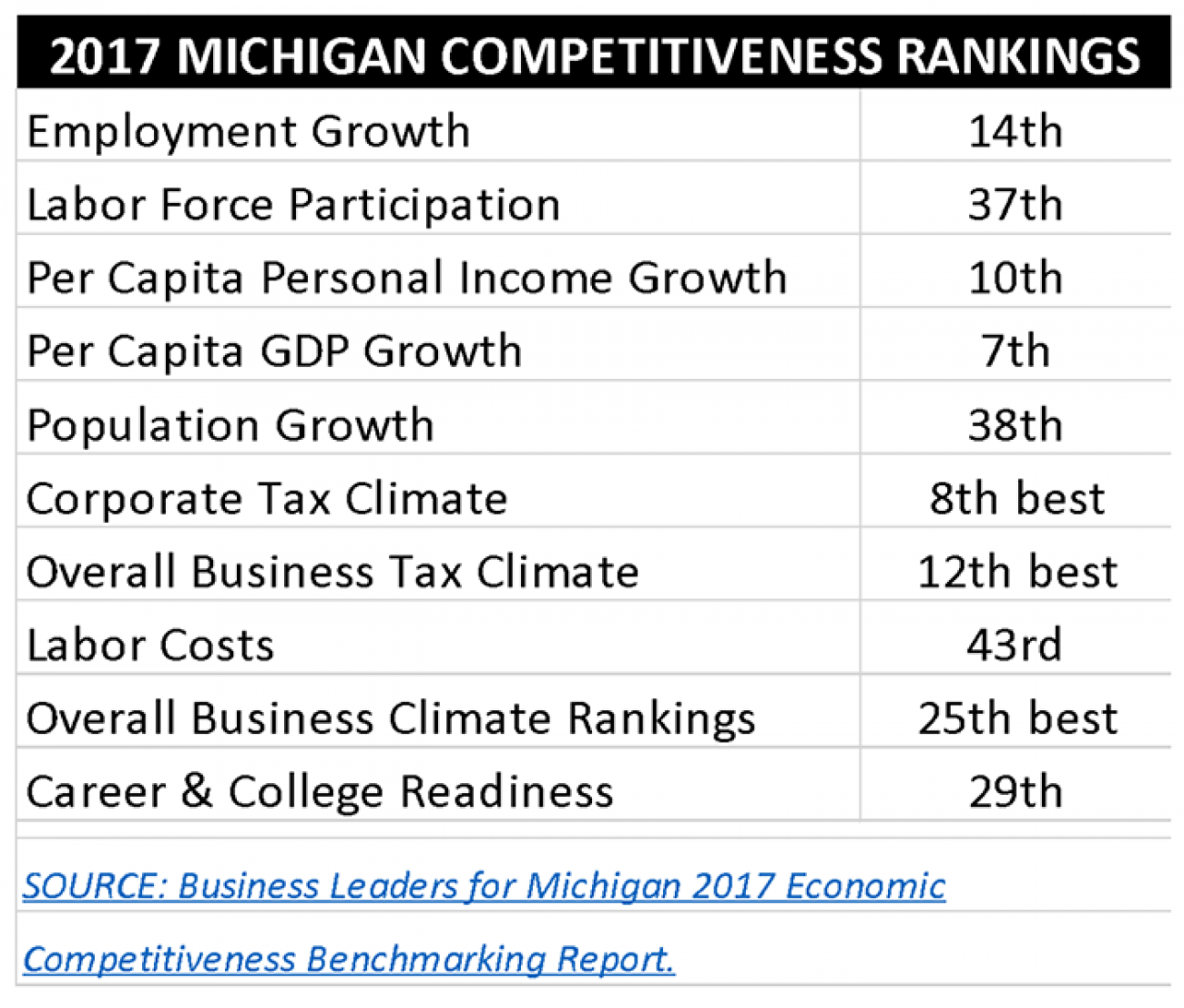 Schools struggle to improve student performance, and many companies say they have trouble finding enough skilled employees to fill job openings. Infrastructure is failing, which poses problems for businesses that rely on adequate transportation to move products and healthy communities to lure workers.

Michigan’s unemployment rate stood below 5 percent at the end of 2017, roughly mirroring the national rate. That’s far better than the 15 percent, worst-in-the-nation unemployment of 2009. Yet Michigan’s labor participation rate is low, with many workers having given up looking for jobs over the past decade. And wages haven’t grown as fast as some economists believe they should, given the length of the current recovery.

Governors often get credit for a good economy, and blamed for a bad one. But government leaders don’t create jobs. Their role is to create the environment in which business can grow. Gov. Rick Snyder and the Michigan Legislature have passed a wide range of measures (some of them highly controversial) with the intention of improving Michigan’s business climate. Those changes include:

Michigan is not yet a top-10 state when it comes to jobs, income and the economy, according to Business Leaders for Michigan, a roundtable of statewide CEOs.

Competing Ideas for the Future

The next governor and lgislature elected in November 2018 will face a bounty of recommendations on how to improve the Michigan economy going forward.

Yet those newly elected leaders entering office in January 2019 may also face a ticking clock. Leading economists openly wonder how much longer Michigan’s recovery (mixed as it may be) will continue – and when the next recession looms.

One of Michigan’s biggest challenges to business attraction is talent. The state ranks 37th for labor force participation among residents 16 and older. Michigan has an estimated 6,700 job openings in the skilled trades annually through 2022. Yet since 2010, the vast majority of new U.S. jobs have required some postsecondary education — and just 39.4 percent of Michigan adults have at least an associate’s degree.

Recovery has been uneven in recent years across the state. Among urban areas, Grand Rapids has been a recovery star — 90,000 new jobs from 2012-2015. Ann Arbor, the Detroit metro region, Lansing-East Lansing, and Kalamazoo also have fared relatively well. Other old manufacturing cities like Flint and Saginaw have continued to struggle.

Michigan’s rural communities are buoyed by jobs in natural resources-based industries such as timber and mining, agriculture, and tourism. But sparsely populated communities lack the necessary infrastructure, namely high-speed internet access, that can attract new residents and help businesses compete in a 21st-century economy.

Real estate markets have improved in the past several years. But it’s a long climb back to pre-Great Recession levels. From 2008 to 2016, statewide property values fell by billions of dollars. Flint lost three-quarters of its taxable property value. Detroit lost 60 percent. Statewide, some 1.4 million residents live in communities where taxable property values dropped by more than half over that eight-year period. On the bright side, agricultural property values saw a considerable rise over the same period.