A small-town Michigan newspaper said goodbye. Then readers stepped in.

SALINE – It was 7:10 a.m. on Aug. 5 when Saline residents learned they were losing their local newspaper.

The Saline Post, an online-only publication, had covered this small Washtenaw community like a soft, warm blanket for five years. It filled a void left when big media corporations no longer saw profit in reporting city council meetings and traffic accidents. But Tran Longmoore was exhausted. He had worked seven days a week for most of those years as a one-man media band. He could handle the hours, he said, but he couldn’t handle the bills that were piling up.

Early that morning, he typed a message to readers. “Hello friends,” he started. “I’m ceasing publication of The Saline Post after five years. For various reasons, I simply failed to generate the revenue I required to continue publishing.”

Sitting at his dining room table, he hit a button on his Acer laptop, posting the announcement on the newspaper website and social media.

Then, something unexpected happened.

“I started getting texts within 20 minutes,” Longmoore said.

“I got a call from someone telling me, ‘You can’t close your doors, ‘cause no one else is covering Saline.’” On Facebook, community members asked what they could do to keep the Post alive.

In 24 hours, Longmoore had enough money to keep publishing. Saline’s community newspaper had been saved by, of all things, the community itself.

Longmore said he is more comfortable writing about the Friday night Saline Hornets football game than talking about the future of journalism. But the 46-year-old admits that what happened to his little newspaper may have implications beyond this Washtenaw County town of 9,000.

Communities around Michigan are losing their local newspapers, and industry leaders seem at a loss as to how to save them. Could the salvation of journalism come not from industry focus groups and page-view algorithms, but from readers themselves? 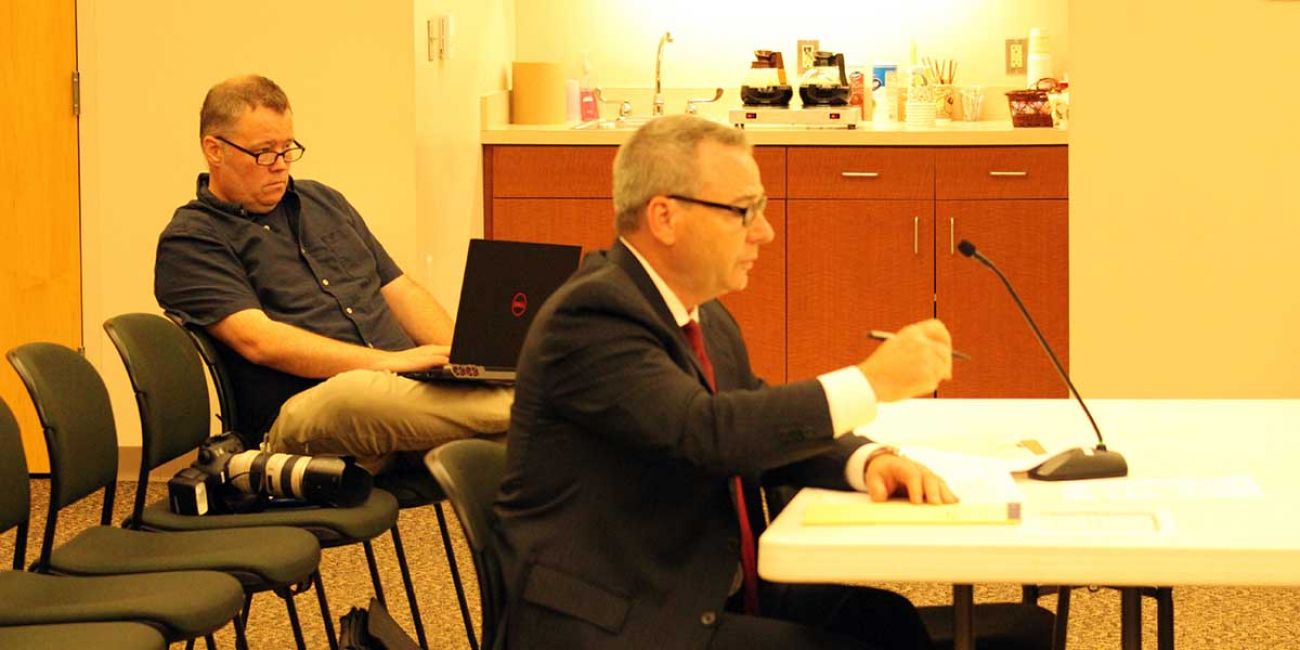 It all seemed unlikely this summer, when The Saline Post found itself in the same financial straits as many newspapers. Newspaper circulation peaked in 1990 at 62 million papers sold daily across the country. Pew Research estimates that number has dropped by almost half in 2016—a little over 34 million.

Advertising revenue, which has always paid the bills at newspapers, hit its peak in the mid 2000s, but has since dropped by almost half—from $49 billion a year to just over $25 billion in 2012.

“It’s not exaggerating to say that all kinds of local reporting — from day-to-day city hall coverage to world-changing investigations like the one celebrated in the movie “Spotlight” — is faced with extinction,” media columnist Margaret Sullivan wrote in the Washington Post recently.

Like most towns, Saline had a traditional, hometown newspaper, The Saline Reporter. It closed up shop in 2014.

The website that was supposed to provide local news to that community survived just a year before it too was closed when its corporate owners said they were “exploring strategic alternatives.”

Longmoore, already a veteran of small-town Michigan newspapers in Milford and Blissfield, began publishing the Post in 2013. It’s not a glamorous life. Longmoore is the Saline Post’s only full-time employee, working about 55 hours a week. He writes most of the articles, edits all of the content that comes through, and runs the web traffic while managing the advertising.

He works in the guest bedroom of his home, at a local coffee shop, and even at a table near the front of Busch’s grocery store. “Anywhere there’s Wi-Fi, I’ll work,” Longmoore said. “There was a fire this morning,” Longmoore said during a recent interview. “A drunk driver drove through the park the other night. If anyone is going to have it, it’s going to be on my website.”

Often, he’s the only journalist at city council and school board meetings.

“When you see the metrics (indicating readership of an online story), you think, why bother?” Longmoore said. “But most journalists are civic-minded. What’s the old saying, about journalism being democracy’s oxygen? You have to provide the people who are interested in the information they need to decide who they’re going to vote for, or which city council members to call on certain issues.”

“The reality is having a media presence, having someone who is not affiliated with the district able to ask the tough questions publicly and share that information, is important,” said Saline Area Schools Superintendent Scot Graden.

When it looked like that media presence was going to disappear, the community banded together to save it.

In his letter to readers in August, Longmoore said he needed commitments for an additional $1,000 a month in donations and advertising than he’d had previously, and $2,000 for immediate improvements to the paper’s equipment.

To Longmoore’s surprise, community members took action. “When you’re working by yourself, you don’t know what people think,” he said. “You don’t know if they value you.”

He soon found out.

“When he was close to going out of business, I suddenly thought, ‘How else would we know what’s going at city council meetings or the school district?’” said Lori Hall, who donates money monthly to the newspaper.

“It’s out of sight, out of mind,” said Jared Falkowski, a high school teacher and donor to the Saline Post. “You want to be able to consume the news of the day, but also you don’t concern yourself honestly with how this product is getting funded. And the people behind the scenes obviously have to make a living as well.

“Having a local publication or reporter in town, I personally just find it so important,” Falkowski said. “Obviously, it’s where people get a lot of their local news. But it’s a place where community members can voice concerns, too.”

Because of this sentiment, it may not be surprising to hear that advertisers rarely ask Longmoore how many people are reading his articles.

“No one ever asks when they buy an ad, ‘How much traffic do you get in a month?’ I think my advertisers are there because they want their ads next to the kids playing sports, next to the things going on downtown.”

“Advertising, in the long run, isn’t going to fund journalism,” Longmoore said. “It’s going to have to be readers of journalism, like it was in the old days when people subscribed to newspapers.”

The Saline Post is free, so “subscribers” have been replaced by “donors” who view local news not as a commodity, but a public service to support, like parks and streets. It’s a different mindset for the community, and for Longmoore.

“By covering all these meetings and the field hockey team and the school board, you’re showing the community you are standing by them. You’re not just there to make money off of clicks. You’re providing a community service.”

The Saline Post is going to make money when 2017 is over, Longmoore said, though he is uncertain how much. He’s planning a fundraiser for next August to build on donations already raised. If everything works out, the Post’s doors won’t be closing anytime soon.

“I used to think, it’s free, how much can you expect,” Longmoore said. “Now that people are putting their money in, I feel like I have to raise my standards. People are invested now.”