Cheers for Dr. Fauci at comeback University of Michigan commencement

Dr. Anthony Fauci is the chief medical officer to President Joe Biden. He urged University of Michigan graduates to speak out against the “cacophony of falsehoods and lies.” (Bridge photo by Isabel Lohman)
May 7, 2022
Isabel Lohman (Email)
Talent & Education
Michigan colleges and universities, Coronavirus Michigan

ANN ARBOR — About 4,100 University of Michigan graduates came back to the Big House Saturday to celebrate the traditional college commencement they never had because of COVID-19.

A small band of protestors gathered outside the stadium, but inside, the graduates and many of their families and friends in the stands, offered a standing ovation to the featured speaker and primary target of the protestors, Dr. Anthony Fauci.

University of Michigan 2020 and 2021 graduates craned their necks to take photos of Fauci as he walked to the stage, and cheered when he was presented an honorary degree.

In his speech, Fauci encouraged the graduates to expect the unexpected, embrace leadership and stand up against “egregious distortions of reality” and the “cacophony of falsehoods and lies."

“Do not shrug your shoulders and accept the normalization of untruths,” said Fauci, the Biden administration’s top medical adviser.

“Because if you do, lies become dominant and reality is distorted. And then truth means nothing. Integrity means nothing. Facts mean nothing. Our country will not thrive if we … do not push back vigorously against moral ambiguity.” 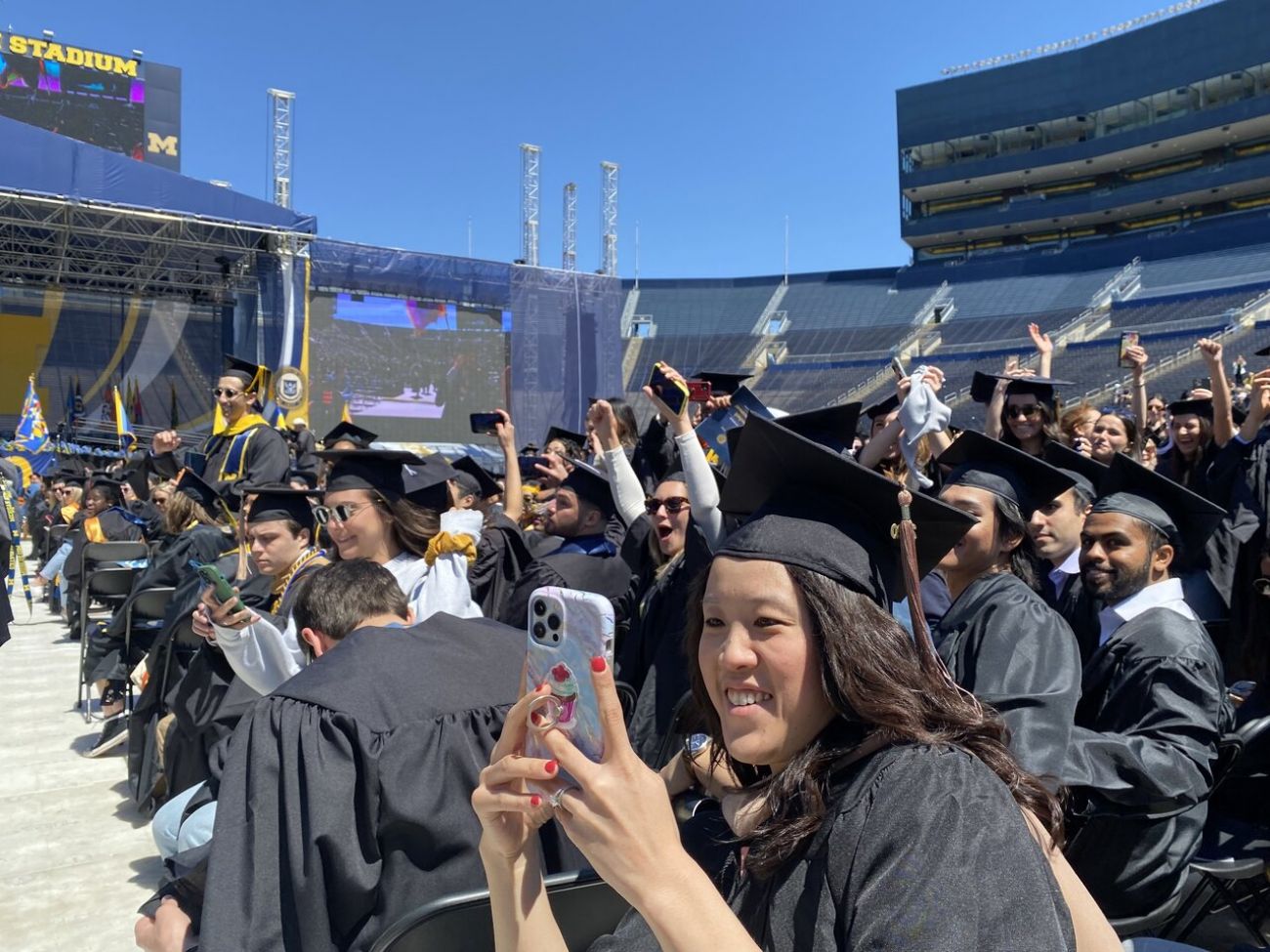 Graduates take photos of Dr. Anthony Fauci as he approaches the stage for the 2020 Comeback Commencement. While a few Fauci critics protested his presence outside the stadium, his presence was cheered for inside the stadium. (Bridge photo by Isabel Lohman)

Fauci’s presence was yet another reminder of the conflicting experiences and sentiments among Michigan residents during the pandemic. While most embraced masks and vaccines, others viewed the mandates and emergency orders as an effort by government officials — with Fauci and Democratic Gov. Gretchen Whitmer as chief villains — to weaken personal freedoms.

Saturday’s event was a make-up celebration for the university’s 2020 and 2021 graduates, whose commencements and final semesters were curtailed by the pandemic.  The 2020 commencement was virtual, while access to the 2021 one was limited because of the virus.

Graduates cheered when Fauci was given an honorary doctorate degree. But they were there to cheer their own accomplishments as well, and those of their friends. Inside the stadium, graduates lined up to take photos before the ceremony started.

Lankeu Muteleu drove from Grand Rapids to attend the ceremony because he wanted to note his master’s of public policy degree and celebrate that “science works, education works” with COVID. He was keen to attend a graduation in the U.S. since he had performed his undergraduate studies in Kenya.

“I love Dr. Fauci, he’s very good in his field, I know there are people who don’t. I’ve seen anti-vaxxers out there but I’m like, ‘Yeah, those guys are in the wrong place today,’ because most of us people in here, I think, understand the importance and the role Dr. Fauci played being in the middle of the research for (the) vaccine and guidance and everything. So I’m excited, if I could go out there and shake his hand, I would.”

Another graduate, Maya Ballester, drove 13 hours from Kansas to be at the ceremony and said she wasn’t shocked by the protests.

“I’m not surprised because Fauci has been a really polarizing person as of late, especially for certain Republicans have really hated him so I kind of understand (the protest) might happen. But at the same time, I’m like ‘We’re the class of 2020, we graduated two years ago technically, we have been through enough, like can we not have a protest going on right now?’”

About 30 to 40 demonstrators were outside the stadium. Several held signs that included “Fauci for prison” while others drove by honking horns, including the Trump Unity Bridge truck featuring several signs, including “Build the wall.”

Among the demonstrators was former state Republican senator Patrick Colbeck, a U-M grad who said Fauci’s appearance was a  “disservice” to students and an embarrassment for others who graduated from the university.

Also present: Lena Epstein of Bloomfield Hills, a Republican candidate for the U-M Board of Regents, who greeted graduates and their families at the corner of Main and Stadium.

“Dr. Fauci has put so much harm on the American people through his mandates,” said another protestor, Maija Hahn, who raised questions about COVID vaccines. In fact, the U.S.-approved vaccines have proven safe and effective in reducing virus cases and preventing infections from worsening.

One person entering the stadium in a graduation robe yelled at the group to “stop trying to ruin our day.” A car passenger yelled “shame on you” at the protesters.

Several graduates expressed displeasure with the protests while acknowledging the demonstrators’ right to be there.

“It just felt really uncomfortable and honestly, it just felt like we weren’t being congratulated, so that sucked,” said Neetu Singh, a first-generation college student who flew back to Michigan for the event from California.

“I know everyone has the right to protest and I respect that,” she said. “But I just wish it was a little more controlled so that it was easier for the students to get in and park and have a good day basically without being yelled at.”