FLINT — Flint Community Schools Superintendent Kevelin Jones said he hopes this new school year will be the last in which the district uses a year-round school calendar, an approach intended to avoid long, knowledge-draining summer breaks.

Flint’s experiment with a “balanced calendar” was well-intentioned, Jones said. But there is not enough community buy-in and students who needed the most help were not attending extra sessions scheduled during breaks in the modified school year. 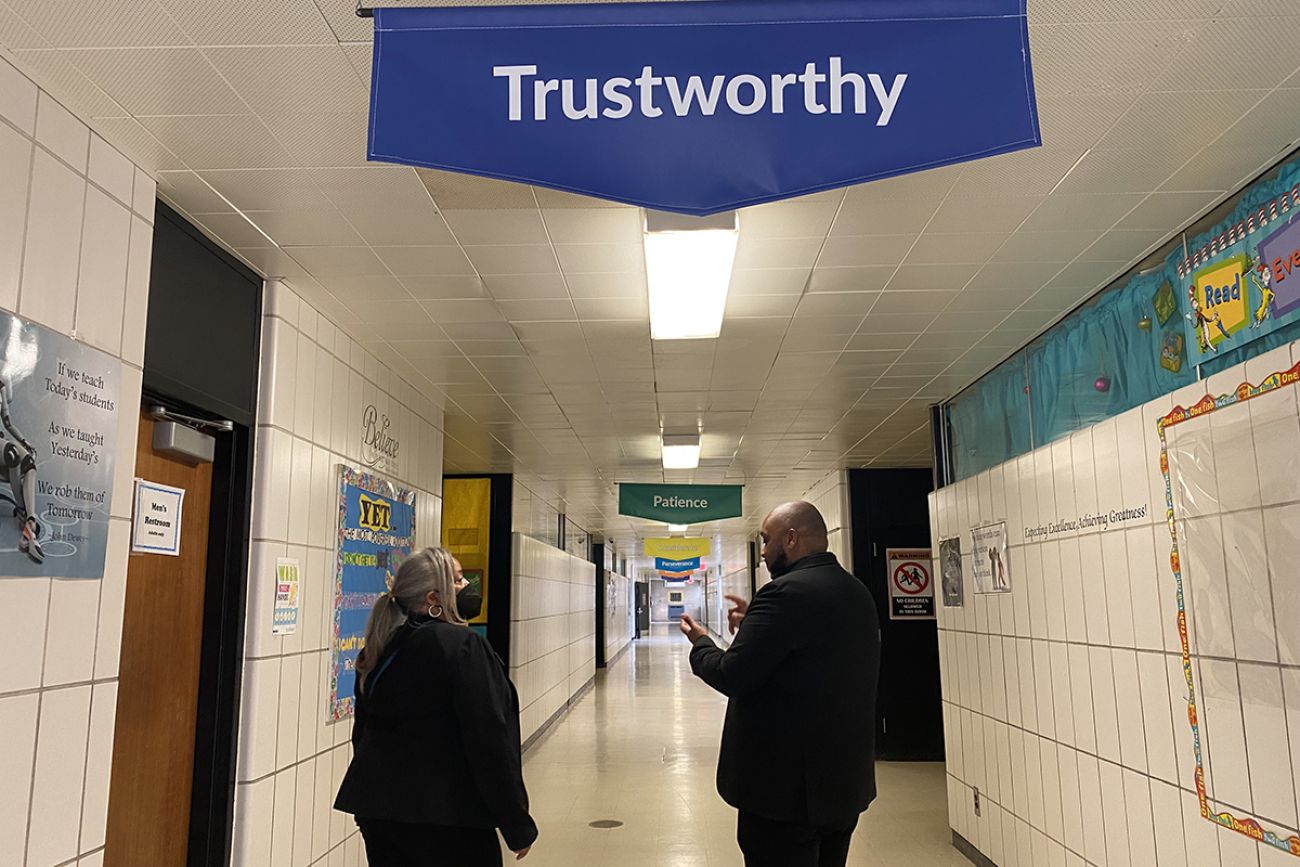 “We're looking at the data and the data doesn't show that our balanced calendar is doing what it needs to do for our scholars,” he said. “We would rather have a robust, eight-week summer program because our scholars love our summer program, and really, really hit the ground running in September in a traditional calendar.”

“So there's no reason to continue doing something that's not working.”

Proponents of year-round schooling say the number of schools and districts adopting the system is on the rise. But Flint would be at least the second Michigan district to abandon a balanced calendar. In January last year, Kalamazoo Public Schools said it was ending a year-round pilot program for two elementary schools.

Bryan Beverly, director of K-12 Outreach at Michigan State University’s College of Education, told Bridge Michigan that balanced calendars only work as well as districts are able to get support from the community.

“Michigan is an interesting place to think about (a) balanced calendar,” he said. “Because Michigan summers are great. But it's a finite amount of time where you're able to really enjoy the outdoors.”

The balanced calendar still gives students time off around common holidays like Thanksgiving or Christmas, but year-round districts like Flint can also offer “intersessions” — periodic breaks when students have the option to come in for extra academic help.

This school year, Flint, with more than 3,000 students, has four- or five-day intersessions slated in September, October, February and April.

Advocates for balanced calendars say they help reduce “summer slide” — the amount of learning that is lost when students go 10 to 12 weeks without classroom instruction.

That loss tends to be greater for lower-income students, whose families are less likely to have the resources of more affluent families to provide a structured summer schedule. As a result, teachers routinely spend their first weeks of the fall term re-teaching some of the issues and concepts students learned the previous year.

That long breaks produce learning loss is not in dispute. But there are mixed results on whether a balanced calendar is the solution. Some studies have shown that schools that commit to year-round schooling produced higher achievement, while other research found no increase.

Harris Cooper, professor emeritus at Duke University, has studied the balanced calendar for 15 years and told Bridge it has some promising results but should be studied more.

“I think there’s certainly consensus that it does no harm and the evidence suggests that students who are struggling in school — in particular students who are of lower means or don’t speak English at home or have learning difficulties — benefit most from the modified calendar,” Cooper said.

But he said he isn’t aware of any studies that analyze the calendar’s effect on student attendance and student discipline issues. He also wants to see research that follows the same group of students for several years to determine if the positive effects a student experiences after one year are compounded over time.

Other researchers have also called for further study of the issue.

“It may be that a balanced school year calendar should be thought of as an instructional tool. Meaning that in the hands of skilled educators, balanced calendars produce results,” a 2018 white paper by the Stark Education Partnership, an Ohio education nonprofit, said.

The Michigan Department of Education does not track how many Michigan schools use a balanced calendar, department spokesman Bill DiSessa said in an email.

But David Hornak, executive director of the National Association for Year-Round Education, which advocates for year-round school schedules, said he is seeing more schools move toward exploring balanced calendars rather than away from it. He said he thinks that’s because school leaders are looking for creative ways to make up for learning loss during the pandemic.

Hornak is also the superintendent of Holt Public Schools, south of Lansing, where two elementary schools have long used balanced calendars. Holt is using two calendars in the 2022-2023 school year. One will be a “blended” calendar that includes aspects of the balanced and traditional calendar and there will be a “bond” calendar for two schools undergoing renovations.

Michigan requires schools to have 180 days of instruction. Both traditional and balanced calendars achieve this. Hornak said some students would be academically OK with only 150 days, other students are right on track with 180 days but others need 220 or 230 days.

A balanced calendar helps schools and teachers prepare students who need more help while reducing the amount of time teachers have to cover old ground in the fall, Hornak said.

Akron-Fairgrove Schools, in the crook of Michigan’s thumb region, uses a balanced calendar for its 345 students. Superintendent Diane Foster said the district typically offers extra academic help during breaks in October and February but not a lot of people attend. Still, she told Bridge that teachers and families appreciate the balanced calendar for other reasons.

Akron-Fairgrove started the calendar during the 2017-2018 school year. Foster said the district was beginning to see positive academic results but then COVID-19 hit.

While some critics of balanced calendars say it interferes with summer family vacations, Foster said parents appreciate being able to vacation during less expensive times of the year. They also found that it’s easier to find childcare for six weeks during the summer rather than 12 weeks. And grandparents or other family members are sometimes more willing to pitch in during a shorter summer break.

Foster said the district’s first year with the balanced calendar included a break at the end of October. But the district noticed discipline referrals were high before the break. The district tweaked the schedule, eventually landing on a break during the second week of October.

“It’s a right break at a right time,” she said.

Cooper, the Duke professor, said teachers and the businesses that employ parents of school children also need to buy in. Teachers often use summers to earn college credits for advanced degrees, or to earn extra money to supplement their teaching income.

Colleges that provide those advanced degrees would have to accommodate a different,  non-summer schedule of classes.

Foster said she included teacher input in Akron-Fairgrove from the get go to ensure the program would be successful.

“I did start talking with our staff first,” she said, noting that “if we couldn’t move together, there was no sense of moving any further.”

Jennifer Smith, director of government relations for the Michigan Association of School Boards, told Bridge she isn’t aware of other Michigan districts moving away from balanced calendars.

“The conversations are more toward the balanced calendar more than away,” with much of the talk focused on allowing students to return to school before Labor Day, she said.

Michigan requires school districts to submit a waiver request if they want to start school before Labor Day. State Rep. Pamela Hornberger, R-Chesterfield Township, has proposed a bill that would eliminate the requirement that classes begin after Labor Day but it has not gotten a full floor vote yet.

Both the school board association and Michigan Association of Superintendents & Administrators support the bill, while state tourism and business groups have in the past opposed August starts because they can dampen the state’s tourism economy before the summer’s last holiday weekend.

Peter Spadafore, executive director of Middle Cities Education Association, said out of the group’s 28 local school districts, all but three are starting before Labor Day this year. His organization represents school districts that have about 140,000 of the state’s public school students.

Hornak, the Holt superintendent who supports year-round schools, said he understands that changing to shorter summer breaks is a shift from how many parents grew up.

“I also believe that those same folks are longing for their children to have the lazy summer days they had growing up,” he said. But he said that, generally speaking, students are not spending their entire summer outdoors like children did when he was young. And families can still take vacations throughout the year, too.

But Jones, in Flint, said year-round school isn’t working for Flint families. The schedule is a problem, but “COVID has messed a lot of that up as well. So I won't blame it all on the decision of a balanced calendar because I've seen it work in the United States in other areas. But it's not working for us.”

COVID was also cited as a complicating factor by school leaders in Kalamazoo, which began piloting the year-round model in two of its elementary schools in 2018 in a partnership with the state. The schools began to see improvement in student performance in 2019 and were honored by the Michigan Department of Education the following year, according to coverage of the pilot program by Mlive.

But the negatives were stark: Both elementary schools suffered enrollment declines of more than 40 percent. Childcare was an issue and, because only two elementaries were on a balanced calendar, families with children in multiple schools were frustrated by the conflicting schedules, MLive reported.

The success of a balanced calendar is ultimately dependent on whether school officials are on the same page with a host of other players: teachers, local businesses and parents.

Beverly, of MSU, said Flint’s roll out of the balanced calendar during 2019-2020 school year “kind of fell flat” and he thinks it likely left “a bad taste in the mouth of parents and students.”

“(O)nce you launch something and it doesn't really resonate at the beginning, it's hard to bring people back into the fold,” he said.

Jones, the Flint superintendent, said the district’s intersessions are currently staffed by teachers who volunteer, because their contract does not require they work the extra hours. They are paid, but it is an optional program.

“We're talking to our unions, we're talking to our staff and most are on board to change that (balanced calendar) model,” Jones said. “We still have to talk to certain unions about what we can do and negotiate how that goes. It’s certainly not working for our scholars.”